Ivy is a beautiful addition to any home, whether it's inside or outside and with so many different types of ivy, there's an option suitable for everyone's tastes. Many people use ivy outdoors as a groundcover instead of using grass, or they allow it to grow up the side of their home. The greenery of ivy makes homes look more interesting and often offers a homey cottage-like feeling.

They also serve as wonderful house plants for those who don't want them to grow outside. Many varieties require minimal sun and water, making them ideal options for beginner plant lovers.

It may seem like there aren't several kinds of ivy from a distance, but take a closer look, and you'll see that there are many varieties. English ivy, or Hedera helix, has the most variety within that genus. Some varieties are dark and glossy, while others are light with a matte finish.

When you pick out an ivy to grow at home, it's important that you pay attention to if that variety is evergreen or deciduous.

Very few varieties of ivy are deciduous. Boston ivy is probably the most popular deciduous ivy. Many people love to grow this one because of the bright red leaves it gets before it goes dormant in the winter.

How to Care For Ivy

Most ivy varieties don't require a lot of sun or water. In fact, many ivies thrive in the shade and are used as groundcovers under trees where nothing else seems to grow. Still, you'll need to water it if it's indoors or if it doesn't rain often.

Most ivy prefers even watering. Water the plant thoroughly so that the ground is no longer dry. The plant should have well-draining soil, so the roots don't stay in the water. Allow the top of the soil to dry out before you water it again.

Some varieties, like English ivy, can become drought tolerant once the plant is established and has thick vines. Even though the plant may tolerate less water, the colors of the leaves probably won't be as vibrant as they were before.

Ivy should have indirect sunlight as much as possible, although there are a few exceptions to this rule. If you're growing ivy indoors, keep it in an east or north-facing window so it will receive bright light that won't burn up the leaves.

If you're growing ivy outside, plant it near a tree, fence, or building so it can spread out and climb freely and stay protected from the sun. If you live in a hot climate, your ivy must have plenty of shade.

When ivy is well cared for, it's likely to grow out of control. Indoor ivy will need to be trimmed frequently unless you'd like it to spill over the pot and onto the floor. You can also give it a trellis to climb up.

To trim ivy, you can snip off the vine you no longer want or trim it to your desired length.

Ivy may take over your property if it has the right conditions and is left untouched. If ivy is taking over your lawn, you can mow over it with a lawnmower just as you would with grass.

Be Mindful of Toxicity

Most ivies are toxic when they're eaten by both humans and animals. Some varieties may produce sap that will cause an allergic reaction when you touch it.

If you have children or pets who want to munch on ivy leaves, it may not be a good plant to have at home. 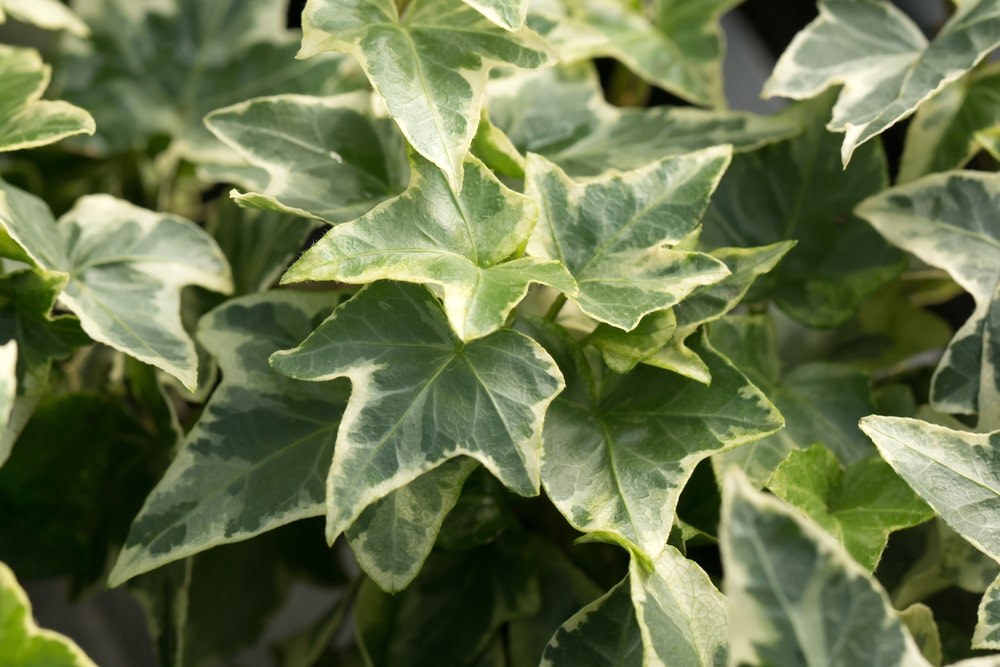 Adam ivy is a member of the Hedera helix family. It has thick vines and dark, glossy leaves when it's mature. The leaves are much lighter when the plant is young. The plant will grow yellow flowers and black berries. Every part of this plant is toxic, including the sap it produces. 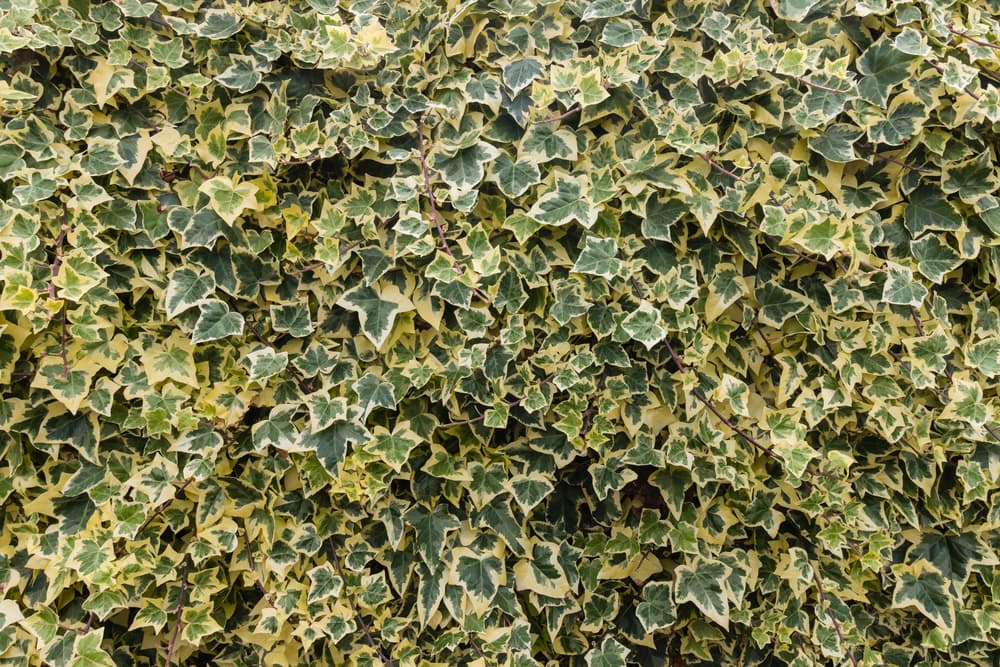 Algerian ivy is native to the western parts of Africa and thrives in warm temperatures. It can grow in full sun and full shade, but it prefers partial shade. The leaves are green in the middle and yellow on the edges. If it doesn't have the proper conditions, leaves will be mostly green. 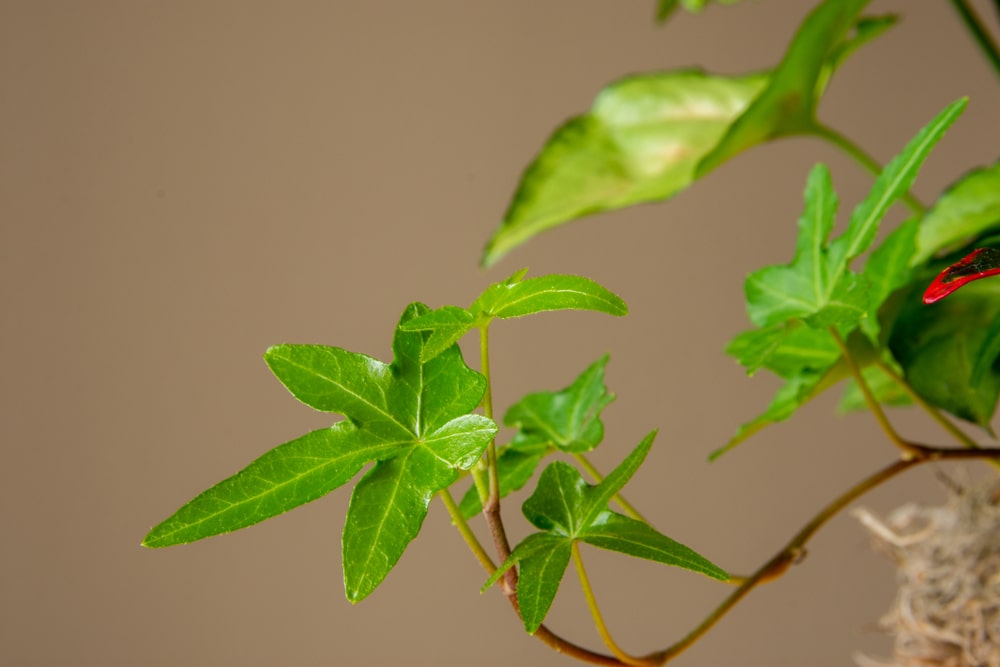 Asterisk ivy gets its name from the star-shaped leaves that are bright, glossy green. This Hedera helix variant is often kept as an indoor plant in a hanging basket since it grows well in the shade. 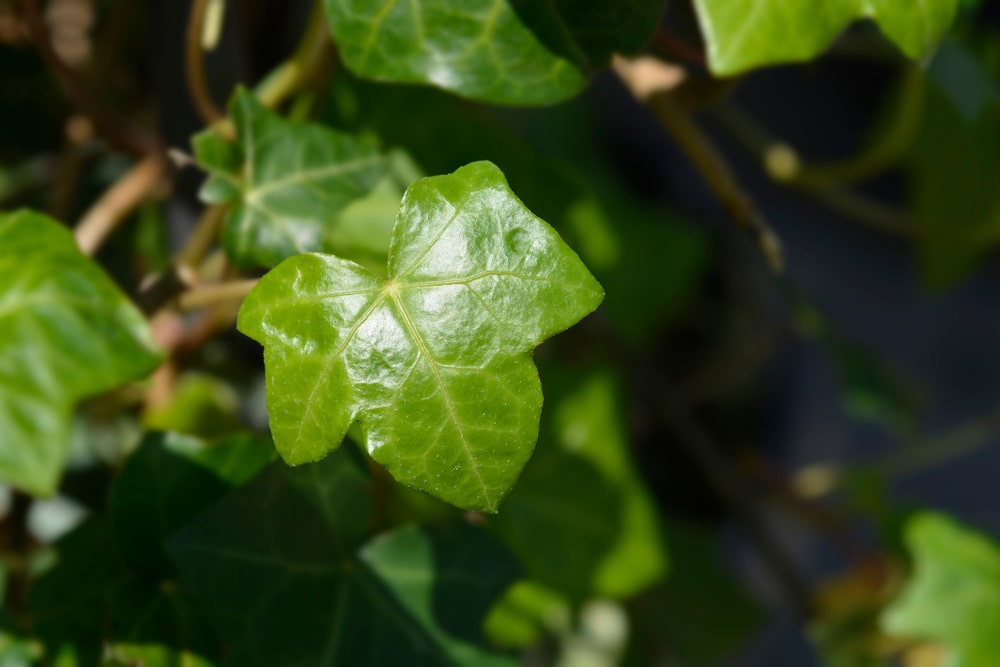 Atlantic ivy broad leaves and boasts a bright green. This shade-loving plant will easily climb walls, trees, and fences when it has the right conditions. It's an evergreen ivy that will need frequent pruning if you don't want it to take over your property. 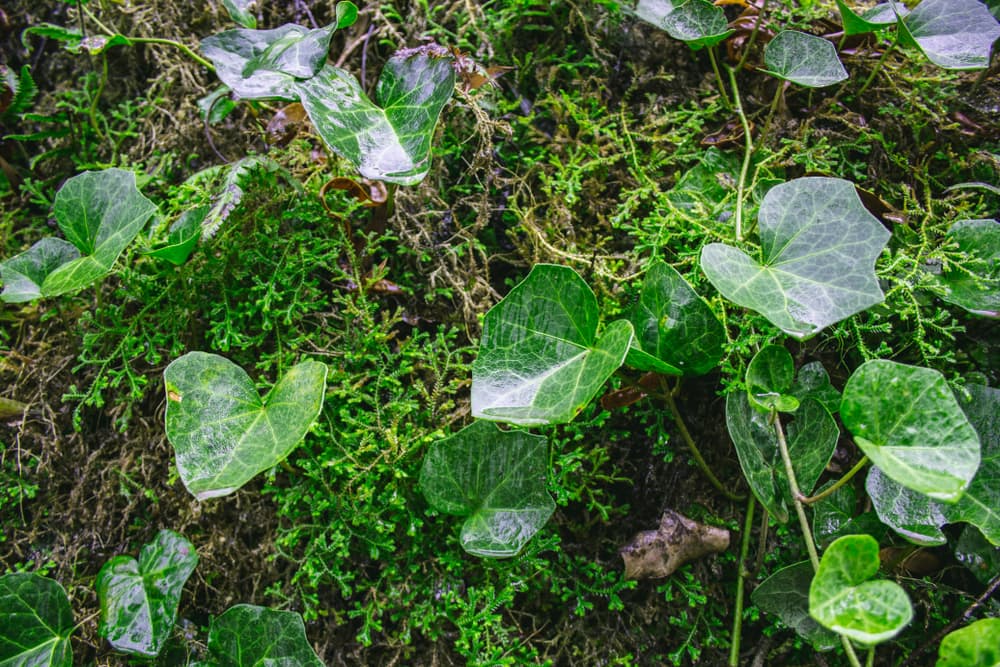 Azores ivy is native to the Azores Islands west of Portugal. This evergreen ivy prefers lots of shade since its native climate is a cloudy, dense forest. If given tall enough trees to climb, it can reach up to 98 feet (30 meters). If it isn't given anything to climb, it will spread out as a groundcover. 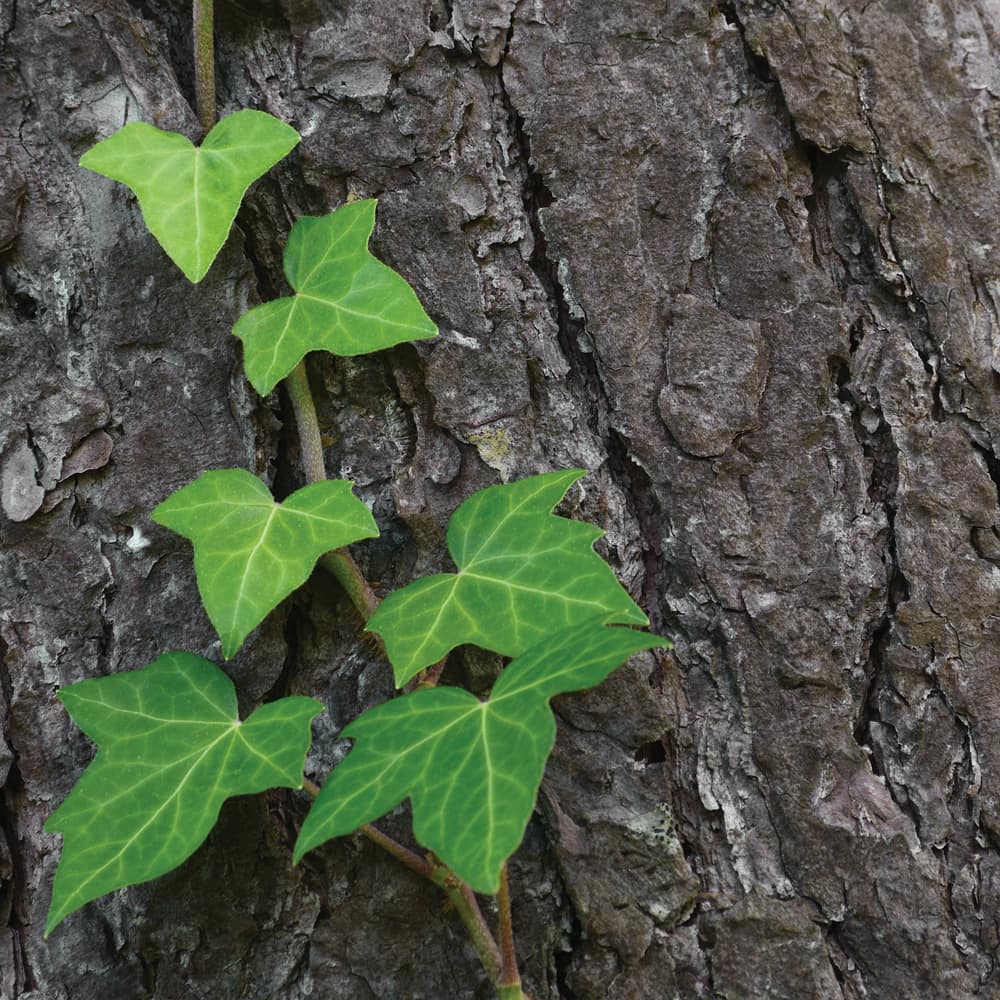 Baltic ivy is a spreading variety of Hedera helix and often won't climb higher than about 1 foot (30 centimeters). It can spread up to about 20 feet (6 meters), making it the perfect choice for large shady areas that can't grow many plants. 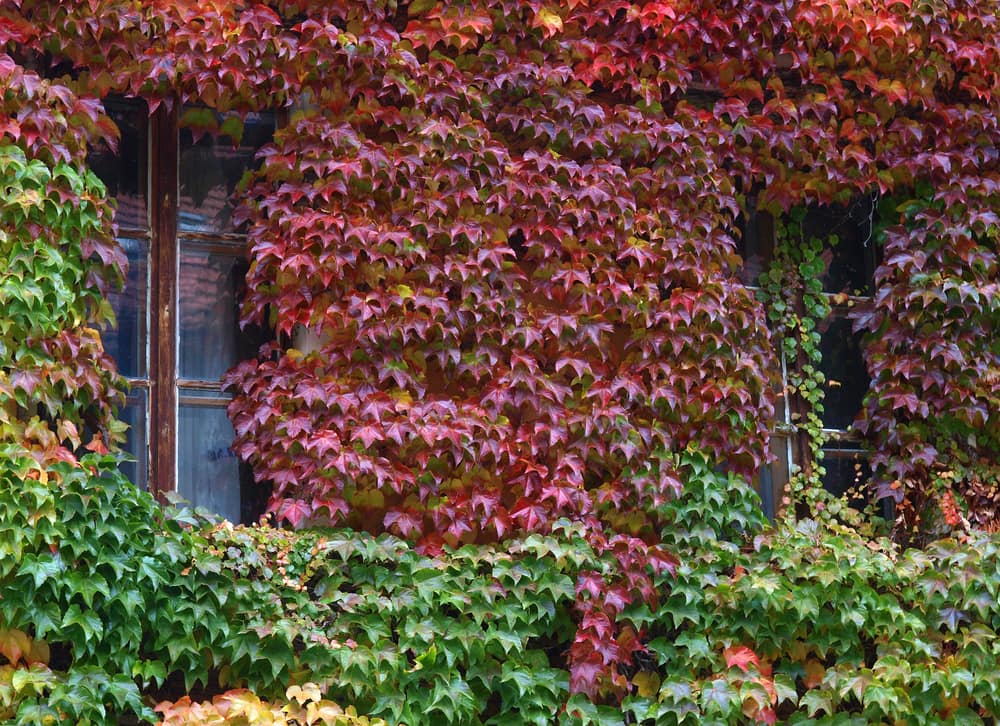 Boston ivy is an aggressive plant that will rapidly climb up anything it can. It's a deciduous ivy that will turn a beautiful bright red in the autumn before all the leaves drop. The vines will remain in place and will come back in the spring. This fast-growing plant works well as a house plant but will need frequent pruning. 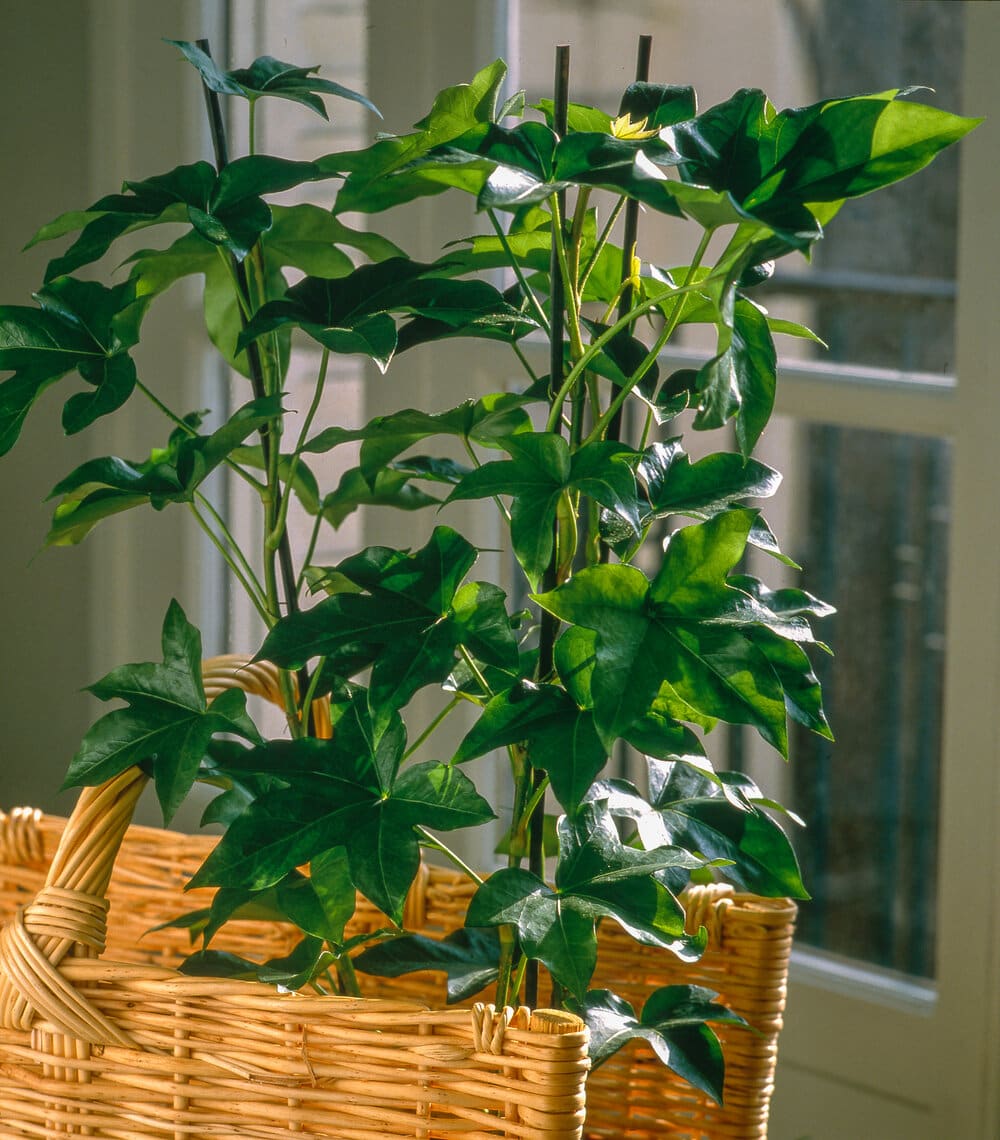 This plant is a hybrid between the Hedera helix and Japanese Fatsia. The plant will grow as a climbing vine or as a groundcover if left alone, but it can also be trained to grow like a shrub with constant pruning and training. This plant works well as a house plant and will grow flowers in the fall. 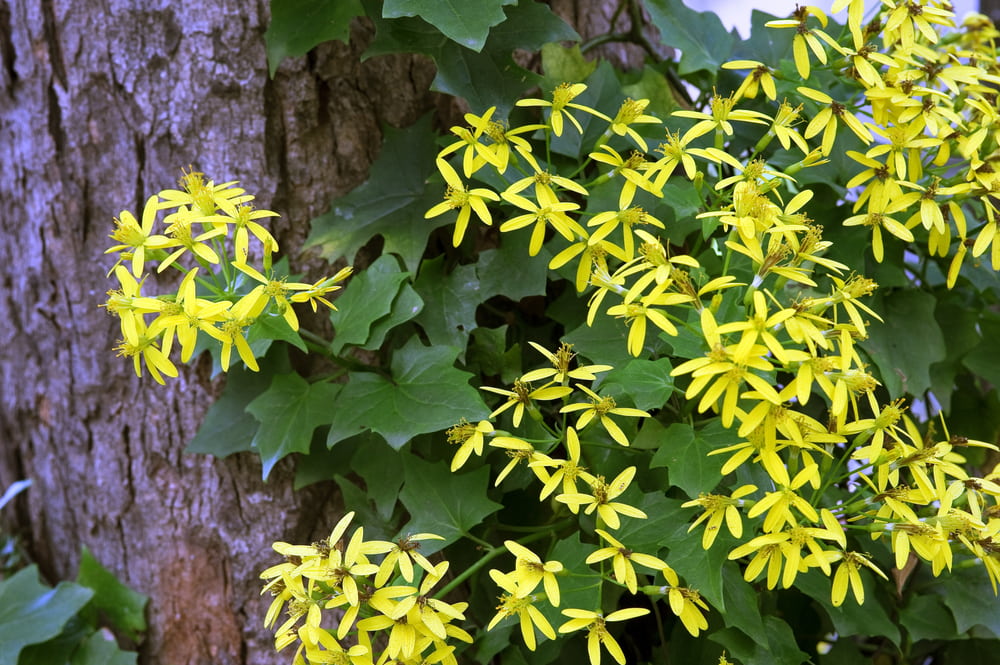 Cape ivy is native to South America but has become invasive in parts of the United States and in Australia. It grows dark green leaves and clusters of yellow flowers. It prefers to climb rather than spread out. This plant may take over the other plants in your garden if you plant it outdoors. 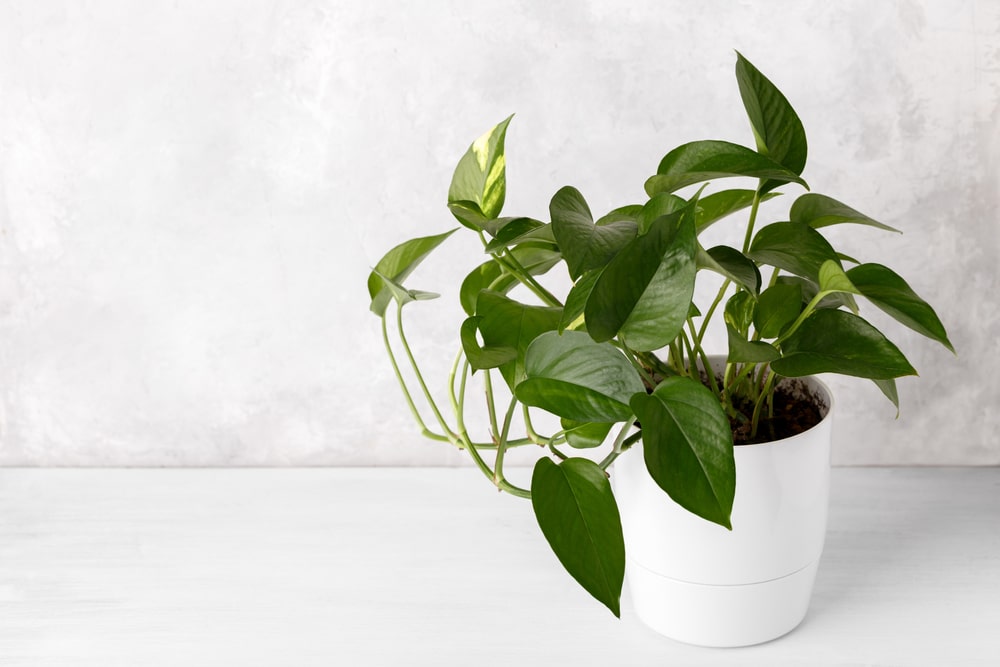 Devil's ivy is also known as Golden Pothos and is typically favored by beginner house plant growers. The plant prefers medium indirect light, but it can withstand low light for a long time. It doesn't often have pest problems, and vines can reach up to 40 feet (12 meters) in a hanging basket. 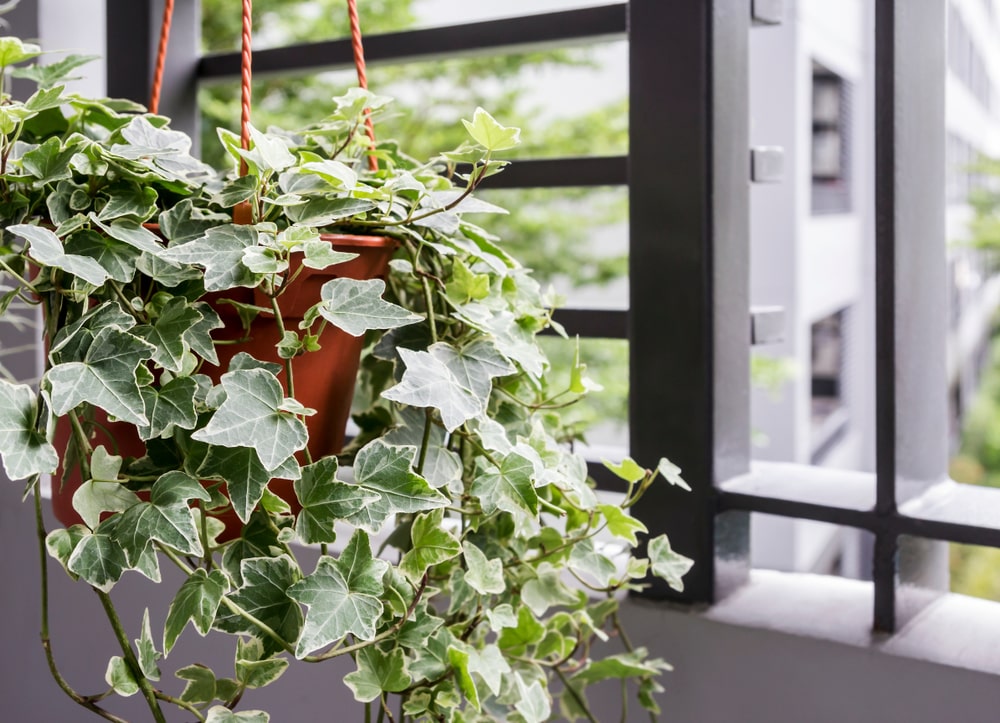 English ivy is the common form of Hedera helix. It prefers lots of shade and will grow slowly but will begin to take over anything in its path by the third year. It's an evergreen plant that will continue to grow all year long. 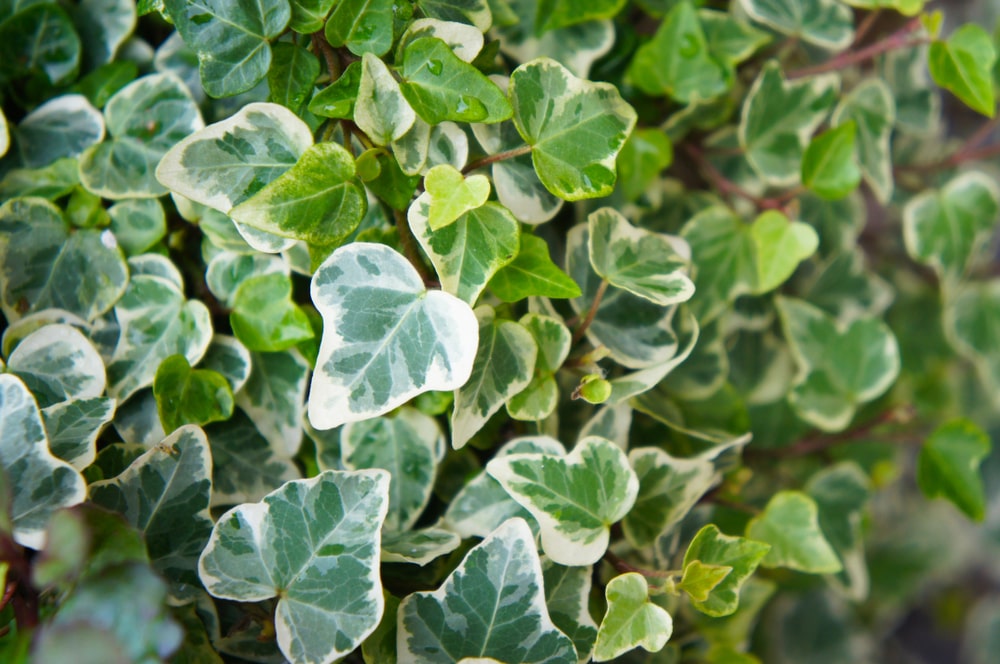 Another variety of Hedera helix, glacier ivy, can be identified by its muted green leaves with a white border. The plant is slightly drought tolerant but will have the best color when it has enough water. 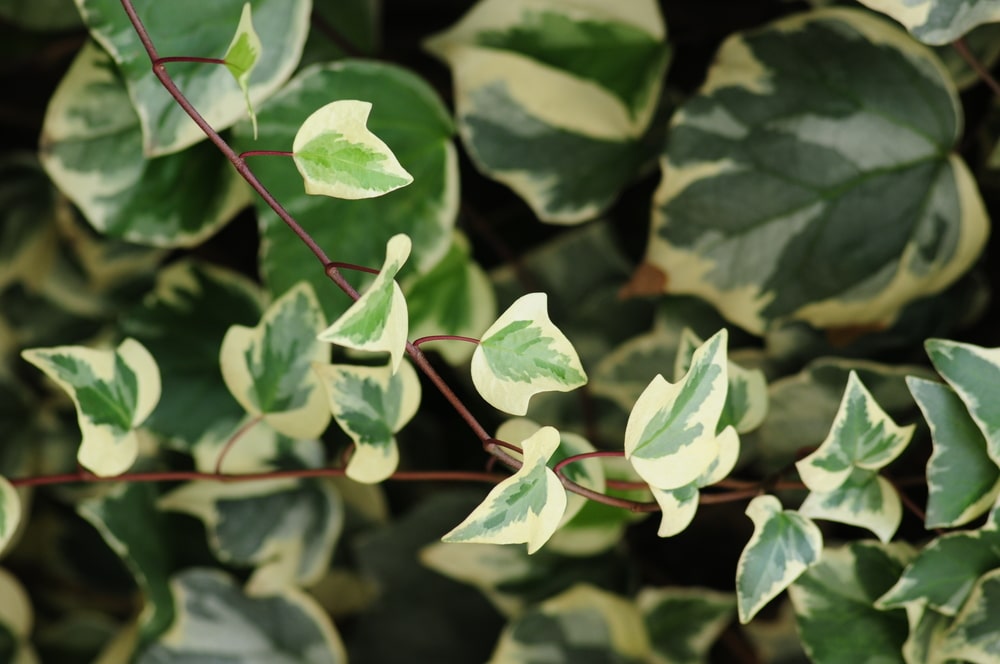 The Gloire de Marengo ivy has variegated foliage with greyish-green and creamy yellow leaves. It can grow in partial shade or full sun and can grow up to 131 yards (40 meters) after about 10 years if it isn't pruned. 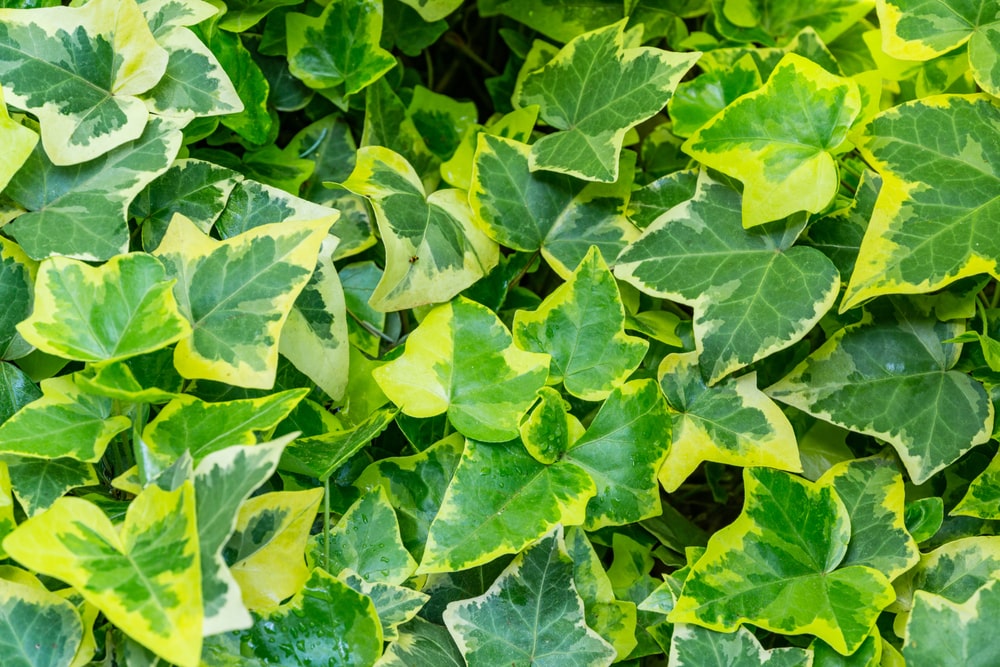 Gold child ivy is another variety of Hedera helix known for its bright yellow border and green center on the leaves. This ivy can grow outside in mild climates, but it's typically preferred as a houseplant. 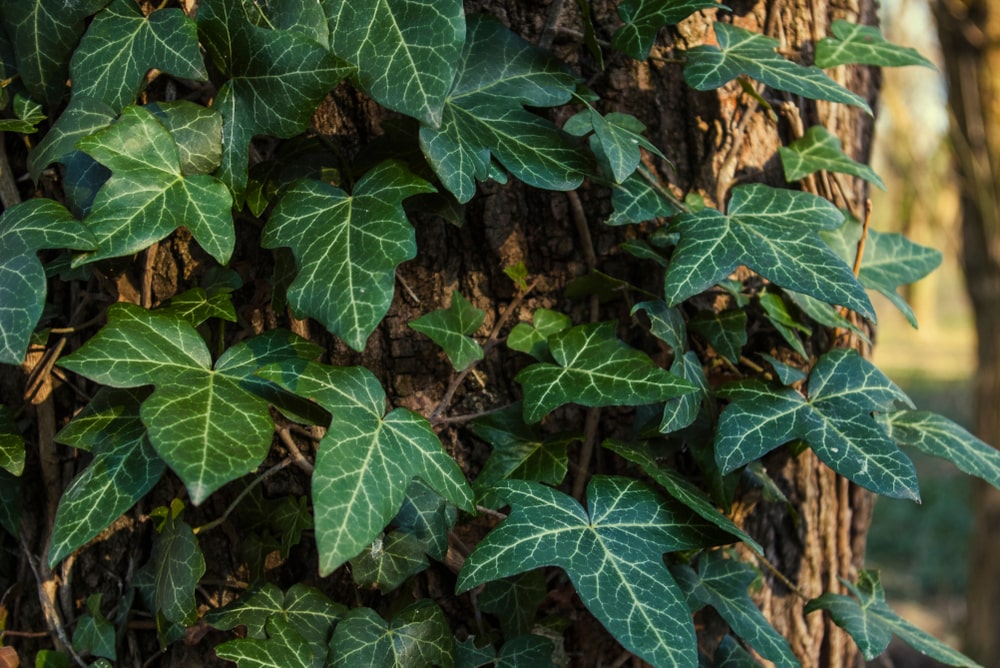 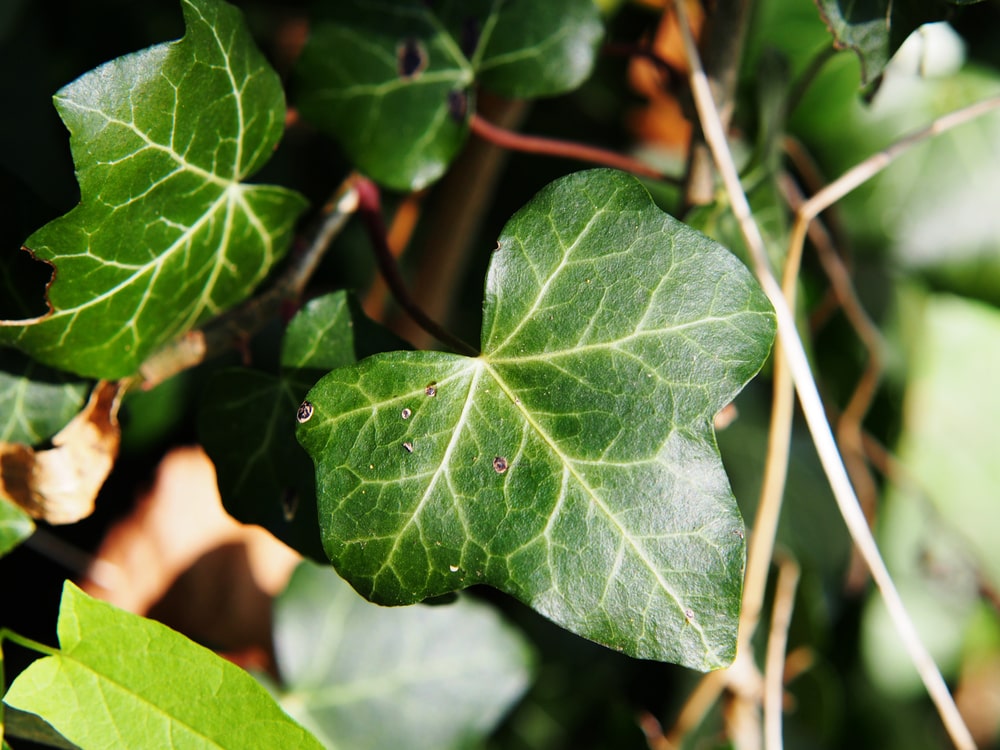 Irish ivy will climb up almost any surface or will spread out as a groundcover if it's unable to climb. The plant is invasive in some parts of the United States and will be difficult to get rid of once it's established. This plant can survive in full shade or full sun, which aids in its invasiveness. 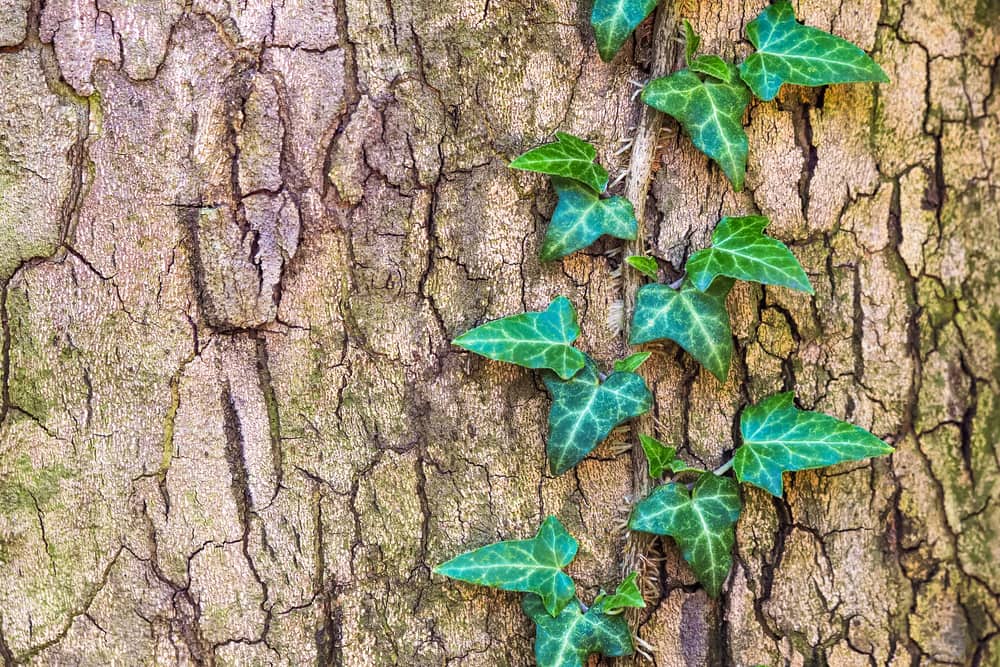 Ivalace ivy is a unique Hedera helix variant. It has five points that curl around the edges, making it stand out among its Hedera helix siblings. The leaves are glossy and range from light to dark green with white veins. The plant will climb or spread out wherever it can and can also be grown as a house plant. 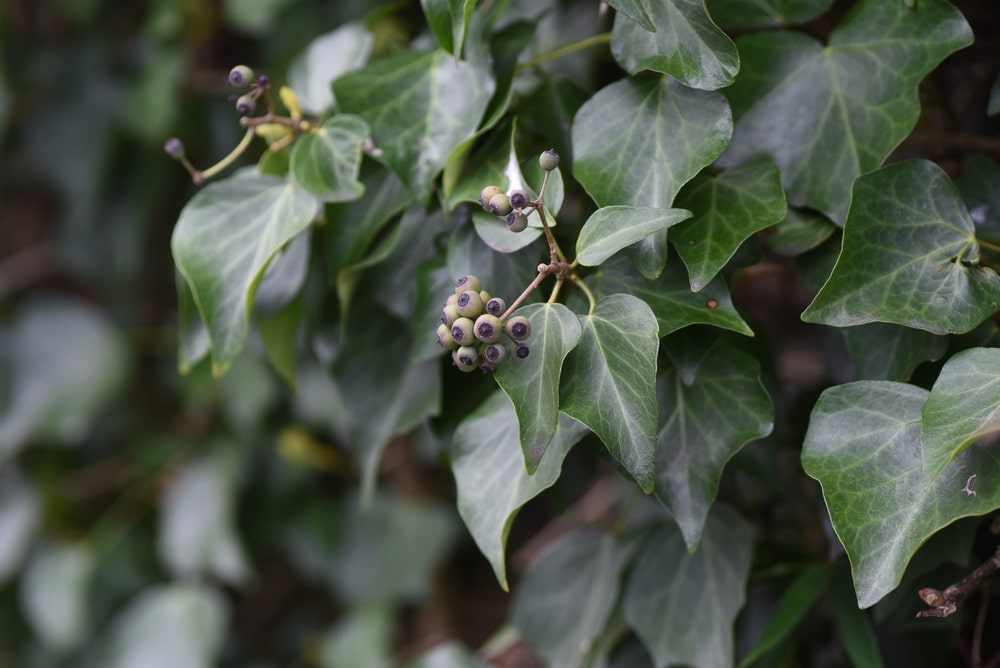 Japanese ivy has dark green leaves with purple stems. It can adapt to almost any light condition but grows the best in the shade. It produces small berries, but they're toxic and shouldn't be eaten. 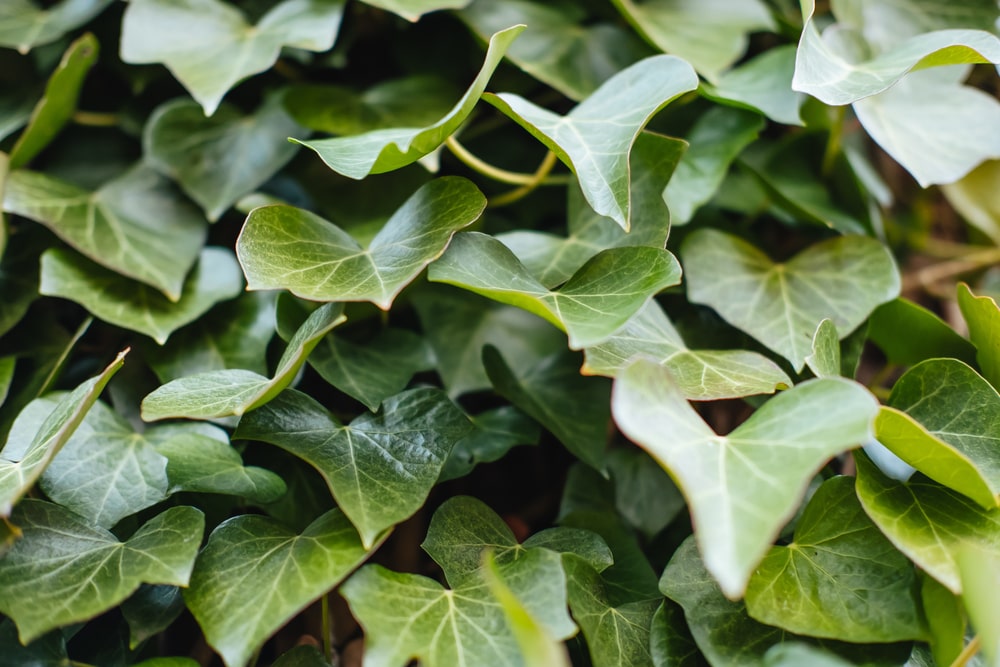 Madeiran ivy is an evergreen plant that can grow vines up to 98 feet (30 meters) tall. The plant has dark green leathery leaves and brown stems that sometimes look purple. It can grow in rocks and on trees in its natural habitat, so expect it to climb almost anywhere you put it. 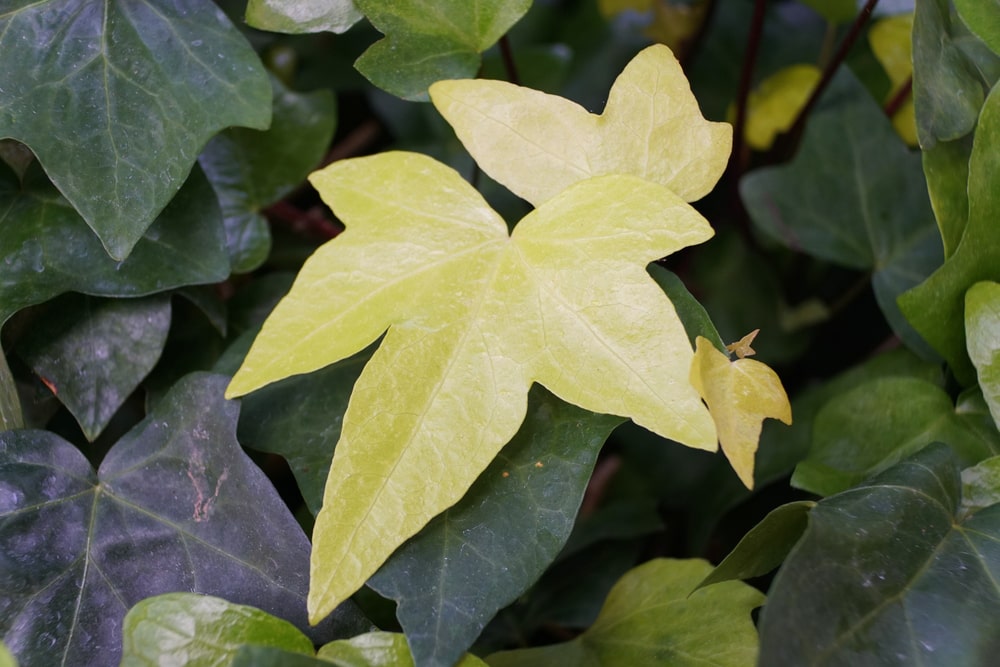 Moroccan ivy is a tropical plant that thrives in shady areas. Like other types of ivy, it produces small black berries that shouldn't be eaten because of their toxicity. The leaves are typically dark green but can sometimes be bright yellow. 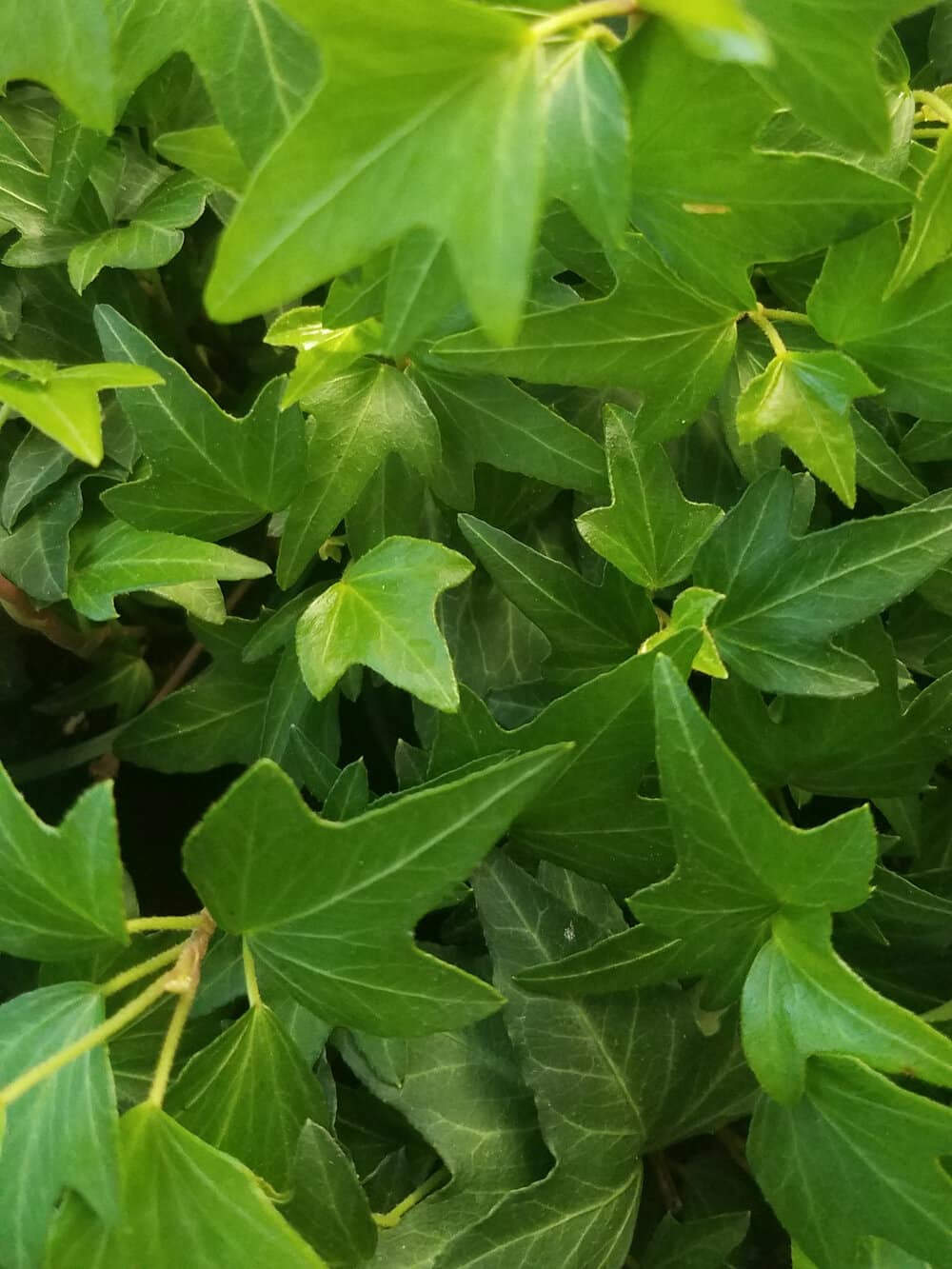 Needlepoint ivy is a variety of Hedera helix that gets its name from its pointed leaves. The plant usually has light green leaves and prefers partial or full shade. The plant is invasive in some areas and may take over nearby plants. 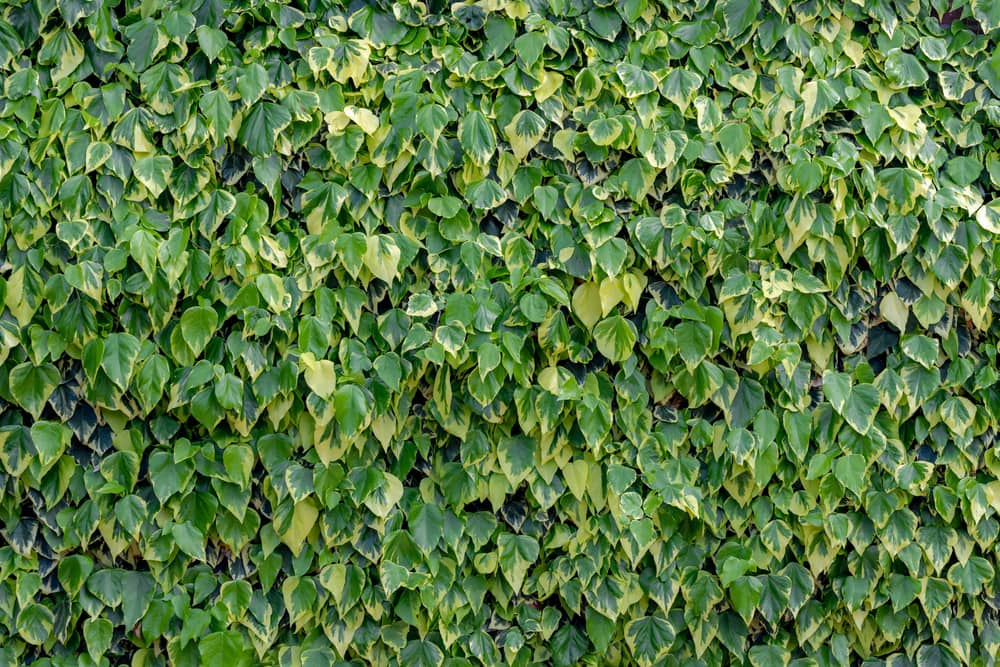 Persian ivy is often used as a groundcover in shady areas that can't grow grass. It can easily be mowed with a lawnmower if it grows too much. However, this plant will climb up trees rapidly. It also works well as a house plant since it doesn't need much sun. 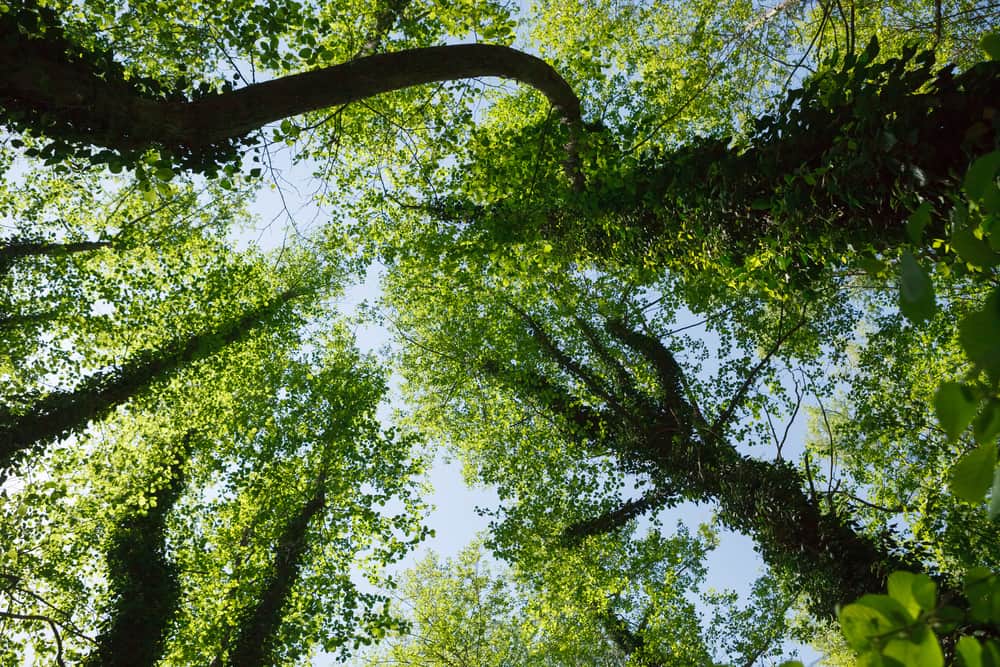 Russian ivy is an evergreen plant that grows quickly up trees, fences, and trellises. The glossy heart-shaped leaves are typically dark green. This plant can adapt to many climates and grows aggressively with proper conditions. It works well as a house plant but will need frequent pruning. 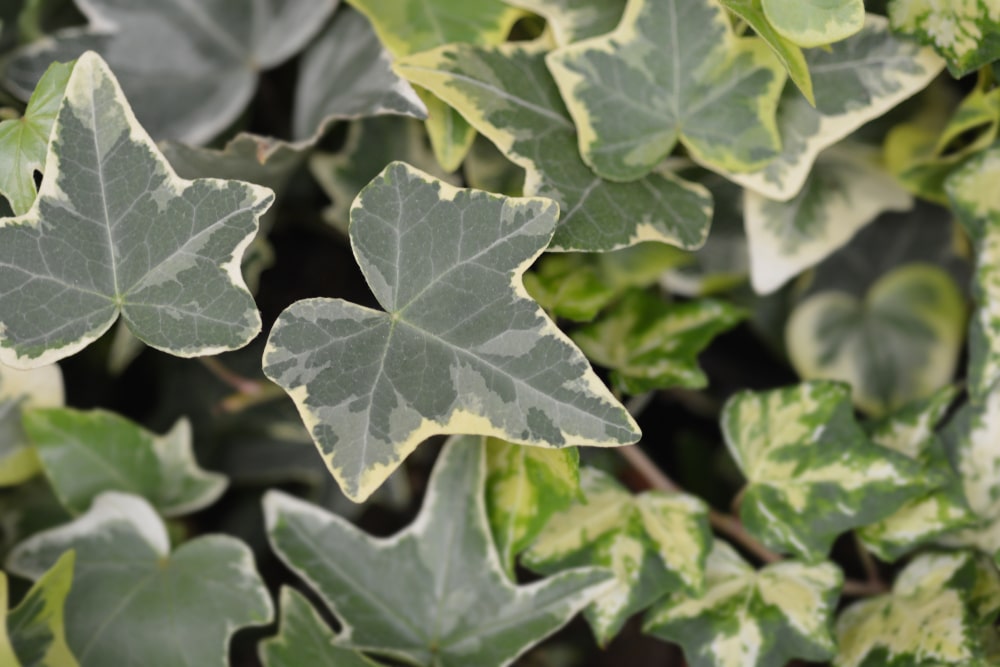 Shamrock ivy, also called cloverleaf ivy, is another Hedera helix variety. The clover-shaped leaves are typically dark green with light green veins and have three rounded points. This variety can survive temperatures as low as -20°F (-28.89°C), making it a great outdoor option for cold climates. 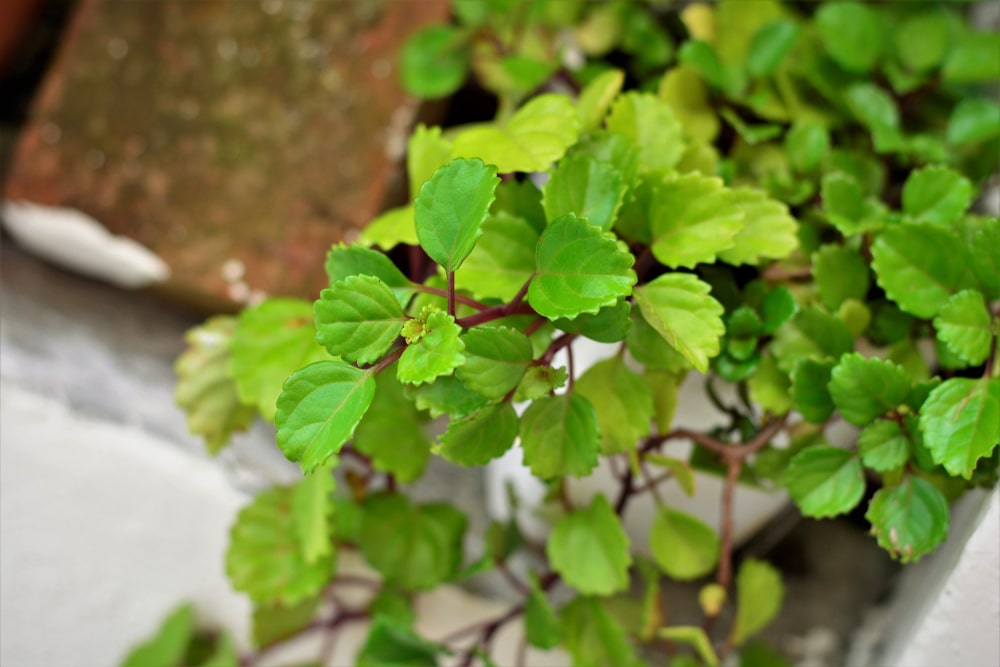 Swedish ivy is often grown as a house plant in hanging baskets because of the way the leaves spill out of the basket. The plant prefers indirect light, and the soil should be dried out completely between waterings. It's an excellent choice for beginners who are prone to forgetting to water plants.