In the botanical alphabet, most letters are represented by a stunning variety of well-known plant species. Meanwhile, some letters of the alphabet fall short.

You probably wouldn’t be shocked by how few plants exist that start with letters like Q, X, or Z. But the number of plants that start with I that the average person has heard of is also surprisingly low!

While your personal garden knowledge may cap out at irises, impatiens, and ivies, the world hosts tons of lesser-known plants that start with I. Once done here make sure you check out our list of 27 Inviting Flowers That Start With The Letter I!

Plants That Start With I – Quick Look 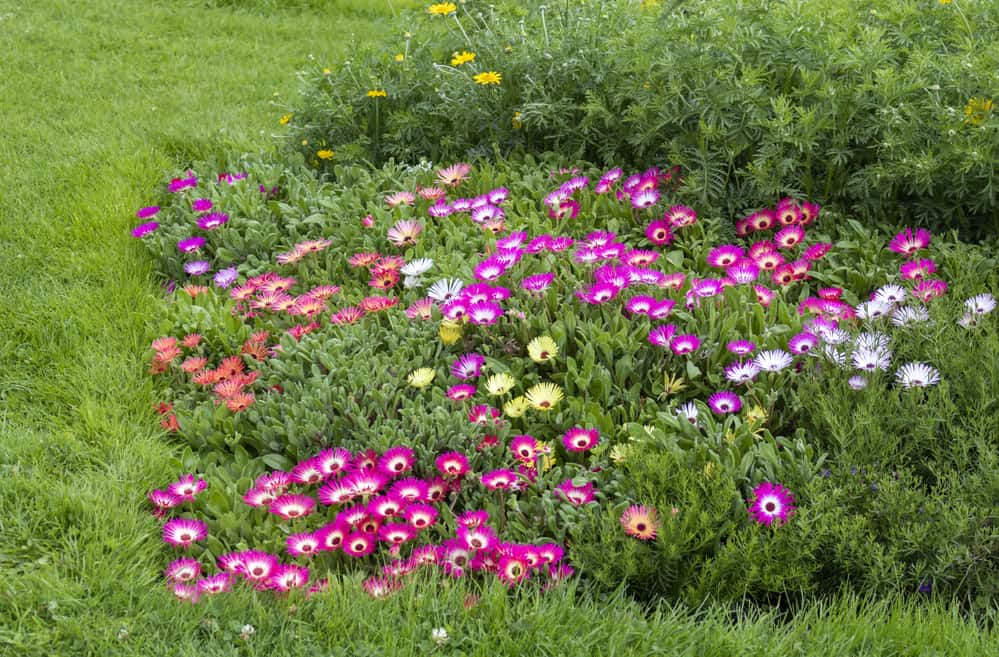 These succulent species are not known as ice plants because they thrive in frigid climates — quite the opposite!

Rather, the common name comes from tiny, iridescent hairs that grow on the plants’ leaves. When sunlight hits these hairs, they resemble sparkling ice crystals. 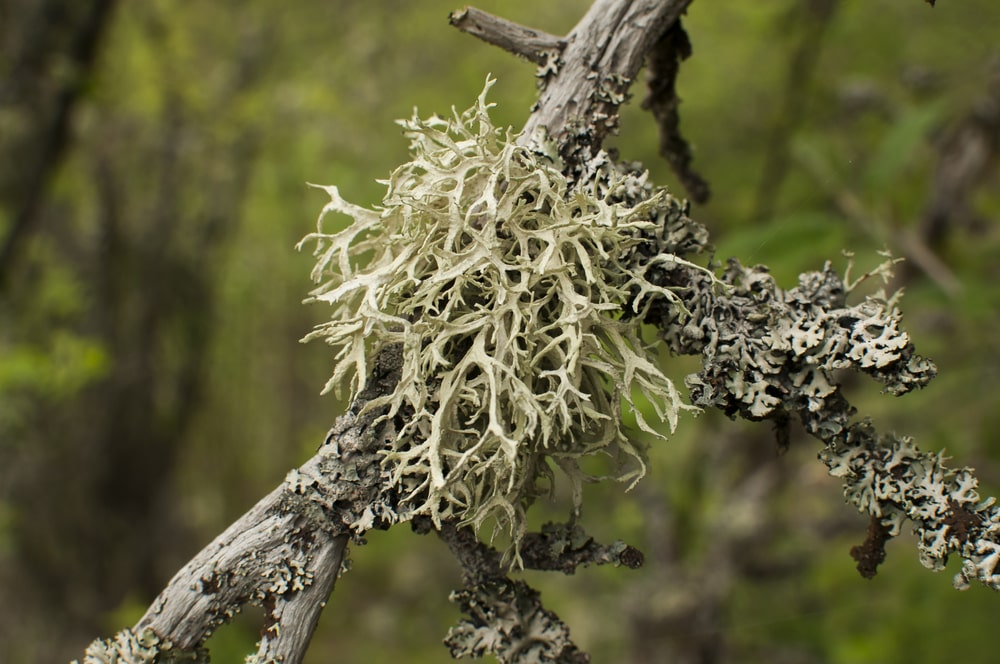 Despite its common name, Iceland moss is not a true moss. (Technically, it’s not even a plant.)

Iceland moss is a type of lichen. Lichens are fascinating organisms that contain both a fungus and an alga living as a single unit.

This particular lichen is found throughout Arctic and alpine climates in Iceland, the British Isles, and North America.

Icicle plant is an ornamental species of Helichrysum typically grown as an annual in containers and border beds. Its name comes from the silver, needle-shaped leaves that look like a layer of frost.

Unlike other members of Helichrysum, icicle plants do not have medicinal properties.

This Asian native is a relatively rare ornamental tree grown in temperate parts of Europe, North America, and other regions.

Each Igiri tree boasts only male or female flowers. If both sexes are planted and the flowers are fertilized, the female tree will produce clusters of grape-like fruit that hang from the branches. 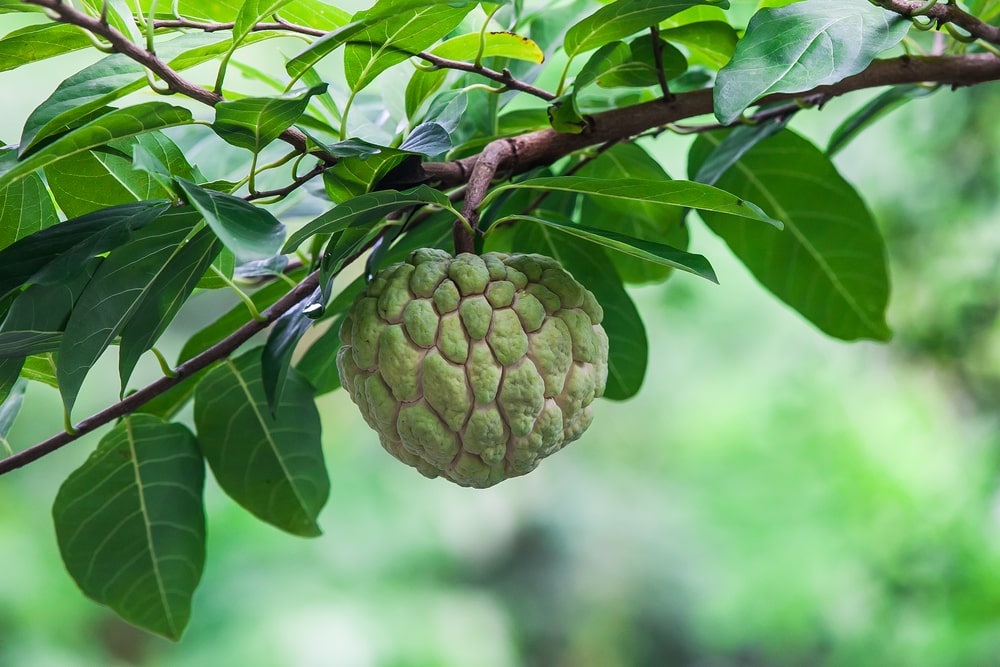 Ilama trees are tropical, fruit-bearing trees found in Central America. Although Annona diversifolia is most often associated with this name, some people refer to Annona purpurea as an ilama tree as well.

Illicium is a genus of flowering evergreens commonly known as anise trees. Most illiciums are grown as ornamentals. One species, Illicium verum, produces the spice star anise. 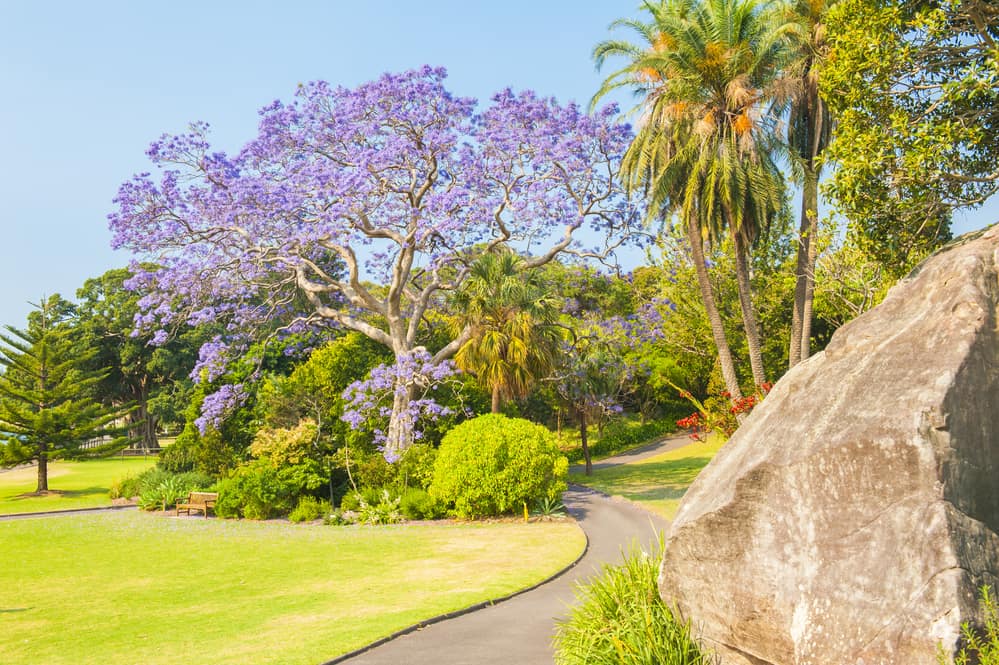 The Impala lily is a tree-shaped succulent with a thick trunk and pink-and-white flowers. Like other succulents, this plant thrives in arid climates.

This species is closely related to Adenium obesum, or the desert rose. You’ll sometimes see the common names for these flowering succulents used interchangeably. 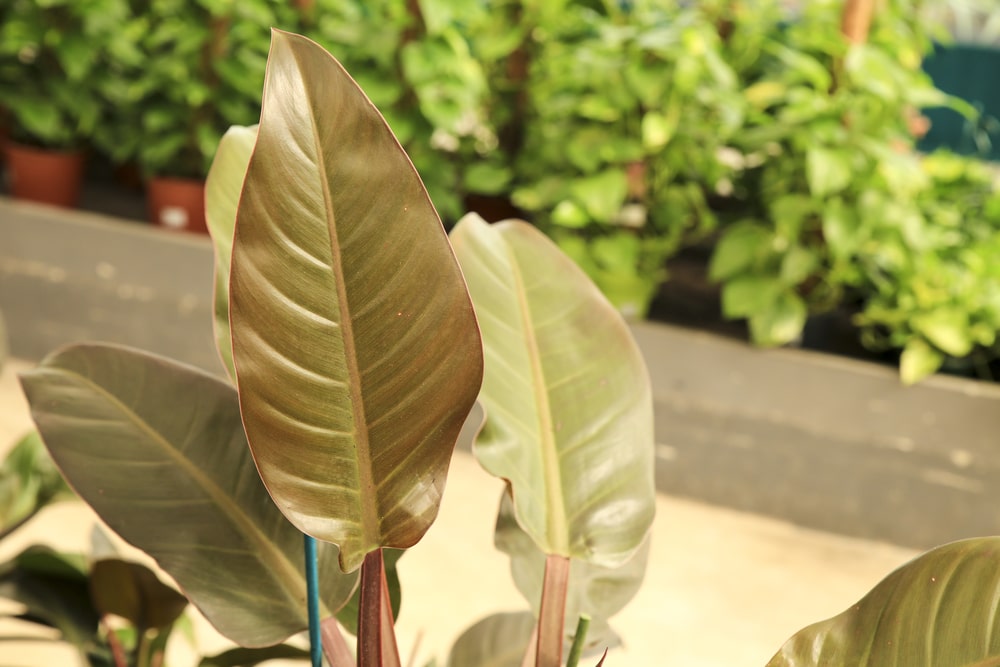 Imperial Red is a cultivated philodendron hybrid grown for its unique color palette. This is a self-header philodendron, meaning that the red and green leaves grow upright rather than as climbing vines.

Incense cedar is one of the most durable types of lumber native to North America. This tree is found growing throughout parts of Oregon, California, Nevada, and Mexico.

Despite its name, incense cedar is not a member of the true cedar genus. Instead, it’s a type of cypress tree. 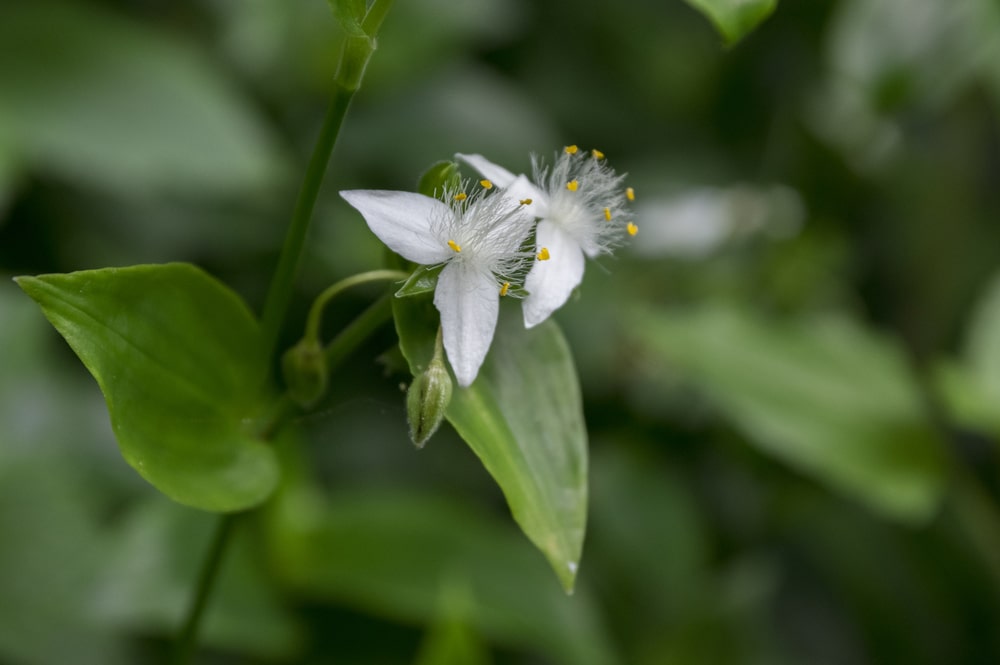 Inch plant is one of the common names for members of the spiderwort genus. The species most commonly identified with this name is Tradescantia fluminensis.

Spiderworts have historically been known as wandering Jew plants but this name has, understandably, fallen out of favor. 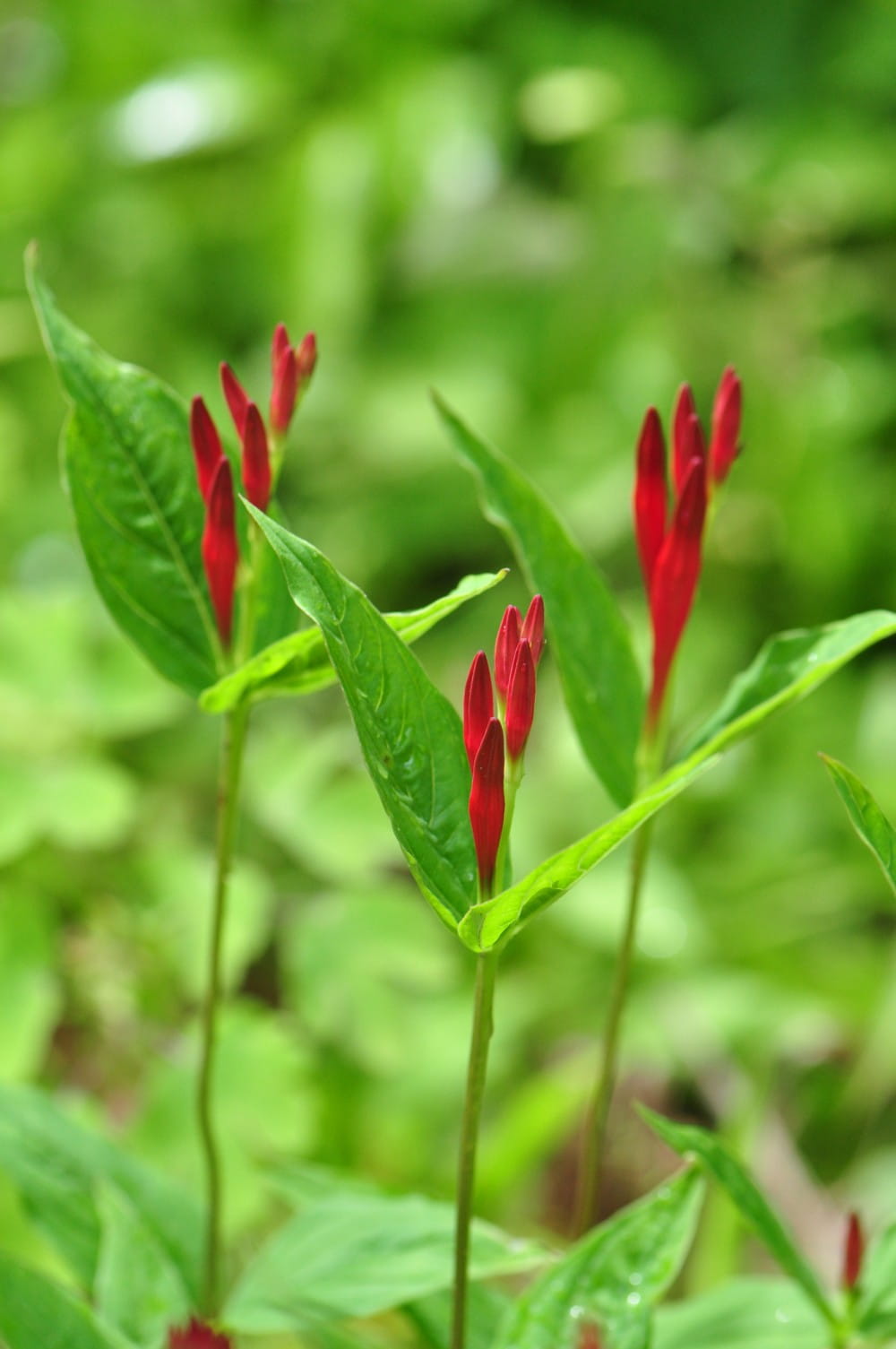 Indian pink is a North American native wildflower that flourishes in moist soil. Its flowers are bright red and yellow and tubular.

It should come as no surprise that hummingbirds are this plant’s preferred pollinators! 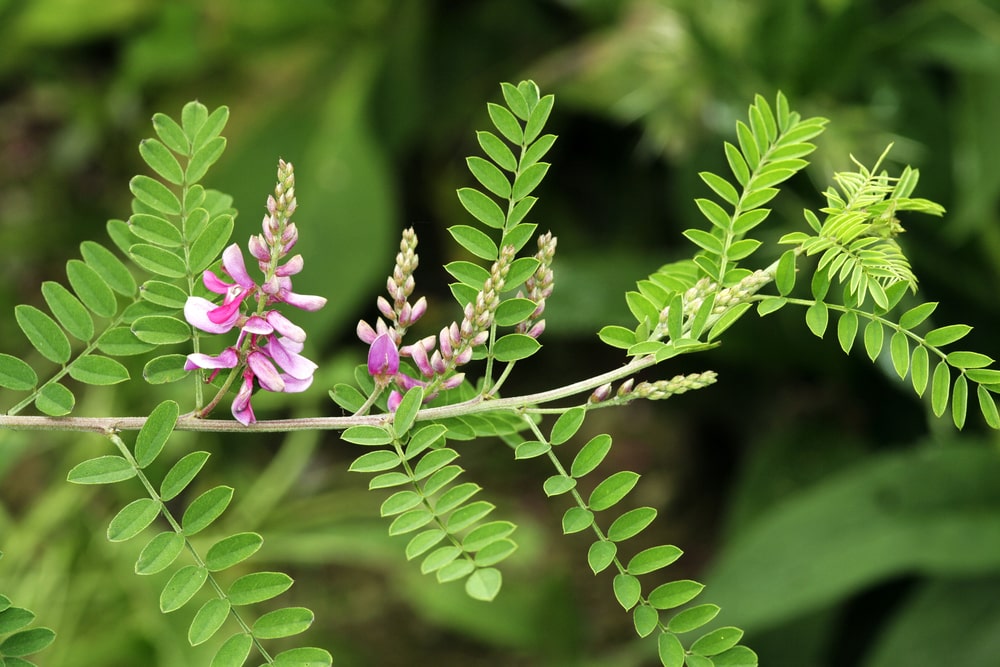 Even if you aren’t familiar with the indigo plant, you’re sure to have heard of the dye it produces. Indigo has been cultivated for several thousand years and, as a result, is naturalized throughout most of the world.

While indigo dye has largely been replaced with synthetic colorings, it can still be grown as a flowering ornamental. 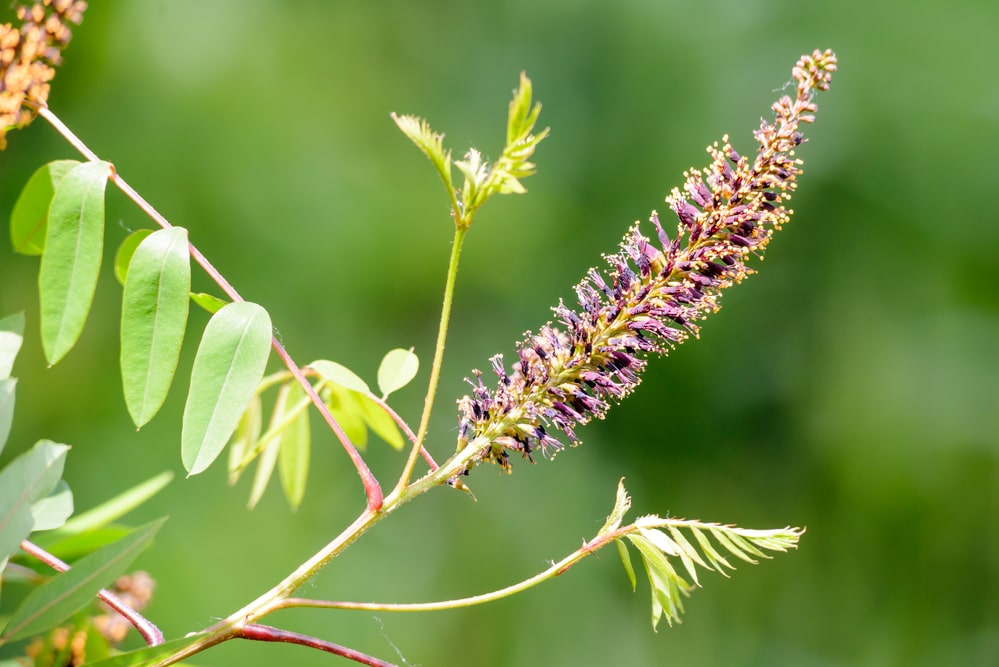 Indigo bush, or false indigo, is not related to Indigofera tinctoria. However, its flowers have also historically been used to create blue dyes.

This North American native is a great food source for pollinators but can turn weedy in some areas.

Inkberry is a type of smooth-leaved holly that produces black berries. The berries’ color is the most likely inspiration for this holly’s name. 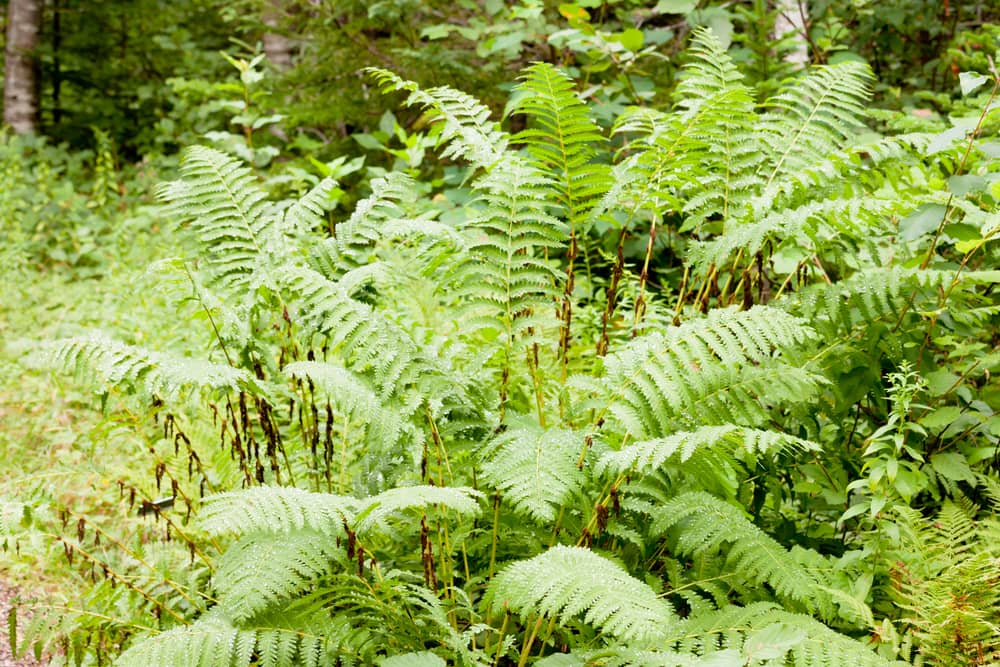 An interrupted fern is one of the best varieties to grow in the North American shade garden.

These natives get their name from the gap that appears in the fronds when the fern’s spore-bearing leaflets die off in mid-summer (leaving behind the plant’s non-fertile leaflets). 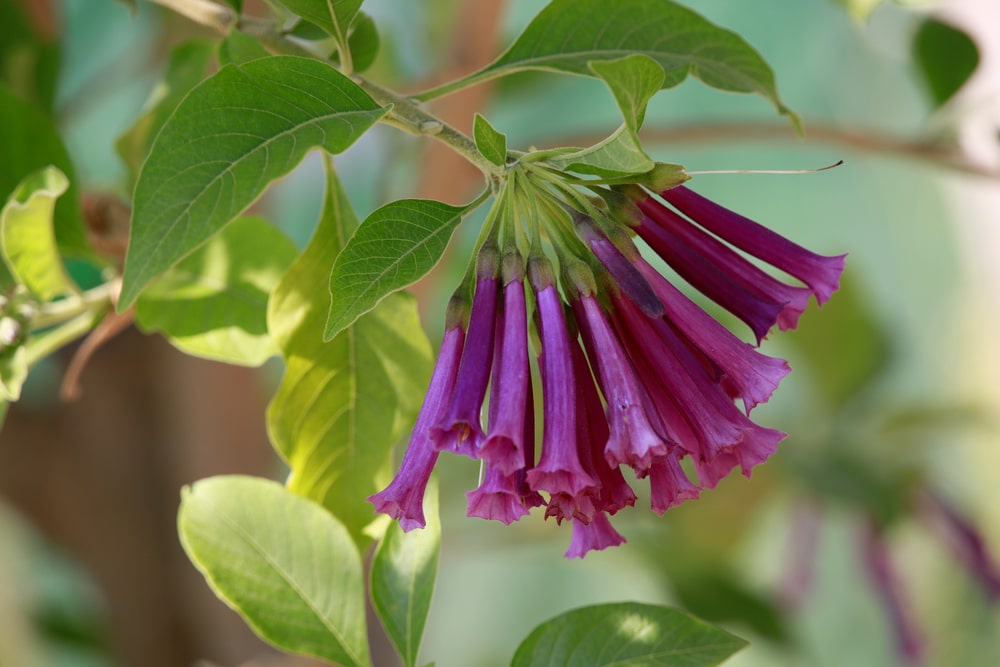 The Iochroma genus contains several flowering perennials that are distantly related to the angel trumpet vine.

Iochromas boast tubular flowers of various colors. These plants are perfect for the warm-climate hummingbird garden! 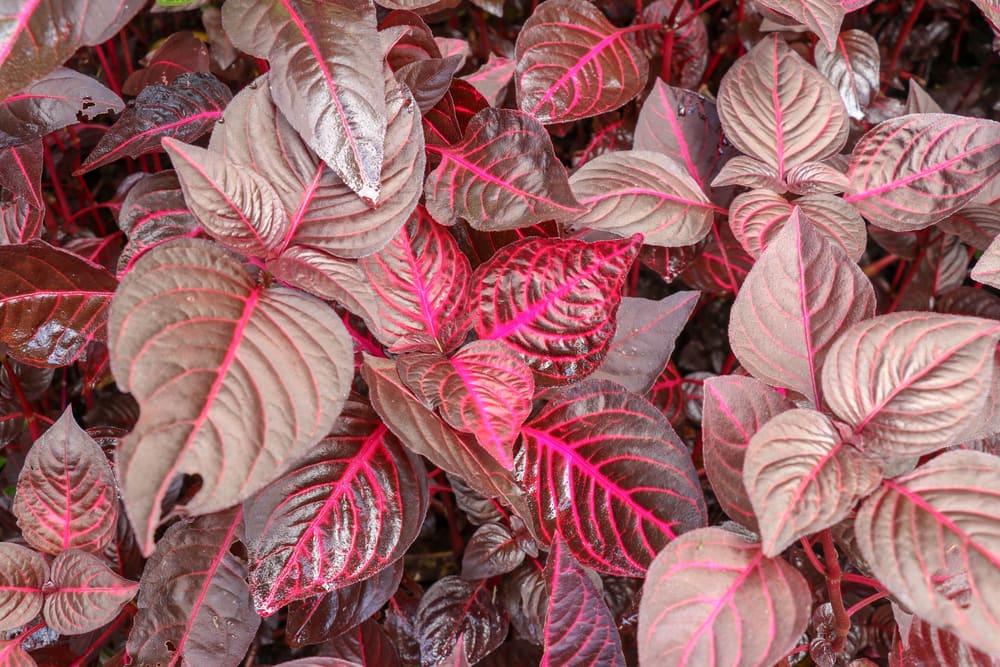 Iresine, also known as bloodleaf, is a stunning foliage plant that offers a contrast in the annual flower garden.

As the name “bloodleaf” implies, the leaves of the iresine are bright red. The veins can be pink, yellow, green, or white. 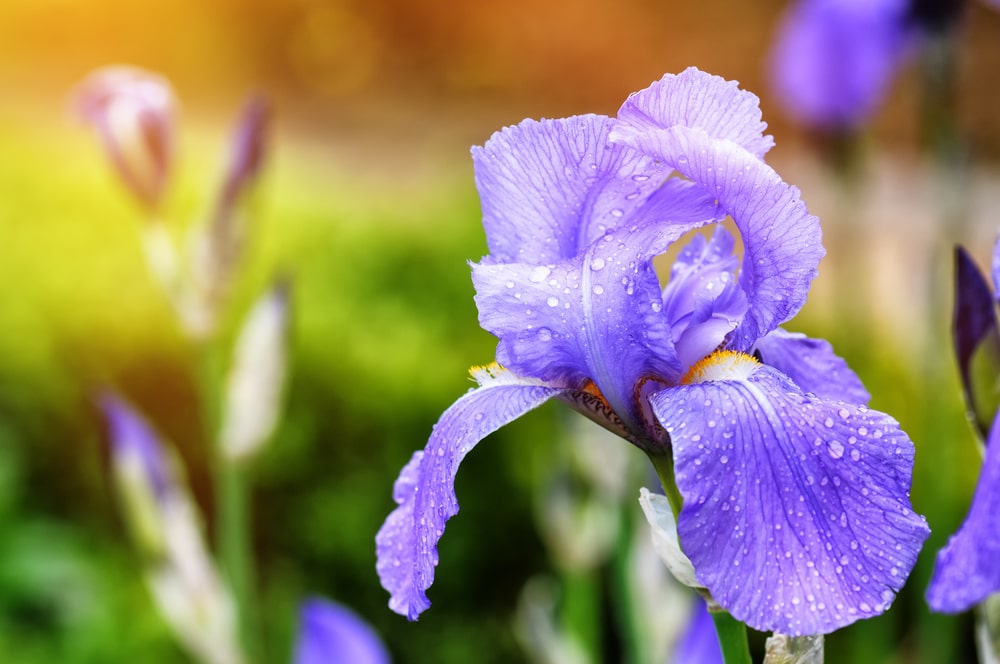 This beloved spring flower is a surefire way to add color and texture to your cold-climate garden beds.

There are several types of iris — bearded irises tend to be the most recognizable. Depending on the species, irises may grow from bulbs or rhizomes. 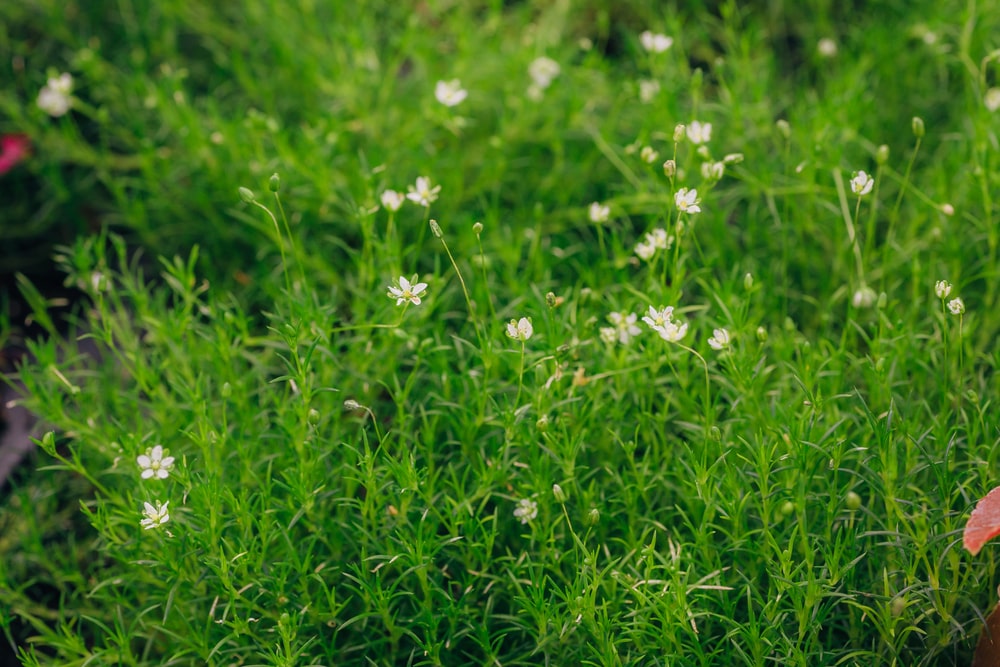 If you’re unsure about growing moss in your garden, no worries! Irish moss is actually an evergreen belonging to the carnation family. It may look like true moss but doesn’t have the same care needs. 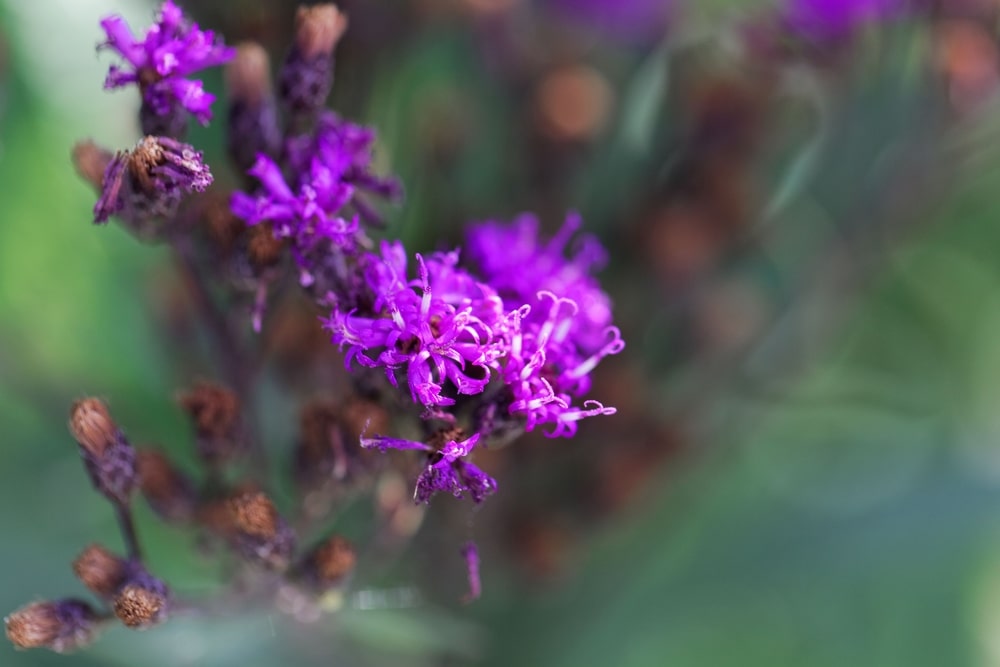 Ironweed is a popular pollinator-friendly flower that attracts insects, birds, and other wildlife. This plant boasts purple, aster-like blossoms and is native to eastern parts of North America.

The ironwood tree is native to North America. It grows well in most of the United States and parts of southern Canada. 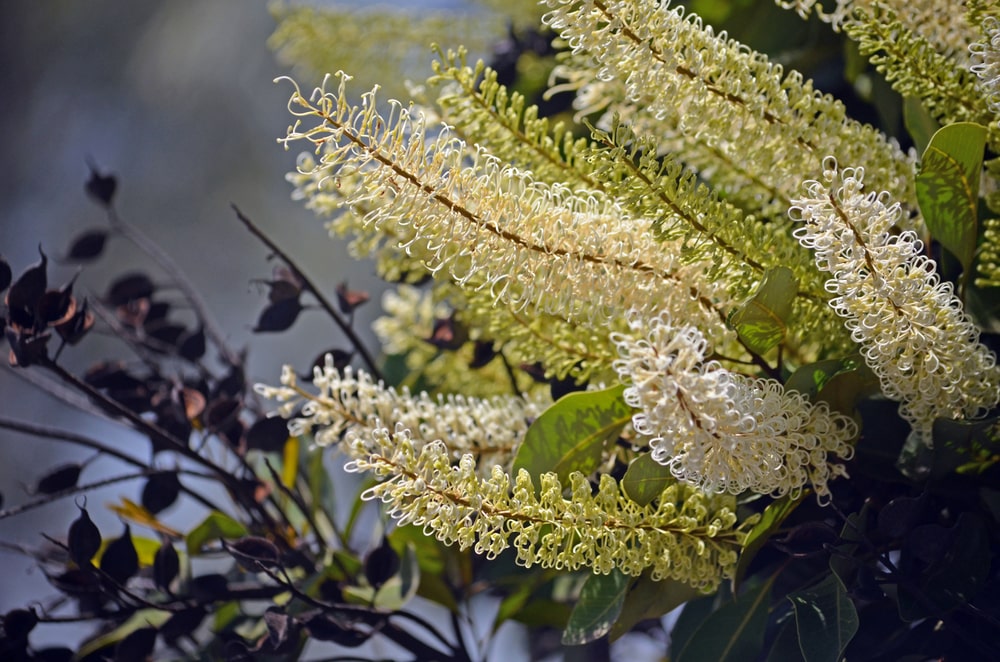 The ivory curl tree is native to Australia, where it is seen fairly often in gardens and wild habitats. This tree’s flowers form in dense clusters with curled spikes — hence the plant’s common name.

Phytelephas is a genus of 6 palm tree species often known as ivory palms.

This colloquial name is inspired by the palm seeds’ endosperm, which closely resembles elephant ivory. Dried palm ivory endosperm is a wonderful alternative to the traditional ivory trade. 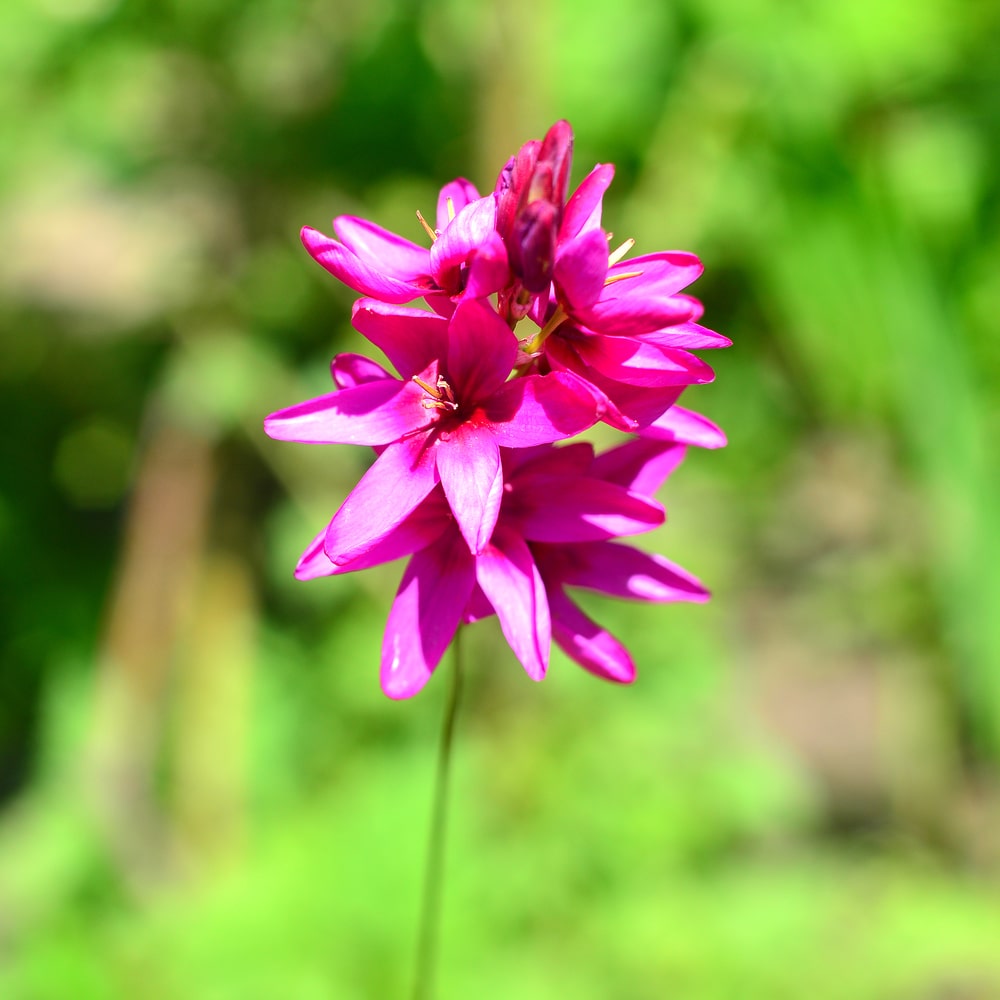 Members of the Ixia genus are also known as wand flowers and African cornflowers. Ixia plants grow as annuals in most climates. If desired, you can dig up the corms in fall for storage until the following spring. 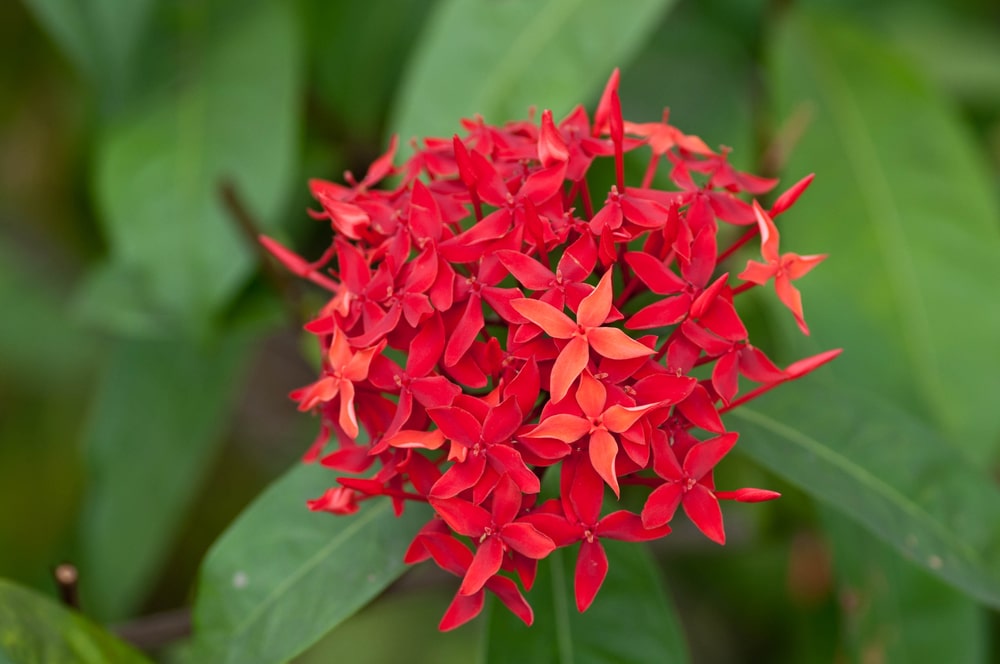 Ixora shrubs are small evergreens native to Asia. Ixora shrubs are beautiful landscape additions in warmer climates. However, these plants can also be kept as houseplants in all regions.