Looking for plants that start with G after seeing our list of beautiful flowers starting with G?

Even if you’ve been an avid gardener for many years, you may be shocked by just how many plant varieties you’ve barely heard of!

Most are familiar with popular plants that start with G such as geraniums and gardenias. But those well-known examples are just scratching the surface of shrubs, flowers, herbs, and more that start with this one letter of the alphabet!

Keep reading to learn about some plants that start with G that you might be surprised to learn exist: 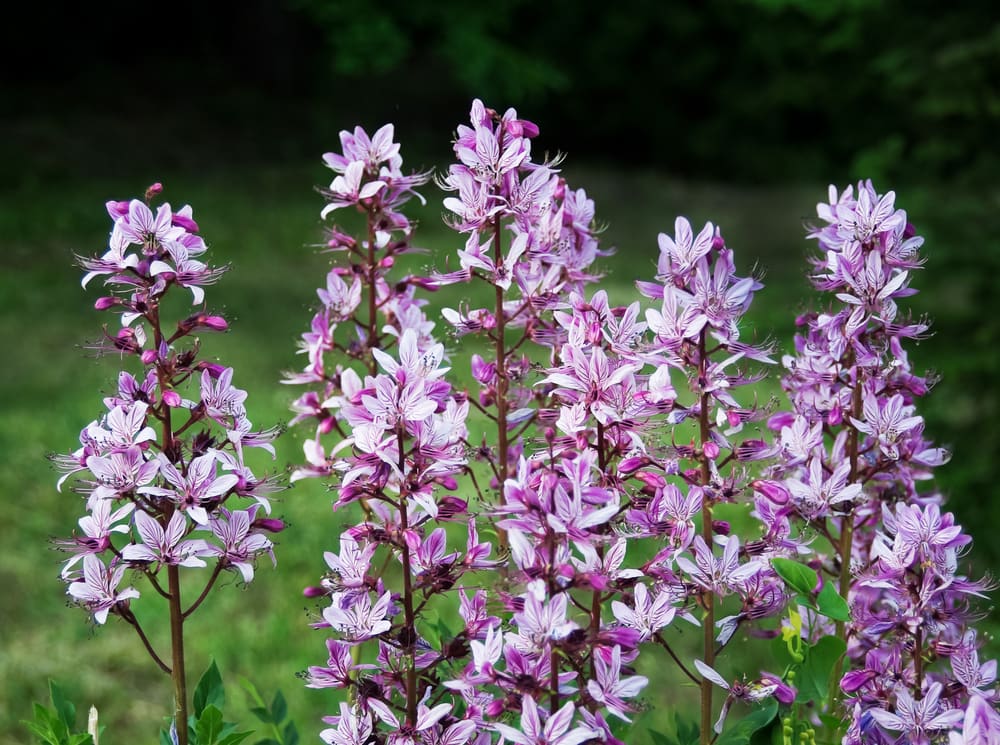 Gas plants are quirky perennials native to areas of Europe, Africa, and Asia. The pink or white flowers form on upright stalks and emit a sweet, fruity fragrance.

The flowers also produce a flammable oil that can (very rarely!) cause the plant to spontaneously catch fire. 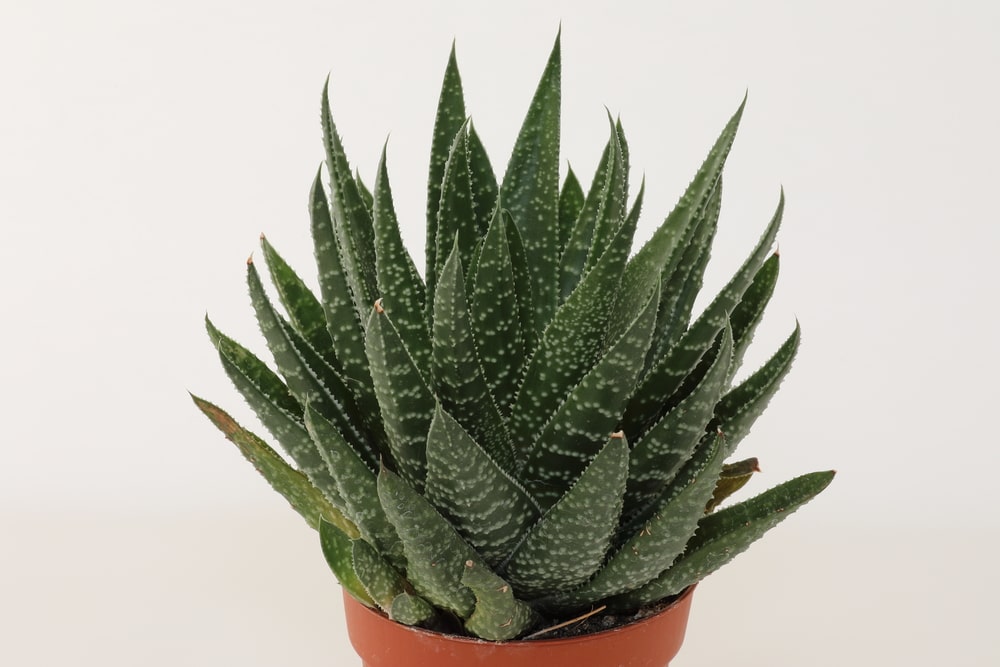 Gasteria is a genus of succulents that are also known as ox tongues. The pointed, erect leaves of the gasteria are sometimes compared to those of aloe plants.

Gasteria tolerates low light much better than other succulent varieties. 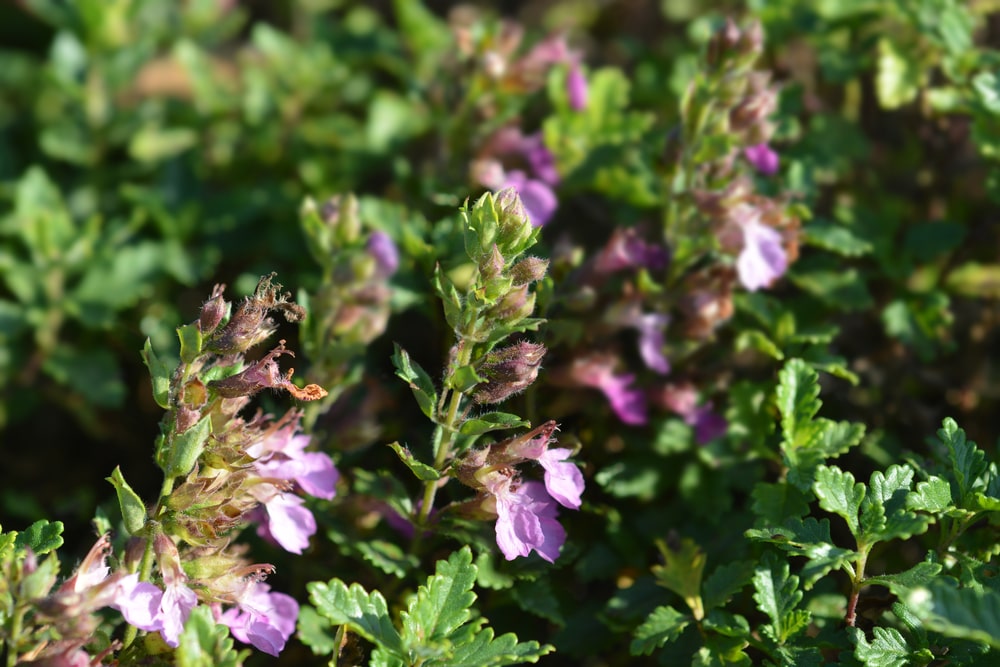 Germander is an understated shrub that isn’t used as often as it once was. But the flowers are undeniably beautiful and extremely attractive to pollinator species.

Its drought tolerance makes the germander ideal for the xeriscape garden. 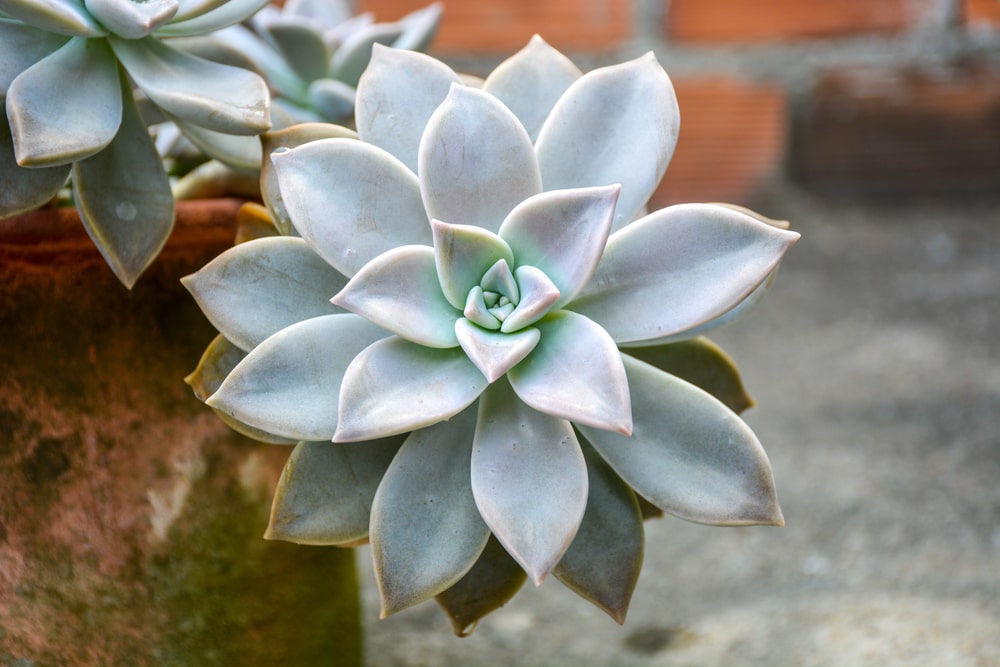 The ghost plant is a gorgeous succulent variety with white or gray leaves. Ghost plants can be grown indoors or in the landscape (climate permitting).

Interestingly, the leaves tend to turn pink in full sun or blue in low light. 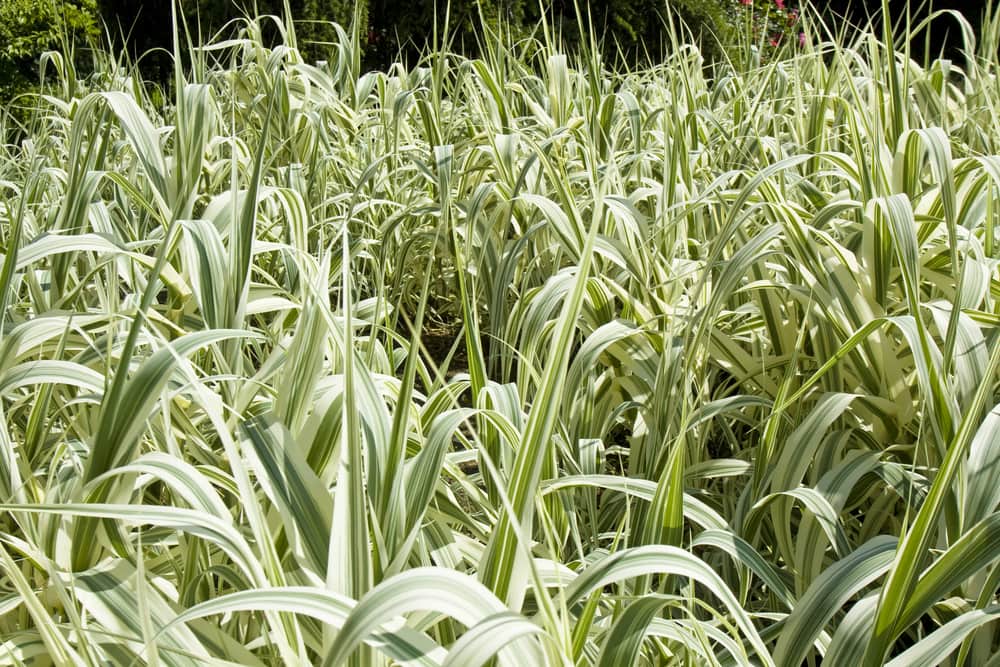 Arundo donax is a species of large grass originally native to parts of Asia and the Mediterranean. It was introduced to North America in the early 19th century and has since become incredibly invasive throughout the region. 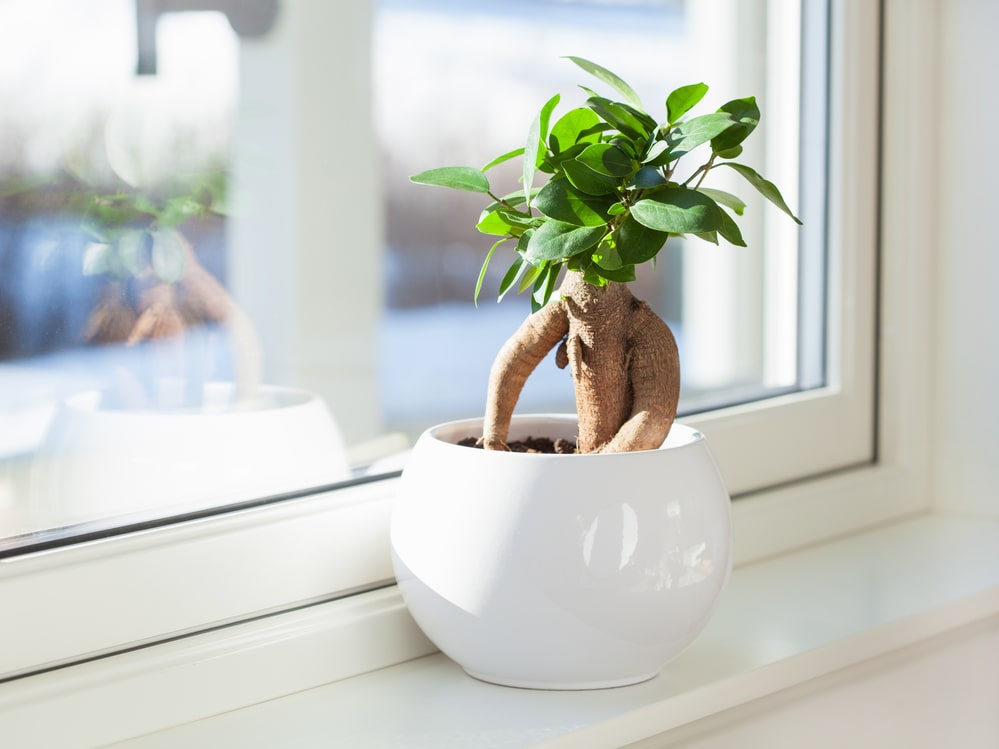 The ginseng ficus is most popular as a beginner-friendly bonsai tree. Two distinct species are cultivated under this name — F. microcarpa and F. retusa.

This perennial bulb gets its name from its tendency to bloom so early that the flowers poke through a layer of snow. If you have glory-of-the-snow in your garden, you’ll likely notice they emerge at the same time as your crocuses. 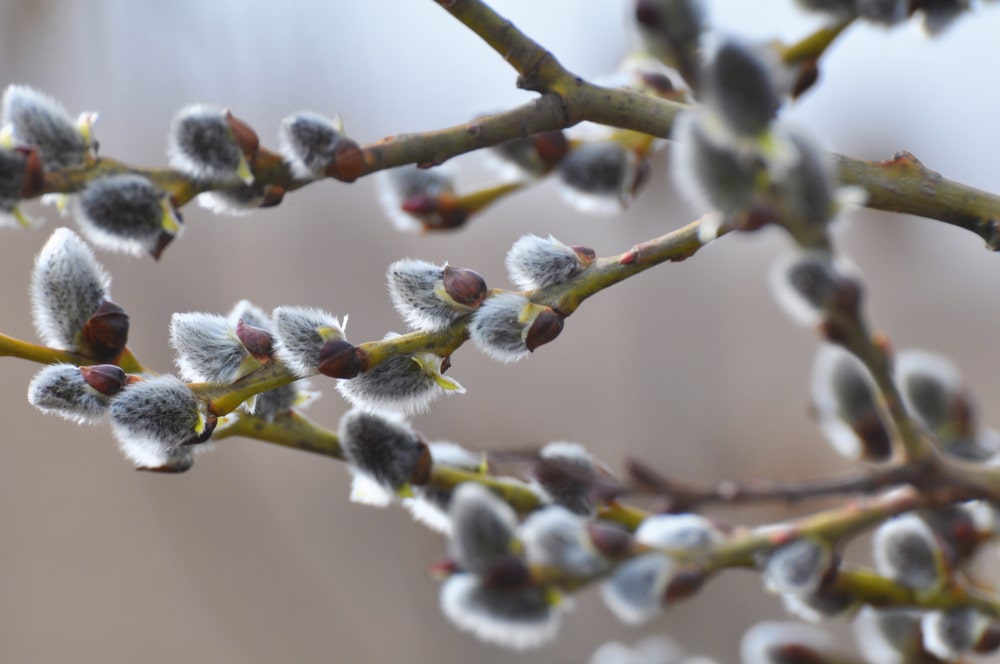 The goat willow is a Eurasian tree or shrub known for its catkin-shaped flowers that differ between male and female plants. Goat willow branches are frequently used in decorative arrangements alone and with other florals.

This species is one of two commonly known as pussy willows. The other, Salix discolor, is best identified by its native region of North America. 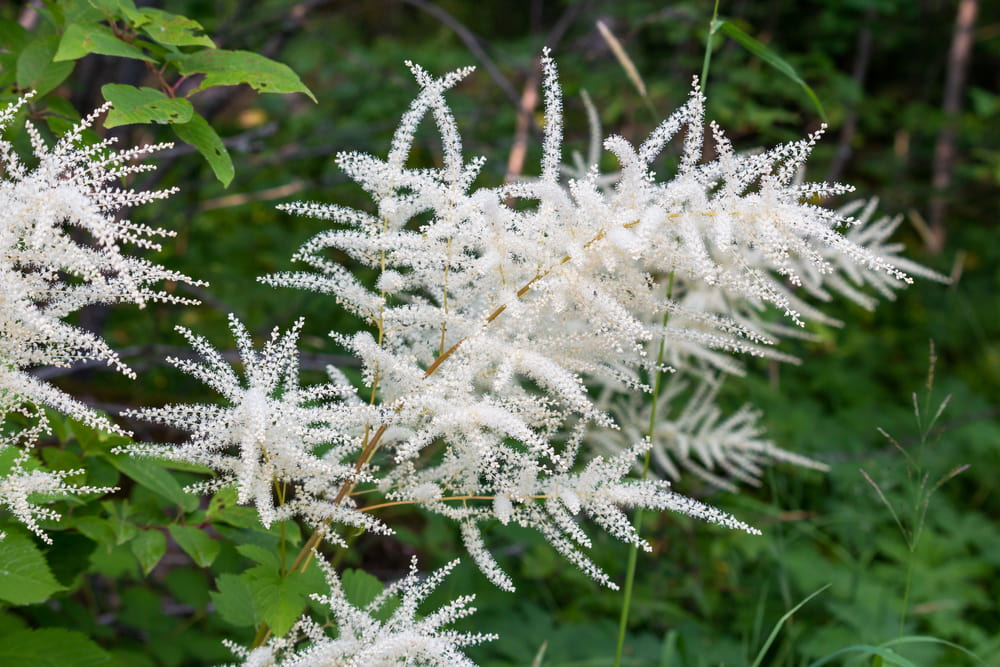 Goatsbeard, or goat’s beard, is a flowering shrub belonging to the larger rose family. Its name comes from the feather-like flowers that somewhat resemble tufts of hair on a goat’s chin. 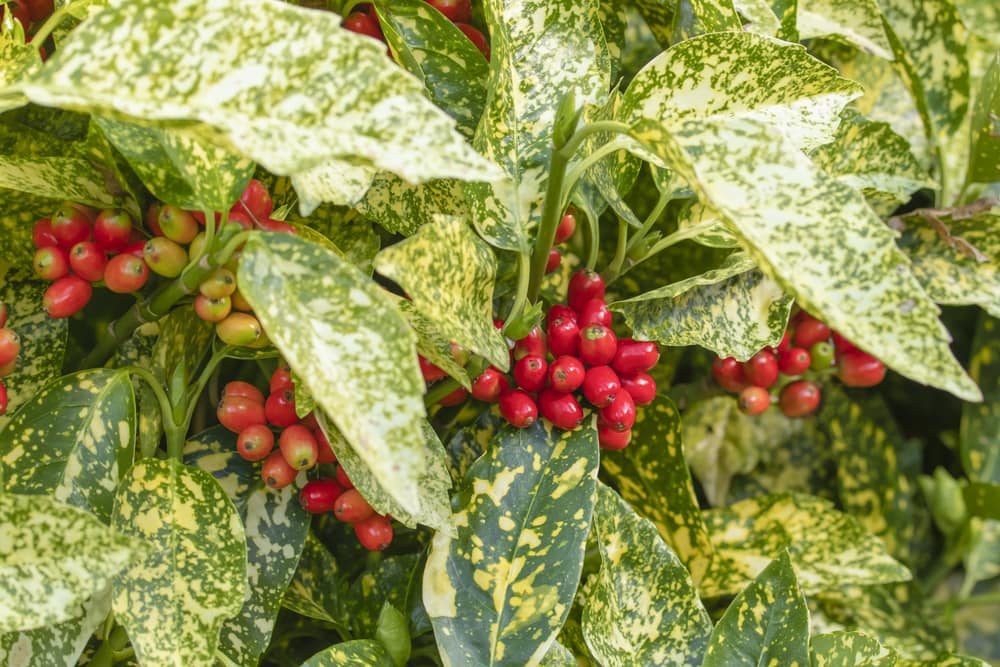 The gold dust plant is an intriguing addition to the warm-season shade garden. Its mostly green leaves almost appear to be covered in gold paint splatter.

Golden bamboo is popular as an ornamental variety because of its yellow-hued stems contrasted by bright green leaves.

Since Phyllostachys aurea is what’s known as a type of running bamboo, it spreads extremely easily and is widely considered invasive. 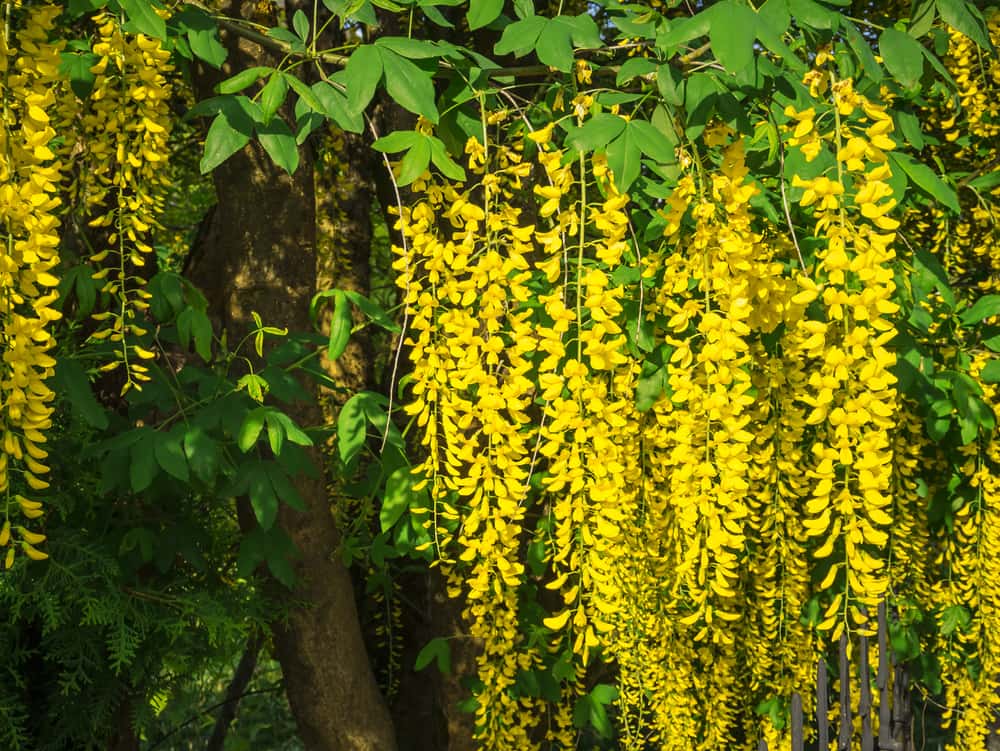 The golden chain tree is a genetic cross between the common laburnum and alpine laburnum. It produces rich yellow flowers that hang in clusters up to 20 inches long. 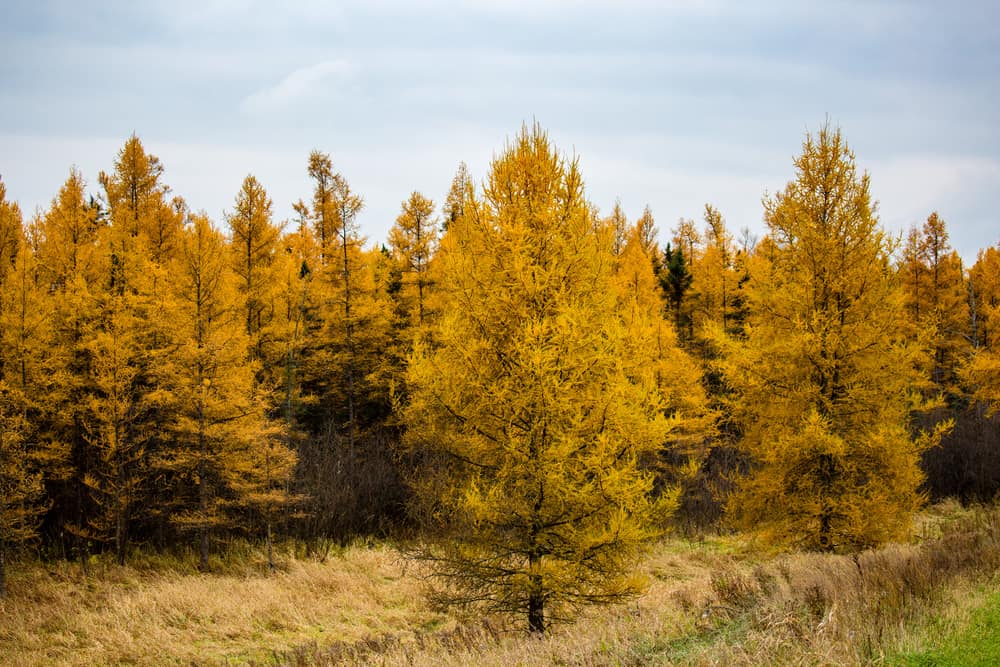 Surprisingly, the golden larch tree doesn’t boast yellow flowers. Instead, the tree’s needles are what bring a pop of color to the landscape each fall.

Throughout the spring and summer, the needles are an unassuming shade of green. 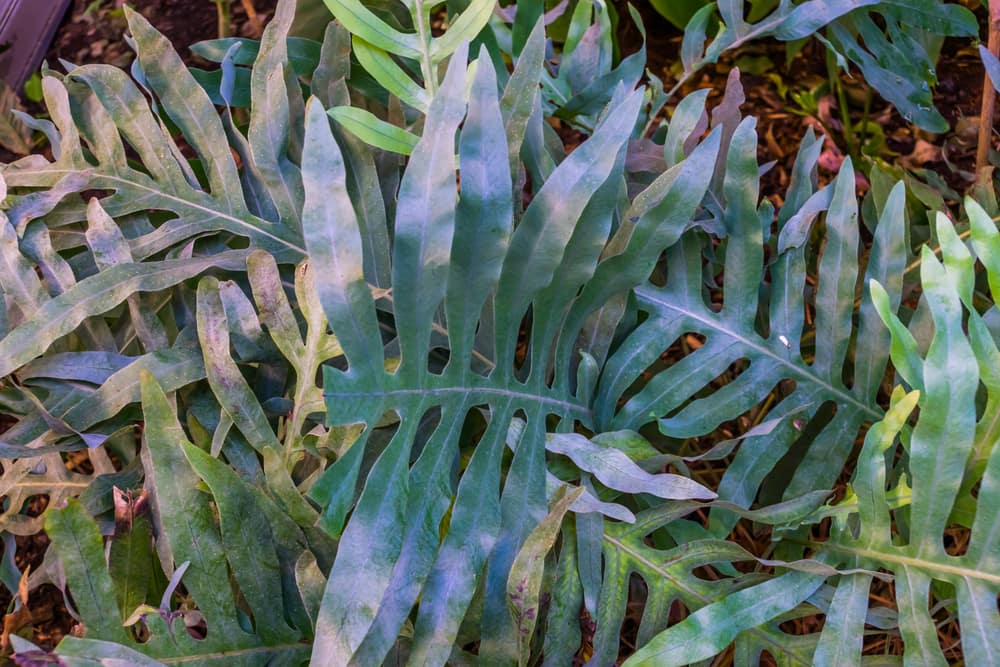 Golden polypody ferns are found in tropical forests in both North and South America. You can also find these ferns for sale as common houseplants. In the wild, they grow as epiphytes on large trees. 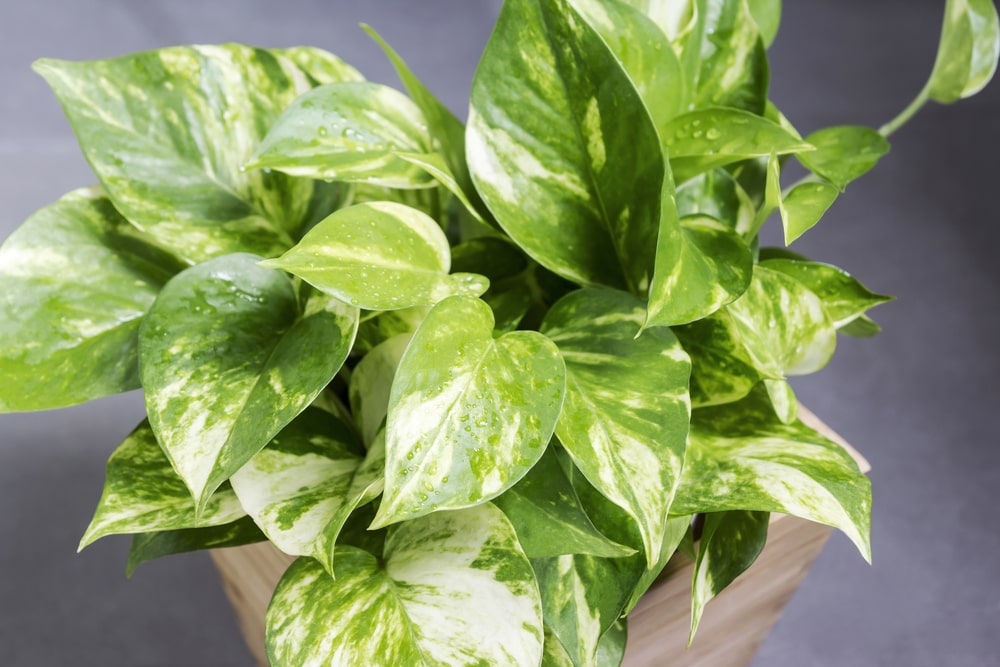 There’s no shortage of pothos cultivars for the avid houseplant grower to collect. But the golden pothos is by far the most common. Golden pothos has heart-shaped, variegated foliage. 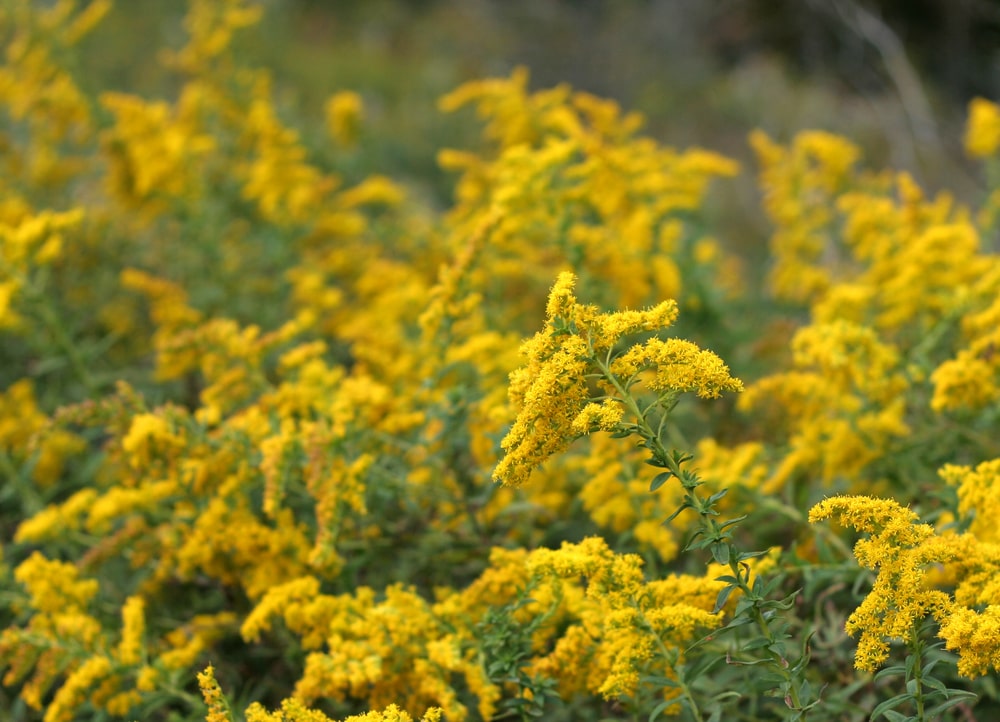 Goldenrods are a collection of over 100 plant species that have upright stems and yellow flowers. The inflorescences are a popular food source for pollinators.

Goldenrod is not invasive in North America because it is native to the region. However, it is still an aggressive spreader that must be kept in check when cultivated. 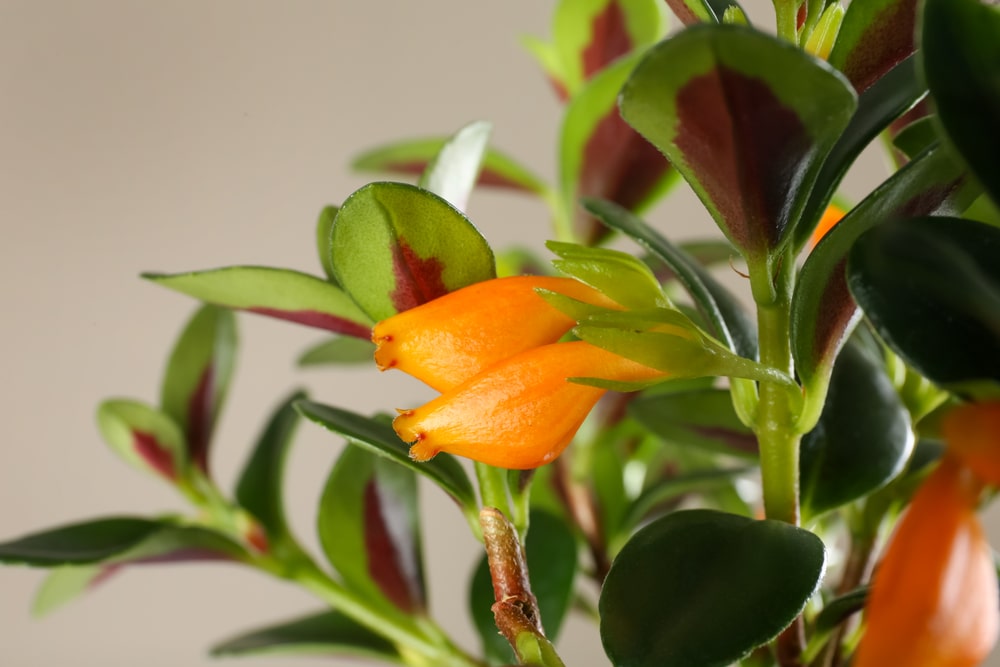 Few varieties live up to their colloquial names as well as the goldfish plant. The flowers of this semi-popular houseplant are remarkably suggestive of tiny goldfish. 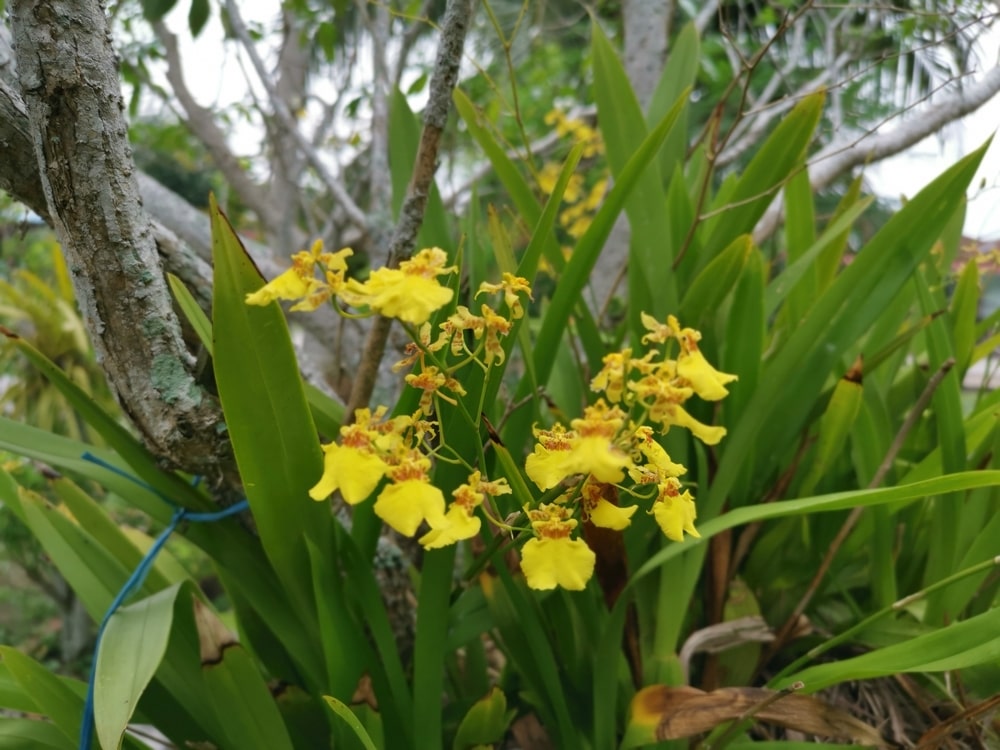 Gongora is a genus of epiphytic orchids containing approximately 65 known species. Many of these species are already quite popular among collectors. Others were discovered as recently as the last few years. 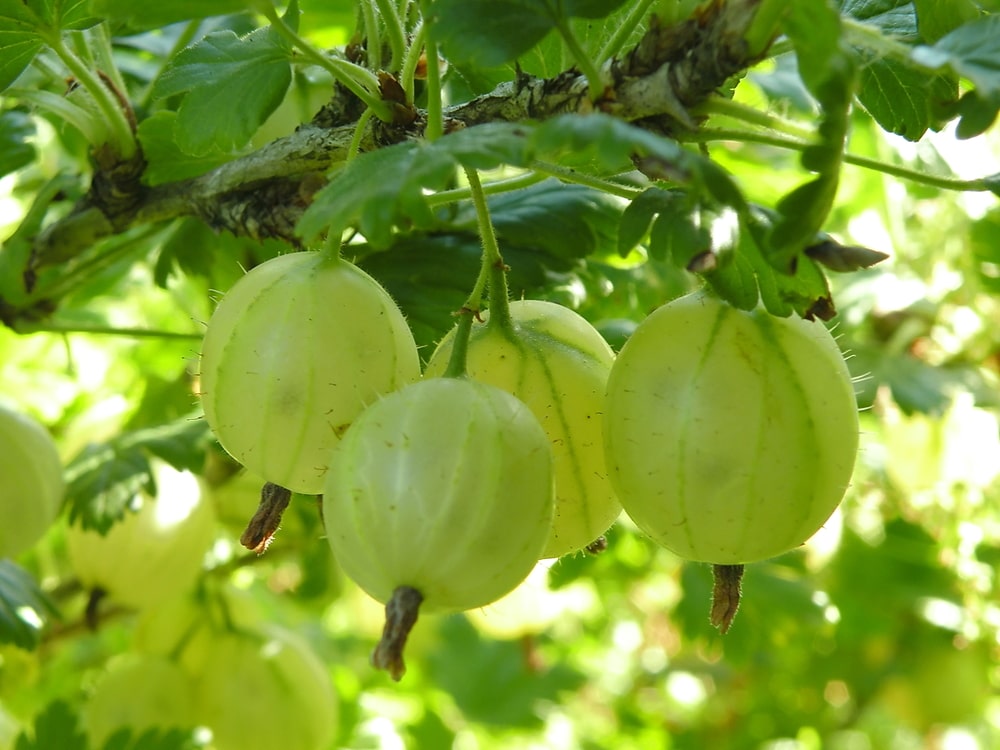 Gooseberry shrubs produce tart fruit that is popular for making jams and other treats. Unfortunately, some parts of the United States ban growing these bushes because they can carry white pine blister rust.

Gorse bush is a Mediterranean evergreen shrub infamous for the sharp spines that take the place of regular leaves on mature plants.

In late winter and spring, however, these plants produce gorgeous and fragrant yellow flowers. 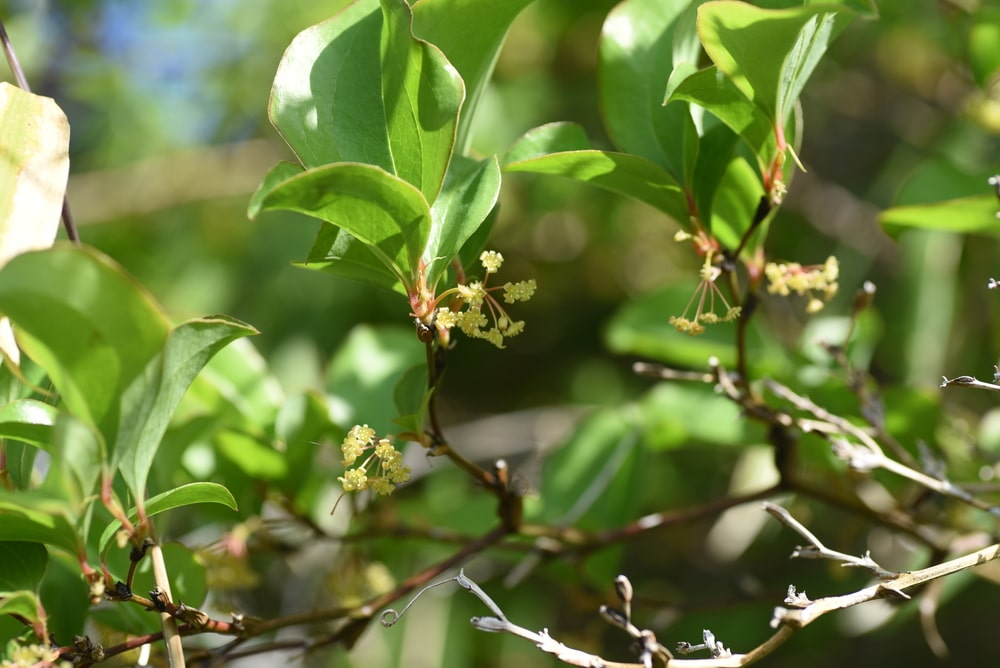 Greenbrier is a group of leafy vines native to many parts of the world. Despite their widely native status, greenbriers tend to be seen as weeds (that are very difficult to control once established!). Some types of greenbrier are foraged for food. 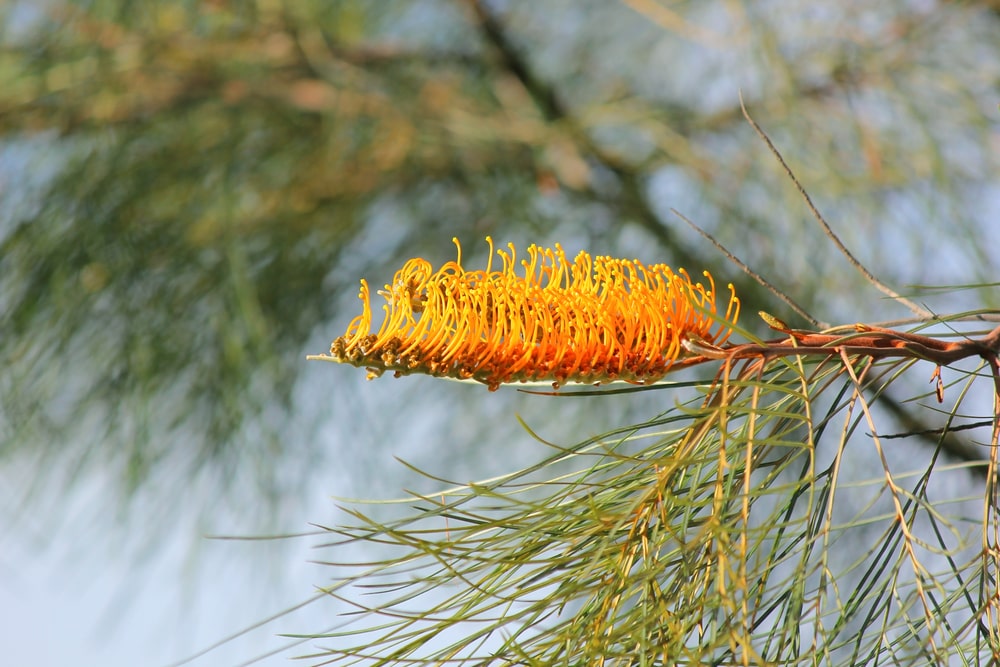 Grevillea is a fascinating genus of evergreen shrubs colloquially known as spider flowers. These plants are native to Australia but have gained popularity as ornamentals in Southern California and other similar climates. 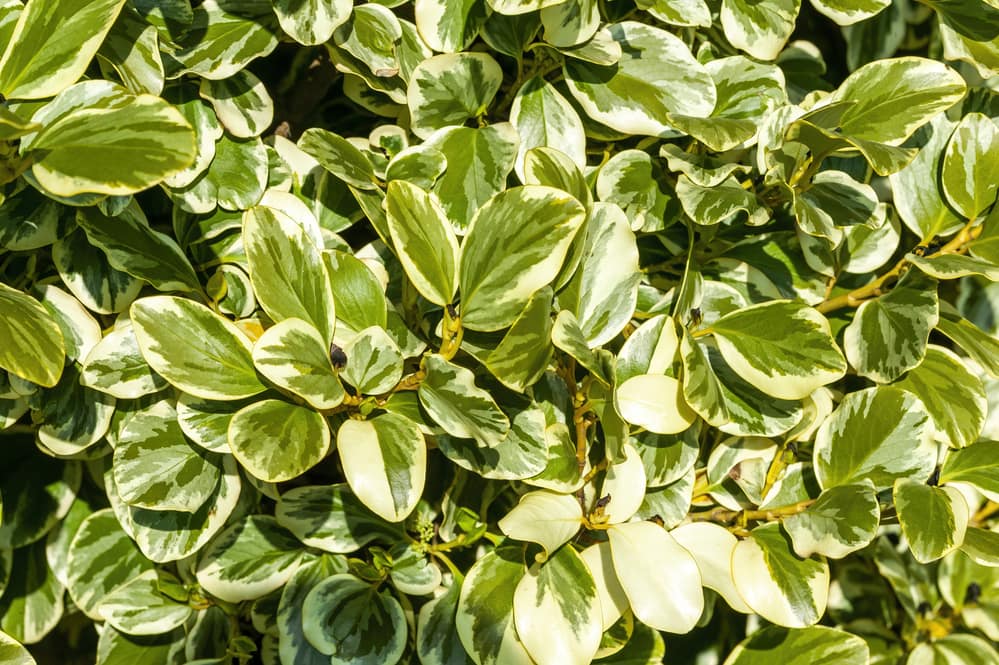 The griselinia shrub is a New Zealand native that fares surprisingly well in temperature climates around the world. Its evergreen foliage and compact nature make it a prime candidate for hedging.

Despite its common name, this plant belongs to the tomato family. Ground cherries produce small fruit that is sweet but reminiscent of a standard tomato.

Before adding ground cherries to your garden, be aware that the ripe fruit is the only non-toxic part of the plant.

Guzmania bromeliads are incredibly popular as houseplants, largely thanks to their colorful bracts. Many people mistake this central bract for a flower but it is actually modified leaf tissue.

The true flower emerges from the center of the bract.