Peperomia plants are a plant lover's best friend. In their natural habitat, these plants can grow on trees in tropical forests, which means they don't require many nutrients or much sunlight to thrive. This means that they're easy to grow as house plants because they don't require much fertilizing and will be happy in that dark corner in your kitchen.

Peperomias are generally short, bushy, and have round leaves. Some variations are vining or have elongated leaves. While most plants are green, you'll find some peperomia varieties that can be red, yellow, or white. All the plants in the Peperomia family are tropical and generally have the same care requirements, so you can pick out a plant-based on its looks.

Let's take a look at the different Peperomia types:

How to Care For Peperomias

Peperomias are easy to care for, which is why they're often recommended for beginner house plant owners. There are just a few things to consider when it comes to growing this plant indoors: 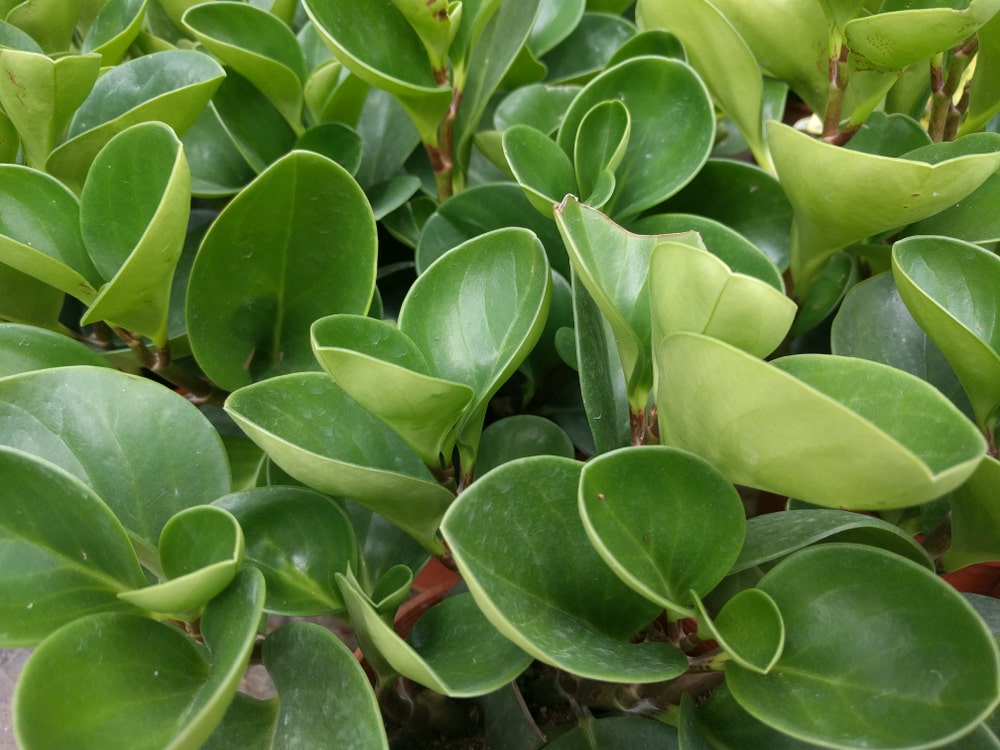 The baby rubber plant is a popular choice. It grows large dark green leaves that are a lighter green underneath. Some variegated varieties will be yellow and green. The plant prefers humidity in the summer, so you may want to mist it or place it near a humidifier. 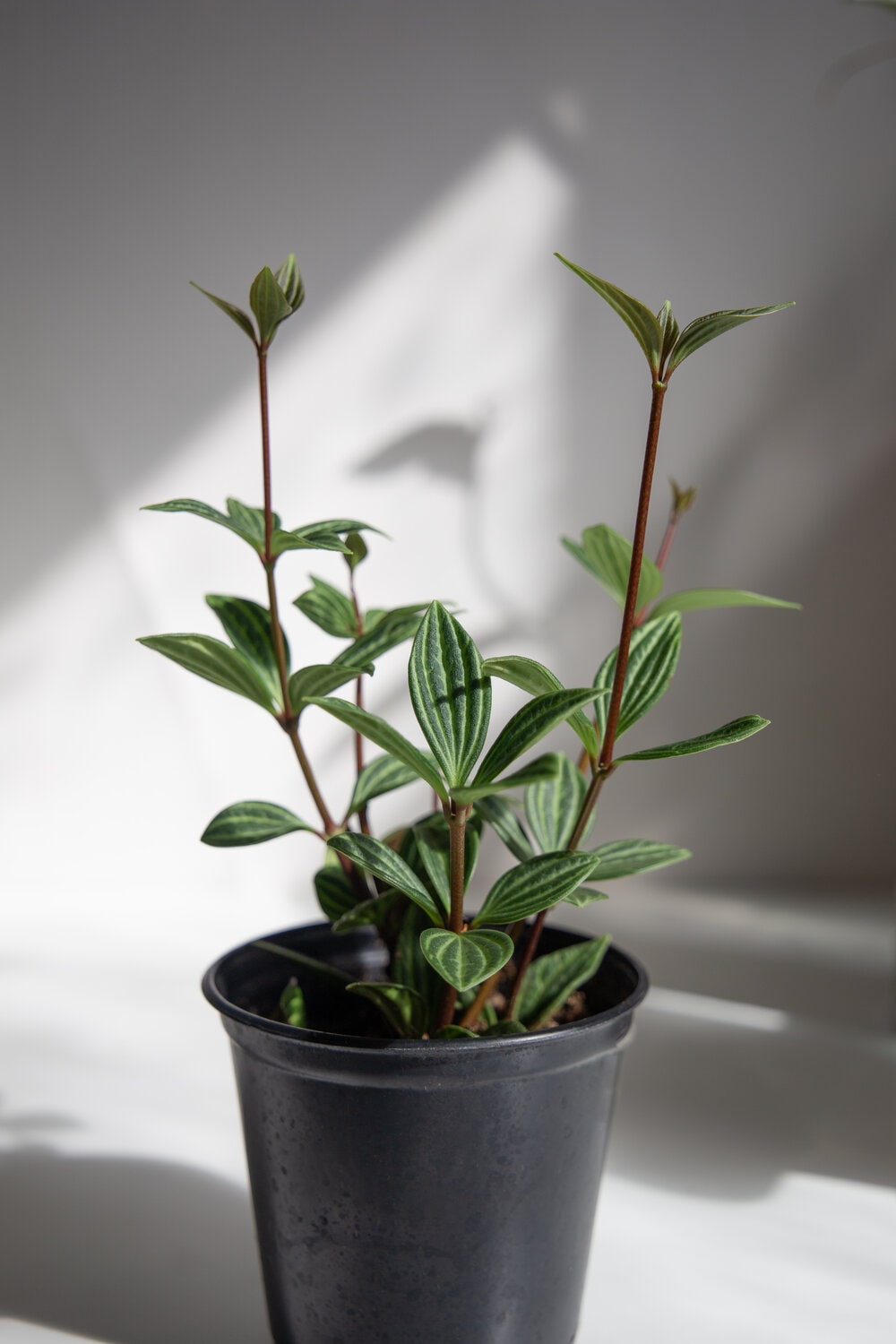 The beetle peperomia grows a little taller than most varieties and can even be put in a hanging basket and treated as a trailing plant. Its long stems are reddish-brown, and the oval leaves are dark green with light green stripes. The stems will feel like it has four flat sides, making this one stand out from the rest. 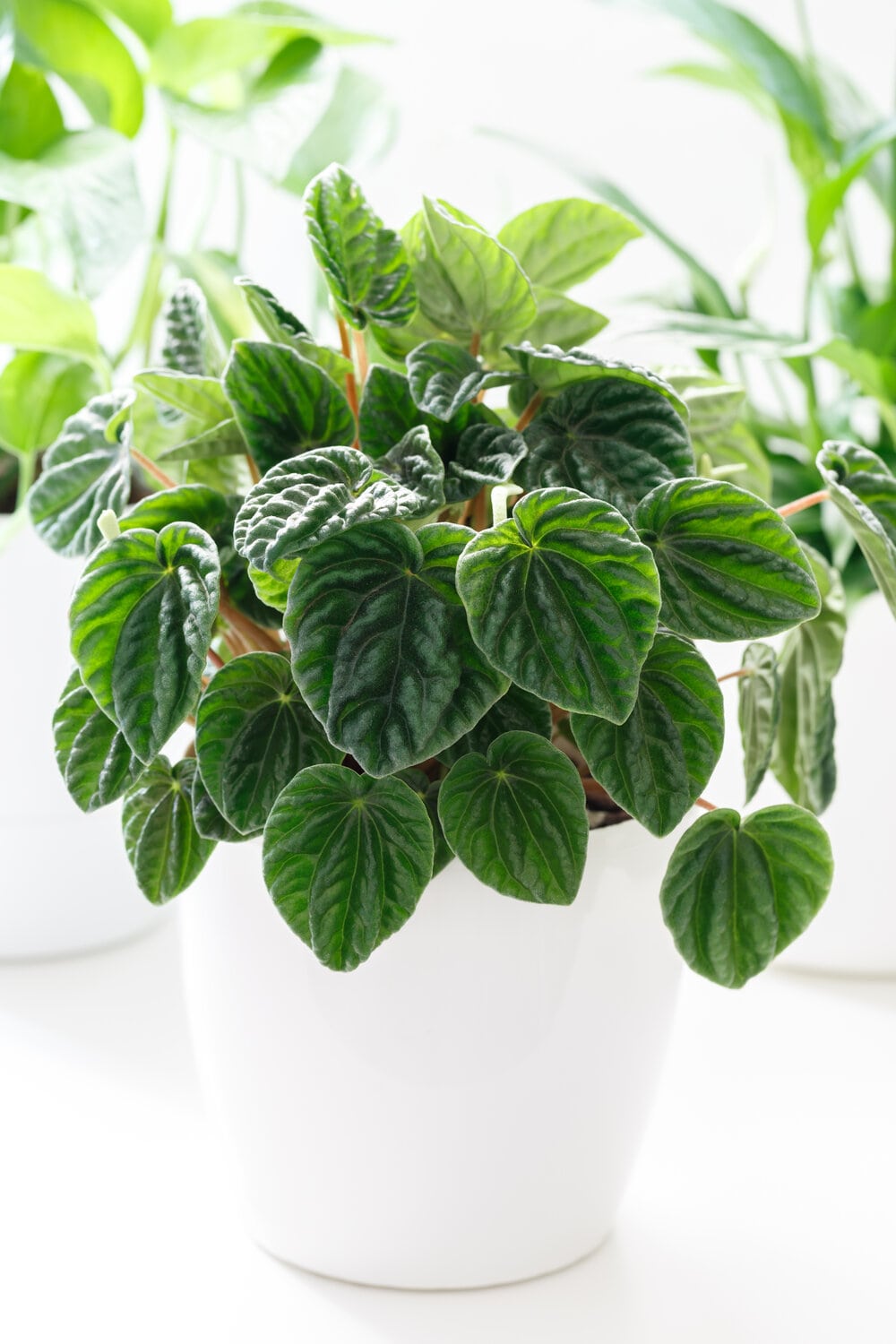 The emerald ripple peperomia boasts heart-shaped leaves that are bright green and appear to be crumpled. The stems are a bit pink in color and are short, so the plant will take on a rounded, bushy appearance. The emerald ripple is one of the many cultivars of the Peperomia caperata plant. 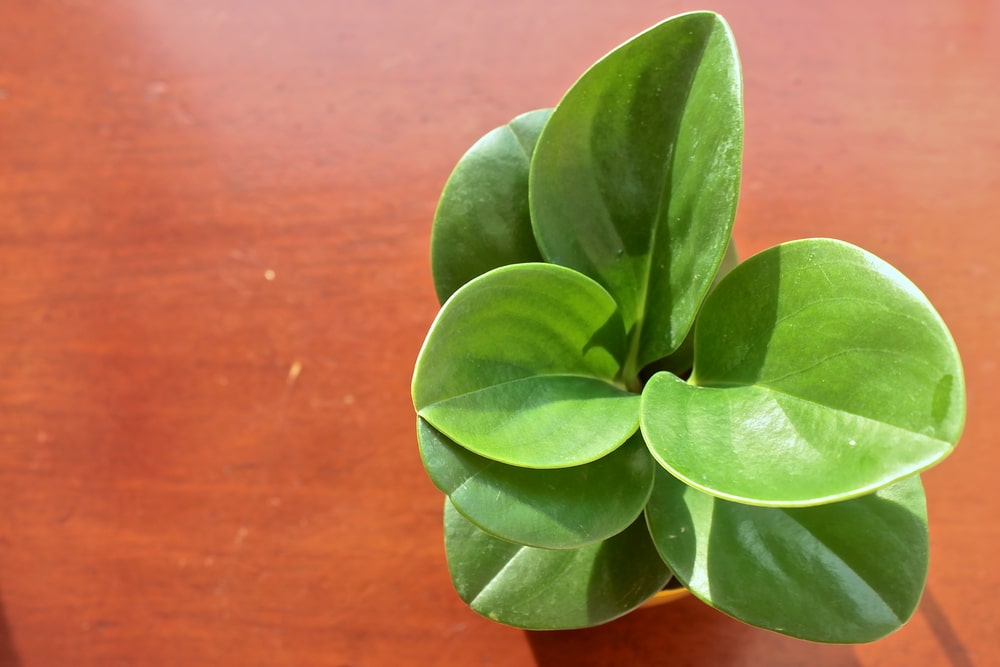 The felted pepperface gets its name from tiny white hairs that appear on some cultivars. However, there are some shiny versions of Peperomia incana that don't look fuzzy, but they do have the same wide oval shape. The shiny version is bright green, while the fuzzy kind is a muted green. This plant can grow up to 1 foot (30.48 centimeters) when it's happy in its growing conditions. 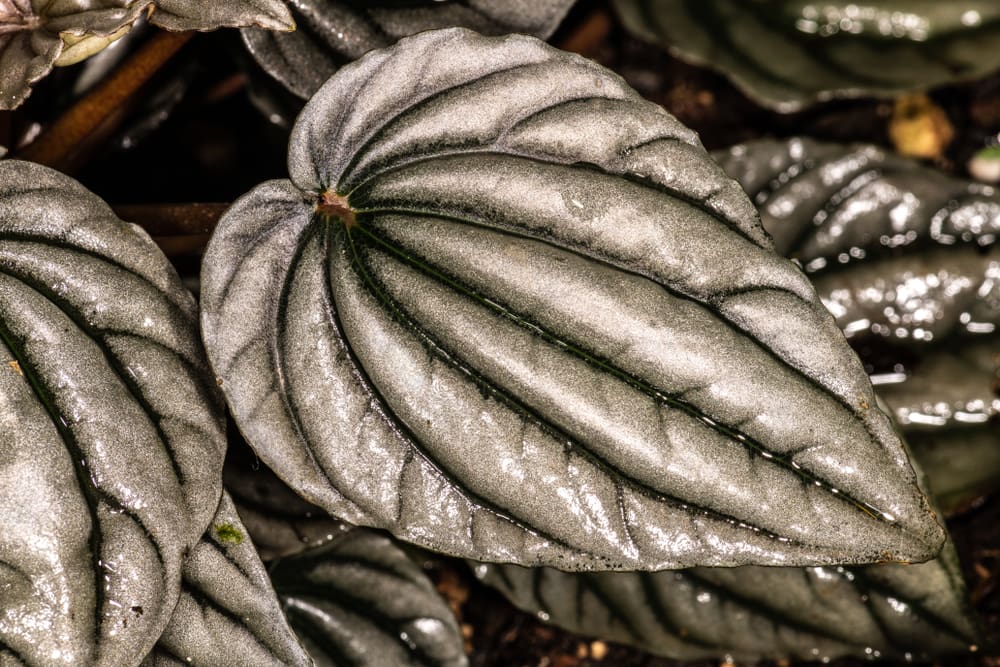 Ivy peperomia is a striking peperomia variety that exudes elegance. The muted grey-green leaves are contrasted with dark stripes and tan stems and have the shape of a tall heart. The plant is short, so it will take on a rounded shape as it grows. 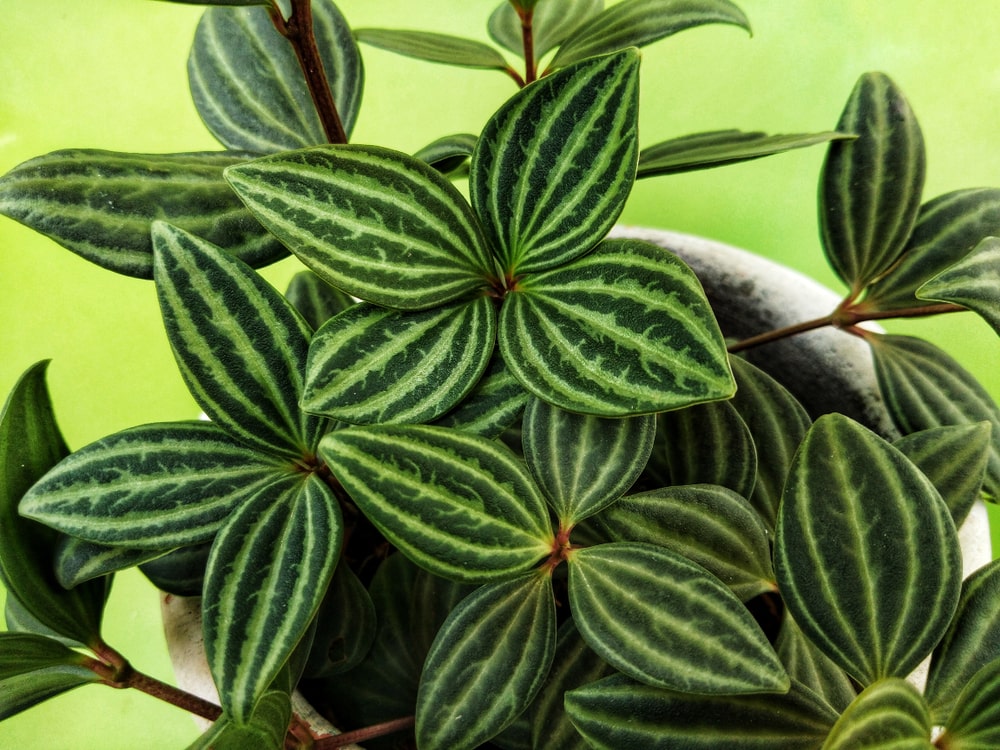 The parallel peperomia is the Peperomia puteolata and gets its name from the stripes of light and dark green that are almost parallel on the leaves. The stems are red and can grow to be as long as 16 inches (40.64 centimeters) in the right conditions. The leaves resemble a watermelon but shouldn't be confused with Peperomia argyreia, which we'll discuss later. 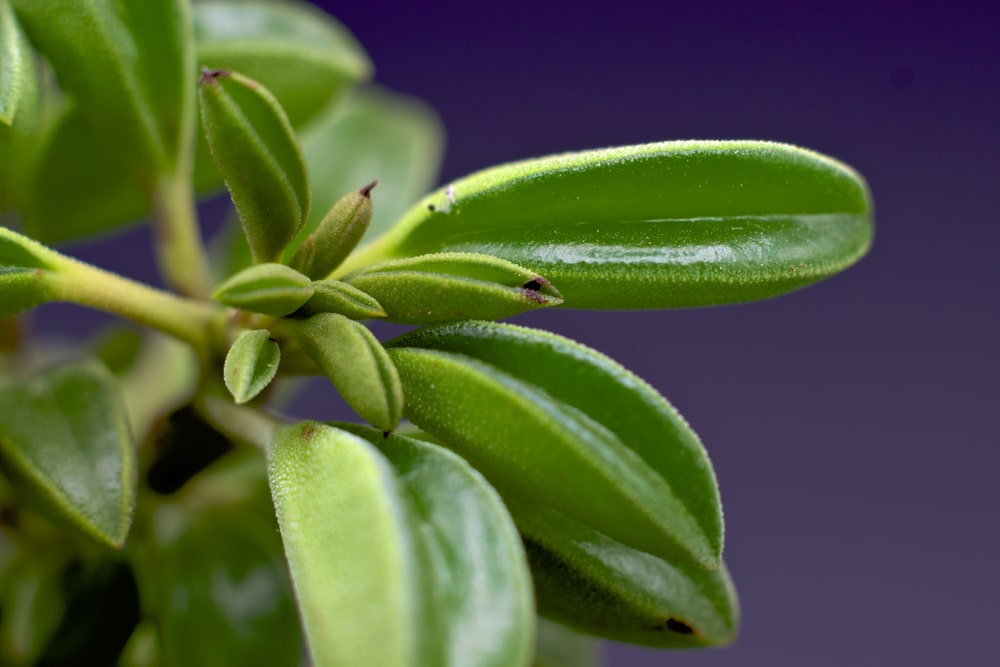 The Peperomia asperula is a unique peperomia variety because it grows tall and has elongated leaves. The leaves are succulent and look like little tacos or tongues. The leaves may be solid green, but variegated varieties can have pink or white with green. This plant needs similar care to other peperomia varieties, but you may find that it's more susceptible to being overwatered. 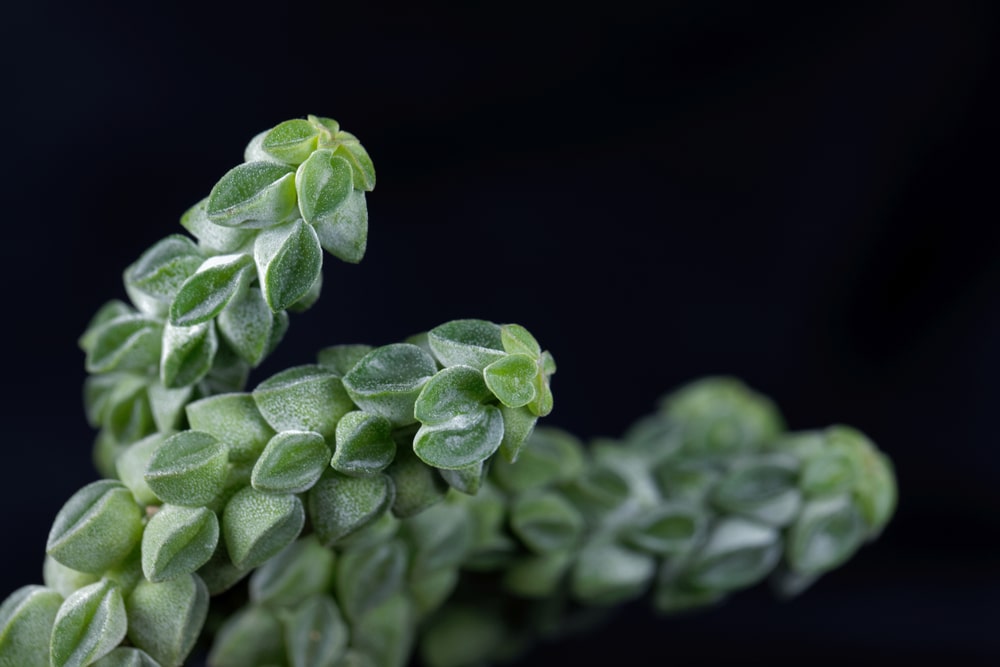 You may not recognize the Peperomia columella as being in the peperomia family due to its cactus-like growth patterns. This plant grows thick stems covered in tiny, succulent leaves that are light or dark green. The stems can reach up to 8 inches (20.32 centimeters) and will take on interesting shapes as they lean over and reach back up toward the light. 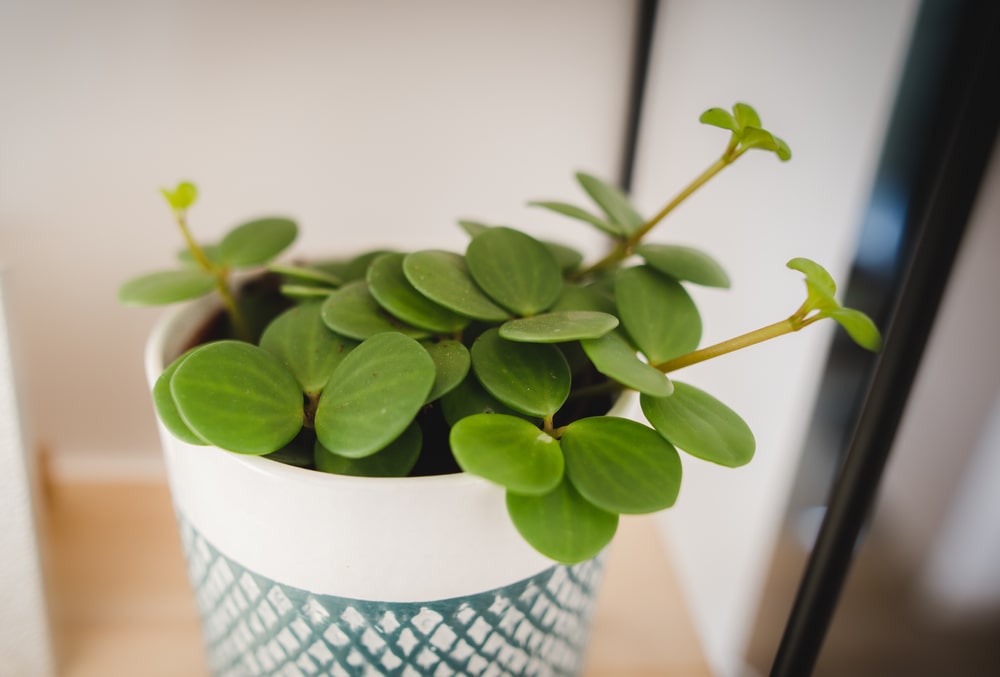 Peperomia Hope, or Peperomia tetraphylla, is a trailing variety that will look beautiful in a hanging basket. The small leaves are flat and circular and boast a beautiful bright green. If you buy the plant when it's small, the vines will grow upward at first but will spill over the sides of the container as they mature and grow longer. 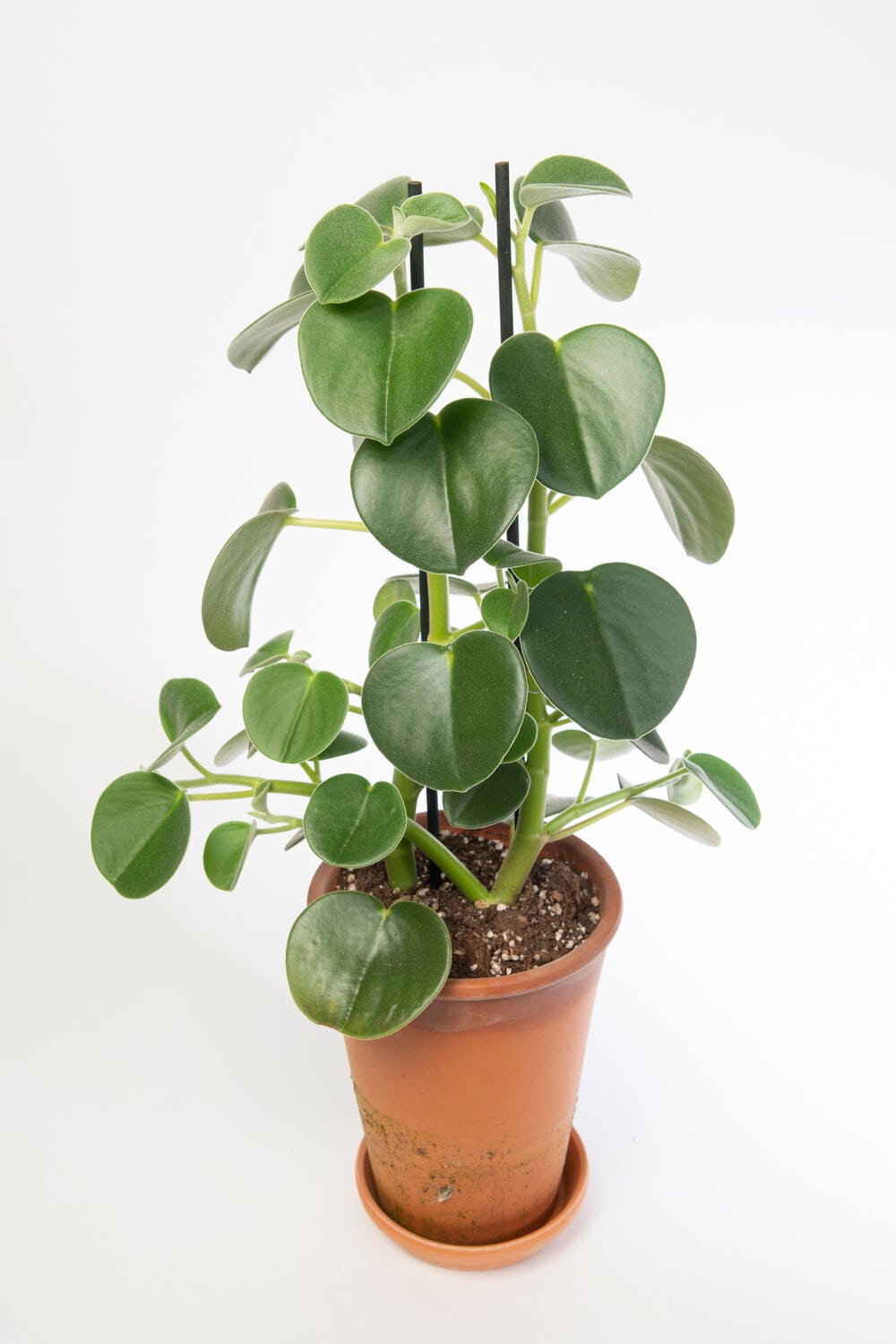 Peperomia hovaria is a hard-to-find variety. It grows taller than most peperomia varieties and has large, rounded leaves. The glossy leaves have a beautiful shine that you won't be able to resist looking at. The long stems can be put on a small trellis to make the plant look tall, or you can let them hang over the sides of the pot. 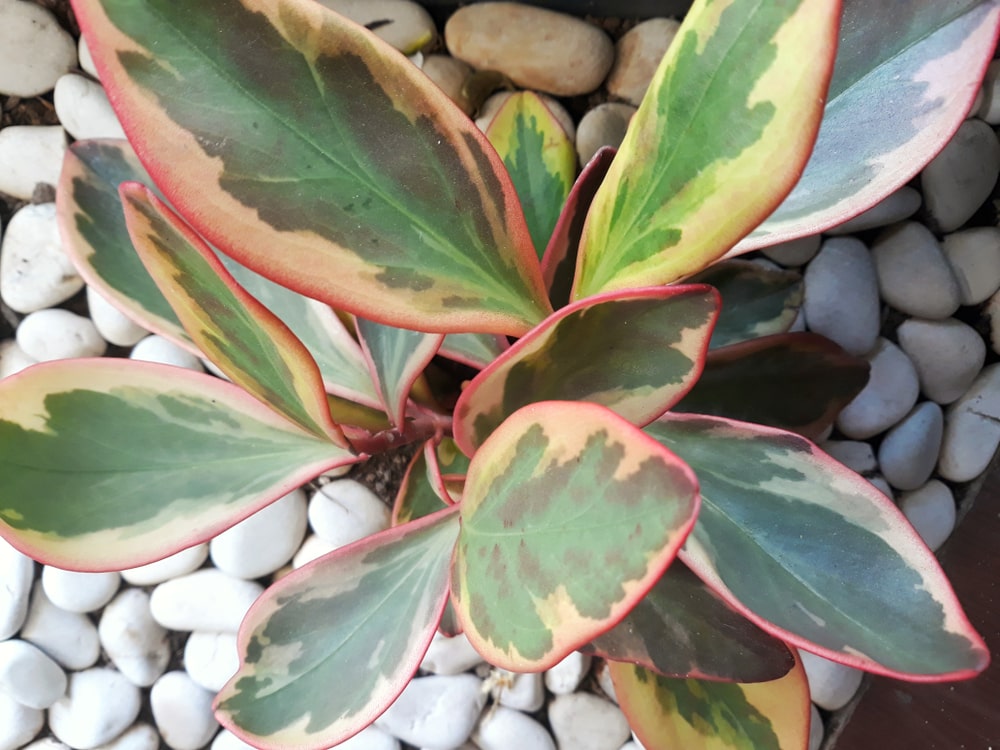 If you're looking for a colorful plant that will add some interest to a bland room, try the Peperomia Jelly. This variety is Peperomia clusiifolia and is sometimes called the jellie plant. The variegated leaves are like a traffic light with red on the outside, yellow in the middle, and green in the center. The leaves are oblong with slight points on end, and the stems are the same red as the edge of the leaves. 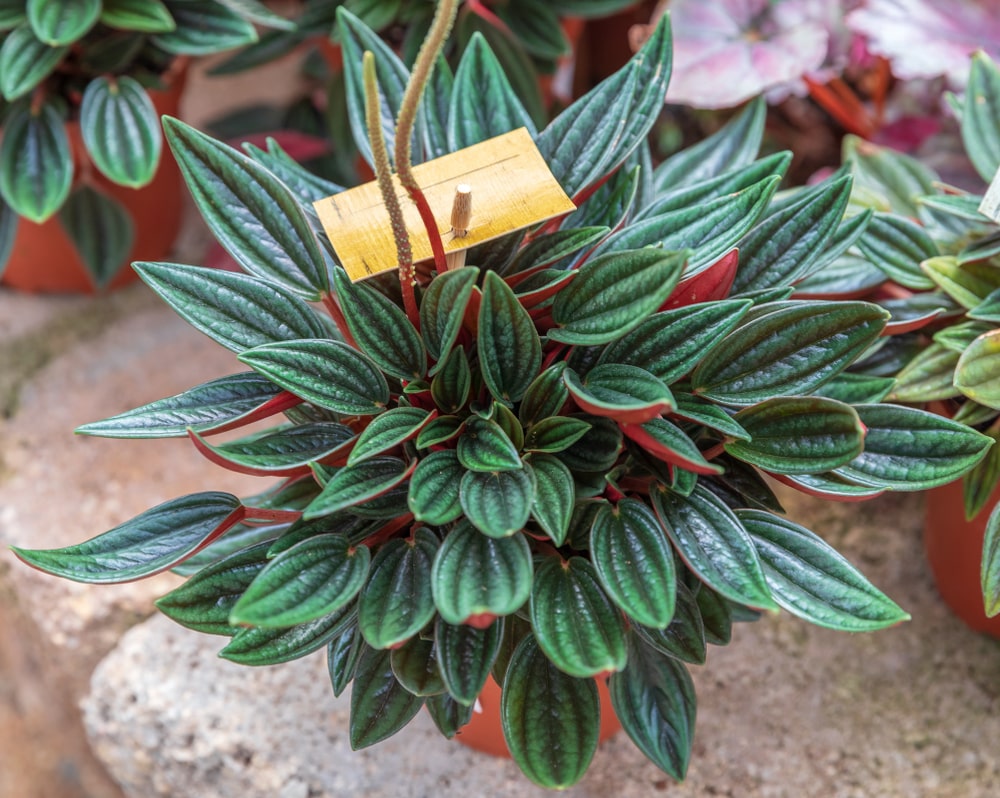 The Peperomia Rosso is a cultivar of Peperomia caperata. It looks a bit like a holiday plant with its dark green leaves on the top and red underneath. The stems are also red which gives this plant a beautiful contrast. The stems are short, so the elongated leaves will take on a spiky ball shape that will surely add interest to any room. 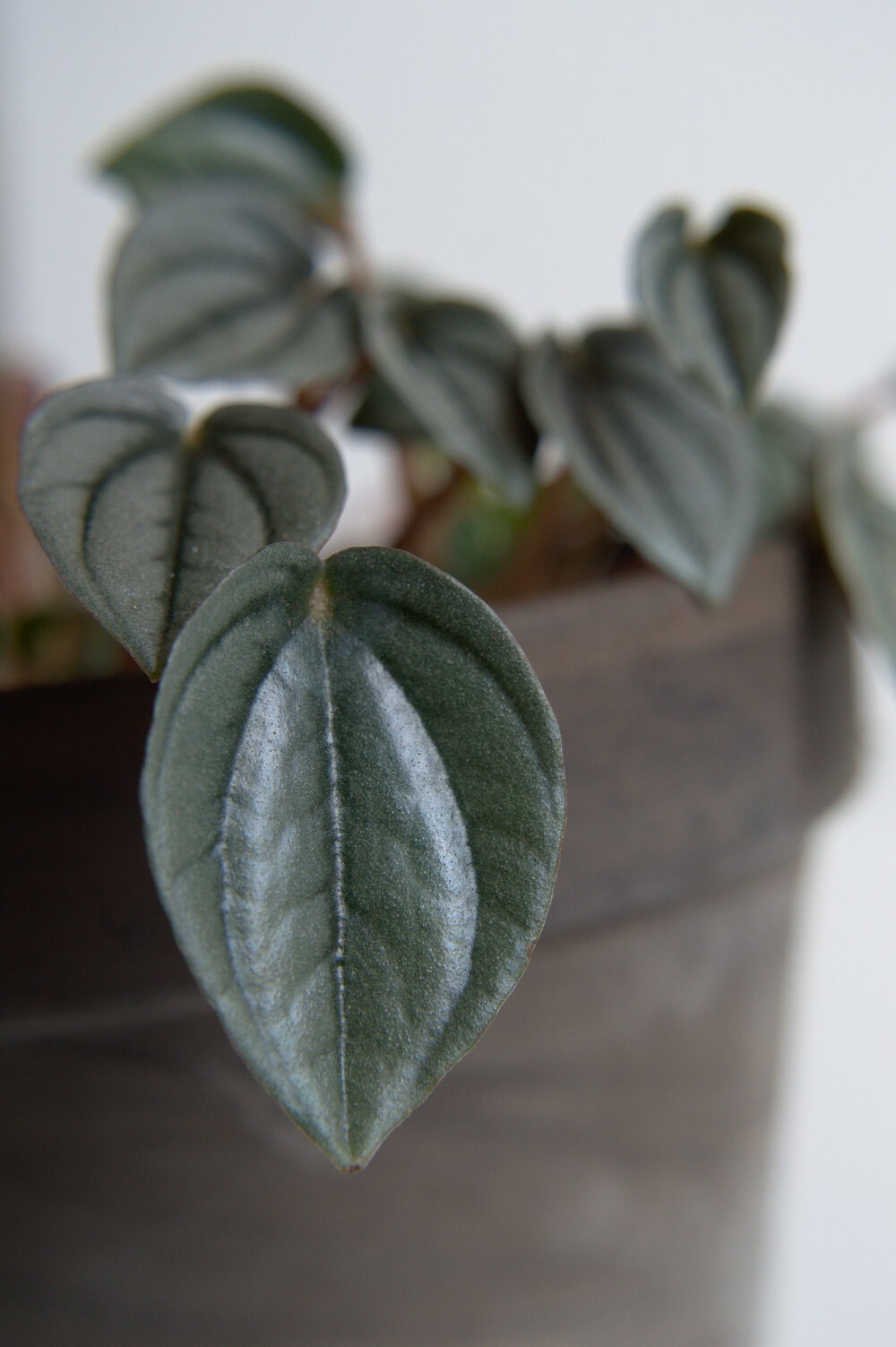 The piccolo banda, or Peperomia albovittata, is another peperomia variety that has a watermelon pattern. This one, however, is a grey-green color. Some varieties may be slightly pinkish. The leaves are more defined with a rounder base and a sharper point at the opposite end. Like other varieties, the stems are short, and the plant will take on a bushy shape. 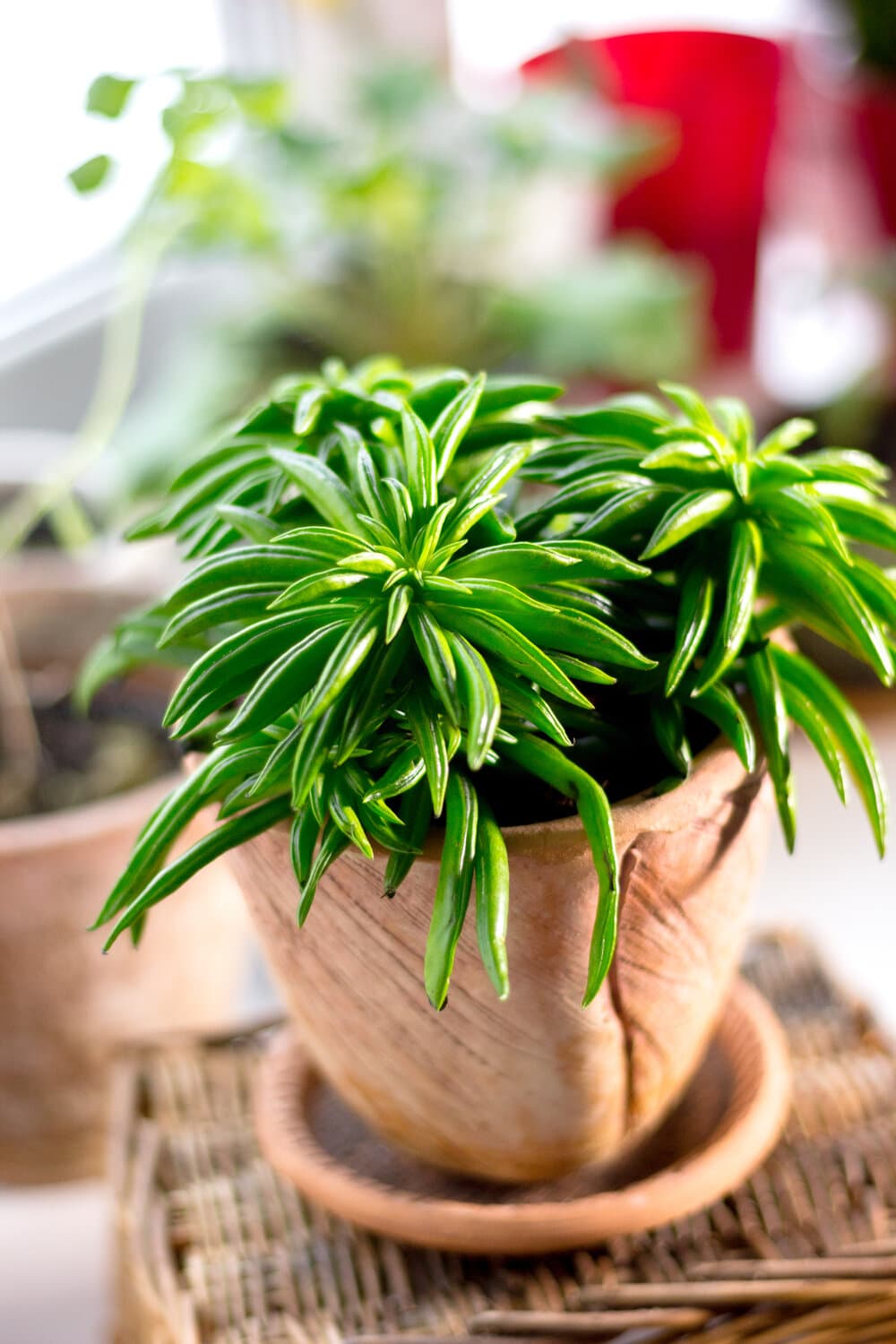 The pincushion peperomia has spiky leaves that resemble green beans. Clusters of leaves will grow on a single stem and will lean outward, kind of like palm tree leaves. The succulent leaves are a bright green and will grow longer as they mature. 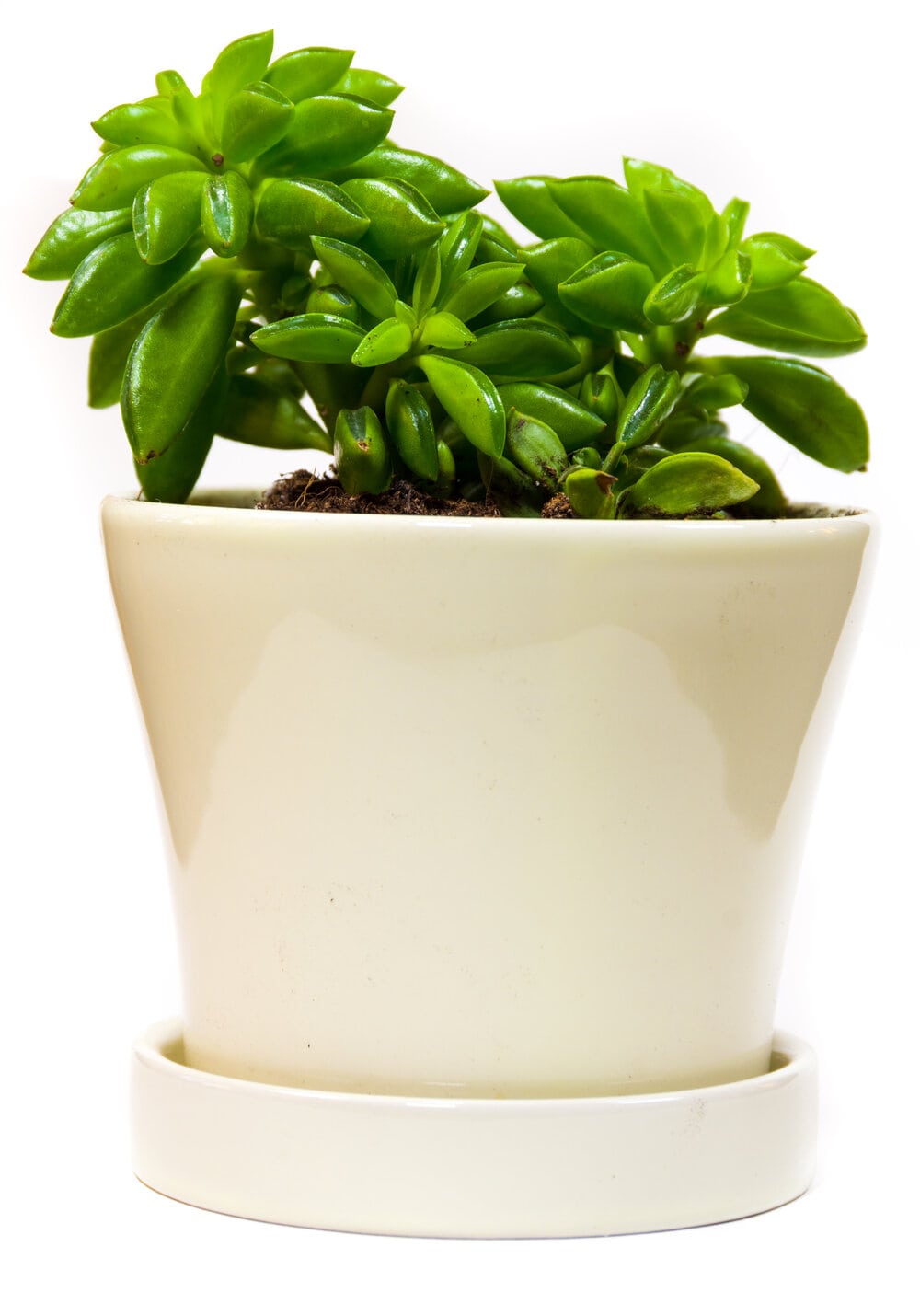 The prayer pepper looks a lot like the pincushion peperomia. The main difference is the short, plump leaves. Much like the pincushion, this one grows several leaves on one stem. Because of the succulent leaves, you shouldn't have to water them as often as other peperomia varieties. 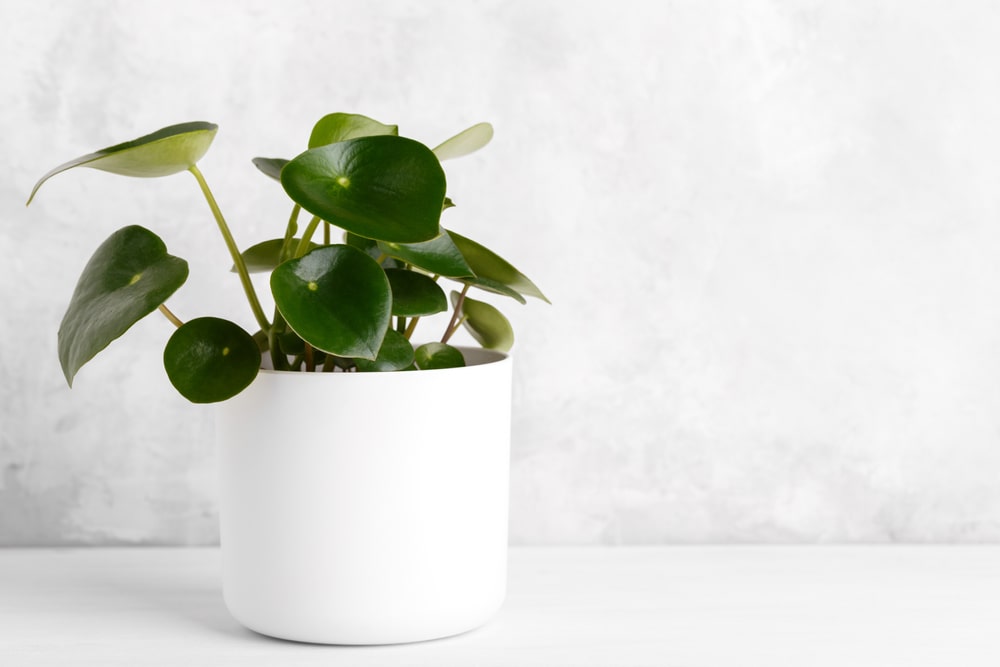 The raindrop peperomia is a shiny-leafed peperomia variety. It's a taller variety that can reach up to 1 foot (30.48 centimeters). The shiny leaves are usually dark green. They're heart-shaped and curl slightly on the edges. This plant is often confused with Pilea peperomioides, or the Chinese money plant, but they're two separate plants. 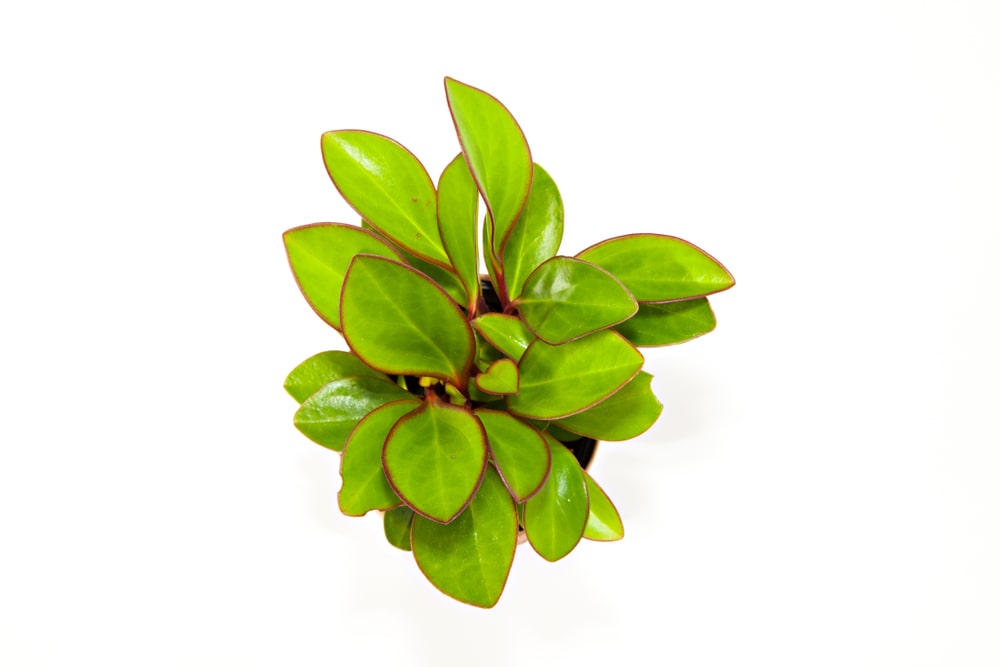 The red edge peperomia got its name on the red edges of the leaves. The leaves can be solid lime green or dark green and will be outlined with a deep red color that continues to the stem. The plant has long, wide oval leaves that are shiny. This tall plant can grow up to 18 inches (45.72 centimeters) tall. 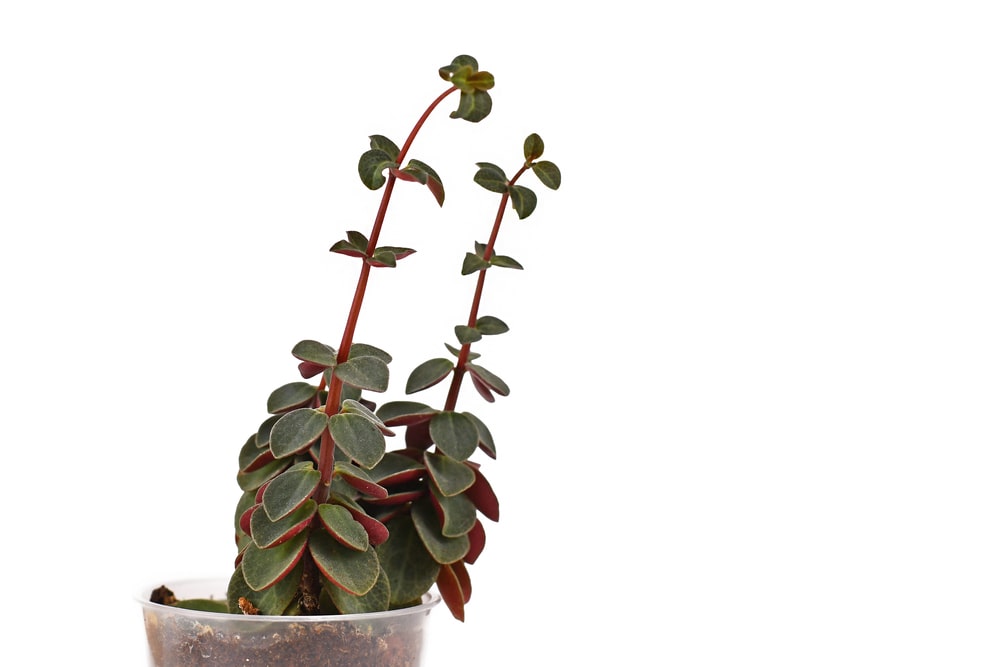 The leaves of the red log peperomia grow from a rosette around the center of the stem. The stems and undersides of the leaves are deep red, and the tops of the leaves are dark green. If the plant doesn't get enough light, it will grow tall with sparse leaves as it reaches for the sun. The leaves should be close together when it's properly cared for. 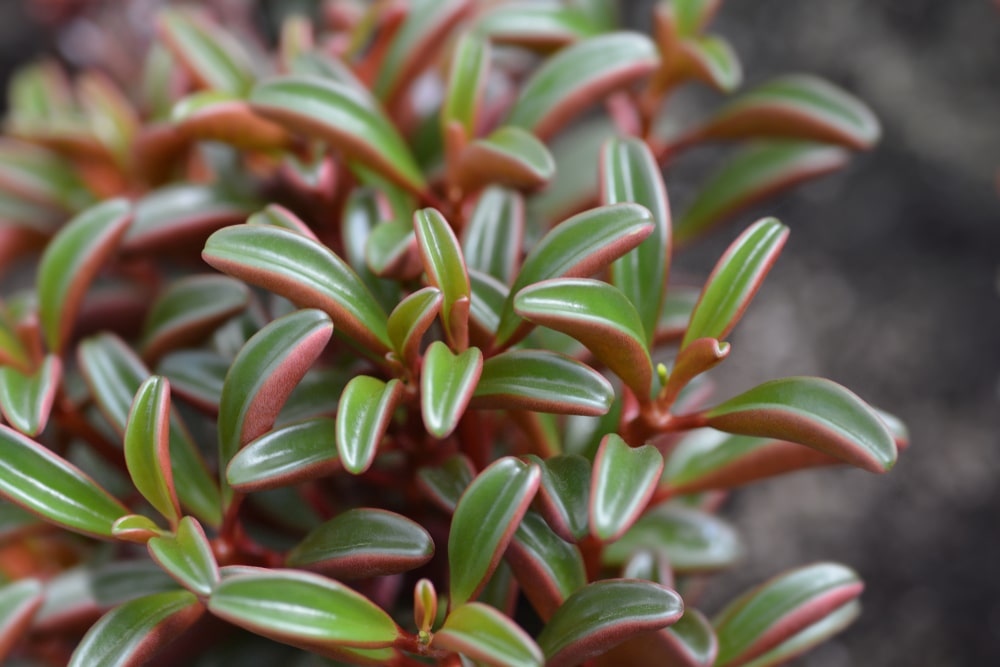 The ruby glow peperomia is appropriately named because of its bright red stems and leaves. The tops of the leaves are green, and the leaves curve inward. The plant can grow up to 10 inches (25.4 centimeters), but it may grow taller indoors if it doesn't receive enough light since it will stretch out toward the light. 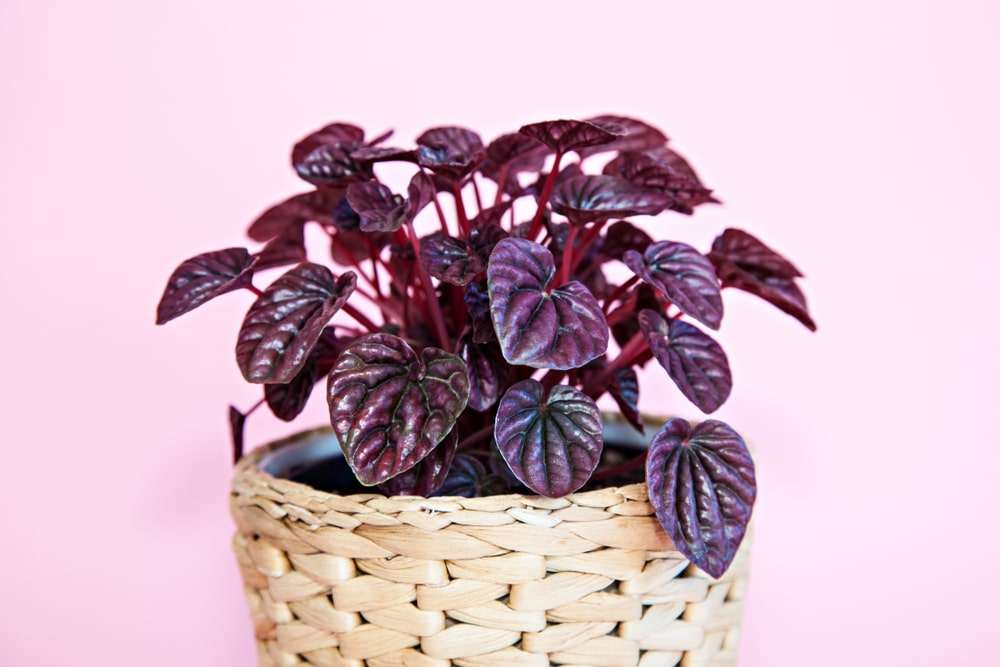 The ruby ripple peperomia will add a bold pop of color to any room. The plant has bright red stems and leaves that go from dark green to purple. The leaves are heart-shaped and have a wrinkled texture. The plant will form a rounded shape since the stems are short. 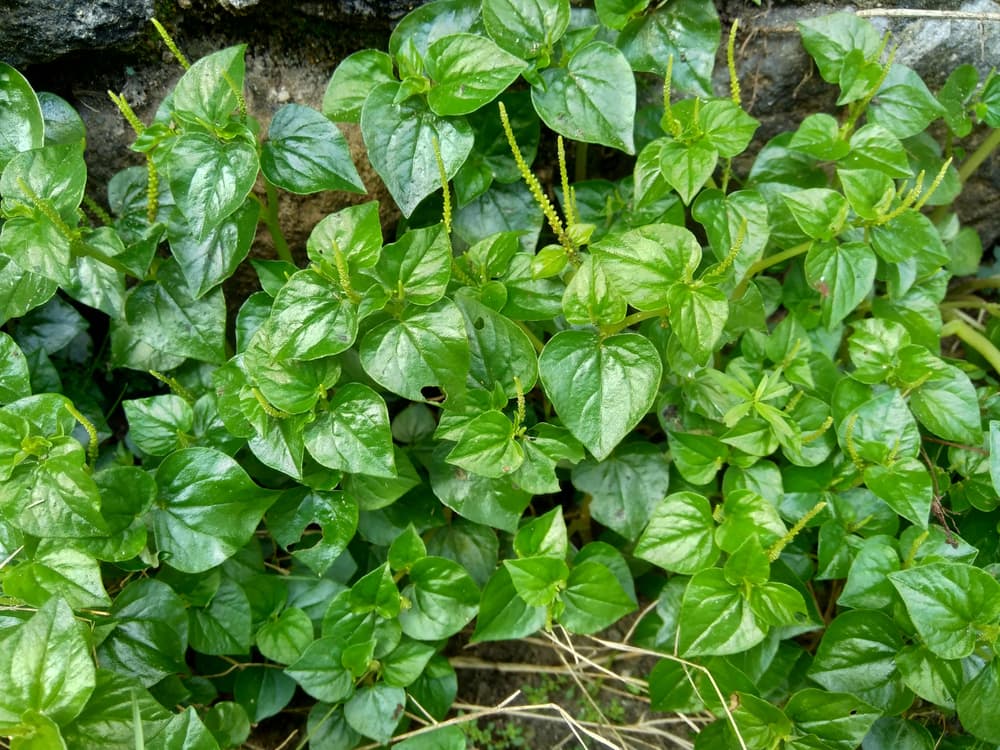 The shining bush plant can be grown indoors as a house plant, but it's often used as a medicinal herb. The plant has shiny green leaves that take on the shape of hearts and smells sort of like mustard when the leaves are crushed. The vines can grow up to 17 inches (43.18 centimeters) long when it's grown in the proper conditions. 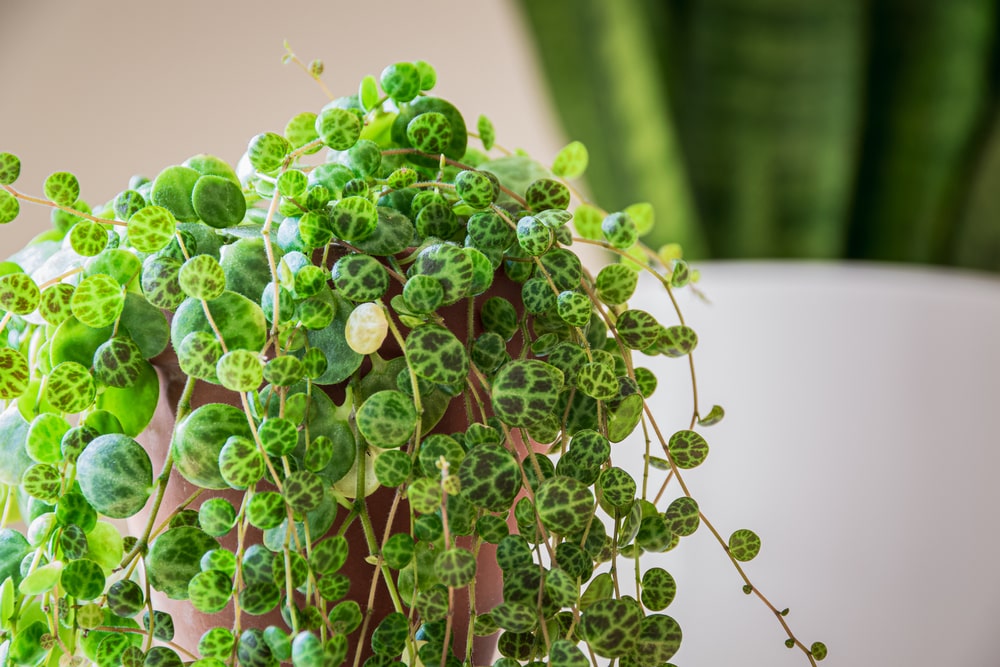 The string of turtles is a popular plant among house plant collectors. The flat round leaves have a pattern that looks like a turtle shell. The vines will grow very long and will look like a waterfall as they spill out of a hanging basket. The vines can be trimmed once they reach your desired length. 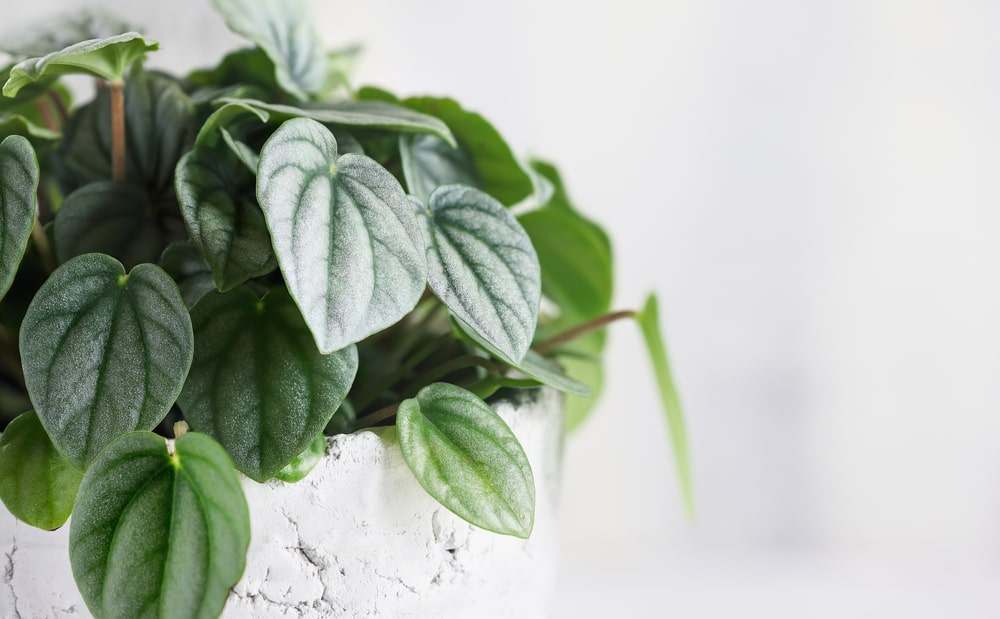 The teardrop peperomia, or Peperomia orba, has teardrop-shaped leaves. They can be light or dark green or grey-green. The leaves are slightly fuzzy, which gives them a velvety feel. Like most peperomia varieties, the stems are short, which gives the plant a bushy look. 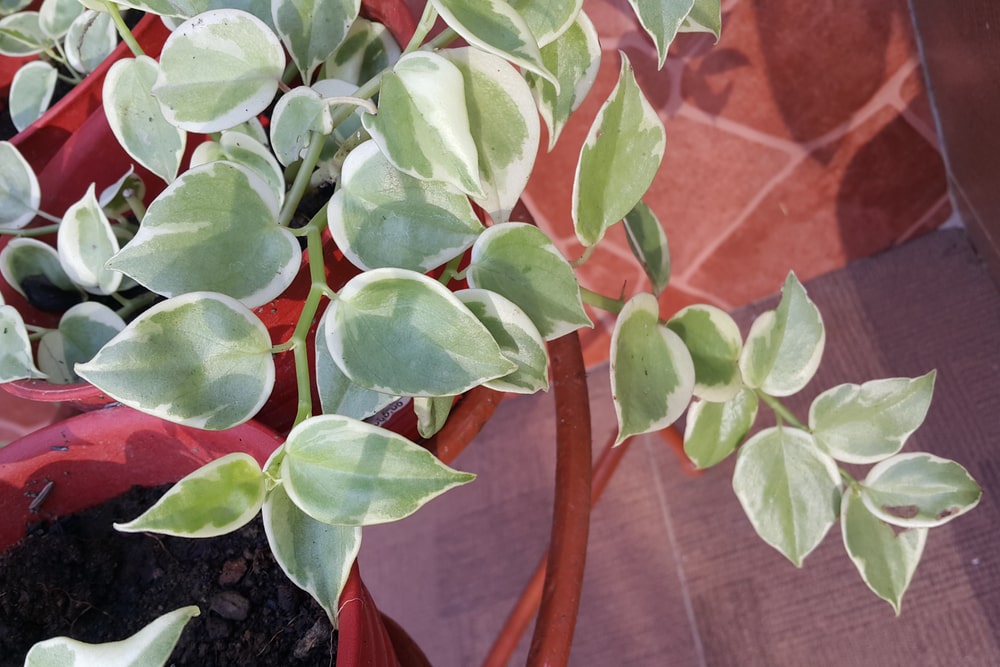 Peperomia serpens is known as vining peperomia and is favored for its beautiful trailing vines that look great in a hanging basket. Some cultivars are solid green, but variegated varieties can be green in the middle with white edges. Leaves are teardrop-shaped, but some varieties have more rounded leaves than others. 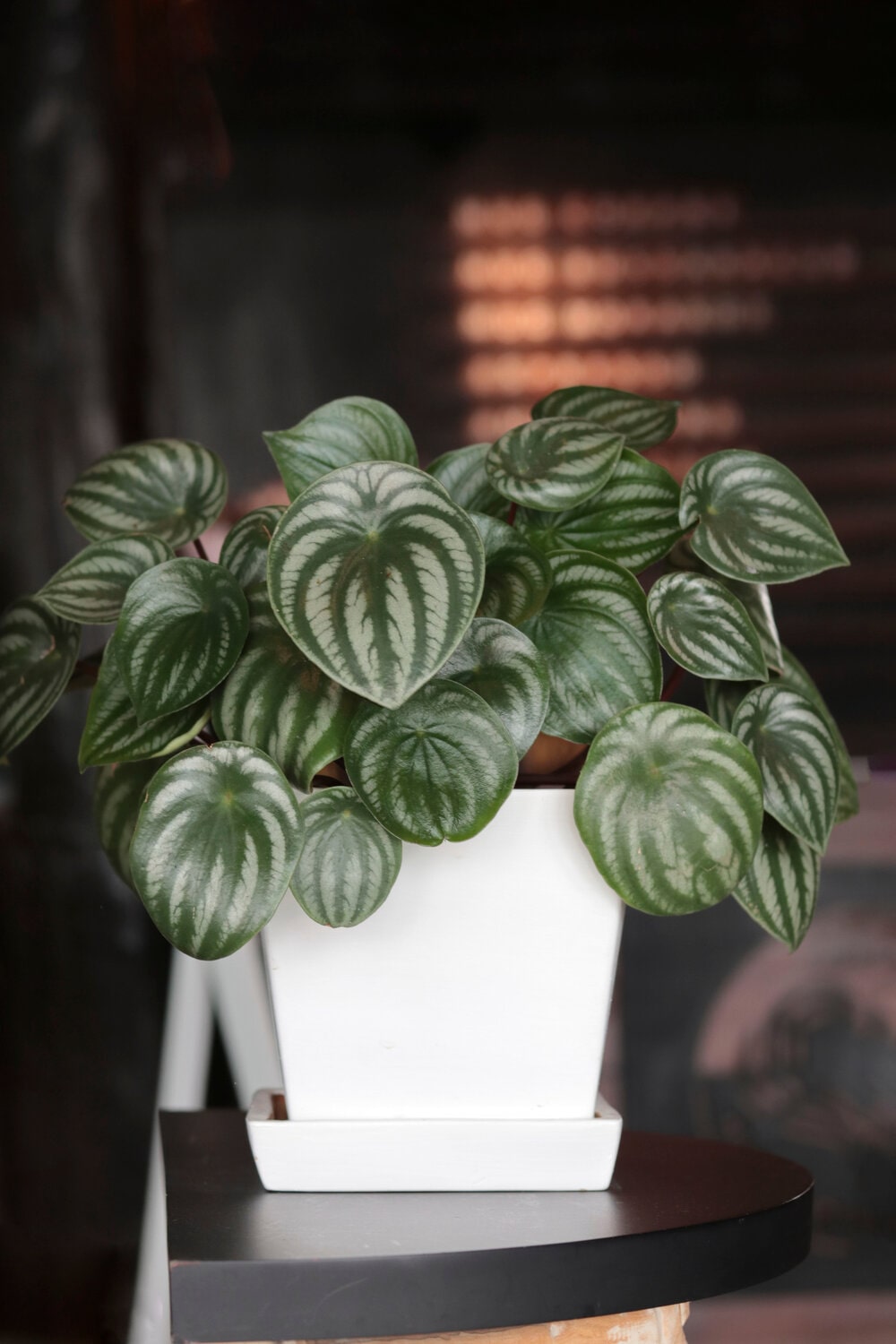 The watermelon peperomia (Peperomia argyreia) has leaves that look like watermelons. Some of the leaves give an amazing 3D effect, so your little pot of peperomia will look like a miniature watermelon patch. The leaves are teardrop-shaped, but some end up round on the end instead of with a point. 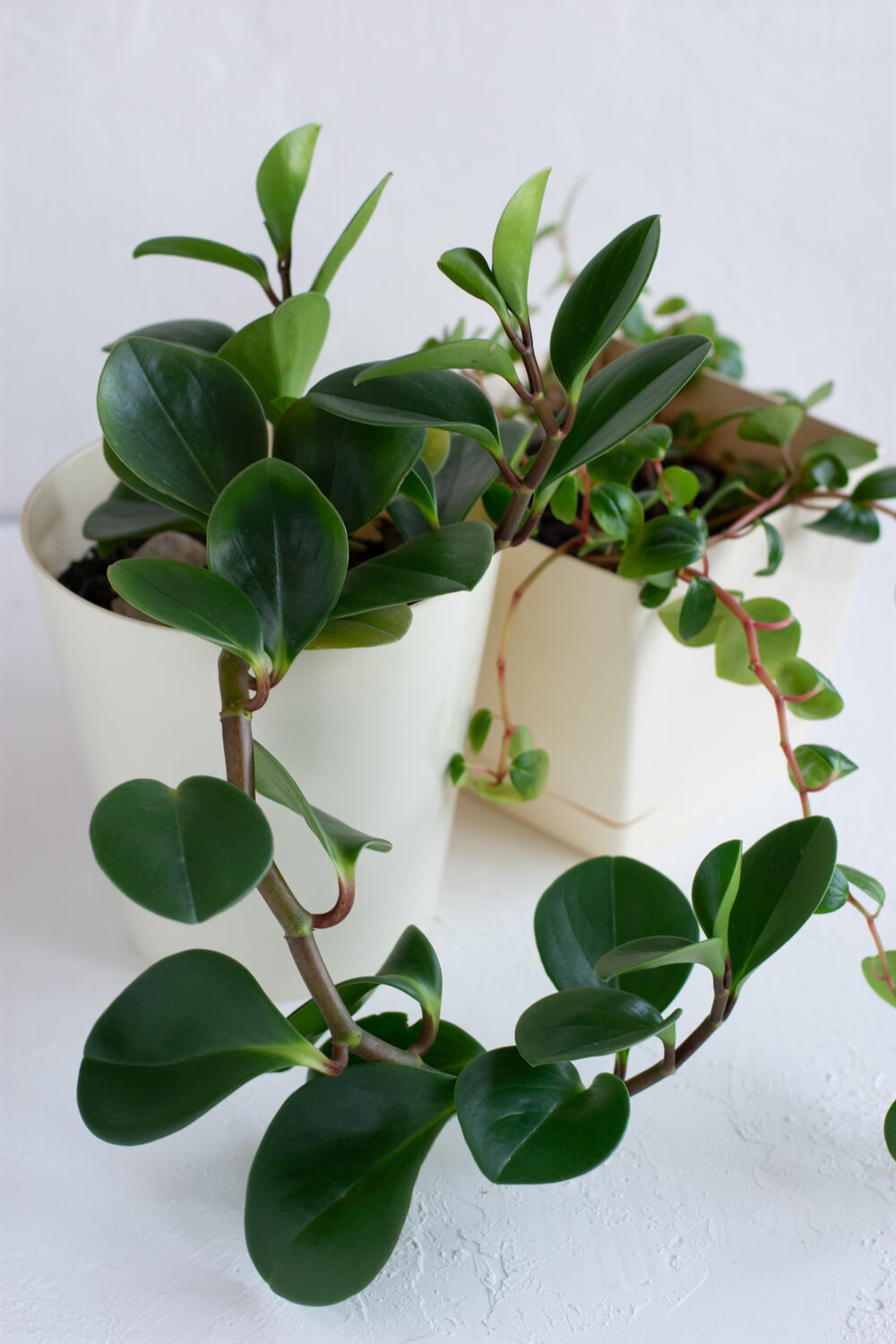 The wax privet peperomia is a trailing peperomia variety. The dark green glossy leaves will look beautiful as they trail out of the pot. The stems are red or brown and offer a subtle but elegant contrast against the leaves. One stem will have several leaves, so it won't have a rounded look that other varieties have.