No pantry is complete without an array of salted nuts. But do you have any idea where, say, cashews actually come from? Cashews grow on tropical, evergreen trees of the species Anacardium occidentale.

Few people know that what we think of as a cashew is only part of the tree’s fruit! The other portion is known as a cashew apple (and it’s also edible). Also, cashew “nuts” aren’t even true nuts.

Rather, they’re a type of fruit called a drupe. Other drupes include cherries, olives, and peaches. Nut or not, cashews are undeniably delicious. So why not learn how to grow cashews of your own?

It’s easier than you might think! But there are also plenty of reasons to continue getting your cashews from the local grocery store. 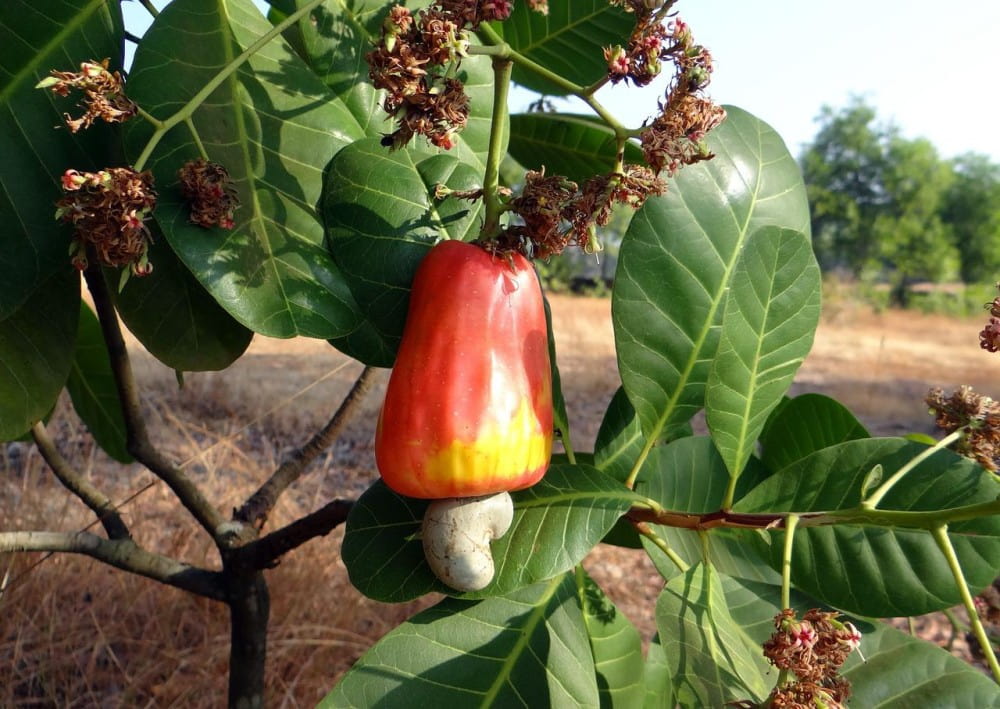 How To Grow Cashews At Home

All cashew trees belong to the species Anacardium occidentale. But within this species are several cultivars and varieties.

Most cultivars are only available to commercial orchards — these cashew trees have been selectively bred for qualities like fruit size and flavor. Home gardeners interested in growing cashews often start with a seed of seedling of unknown genetic origin.

For the best results, plant cashews at the beginning of your area’s wet season. Place seeds or young trees in a location that receives light or moderate rainfall to prevent overwatering. 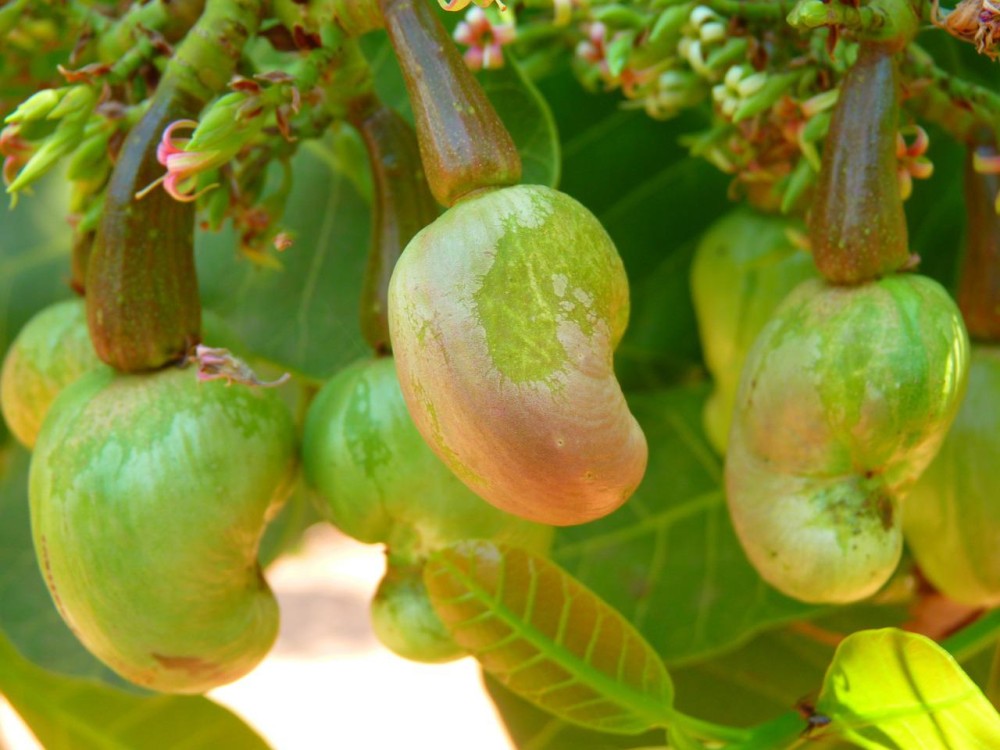 You can’t grow a tree by planting a roasted and salted cashew from the grocery store. You can, however, purchase raw cashew nuts (seeds) for planting.

Cashews intended for planting should have been harvested within the past 4 months. Allow freshly harvested seeds to dry in the sun for several days.

Before planting, soak the seed in water overnight for stratification. Most viable cashew seeds germinate within 3 weeks.

Cashew trees started from seed can take up to 5 years to produce any fruit. 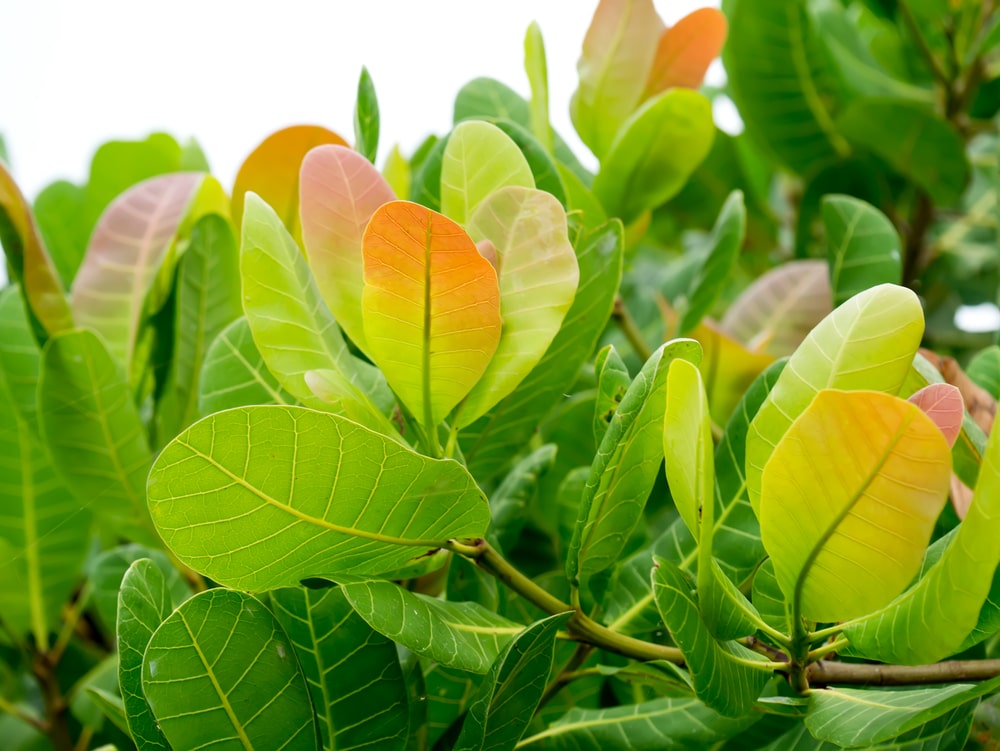 Alternatively, you can start a cashew tree by planting a seedling. Trees grown from seedlings usually produce fruit within 2 to 3 years. 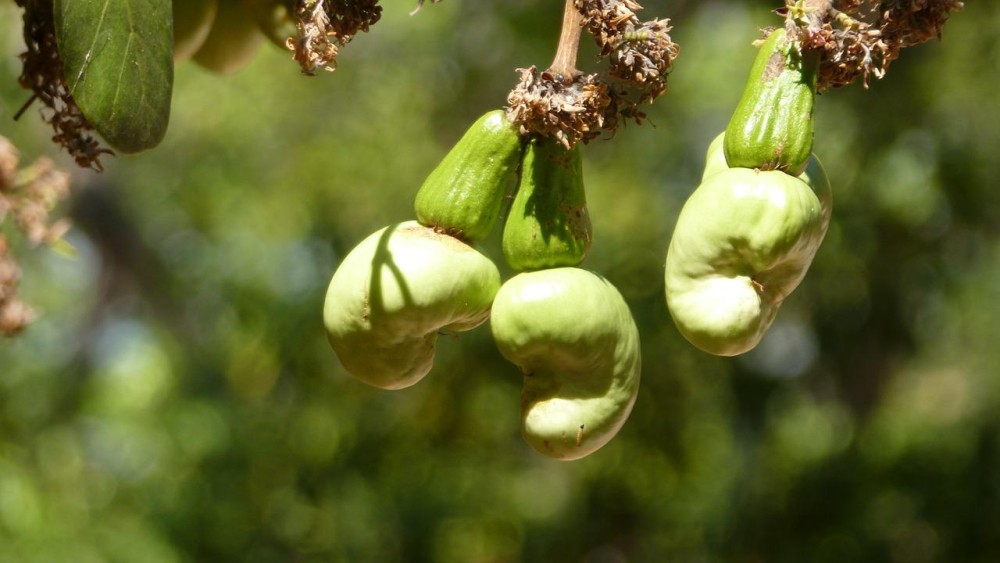 Cashew trees are relatively uncommon throughout much of the world because they require a very specific environment to grow. When these needs are met, however, cashew trees are known to grow like weeds!

The largest barrier to growing cashews of your own is climate. Cashew trees are native to Brazil, and nearly all cashew tree orchards — both private and commercial — are located in the tropics.

Cashew trees can technically survive anywhere that does not experience frost. Ideally, the temperature should stay above 50°F year-round. Avoid extremely high temperatures above 105°F as well.

In the United States, cashew trees are considered hardy in USDA zones 10 and 11. They can survive in parts of zone 9 with adequate winter protection.

Cashew trees prefer soil with a slightly acidic pH of approximately 6.0. You can use a simple soil testing kit to determine your garden’s pH level and amend it if necessary.

Since cashew trees are naturally drought resistant, it’s important not to overwater. Planting in sandy, fast-draining soil will lower the risk of drowning your cashew tree.

Your cashew tree’s irrigation needs will change with the season. Typically, supplemental watering is only necessary during long periods without rain.

For cashew trees grown under cover or indoors, water periodically when the soil around the tree is completely dry.

Cashew trees are full-sun plants. Place your cashew tree somewhere it will receive at least 6 hours of bright, unfiltered sun every day.

Insufficient light may not kill off your cashew tree. However, it can severely impact the amount of fruit produced in a season.

Fertilize throughout the growing season using a formula high in nitrogen and phosphorus. Ideally, you should apply a slow-release fertilizer (such as a granular formula) every other month according to the manufacturer’s directions.

Cashew trees are prone to zinc deficiencies. Monitor the soil around your tree and supplement as needed if it shows signs of nutritional deficiency.

When cultivating cashews outdoors, keep an eye out for common pests like borers, thrips, and tea mosquitoes.

Borers tunnel through the bark, roots, and fruit of cashew trees. These tunnels severely damage the tree’s structure and can ruin the cashew apple and nut before they are harvested.

Thrips target the undersides of cashew leaves. Tea mosquitoes suck sap from all parts of the cashew tree, leaving behind blisters at the site.

All of these pests can be effectively controlled with insecticides. Since severe borer infestations are almost impossible to reverse, preventative treatments may be required.

Cashew trees are susceptible to several fungal and bacterial diseases. Ensuring your cashew tree has proper drainage and that the leaves stay dry can go a long way in preventing disease spread.

While these diseases can spread quickly in areas where cashews are grown in large-scale orchards, home gardeners with only one or two trees may have an easier time controlling them.

When shopping for young cashew seedlings, inspect trees carefully for signs of fungal or bacterial infections.

You may prune your cashew tree to maintain its general size and shape. This type of pruning is most effective when trees are young.

However, the main role of pruning in cashew tree cultivation is to remove damaged or structurally unsound branches.

Cashew trees are considered self-fertile but not self-pollinating.

Simply put, this means that you only need to have one cashew tree in order to produce fruit. But pollinators still need to take the pollen from one cashew flower on your tree and deposit it in another.

Insects, birds, and the wind will do most of the work for cashew trees grown in the landscape. Manual pollination is also an option.

The nuts are usually ready to harvest about 2 months after the cashew apples start to form. You can also wait for the cashew nuts to fall from the tree on their own.

Cashew fruit starts out bright green. Ripe cashew nuts have a gray appearance. You’ll also notice the apples take on a red or pink color when they are ready.

Pro Tip: Wearing thick gloves and long sleeves will protect you from accidental exposure to the caustic oil in raw cashew nuts during the harvesting process.

Harvested fruit should be divided by twisting the nuts from the cashew apples. Unprocessed cashew nuts can be stored for up to 2 years. The apples should be used promptly.

Why You Should NEVER Consume Raw Cashews 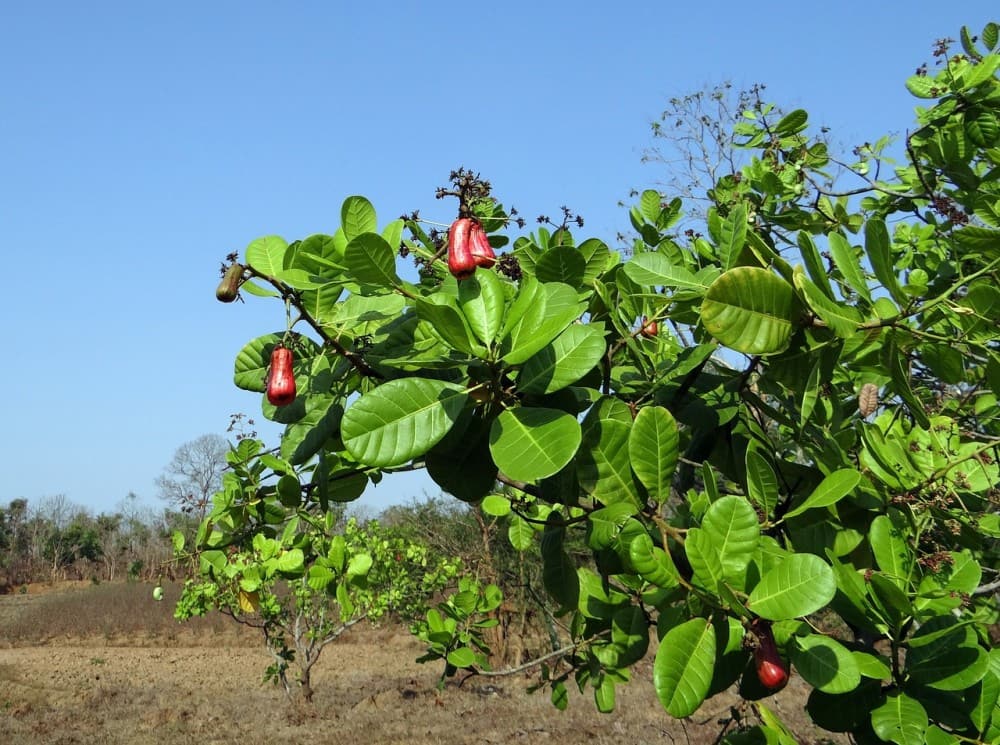 Given the right environment, cashew trees are surprisingly easy to cultivate. Harvesting the fruits of your labor is not so simple.

Both the cashew nut and apple are edible. However, the nut is surrounded by a hard, inedible shell and a layer of caustic oil that will burn the skin, eyes, and lungs (if inhaled). This oil, called urushiol, is so potent that hand protection is advised whenever you handle raw cashew fruit.

How To Safely Process Cashew Nuts

Cashew nuts cannot be eaten until they have been thoroughly cleaned and roasted. The nuts of several cashew trees may be sent off to a special processing center after harvest.

If you want to utilize the nuts from just one or two trees, however, it may be necessary to process them at home:

Can You Grow Cashews Indoors?

Cashew trees can be grown indoors assuming all of their needs are being met. This means you’ll need a large container as well as a bright, unobstructed window to supply adequate sunlight.

Start young cashew trees in a 10- to 20-gallon container. Use a sandy soil that drains very well.

Pro Tip: It’s a good idea to place your potted cashew tree on a rolling plant caddy. This will make it much easier to move the tree in its container.

Cashew trees tend to adapt to the size of their containers. However, light pruning will help keep the tree a manageable size and shape.

If you want your indoor cashew tree to produce fruit, you’ll need to spread pollen between the flowers. In the absence of natural pollinators, a cashew tree will not fertilize its own flowers. 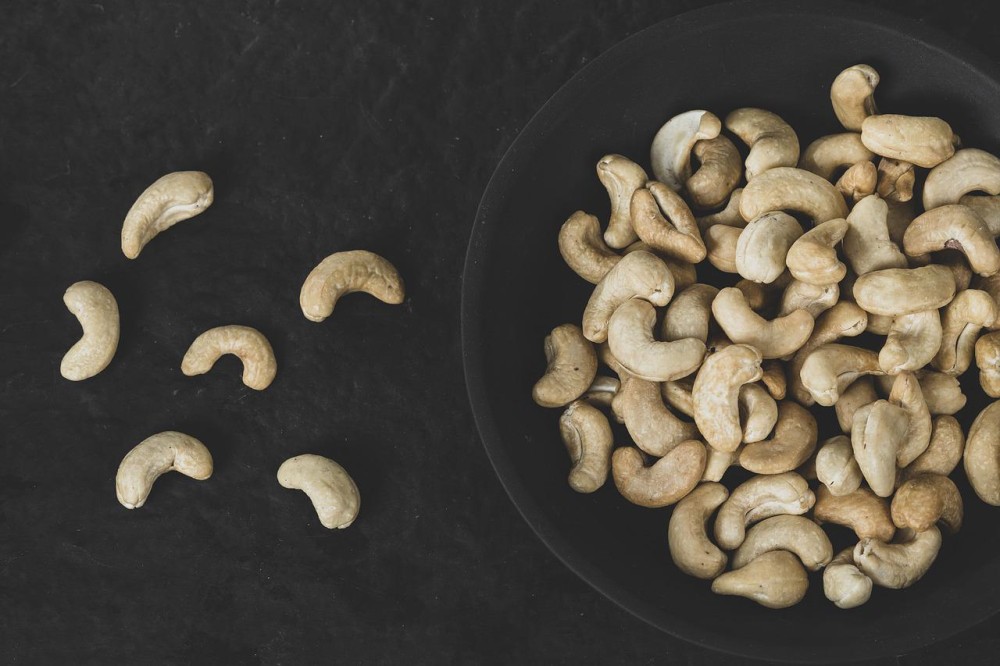 Even if growing a cashew tree of your own isn’t in the cards, it’s enlightening to learn about the involved in harvesting cashew nuts. Here are a few more interesting facts you should know about the cashew tree and its fruit: