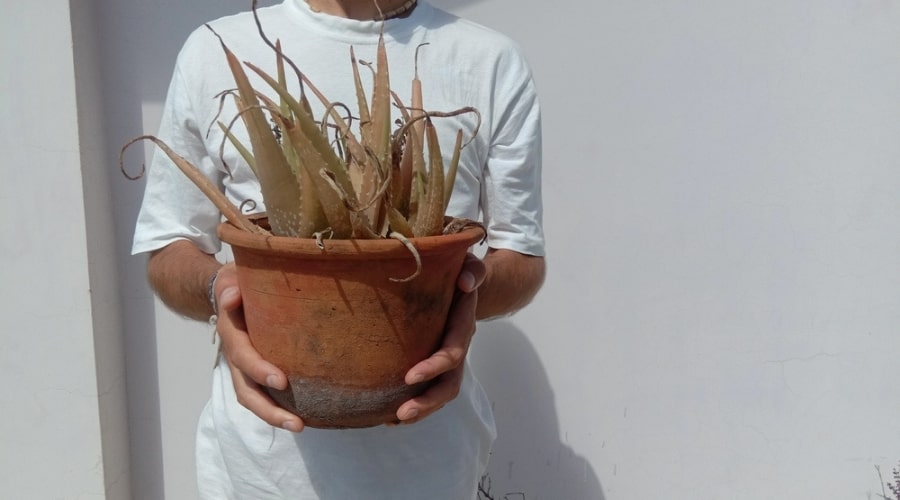 Were you told that aloe vera is next to indestructible, and it's a great plant to start out with? Are you now looking at a brown aloe vera plant through teary eyes? It's okay – it happens to all of us.

If you're prone to watering frequently or you lack a sunny window sill, that's probably what caused your little buddy to turn brown. Aloes are easy to care for if you can provide the right conditions for them. Unfortunately, not everyone can do that.

Turning brown isn't necessarily a sign of failure. That's your plant's way of communicating that something isn't right. If your aloe vera is turning brown, take a look at these 8 reasons why that might be happening.

8 Reasons Why Your Aloe Plant Is Turning Brown:

Overwatering is probably the most common reason aloe plants turn brown. If water is an indicator of a person's love for a plant, then people love their aloes too much.

Aloe vera is native to the desert areas of Africa. In these parts of the continent, the soil is rough and lacks nutrients. The most important part to note about its native habitat is that it doesn't rain often.

How to Save a Waterlogged Plant

If you water each week or every other week, your plant might be getting too much love.

Those who don't overwater probably don't water enough. If your aloe plant was previously overwatered, you might have overcorrected your mistake.

In an aloe vera's native habitat, it doesn't rain often, but it still does rain. The succulent leaves of an aloe hold water, but they can't hold water forever. If you find yourself unable to remember when the last time you watered your plant was, it's probably time to give it a drink.

When to Water an Aloe Vera

Stick your finger deep into the soil. If it's dry at your second knuckle, then it's time to give your plant a drink.

Give your plant a deep drink but make sure the soil is coarse and loose and that there are drainage holes at the bottom of the pot. It should never be allowed to sit in standing water.

In the winter months, you likely won't have to water very often.

If you fertilize your aloe vera, your plant may have received too much salt. When salt builds up in the soil, it can cause roots to burn and leave you with a brown aloe plant.

How to Save a Salty Aloe

You have to leach the soil to get rid of excess salt. Simply put, leaching gives your plant an excessive amount of water that will allow the salt to be washed away.

Take your aloe vera outside and fill up a container with warm (not hot!) water. The container should be double the size of the pot your plant is in.

Pour the water over the soil. Don't let it spill over the top of the pot.

Allow the plant enough time to let the water drain from the pot, so you don't end up overwatering your plant.

If you're growing an aloe outside, it may be turning brown due to exposure to pesticides or herbicides.

If the plant is indoors, it may have had cleaning chemicals spilled on it.

How to Save a Poisoned Aloe Plant

Remove the brown aloe vera leaves with a sterilized tool. Follow the same leaching process mentioned previously. If your plant is outdoors, leaching the area may be more difficult if you can't control the drainage.

Even a desert native can get sunburned. If your aloe vera spends too much time in direct sunlight, you'll see it turn brown until the situation is remedied. The plant will eventually die if it isn't given any protection.

How to Relieve a Burnt Aloe Vera

Humans turn to aloe vera for sunburns, so the least we can do is return the favor. If your aloe vera plant is turning brown on a window sill, move it to a table that's near the window.

If the plant continues to show signs of burning after a few weeks, move the plant further back. Or, buy a sheer curtain that will allow filtered light to come in.

For outdoor plants, you may need to rehome the plant to a different part of your yard or plant a taller, hardier plant next to it. You can also buy a shade cloth to put up during the heat of the day.

Aloes are desert plants, so no sun isn't an option. Bright, indirect light is ideal for aloe vera.

To remedy this, move it to a sunnier location. A south-facing window that allows bright light into the room but doesn't have direct rays is best.

Aloe vera plants will turn brown if they aren't kept warm enough. They'll die if planted outside in a place that doesn't have mild winters. If they're inside a room that's cold and drafty, that can kill them, too.

How to Warm Up Your Aloe Plant

Move indoor plants to a sunnier location or to a place that is away from a vent. A grow light may be able to solve your problem.

Outdoor plants should be brought inside if the winter temperature will dip below 41°F (5°C) because they can't survive in those temperatures.

Aloe vera plants can turn brown because of fungal infections. Root rot is caused by fungi which are caused by overwatering. Soft rot will cause spots on leaves. Tip die back will be on the tips of the leaves and is brought on by overwatering.

How to Prevent and Treat Aloe Vera Infections

The best way to prevent infection is not to over-water the plants. Pay close attention to their needs and only water them when the soil is dry.

Once a plant has an infection, you must get rid of the infected parts. Use a sterilized knife or shears. Follow the steps in the first point to change out waterlogged soil.