Thinking of upgrading your kitchen to a modern Victorian style? Think of lots of decoration and ornamentation in ceiling, floors, walls, and wherever else you can imagine. Decorating in this style is your opportunity to think outside the box. Today we look at 24 Victorian Kitchen ideas to help jump-start your creativity in designing your new kitchen.

The Victorian Period was an era that spanned from 1837 to 1901 and is an important part of the history of interior design.  Queen Victoria, known for her luxurious taste, was in reign.  Her rule naturally impacted the appreciated look in Interior Design of this time.

Moving forward in time, the modern Victorian aesthetic is still full of embellishments and a Victorian Kitchen is no different.  Key elements from this time period have been taken and updated to suit our present-day needs and desires.

24 Victorian Kitchen Ideas to Get You Inspired: 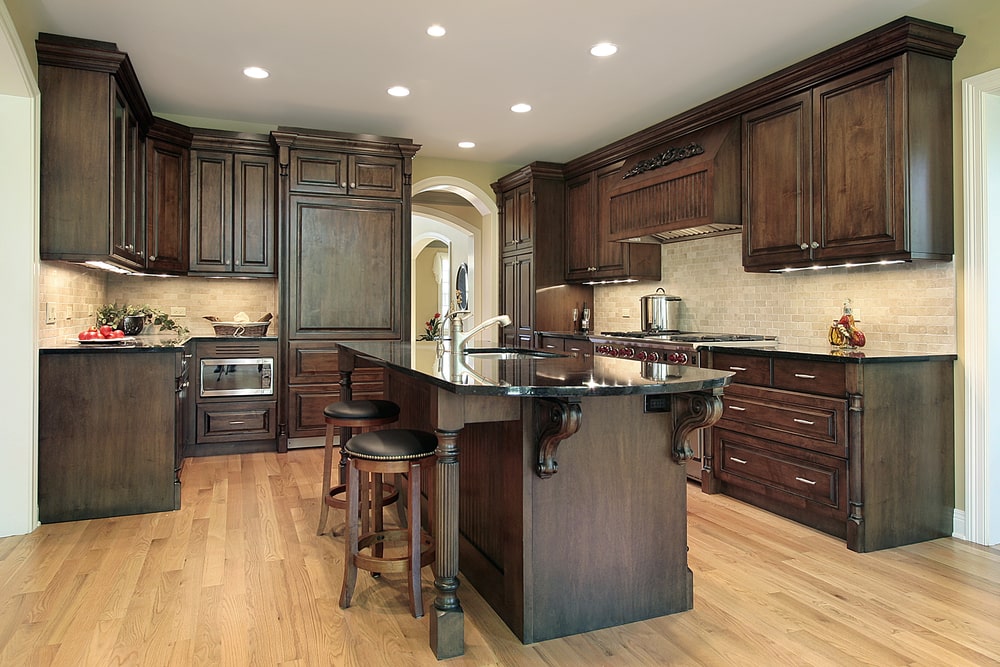 A popular detail during the Victorian era was the S and C scroll supports.  You can see that an S scroll is incorporated in the island as the support under the stone countertop. The detail in the scroll is far from simple.  Instead, lots of carving and detail is what speaks to this style.

The ceiling in this kitchen is what imbues this style.  Black metal rods are formed into pointed arches giving the ceiling character and depth.  During this era, metal was often used in furniture as it was less expensive.  Here, metal is used in the details.  Pointed arches were reminiscent of Gothic architecture that was a motif of this time and very popular in the Victorian period.   To further finish off this look, copper touches such as pots and pans were also incorporated. 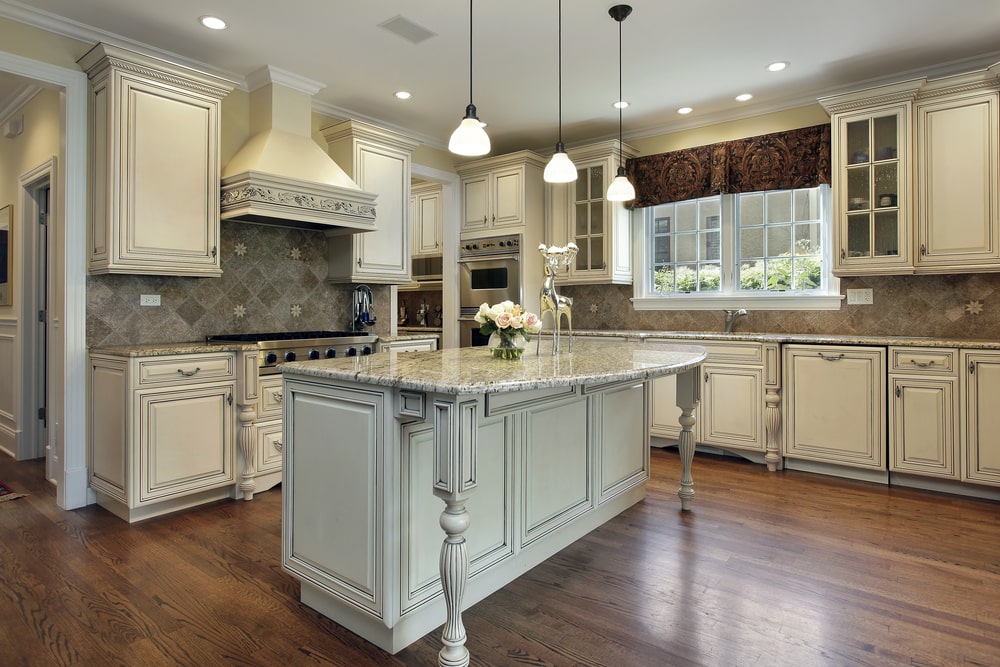 Part of achieving a Victorian look in your kitchen can be through using popular color choices. Think rich, dark jewel tones in muted ruby reds, forest greens, and deep blues. In this kitchen, the dark, muted, heavy fabric is used to create a valence over the window.  Darker colors were preferred as they could effectively hide ash from the coal fires that were burned indoors.

The mid-tone parquet wood flooring gives this kitchen interest and contrast against the very dark cabinetry. This style of wood flooring was popular because it showed more embellishment than traditional wood flooring.  Emphasis was always on more is better, so intricate patterns in the floor were preferred.  In addition, mid-tone colored wood was the favored color choice.

As previously mentioned, when we think of colors that represent this style, rich colors come to mind.  Muted green was a popular choice which is what we see reflected in the cabinetry.  This color choice breaks away from the popular trend towards more neutral colors.

When we look at this kitchen, what immediately stands out are the beautiful windows.  They are adorned with dark grills which are a nod to Victorian times.  These grills are an updated play on decorative ironwork windows that were popular in this bygone era. The grillwork gives the room a distinctive, dramatic flair and really stands out against the rest of the kitchen.

The thick, heavy crown molding in the coffered ceiling is the centerpiece in this space.  The grand scale and detail instinctually draw the eye upward.  The leaf pattern is reminiscent of this time period as well. So, if you love the detail of this ornamentation, then this is a great inclusion to give you a Victorian look.  We also see iron scrollwork and gilding in the pendant light and metal range hood cover.  These were all popular materials used during this time.

One thing that comes to mind when thinking of this period look, is lots of decorative items.  There is no exception in this kitchen and no space is overlooked.  Even the windows have been designed with shelving to hold decorative pieces.  Again, we see this in the rack hung above the cooktop holding various pots and pans. Further, the abundance of things is seen in the many items placed on the countertop and island.  If you love knick-knacks then this style gives you the space to shine.

The black grillwork in these upper cabinets gives the kitchen a gothic feel reminiscent of this time.  The pointed arches are very characteristic and are accentuated against the light countertops and backsplash.  You can also see the corbel with a leaf pattern in the range hood cover.  Asian influences are also present which is seen through the wallpaper backsplash.  Even the thick edge countertop is meant to replicate the look of a cornice on a piece of furniture.  Furthermore, the embellished ceiling with cornice detail is also an updated throwback to this time.

The eye-catching backsplash is the focal point in this kitchen.  Steeped in a quatrefoil motif, this pattern is again echoed in the cut-outs in the cabinet doors. Aside from this, we see many other Victorian elements in this kitchen.  There is the repeated pointed arch motif in the cabinetry doors and the muted green island.  The black lantern-style fixtures with candelabra lights are another aspect.  As we look more closely at the range hood cover we also notice the carved wood leaf pattern.  Lastly, there is also cornice detail above the stove, a coffered ceiling, and copper cookware accessories all of which are Victorian in nature.

With the introduction of the steam engine, greater trade between faraway lands was made possible.  As trade opened up, other cultural influences were introduced.  As a result, there became an interest in Asian-influenced design.  This kitchen incorporates a backsplash and range hood cover that speaks to this style.  The flowing lines give this kitchen an elegant softness.  There are other elements included in this kitchen, such as the woven area rug which would be representative of this time.  There are also many decorative details including the thick and ornate crown molding, carved wood detail, leaf pattern corbels, and ornamental pilasters as part of the range hood cover to name a few.

This kitchen incorporates chintz for the window treatments in a swag style roman. Chintz is a type of fabric with printed designs featuring either flowers or other patterns in different colors on a light background.  This was a popular material choice during this time. In addition, this more formal style of window treatment replicates a luxurious look that was often sought after during this era.

We see traces of the Victorian time period through the flooring that is used.   A medium tone and dark tonewood are set against each other to create some drama.  The darker wood color is used around the perimeter of the room to create a border.  Again, this type of flooring would have been preferred as it veered away from the unadorned.

The cabinetry in this kitchen is nostalgic for this period.  Ornate pilasters are included in the pull-out cabinet we see in the forefront and again behind the pull-out on the facing of the cabinets.  We also see the ornate pilaster design repeated in the upper cabinetry. The detail is meant to achieve a feeling of luxury and abundance.

The arched entryway into this kitchen is a nod to the gothic influence of this time.  When we think of arched entryways we can think of entrances into beautiful, grand churches.  The arched entry gives the feeling of grandeur and splendor.  We see further detail of this era in the intricate ceiling design.

Another name for the vaulted ceiling is also known as a cathedral ceiling.  This, as the name implies, was a key feature in cathedrals including the Victorian era.  This architectural design element is played out in this kitchen, reminding us of beautiful cathedrals of times past.  The vaulted ceiling that we see portrays expansiveness and opulence.

The corbels used in this example below the countertop and under the range hood cover showcase vine patterns reflective of this time.  It is even through small details such as this that help gives a kitchen a Victorian flare.

Embellishments were very popular on walls in this era.  A popular choice was using wallpaper to create some warmth and character.  A blue and white print wallpaper captures the look nicely giving this space some uniqueness.

This ceiling is often the last thought of when designing a space.  However, in this kitchen, this was not the case.   The elaborate tin ceiling was clearly front and center when pulling everything together.  When you want your focal area to be unique, this is a great design element to incorporate.

When looking at this space, there are many elements of Victorian design.  That being said, one that is incorporated here but is often overlooked, is the cabinet hardware.  The pulls and knobs used are in a gothic style.  This look mimics wrought-iron touches that conjure up images of beautiful medieval castles.  We also see this period-style through the ornate crown molding, leaf pattern wallpaper, tin ceiling, and stained glass cabinet doors that are incorporated throughout.

A simple way to create this period look is through the cabinet fronts you incorporate in your kitchen.  Again, we see the pointed arch motif carved into the front of the cabinet doors.  This is a more restrained way to incorporate a popular detail of this time.

As previously mentioned, less is not more in the Victorian period.  More is best. The opulently detailed range hood cover shows this well.  We see this through the gilding and the vine patterns repeated throughout.  There are many other elements of the Victorian period that are showcased as well.  However, one that stands out is the stained glass cabinet doors used in this kitchen.

Damask fabric was often used for creating beautiful window treatments at this time.  Loved for its pattern, it was often used liberally.  A more modern twist to updating this look is through integrating it into other areas, such as dining chairs as we see in this photo.  The sky is the limit, use your creativity to include this type of material.  Perhaps it's built-in seating or maybe you follow tradition and integrate it in flowing draperies.

This room defines embellishments.  Every corner of this kitchen is full of detail. We see the leaf pattern corbels under the countertops which are then repeated in the range hood cover.  Intricate scrollwork is also seen in the range hood cover which creates a feeling of opulence. The thick crown molding speaks of grandeur and there is further detail in the pathway through to an adjacent room.  No detail is left out in this room, it truly emulates aristocracy.