Vaulted ceilings are highly sought after in the real estate world!

Whether you’re an existing homeowner or in the market for a new living space, there’s a good chance a room with a vaulted ceiling is at the top of your wishlist. But there’s not just one style of vaulted ceiling to choose from.

Here are the most common types of vaulted ceilings seen in homes and other structures around the world:

16 Types of Vaulted Ceilings for a Unique Home Makeover 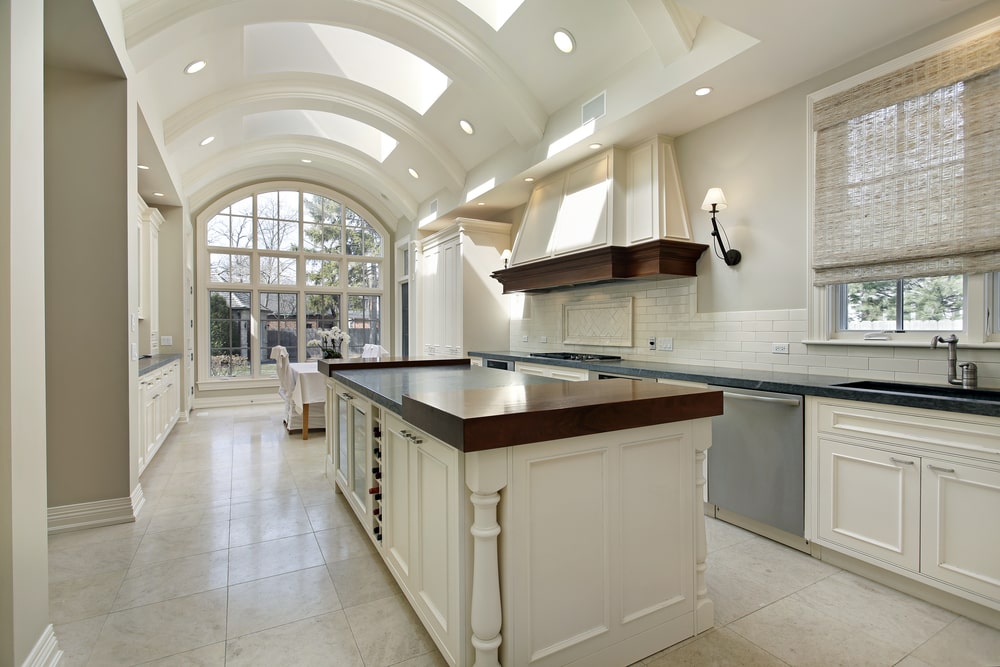 Barrel ceilings feature a single, continuous arch from one end of the room to the other.

While not uber-popular in contemporary homes, barrel ceilings were the original style of vaulted ceilings. Even today, some architectural purists consider this to be the only “true” vaulted ceiling in existence!

This shape is most dramatic in hallways and elongated spaces. But you can technically utilize a barrel ceiling in any type of room. 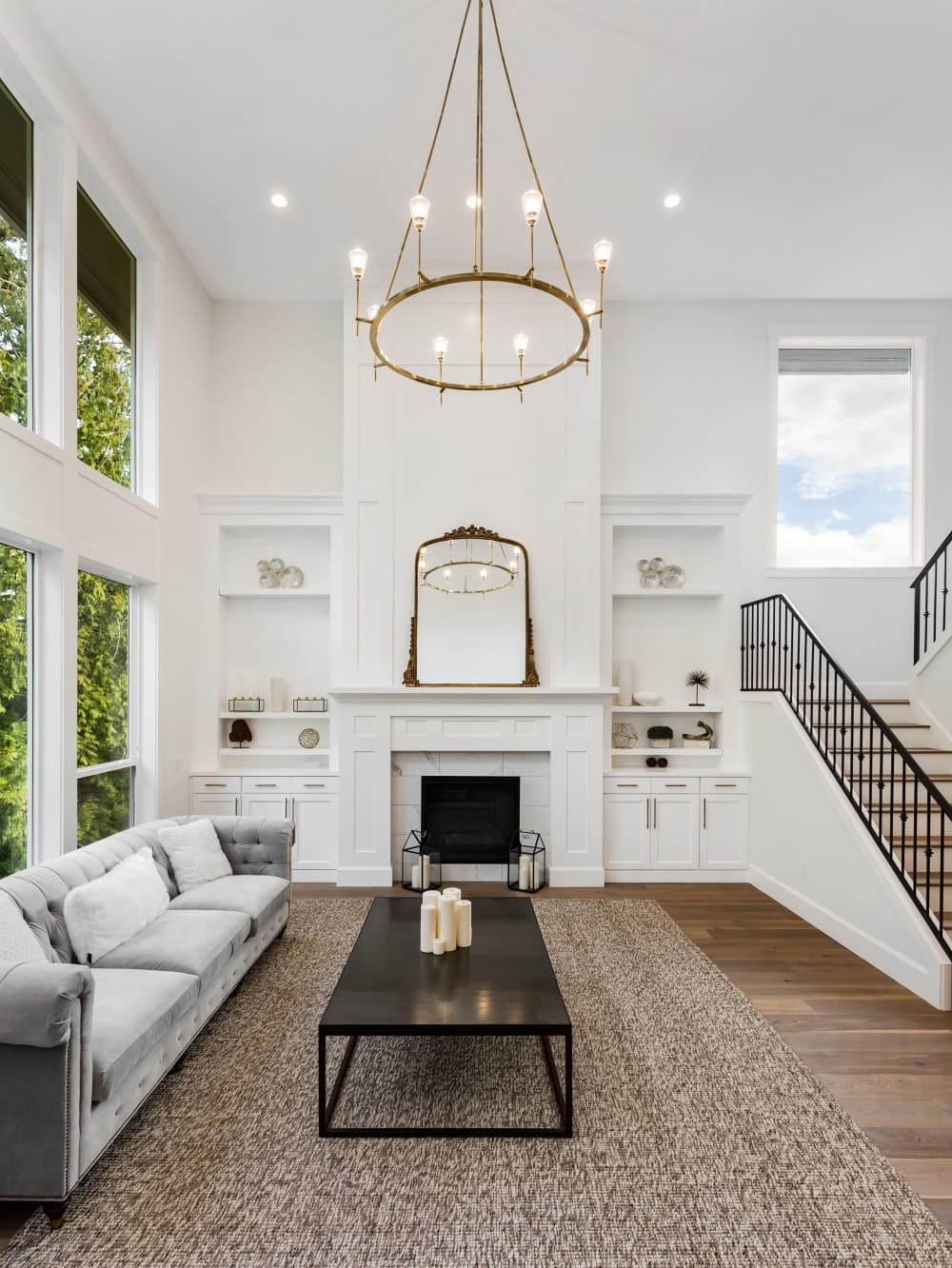 A flat vaulted-style ceiling offers the best of both worlds for homeowners looking to increase space while preserving a traditional room shape.

In the world of everyday home design, the term “vaulted ceiling” is used to describe any ceiling that is taller than average. Technically speaking, though, a flat ceiling cannot be vaulted.

Instead, most architects would call this style simply a “tall” or “high” ceiling. Whether or not this type of ceiling is truly vaulted may be up for debate.

But that doesn’t change the fact that it could be an excellent choice for many homes! 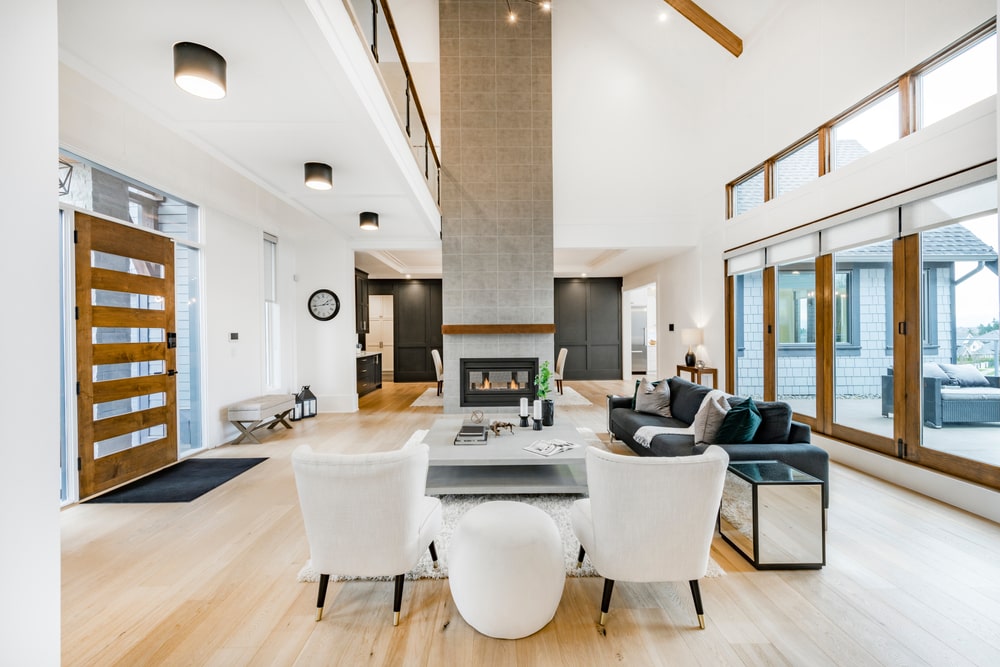 If you ever hear of a half vaulted ceiling, there’s a good chance the speaker is actually referencing two adjoining ceiling styles in a single space.

This concept is most often utilized in open-concept homes (where there are no walls to cover up the transition between ceiling heights). Typically, the lower section of the ceiling sits underneath a second-story room or hallway.

A half vaulted ceiling can be combined with other unique architectural elements, such as a loft or staircase. 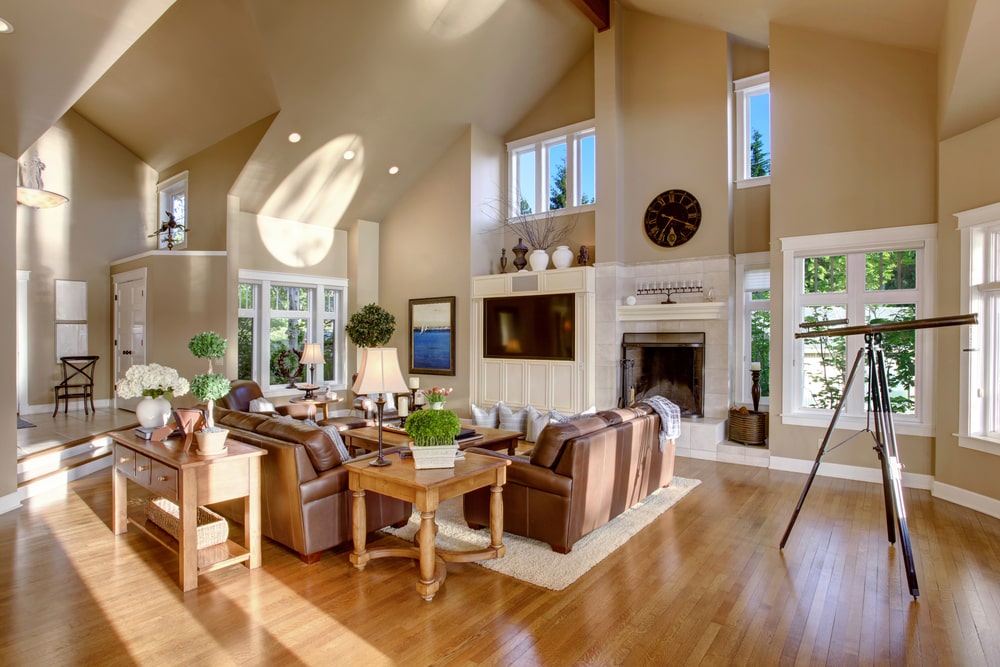 While a vaulted ceiling does not have to follow the exterior roof line, it cannot surpass it. In some homes, maximizing overhead space results in an asymmetrically vaulted ceiling.

Of course, some asymmetrical ceilings are the result of creative architecture. But the scenario mentioned above is by far the most common reason this style exists. 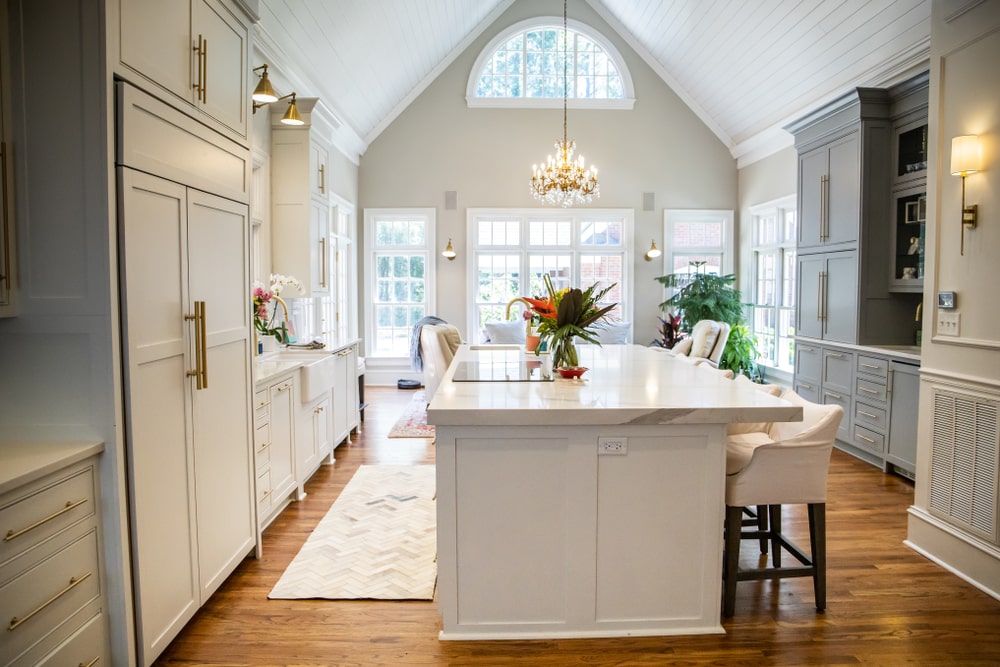 Depending on who you ask, a cathedral ceiling may be classified as a style all its own. But most homeowners and designers agree that cathedral ceilings can be grouped together with vaulted ceilings.

Cathedral ceilings are defined by two symmetrical sloping surfaces meeting at a central apex. Unsurprisingly, this type of ceiling closely resembles the interior structure of a classical cathedral.

A cathedral ceiling may or may not follow the slope of the exterior roofline. 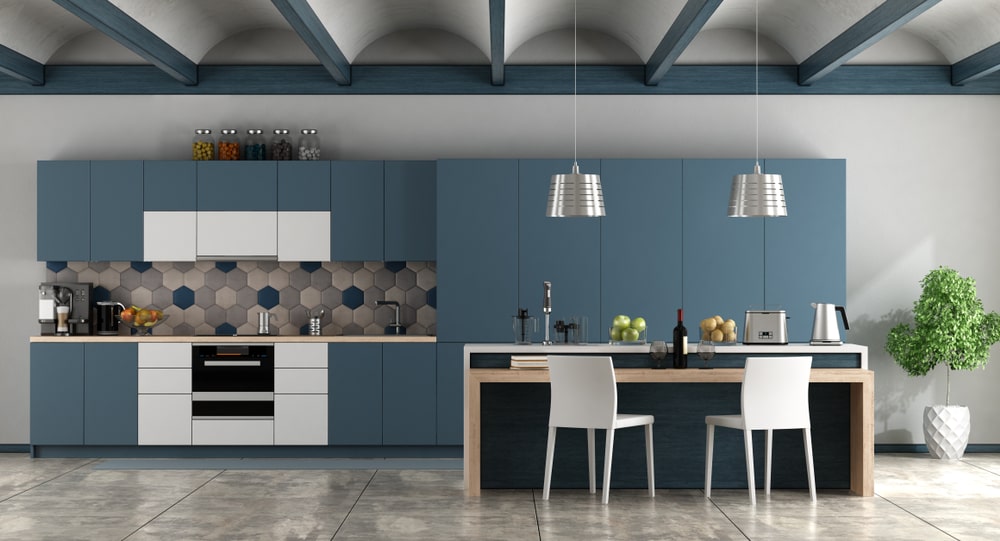 Those looking for an alternative to a traditional barrel ceiling might be fond of this arched vaulted ceiling. It essentially consists of several small barrel vaults constructed side by side.

This decorative ceiling design isn’t found in many homes. Homes that do utilize arched vaulted ceilings, however, are often at the forefront of innovative architecture and interior design! 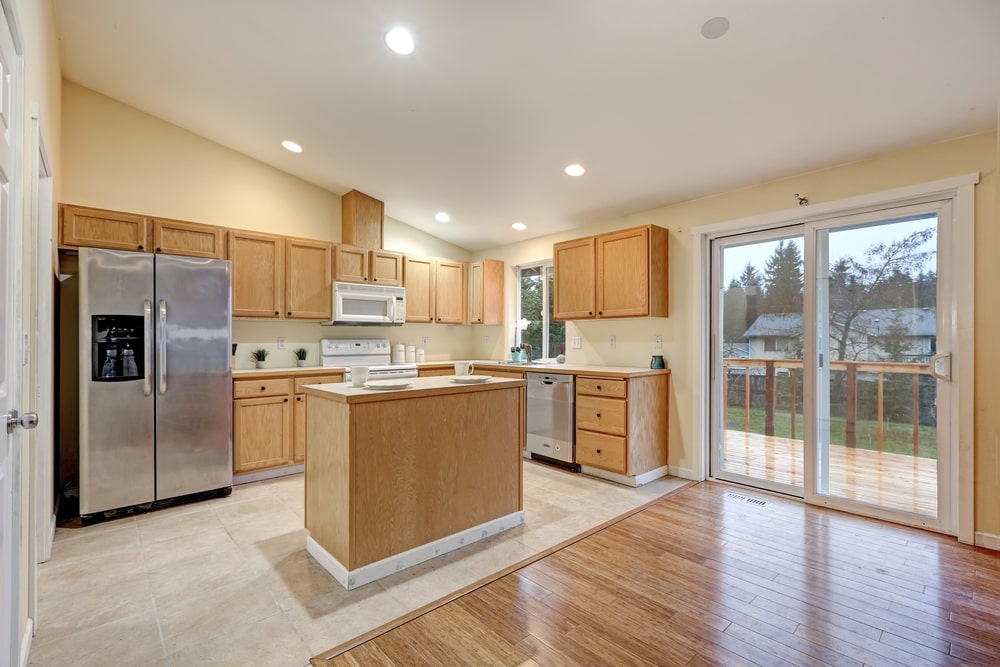 The defining characteristic of a shed ceiling is that only one end is vaulted. Shed ceilings go by many names, including the more descriptive “slanted ceiling.”

Shed ceilings are most commonly used when the existing roof doesn’t allow for a fully vaulted ceiling. They offer many of the same benefits as a traditional vaulted ceiling despite any structural limitations.

Attics, sunrooms, and other room additions are the most likely to feature this style of ceiling. 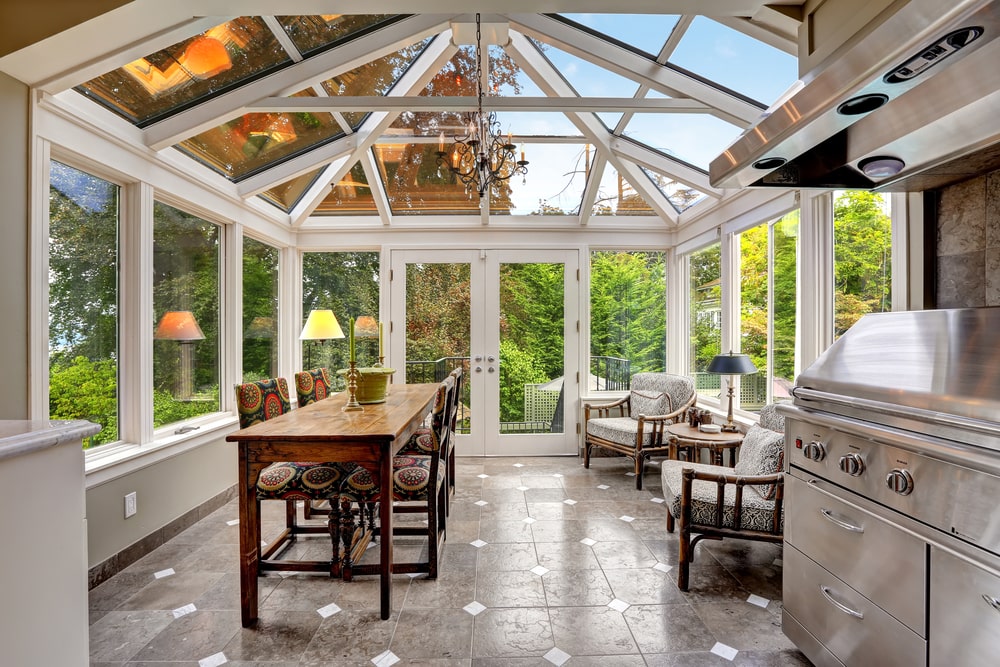 The vast majority of glass ceilings are vaulted. This type of ceiling can be found in sunrooms, covered porches, greenhouses, and even some gazebos. While constructing a flat glass ceiling is possible, it’s not very practical!

After all, a glass ceiling also doubles as a roof (which must be sloped to prevent rain and snow buildup). Plus, vaulted glass ceilings maximize natural light and are very aesthetically pleasing. 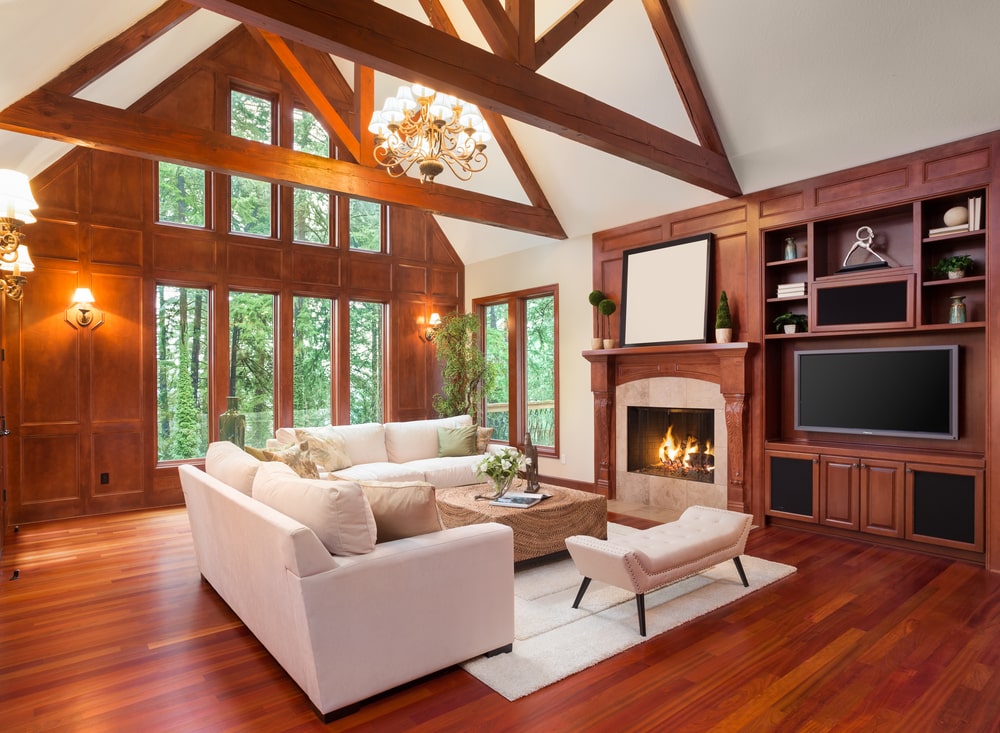 Creating open space is one of the biggest benefits of a vaulted ceiling. But letting that additional space sit empty isn’t always the best strategy. Architectural elements like exposed rafters can add contrast and intrigue to a plain vaulted ceiling.

Rafters can be structural or purely decorative. Not all vaulted ceilings can be paired with exposed rafters. Cathedral-style ceilings are the best choice for those interested in bringing this trend to life. 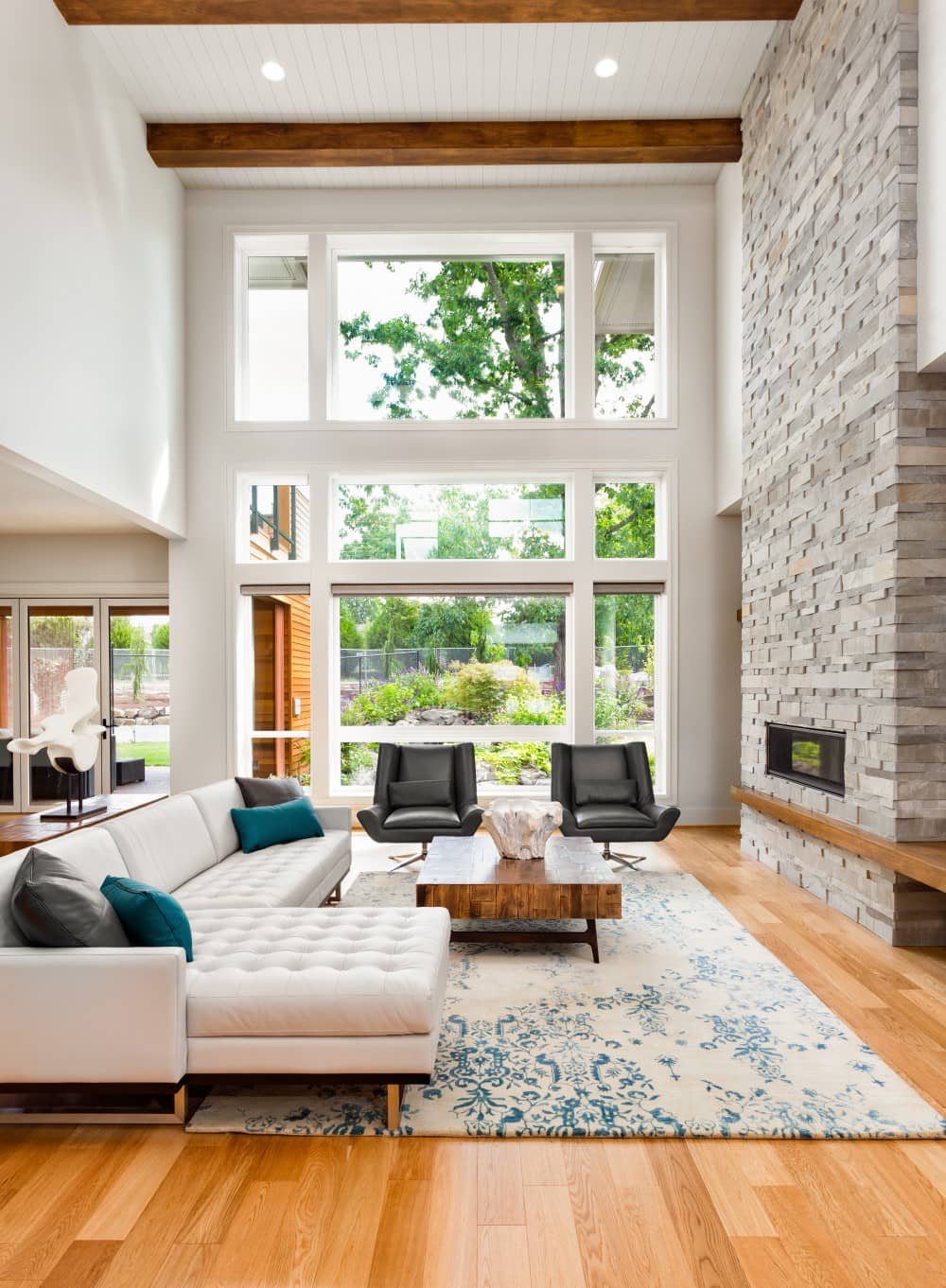 While exposed rafters are only possible for a select number of vaulted ceilings, exposed beams are much more versatile. Like rafters, exposed ceiling beams can be structural or decorative.

They can be added to any flat or angled vaulted ceiling. Adding decorative beams to a ceiling can be a great way to update the room’s aesthetic or cover surface imperfections.

Structural beams should be handled by a professional. Meanwhile, ornamental beams made of wood veneer, plaster, or another lightweight material can be installed as a DIY project. 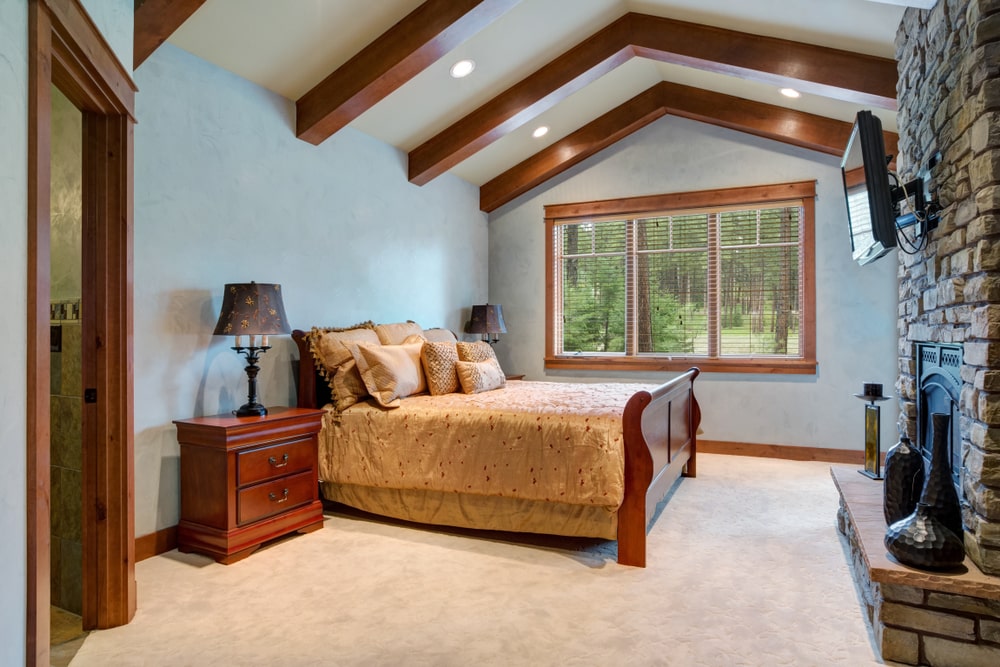 Few homeowners would say no to a bigger and brighter master bedroom. A vaulted bedroom ceiling is one of the best ways to add space without expanding the room’s footprint.

The height of a vaulted ceiling tends to be relative to the size of the room below. So vaulted bedroom ceilings are rarely as tall as those found in living rooms and other central areas.

However, adding even one or two feet to a bedroom ceiling’s height can make a huge difference to the atmosphere as a whole. 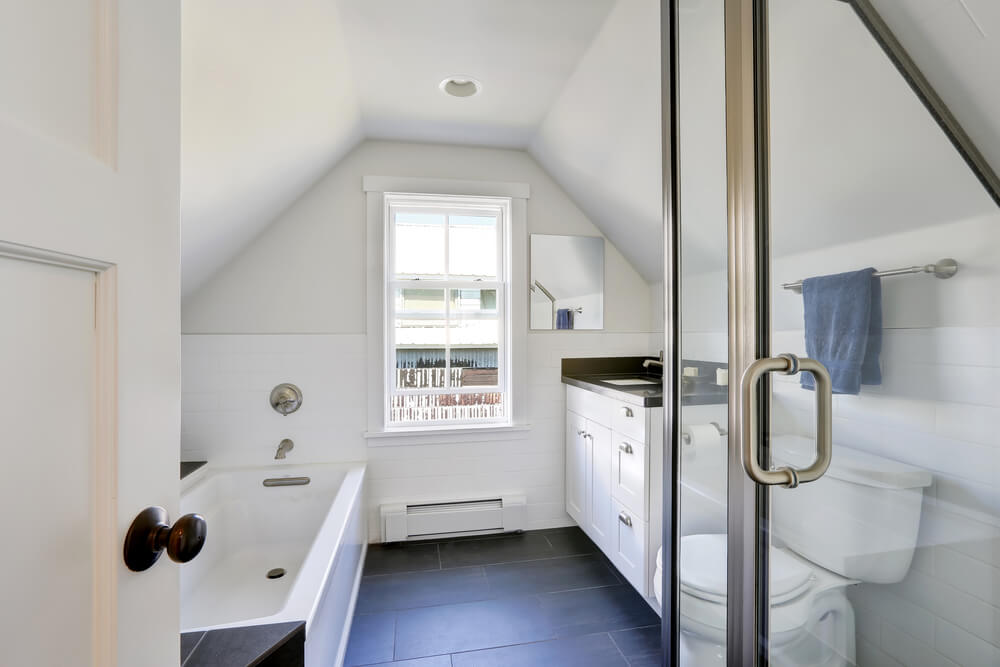 Speaking of spaces where vaulted ceilings are underutilized, have you ever stood in a vaulted bathroom?

But that extra headroom has a big impact on such a small room. This style of ceiling is especially effective in bathrooms located in attics and other compact spaces. 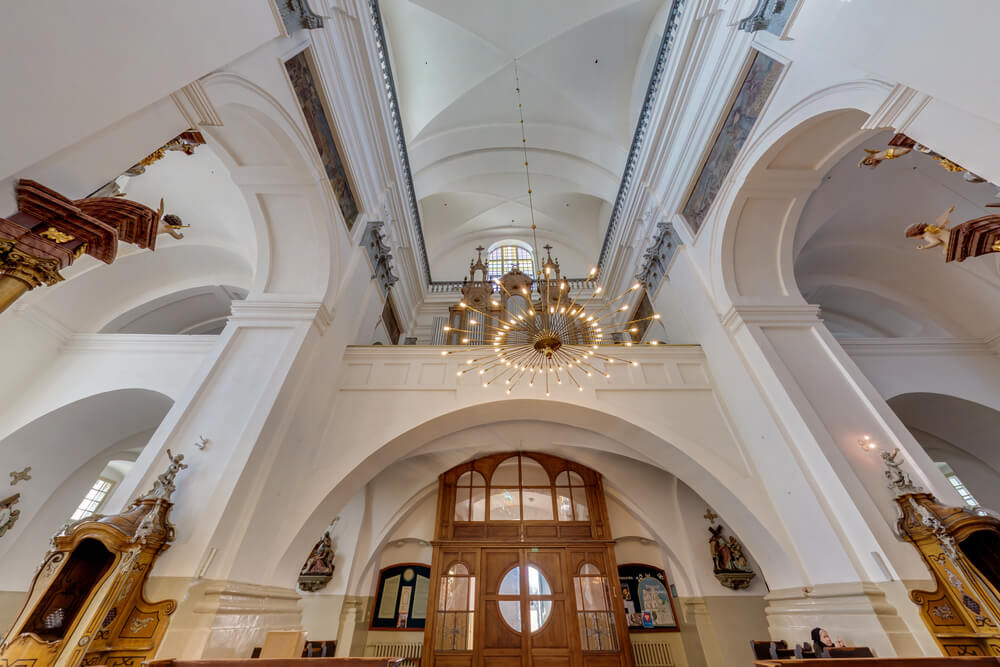 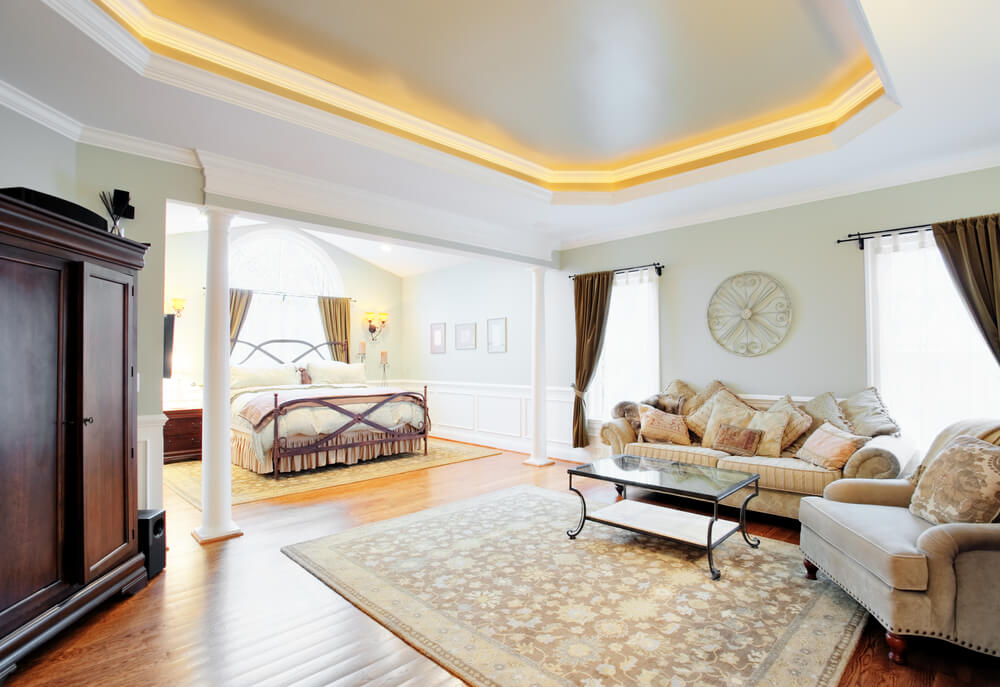 Tray ceilings are flat ceilings with a recessed “tray” in the center of the room. The tray can be anywhere from a few inches to several feet higher than the surrounding ceiling.

Tray ceilings come in a variety of heights and styles — not all of which are vaulted. But vaulted and tray ceilings overlap often enough that it would be remiss to exclude the latter from this list!

Not only do tray ceilings add overhead space to a room. They can also be paired with integrated lighting and other design elements to give the room a one-of-a-kind aesthetic. 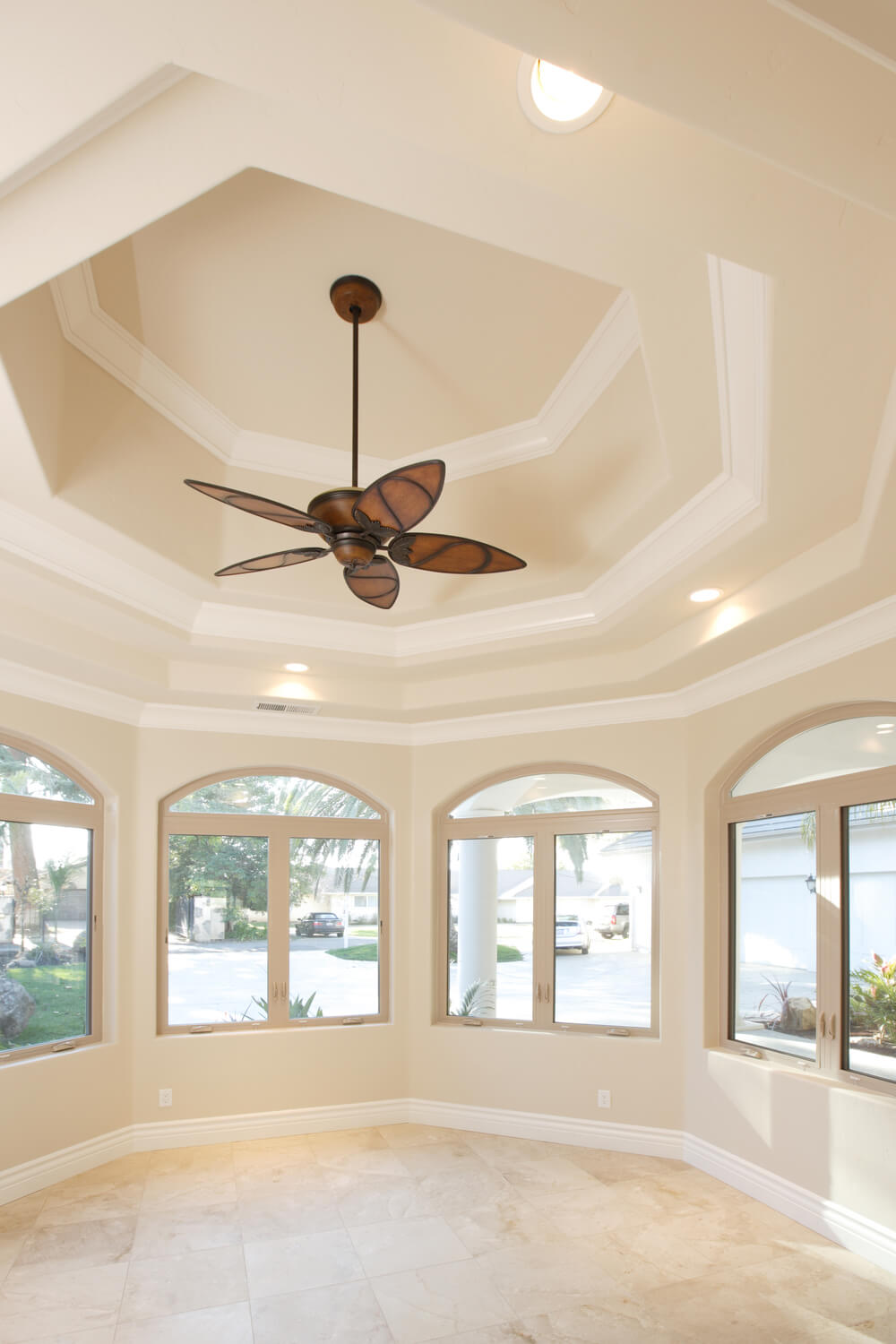 Stepped ceilings are closely related to — and sometimes considered a subtype of — tray ceilings. This style of ceiling features not one but several recessed trays that get higher and higher with each subsequent layer.

A stepped ceiling could encompass the entire room. Or this vaulted element could be a small section of the ceiling used as an architectural accent.

Some designers prefer the look of a stepped ceiling over a more traditional vaulted ceiling. However, in some cases, constructing a stepped ceiling can be a way to maximize headroom in a home with an awkward roofline or attic space. 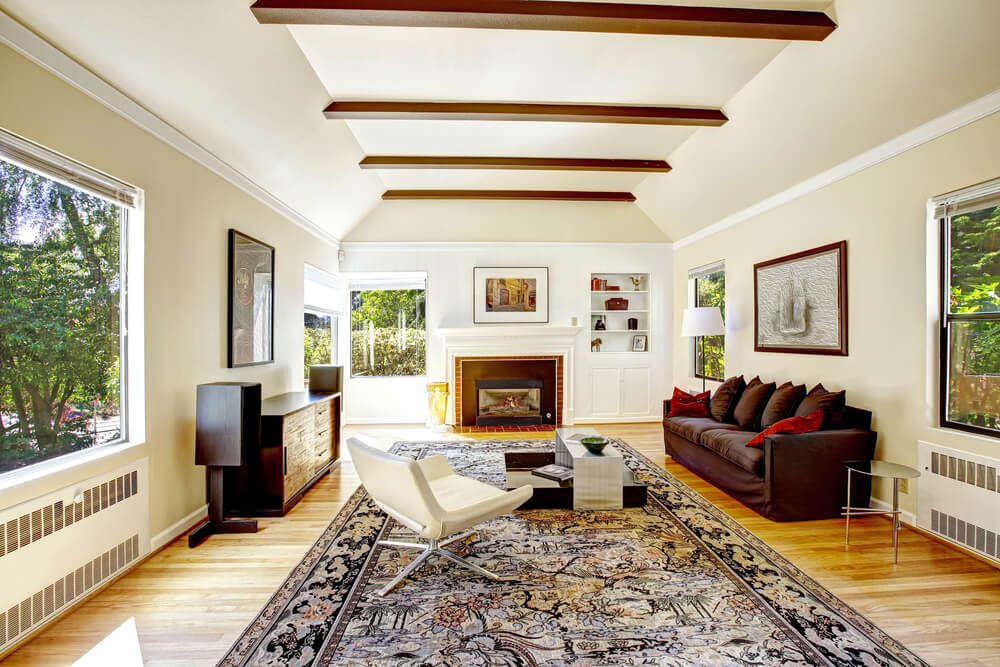 A coved ceiling features smooth, often curved transitions between the ceiling and the adjacent walls.

This is yet another style of ceiling that is not always vaulted. But vaulted ceilings offer more space to implement these transitions within a room.

Cove ceilings can also be used to cover structural elements like rafter beams, HVAC ductwork, and more. Opting for a coved design could let you enjoy the benefits of a vaulted ceiling without needing to expose the structures typically hidden inside!