Many homeowners dream of a walk-in shower or jacuzzi tub. But how much thought have you given to finding the perfect toilet for your bathroom remodels?

The type of toilet you choose for your home can affect the amount of water consumed with each flush and, by extension, your monthly utility bill. It can also play a role in your bathroom layout and overall aesthetic.

If you’re like the average person, identifying one toilet from another can seem like an impossible task. Here are 20 different types of toilets you should have in mind when shopping for your newest bathroom design.

The Different Types of Toilets

One-piece toilets feature a tank and bowl made from a single piece of porcelain (or similar material). Aside from this defining characteristic, one-piece toilets come in all different shapes and sizes.

A one-piece toilet offers a sleek modern look that is easier to clean than a two-piece toilet. There are far fewer nooks and crannies for dirt and bacteria to collect on this style of toilet.

The only real downside to a one-piece toilet is the need to replace the entire unit if something goes wrong. There’s no way to repair just the tank or bowl if one is damaged. 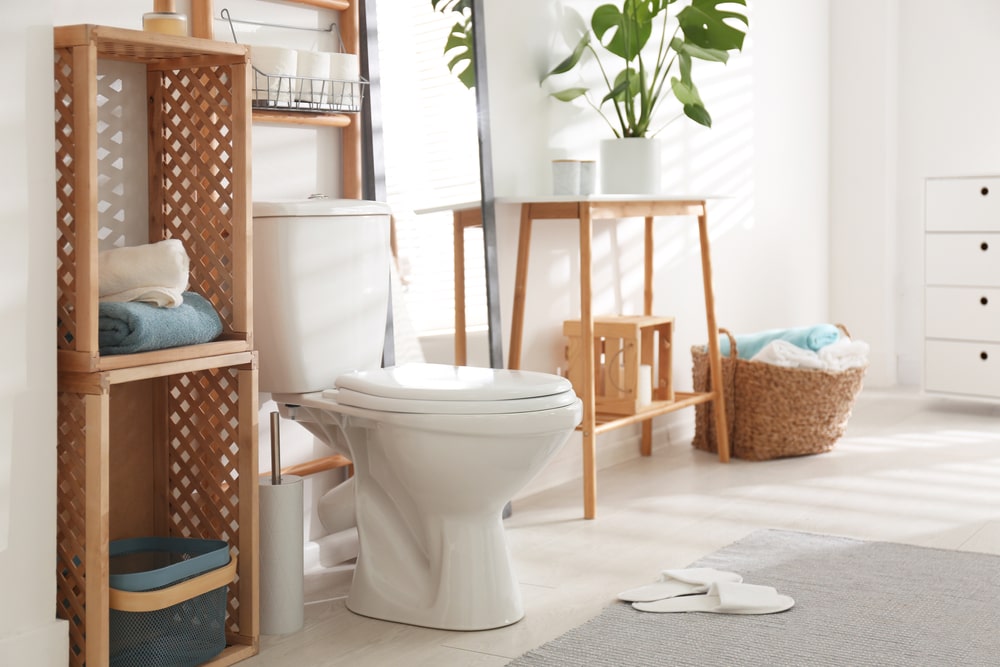 Many residential toilets bear a two-piece design. This is largely because of the affordability of two-piece toilets compared to one-piece models.

A two-piece toilet features a tank that is completely separate from its bowl. The joint between the tank and bowl can be a common place for leaks, mold, and build-up to occur.

While a two-piece toilet can be harder to clean than its one-piece counterpart, there are benefits to using this style in your own bathroom. First, it’s easier to install. And, second, it’s simpler and cheaper to fix. 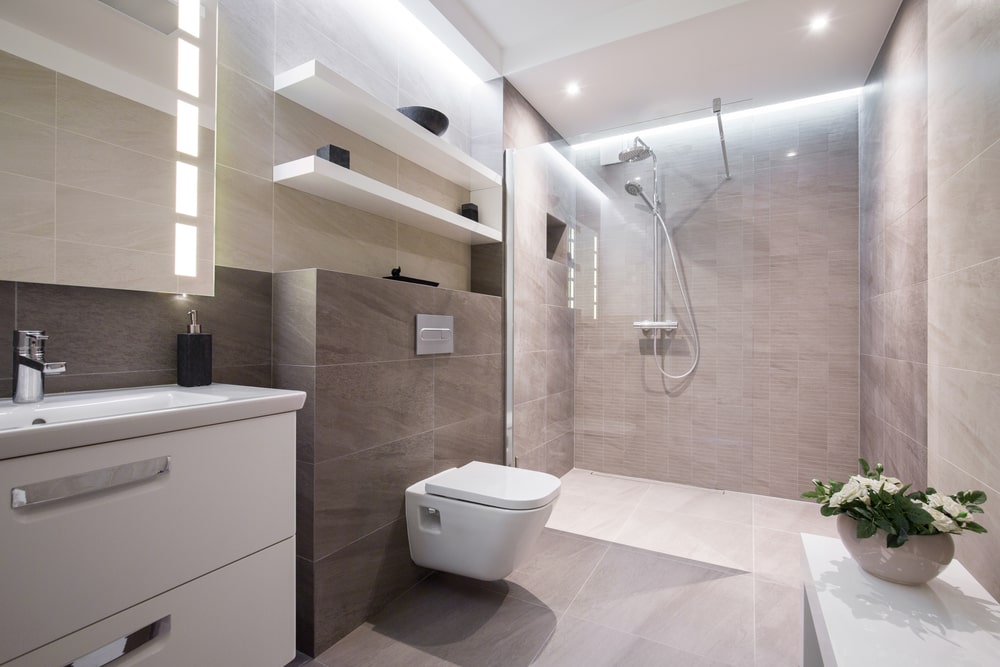 Traditional toilets rely on tanks to store water for flushing. Tankless toilets draw in water so quickly that a reserve tank isn’t necessary.

Tankless toilets are space-efficient and visually pleasing. Because of their compact design, most tankless toilets feature motion-activated or wall-mounted flushers.

Unfortunately, many residential buildings don’t have the right plumbing for this type of toilet. Tankless toilets are more common in commercial buildings equipped with high-volume pipes. 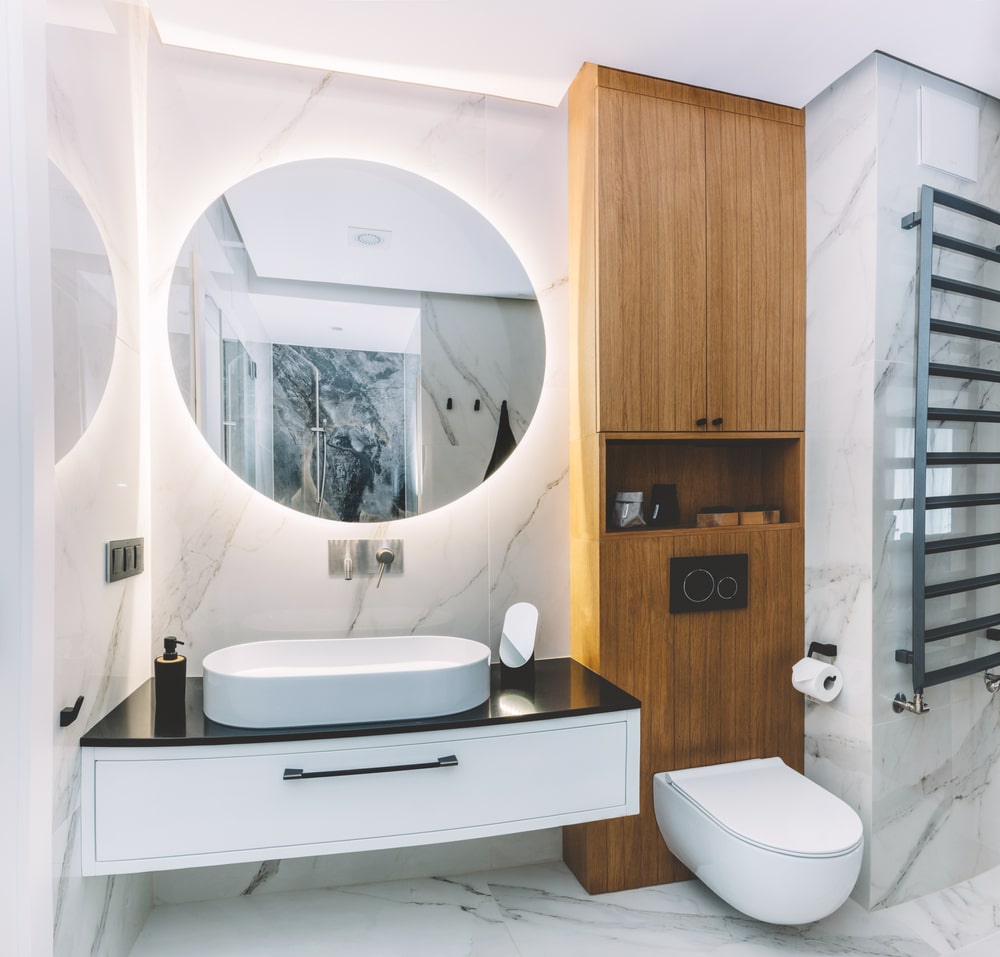 Wall-mounted toilets are yet another style more often seen in commercial spaces than private homes. But there are plenty of reasons to install this type of toilet in a residential bathroom.

The biggest benefit of a wall-mounted toilet is the amount of floor space saved. These toilets are a popular choice for ultra-small powder rooms that don’t have enough clearance for a more traditional toilet design.

If you feel that a wall-mounted toilet is right for your bathroom, keep in mind that installation won’t be cheap. Prepping a wall for one of these toilets is no easy feat. Your home’s existing plumbing may need to be rerouted, as well. 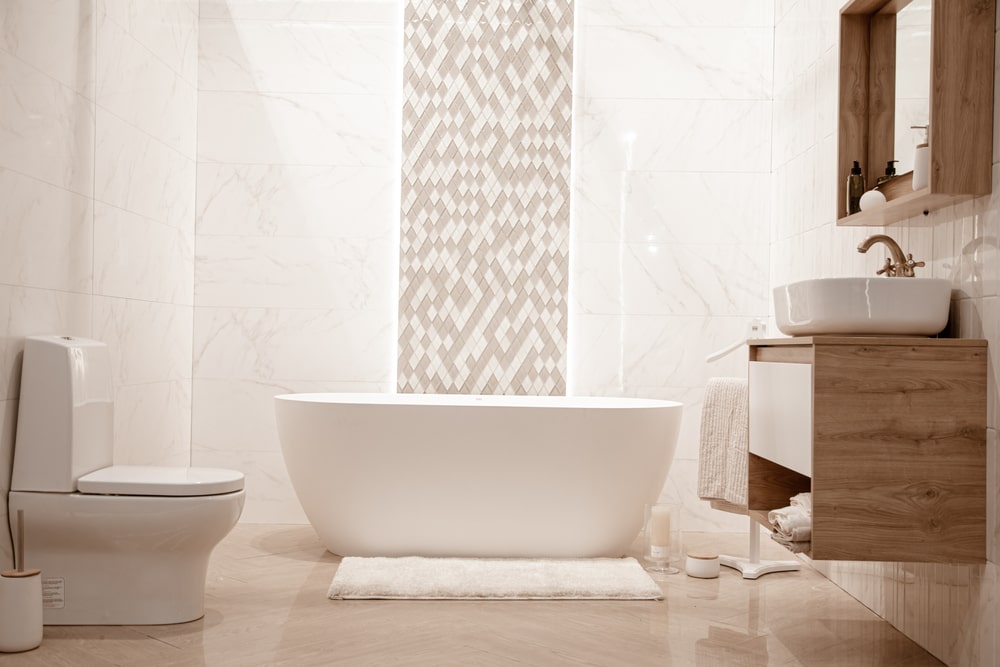 You don’t need to mount your toilet to a wall to conserve floor space. Compact toilets come in a wide range of designs, many of which are just as easy to install and affordable as full-scale ones.

Compact toilets can be tanked or tankless. They can also be made of one solid piece of porcelain or two. The only defining trait of a compact toilet is its small footprint. 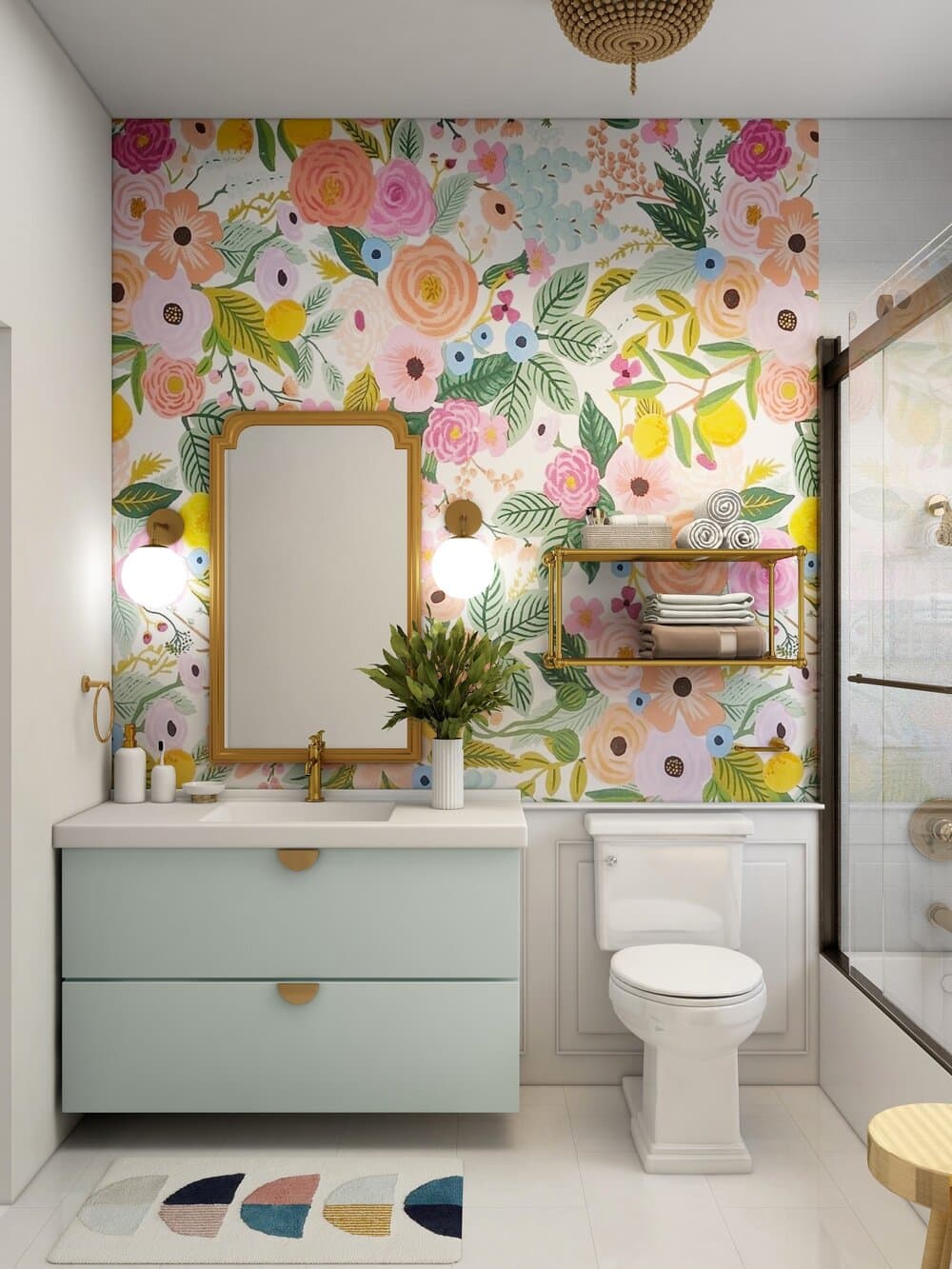 Your toilet is of little use if it doesn’t flush! Most of us are familiar with handled toilets, which rely on a small lever mounted on the tank to flush the bowl with clean water.

Toilet handles can be mounted in several ways. Front- and side-mounted handles are the most popular options. But some toilet tanks (typically those with a rounded front) feature angle-mounted handles instead.

Handled toilets are straightforward and easy to use. They also offer the freedom to swap out the existing handle for one that better suits your bathroom decor at any time. 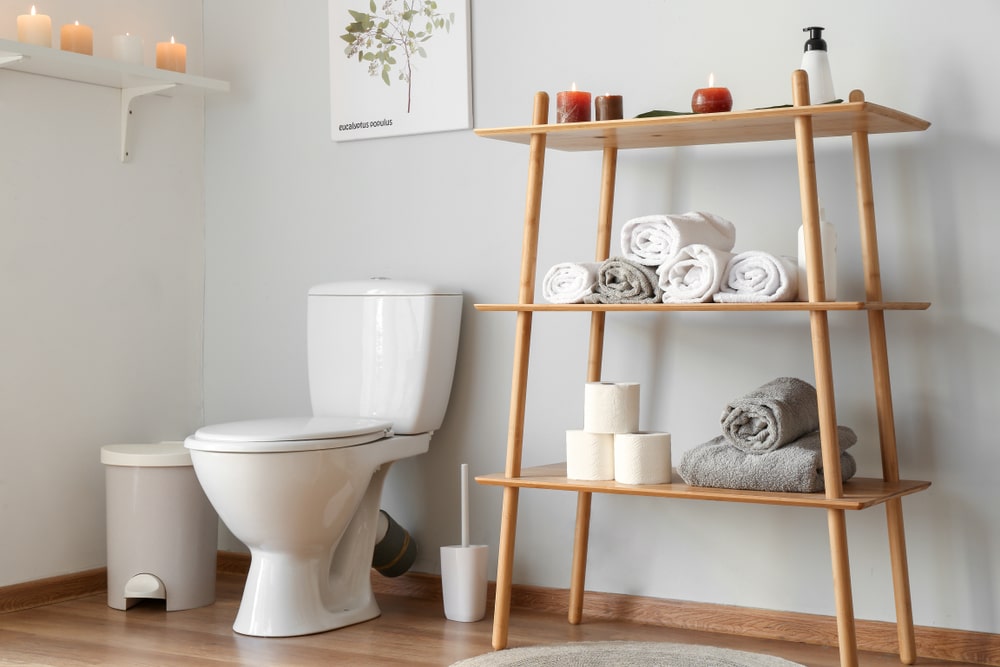 Handled toilets aren’t going anywhere. But they’re not the only option for homeowners looking to update their bathroom fixtures.

Button-flush toilets typically feature a button on the top of the tank. This button works just like a handle — just push it down to flush the toilet. 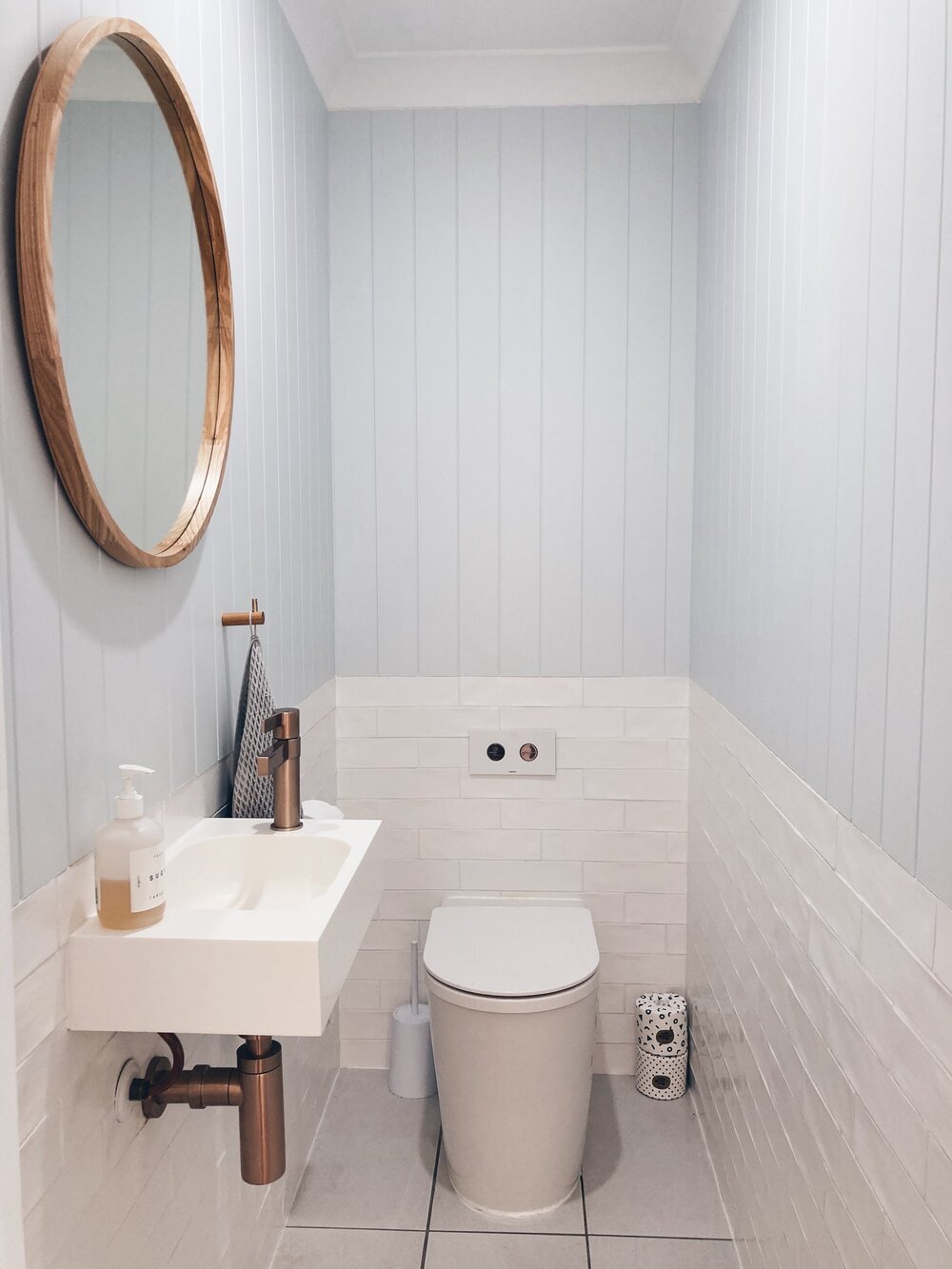 Dual flush toilets are one of many recent inventions aimed at reducing household water waste. The nitty-gritty of this type of toilet is that they allow users to select between a water-efficient flush for liquid waste or a high-powered flush for solid waste.

Dual flush toilets are an excellent option for any homeowner interested in sustainability. This style of toilet can even save you money by reducing the amount of water used by your family each day. 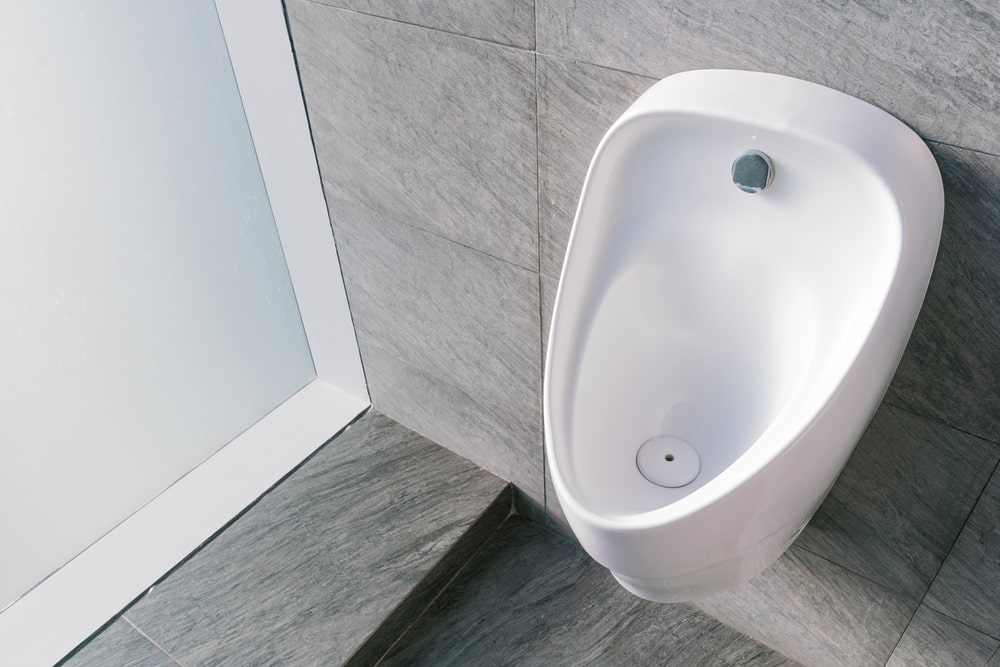 Whether or not a urinal is really a type of toilet might be up for debate. But there’s no denying the importance of this fixture in the context of bathroom design as a whole.

You might associate urinals solely with public restrooms. And it’s true that very few residential bathrooms feature standalone urinals. However, there are scenarios where installing a urinal in your home is a worthwhile investment.

Urinals are a space-efficient option for bathrooms that experience heavy traffic. For large families, a separate urinal could be the secret to shared bathroom harmony. Or install a urinal adjacent to your garage or mudroom for a quick pitstop that saves time and space. 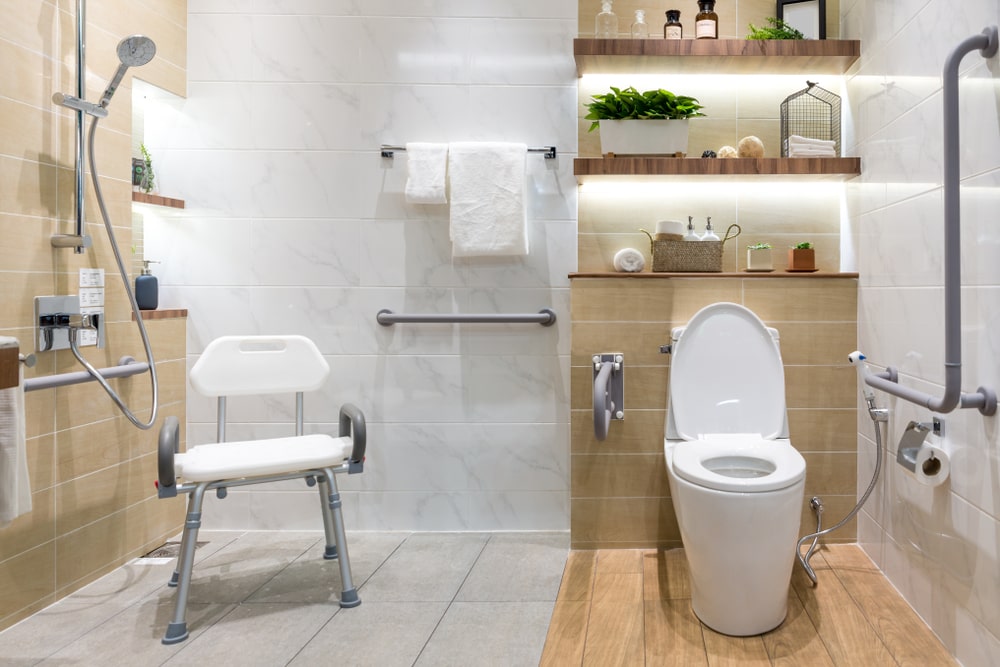 Whether the result of age or life’s dealt hand, it’s important to remember that accessibility looks different for everyone. And there are few living spaces where accessibility matters more than in the bathroom.

Accessible toilets are not one-size-fits-all. For some, an accessible toilet could be one that is shorter or taller than the average model. For others, accessibility could mean handles mounted to the toilet itself or the surrounding area.

Toilet design is just one part of creating an accessible bathroom. But these adaptations don’t need to mean giving up a visually appealing bathroom overall. 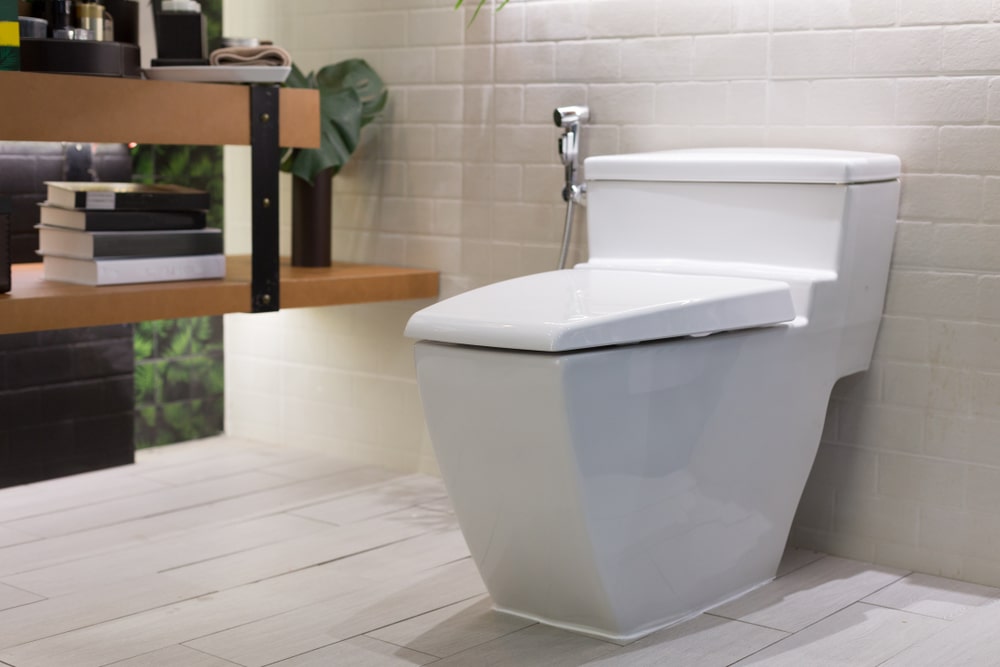 Despite popularity abroad, bidets have only recently gained a footing in the United States. Whether you’ve used a bidet for years or are just learning about this handy device, incorporating one into your home bathroom is probably high on your priority list.

Some toilets come pre-equipped with bidet sprayers. More commonly, a bidet is an aftermarket purchase installed onto an existing toilet.

Handheld bidet sprayers are easy to use and don’t take up much room (if any) in the bathroom. They are the perfect add-on accessory to any toilet without an integrated bidet system. 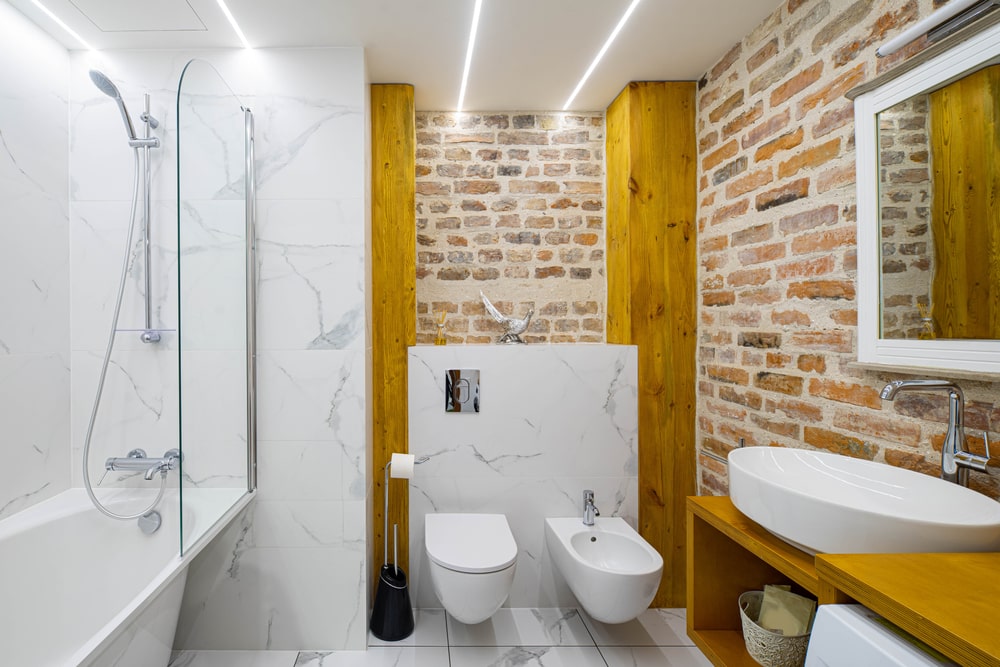 Standalone bidets were originally the only option on the market. These fixtures are popular across Europe, Asia, and other parts of the globe but are becoming less and less common with the introduction of handheld and built-in bidets.

While we’ve included the standalone bidet in this list, it’s crucial to note that these are not toilets! This style of bidet is used only after the standard toilet — it is not an all-in-one device.

There’s little reason to install one of these bidets in your own bathroom if it’s not already equipped with one. Standalone bidets take up just as much space as an actual toilet and are relatively expensive. 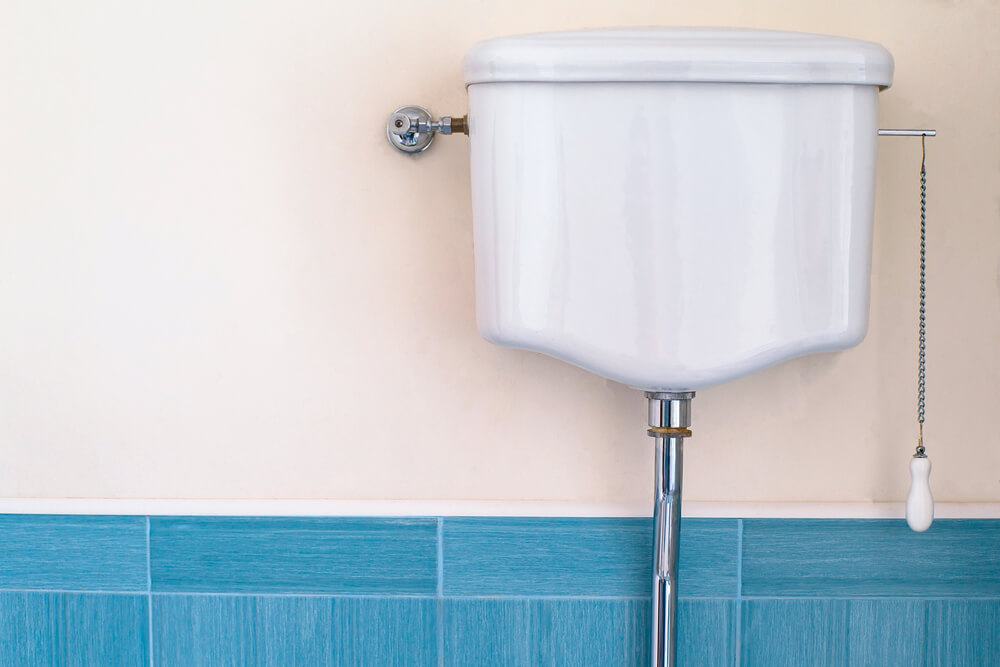 Today’s plumbing can handle waste without the use of gravity. But flushable toilets once relied exclusively on tanks mounted high above the bowl to create adequate water pressure.

Toilets with this type of setup are called high- or low-level toilets. The distance between the toilet bowl and the tank determines whether a particular unit is considered high-level or low-level.

You rarely see this type of toilet in contemporary homes. However, high- and low-level toilets are still sometimes used in historic buildings or by those who enjoy the Victorian aesthetic. 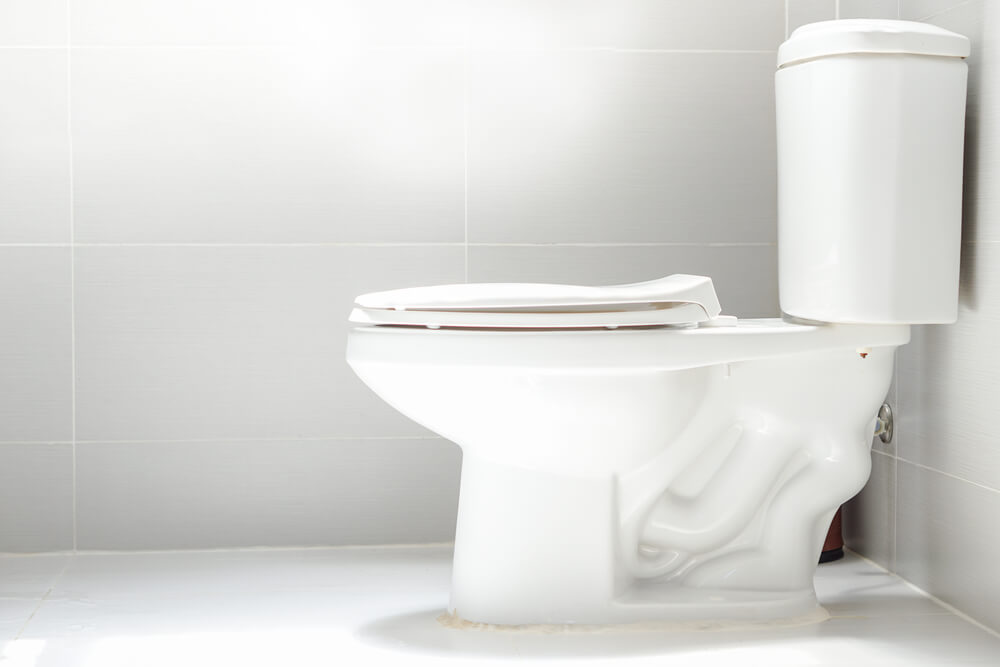 Tramways are the S-shaped pipes attached to the bottom of most toilets. Depending on the specific style of toilet, the tramway may not be visible from the outside.

When it comes to exposed trapway toilets, the shape of the pipe is clearly visible in the exterior porcelain. The pipe may even be completely exposed but this is much less common.

Whether or not you can see the tramway has zero impact on the toilet’s function or efficiency. It only affects the appearance and how easy the toilet is to clean. 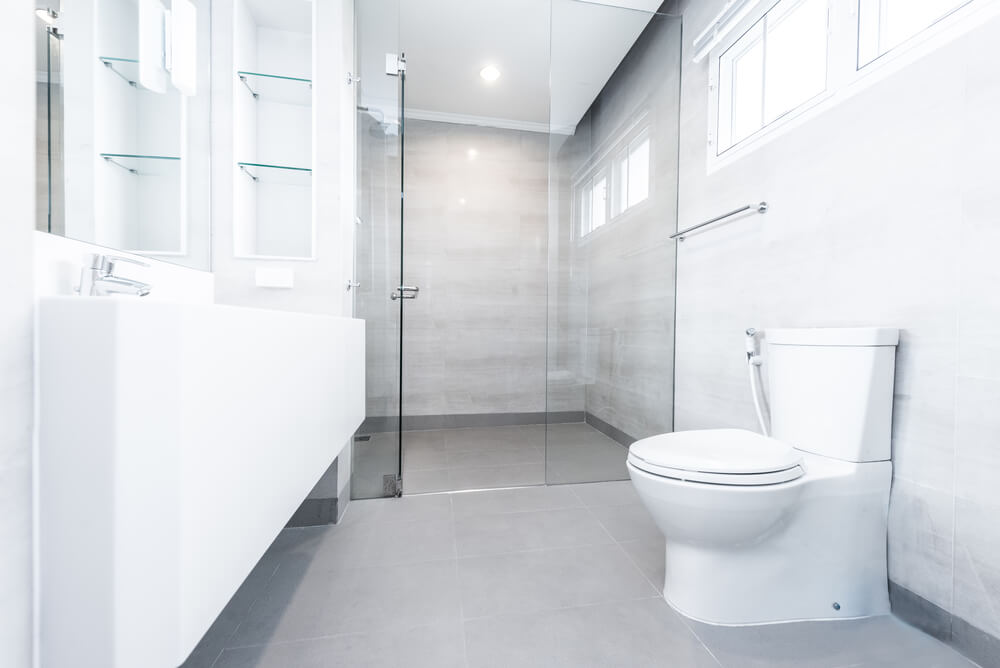 A skirted trapway toilet is the complete opposite of one with an exposed trapway. This style of toilet features a smooth, uniform base that covers the tramway and any other pipes in full.

Skirted trap ways are extremely popular in modern toilet design. On the other hand, some homeowners feel like they have a bulky shape and take up too much floor space.

Again, a skirted trapway has no effect on how the toilet actually works. It can, however, make it easier to clean. 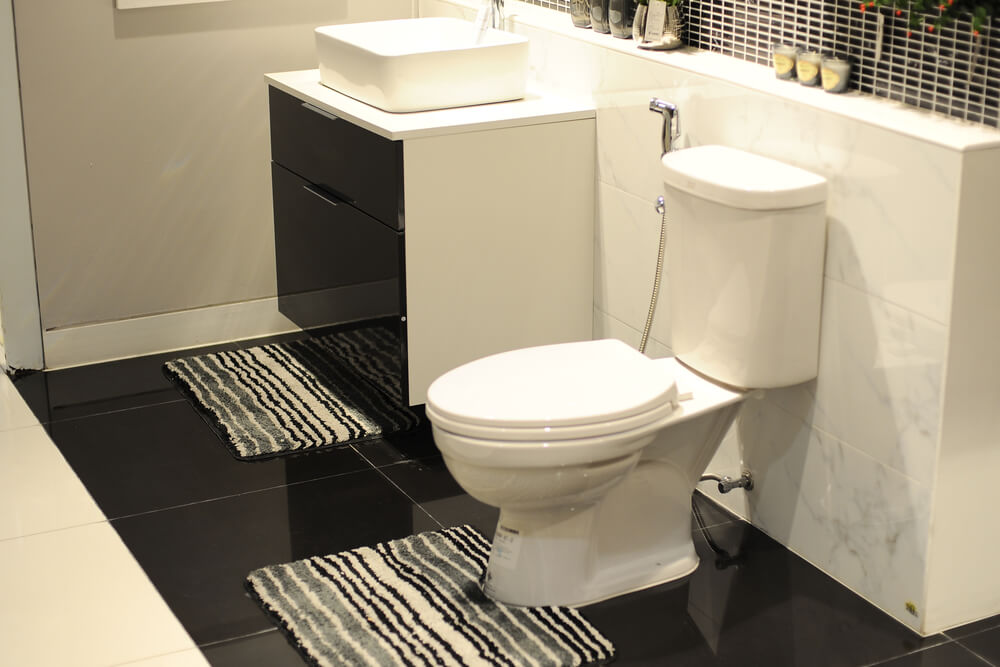 Partially concealed trapway toilets are exactly what they sound like. This type of toilet combines the shape and structure of an exposed tramways and a fully skirted trapway.

There is no single style of partially concealed trapway toilets on the market. Any toilet that falls somewhere between an exposed or skirted design fits into this category. 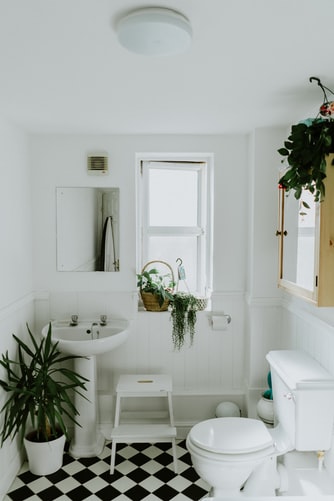 Traditional toilets rely on heavy-duty plumbing to dispose of wastewater. These pipes take up a lot of space and are expensive to install in an existing home.

An upflush toilet eliminates the need for additional plumbing with a special tank — called a macerator — that breaks up waste and connects to your existing plumbing. You can even connect the wastewater lines from your bathroom shower and sink to the macerator. 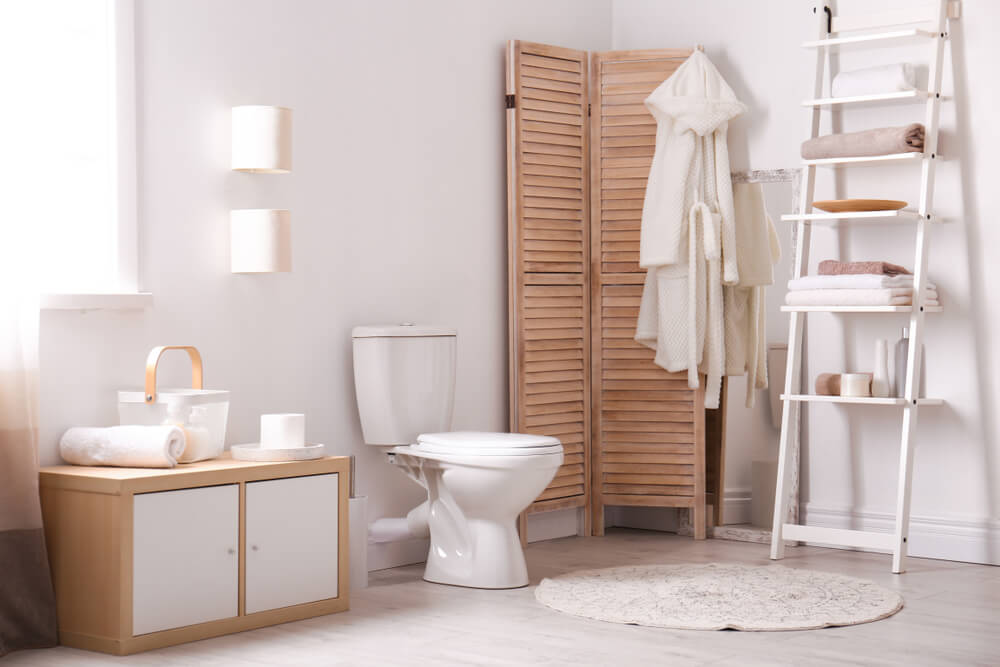 The only difference between a rear discharge toilet and any other design is where the wastewater leaves the bowl. In this style of toilet, the “exit” pipe extends from the back of the toilet rather than through the bottom (and into the floor).

Rear discharge toilets are most often used as a space-saving strategy. These toilets may be connected to regular plumbing or to a macerator tank hidden behind the wall.

By hooking up the toilet to a pipe in the wall, you can do away with bulky plumbing under your bathroom floor. This is especially important for apartment buildings and single-family homes with thinner floors. 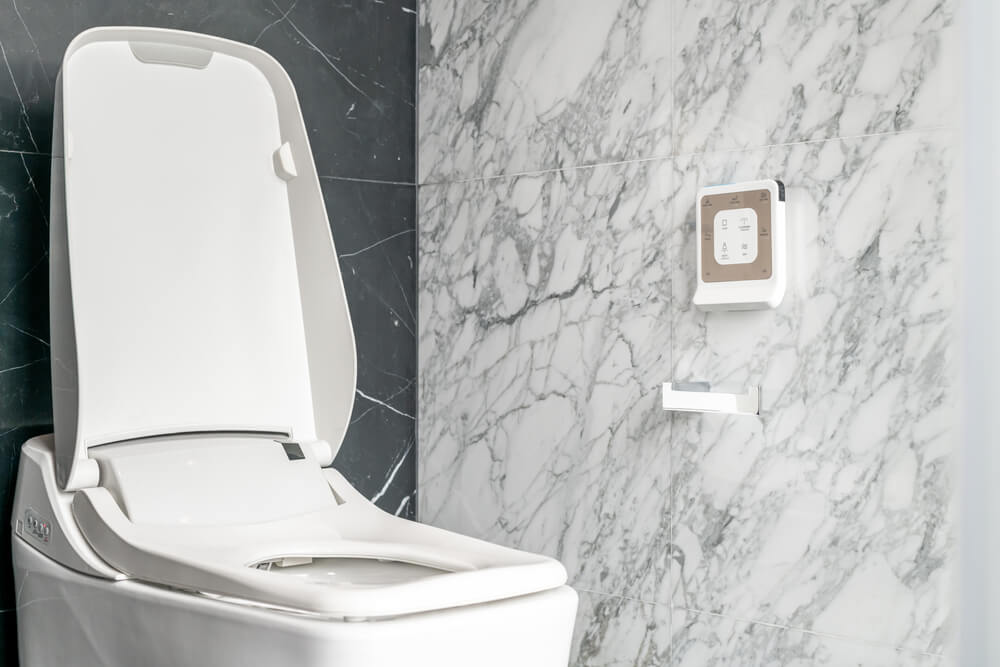 Asian countries like Japan are famous for their high-tech toilets. And it’s easy to get swept up in the potential comfort and convenience of installing a so-called smart toilet in your personal bathroom.

Another great benefit of many smart toilets is the ability to specify how much water is used with each flush. This feature is often even more precise than dual-flush toilets. 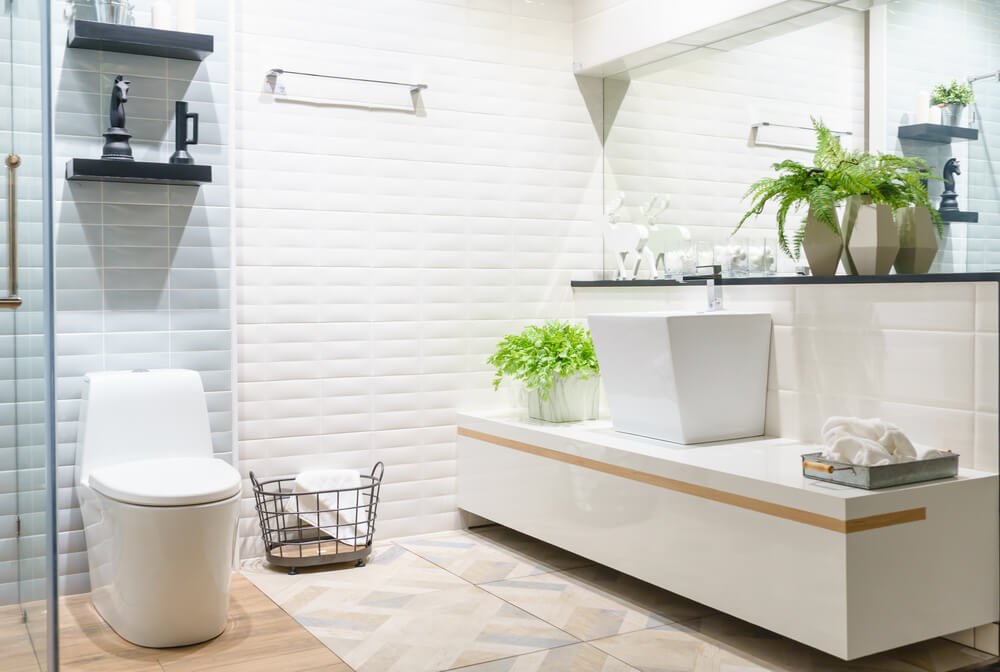 Speaking of efficiency, you can’t go wrong with a toilet specifically designed to use as little water as possible. While water-efficient toilets once had a reputation for clogging easily, the technology has caught up to demands in recent years.

The current standard for high-efficiency toilets is less than 1.28 gallons of water per flush. However, several models have whittled this number down to less than a gallon of water.

Like many other types of toilets, you can’t necessarily identify a water-efficient model by outer appearance alone. The features that make a toilet water-efficient are all housed inside.