When shopping for a new home, the average person spends very little time looking at or thinking about the ceilings. As long as everything is structurally sound, one ceiling is just like the next… right?

Actually, there are many different types of ceilings used in residential homes. Some of these ceilings have unique functions. But most ceiling styles are a matter of personal taste!

Whether you’re buying, building, or remodeling, here are the best residential ceiling types that can be used in your own home.

The Different Types of Ceilings: 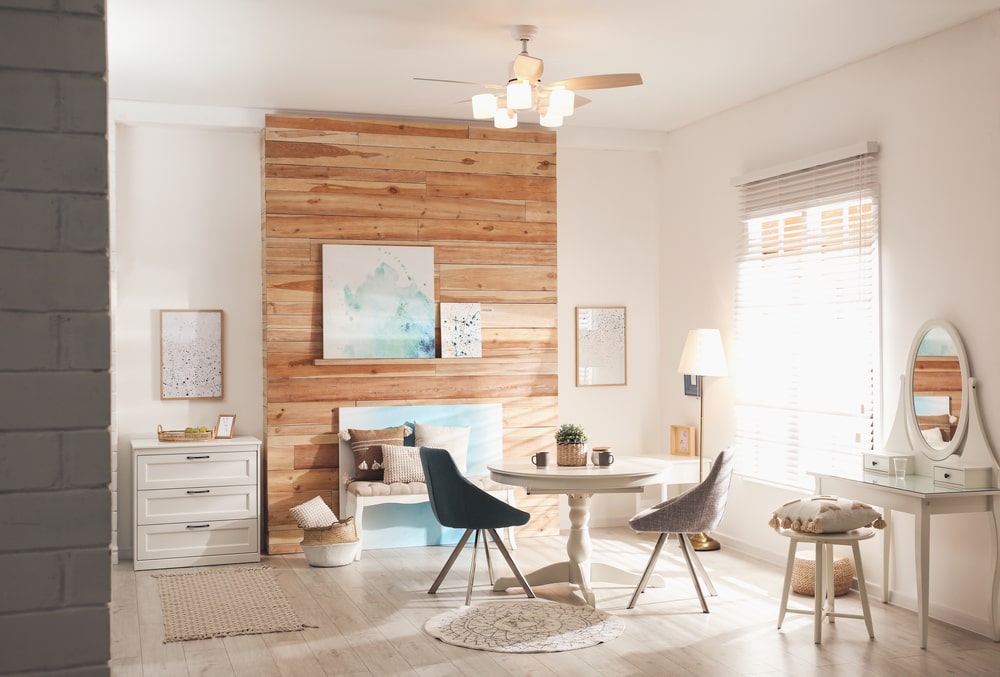 Conventional ceilings are what you’ll find in the vast majority of homes today. And there’s nothing wrong with this tried-and-true ceiling style.

The typical residential ceiling is made of drywall or plaster and may be smooth or textured. Outside of hanging light fixtures or simple crown molding, conventional ceilings are free of ornamentation.

The average conventional ceiling is about 8 feet tall. But these ceilings can reach up to 10 feet tall before entering into vaulted territory!

Ceilings finished with drywall or plaster can be easily given a decorative texture. Popcorn ceilings are a now-infamous example of this trend but there are plenty of other textured finishes to choose from.

Textured ceilings contrast beautifully against smooth walls. Adding texture to your ceiling can even hide flaws like discoloration and uneven patches.

If you decide to install textured ceilings in your own home, be sure to select a subtle finish that will age gracefully. Skip the popcorn finish and go with a stucco-style ceiling for a contemporary look. 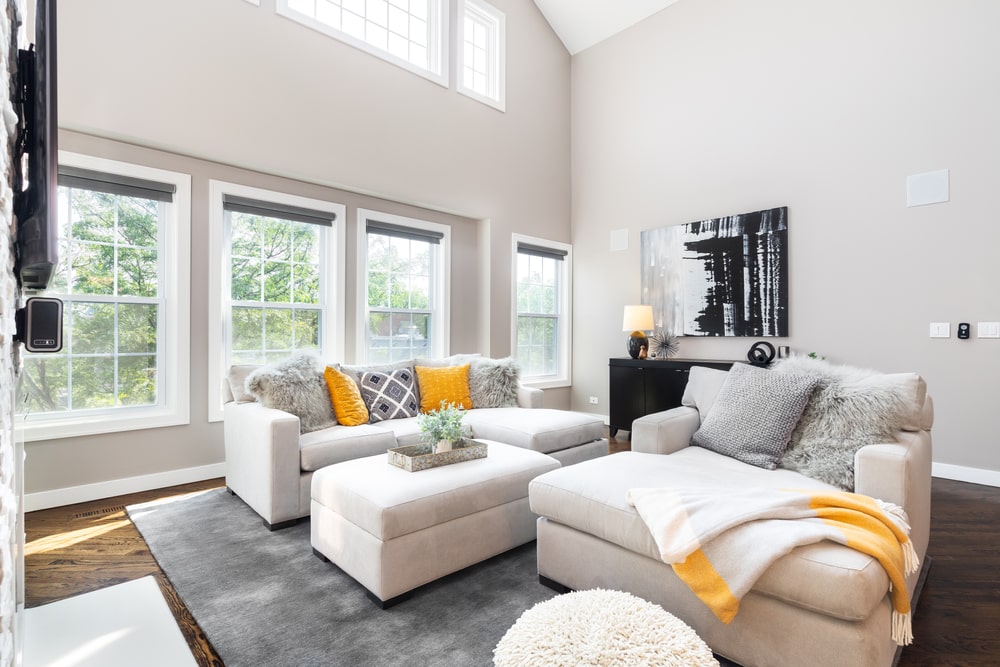 Few types of ceilings are pined after to the degree of the vaulted ceiling. Vaulted ceilings often go hand in hand with open-concept floor plans, offering an airy atmosphere and plenty of vertical space.

While we can use this term to refer to any taller-than-average ceiling, vaulted ceilings come in several different styles. (We’ll learn about some of the most popular vaulted ceiling styles in a moment!) 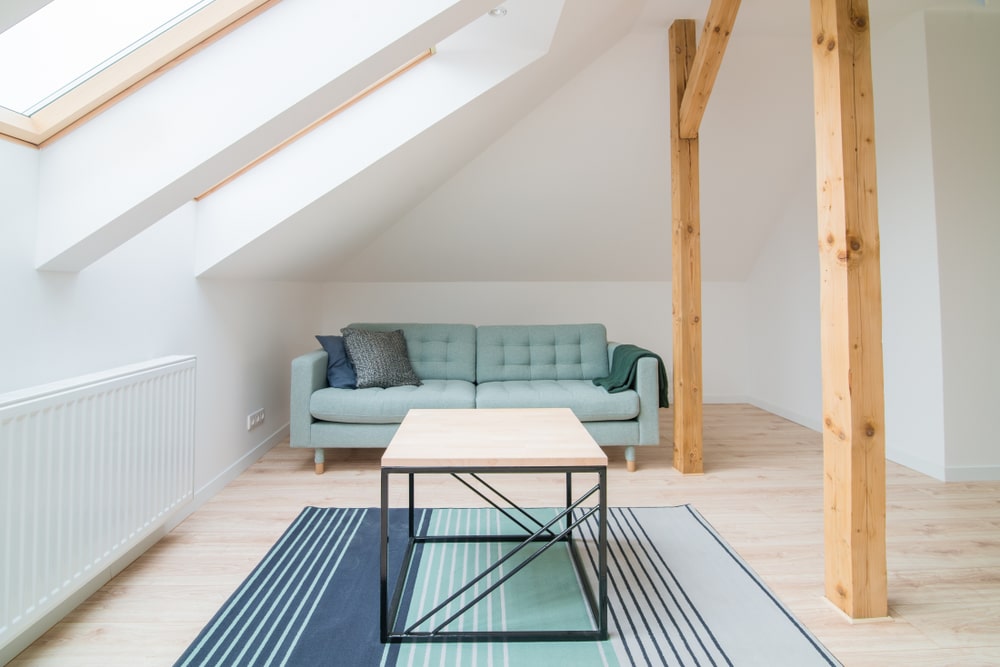 A shed ceiling is a slanted ceiling that is higher on one side than the other. Shed ceilings are extremely common in attics and lofts that sit just below the home’s exterior roofline.

Although shed ceilings are often a product of necessity, some designers opt for a slanted ceiling purely for the aesthetic. A well-placed shed ceiling can create the illusion of a taller space overall.

The slope of a shed ceiling can be subtle or dramatic. Take into account that mounting lights and other fixtures to a slanted ceiling may require special techniques. 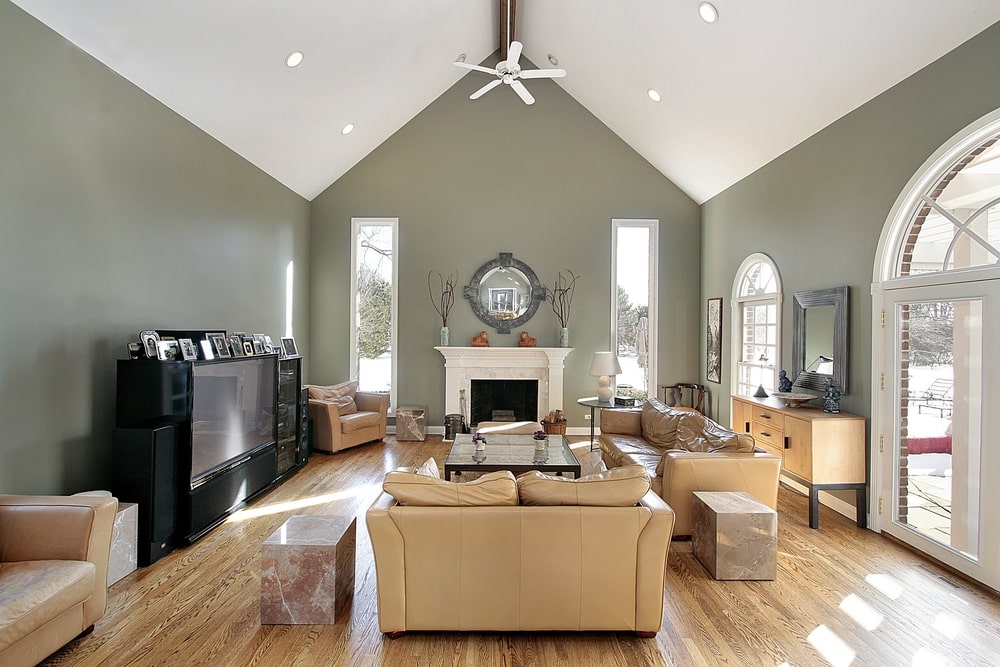 Like any other vaulted or slanted ceiling, a cathedral ceiling can be constructed at any angle. More often than not, though, these ceilings follow the pitch (or slope) of the roof above.

Cathedral ceilings are dramatic in and of themselves. Fill some of that vertical space and draw attention to your home’s unique ceiling with a statement light fixture or decorative beams. 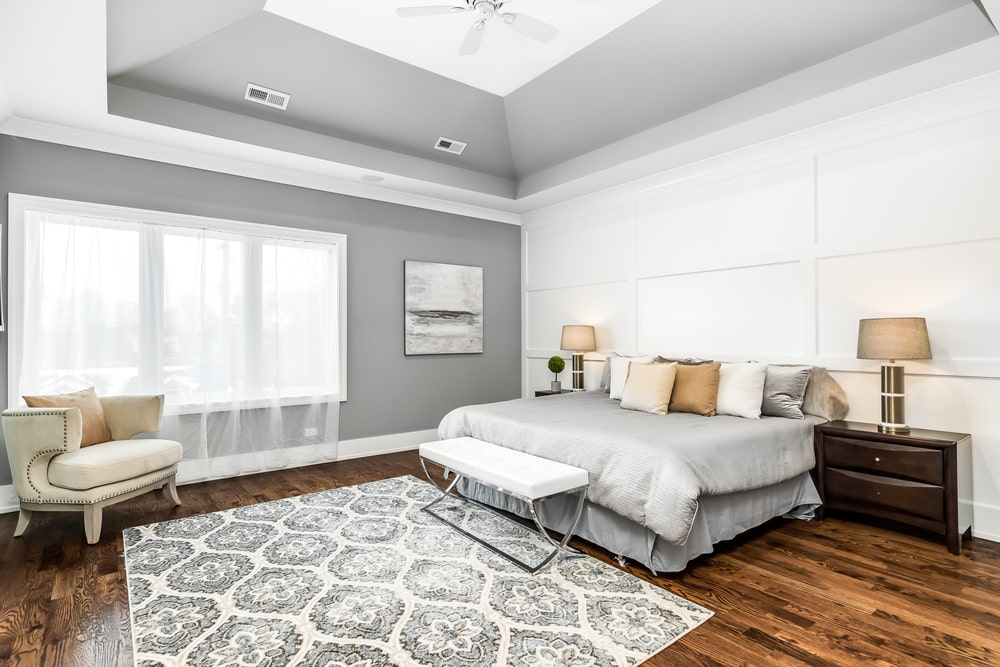 Traditional cove ceilings feature a curved transition between the ceiling and adjoining walls. But over the years, this concept has expanded to include a wide range of styles.

In modern architecture, the standard curved cove transition is often replaced with sleek angles. This design is much better suited to today’s home while still offering the multi-dimensional aesthetic of a cove ceiling.

Emphasize your existing cove ceiling with contrasting paint colors or updated crown molding. Some homeowners even use built-in light fixtures or integrated LEDs to draw attention to their cove ceiling. 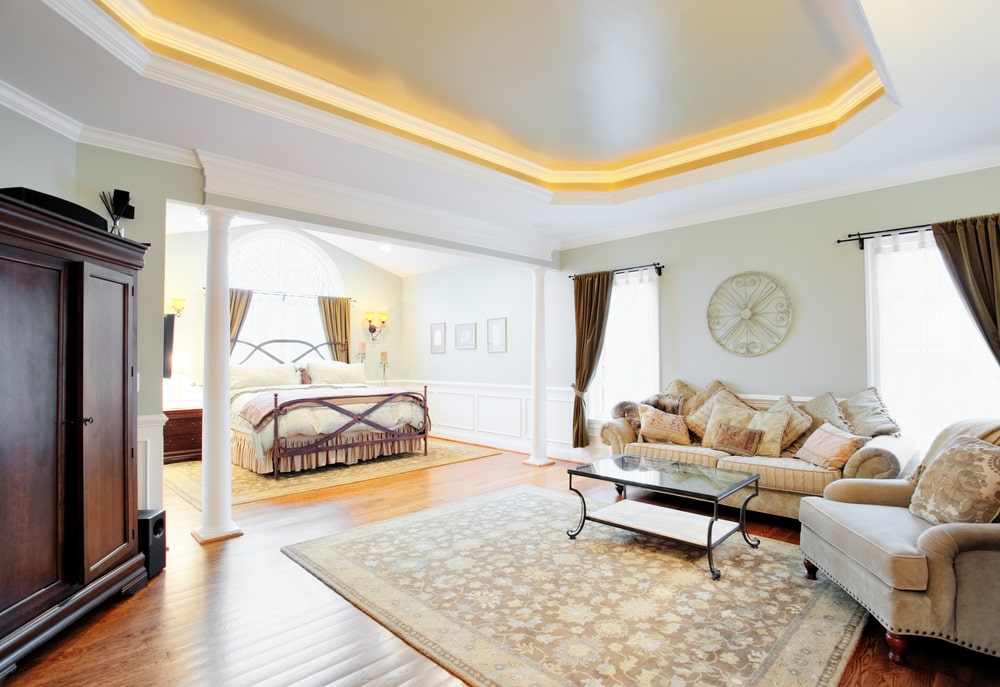 A tray ceiling — also known as a recessed or inverted ceiling — features a recessed center (or tray) that is higher up than the ceiling’s perimeter. The distance between the tray and the rest of the ceiling can vary.

This type of ceiling is an interesting alternative to a conventional or vaulted ceiling. Details like integrated lighting, crown molding, and color scheme can be used to coordinate a tray ceiling to match any style of home decor.

At first glance, it’s hard to differentiate between a cove ceiling and a tray ceiling. And, in reality, it can be near-impossible to pinpoint where one type ends and the other begins.

A coffered ceiling features a pattern of recessed panels. This type of ceiling can make a room feel taller without actually adding any height to the existing ceiling.

Coffers (the recessed panels of a coffered ceiling) can be painted to match or contrast with the surrounding ceiling. Some coffered ceilings feature decorative panels in place of plain drywall.

Coffered ceilings are frequently used to hide flaws without refinishing the entire ceiling. If your ceiling is in need of some surface-level TLC, consider converting it into a coffered ceiling to save time and money (and add some creativity to your living space!). 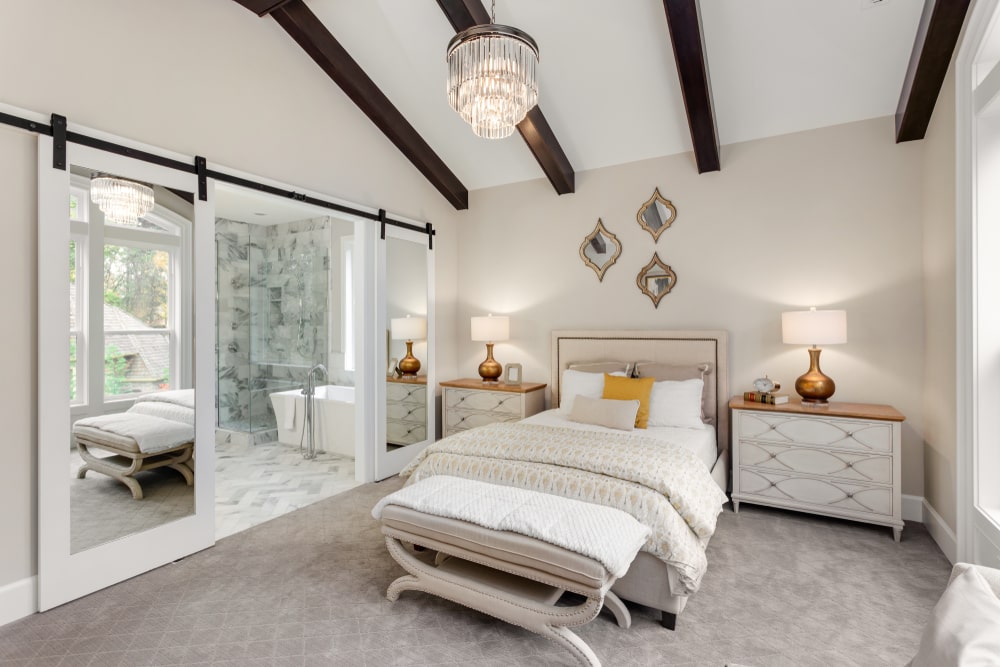 All ceilings contain rafters of some kind. But in contemporary homes, these rafters are typically hidden by layers of insulation and drywall.

A beamed ceiling puts these rafters on display to add intrigue and charm to even the most basic ceiling. These beams can take on many different shapes and can be left natural or painted to match the rest of the room.

It’s important to note that exposed beams are not always functional! Artificial beams can be added to any ceiling to mimic the look of exposed beams without the prerequisite architecture. 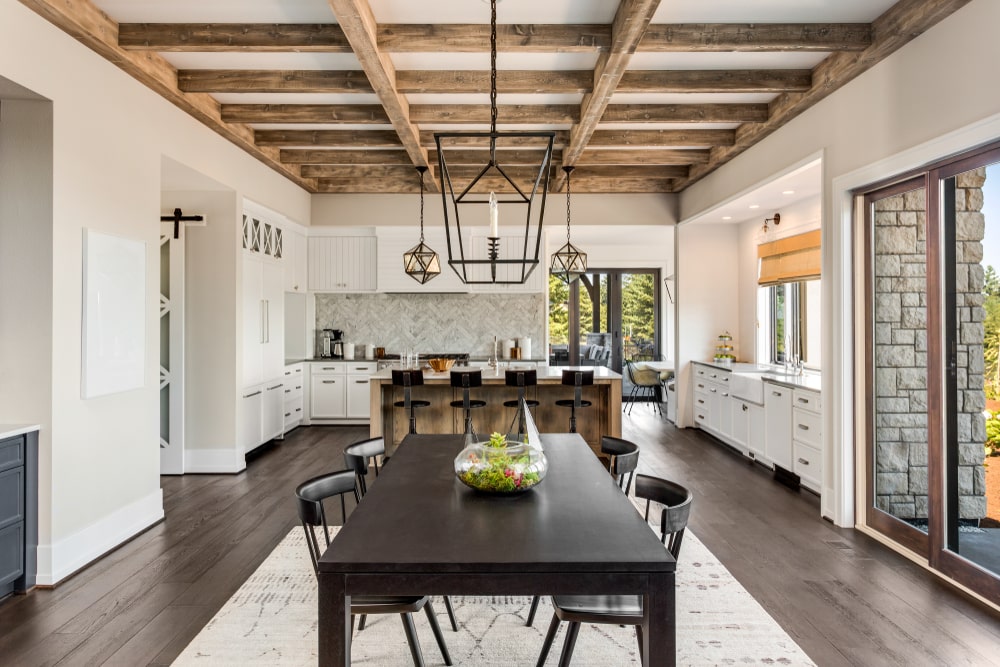 What do you get when you combine the rustic appeal of exposed ceiling beams with the traditional aesthetic of a coffered ceiling? A box beam ceiling!

This type of ceiling features some of the best characteristics of beamed and coffered ceilings, blending perfectly into any home with a farmhouse- or cottage-inspired design.

While you can cover the wood grain texture of a box beam ceiling to suit your home decor, this essentially turns it into a coffered ceiling. So if you ever grow tired of the exposed woodwork, it’s easy to update your ceiling to match your new style. 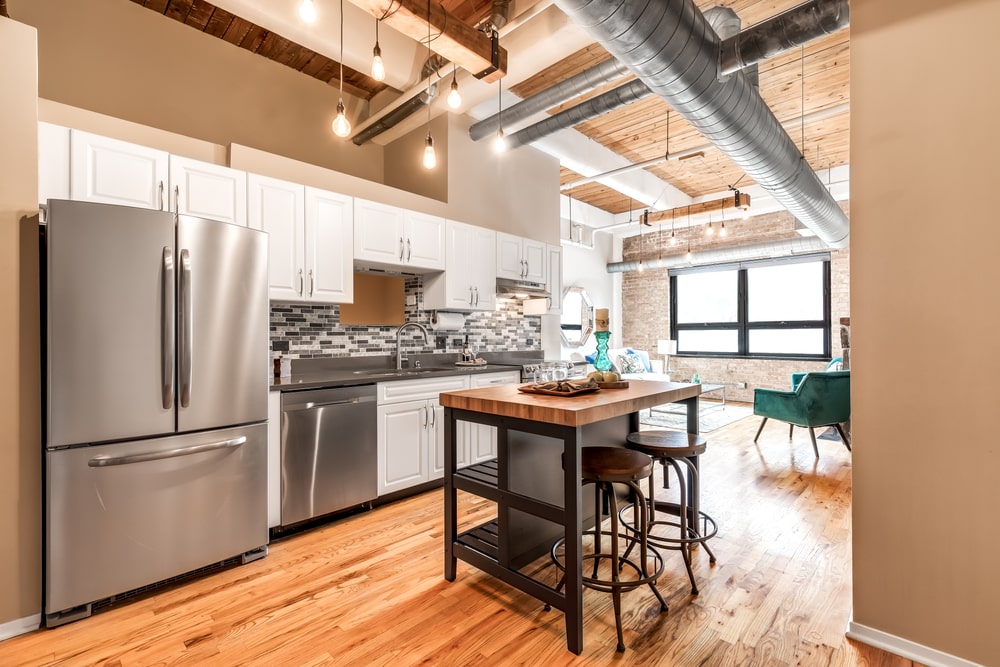 If not for ceilings, our home’s ductwork, plumbing, and framing would be left completely out in the open. But when it comes to exposed ceilings, baring it all is the whole point.

Exposed ceilings are, in a sense, the sheer lack of a traditional ceiling. Instead of a finished surface hiding them from view, the building’s structural elements are allowed to be a part of the living space below. 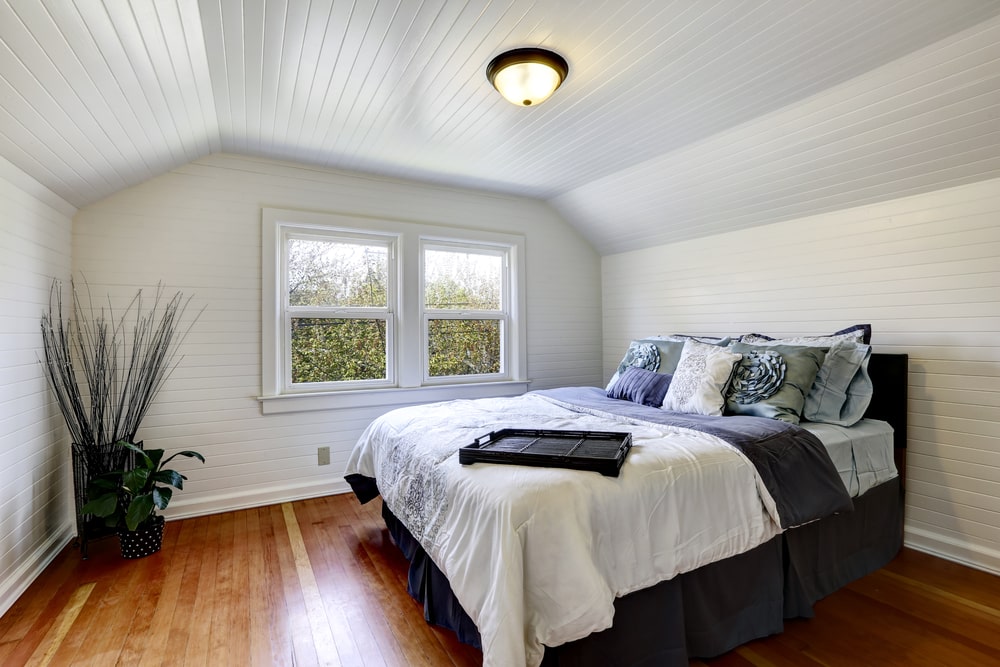 There are countless ways to add texture to interior walls (even if it’s just plain drywall hidden underneath). Many of these ideas, including wood planks, can also be applied to the ceiling.

Wood planks can easily be mounted to a conventional or vaulted ceiling. Along with adding visual texture, these planks can help disguise stains or other superficial damage to the existing ceiling.

Wooden plank ceilings can feel outdated in the wrong context. Be sure to pair your wood-textured ceiling with bright, modern decor to offset this. Painting the wood planks white is another great way to update this trend. 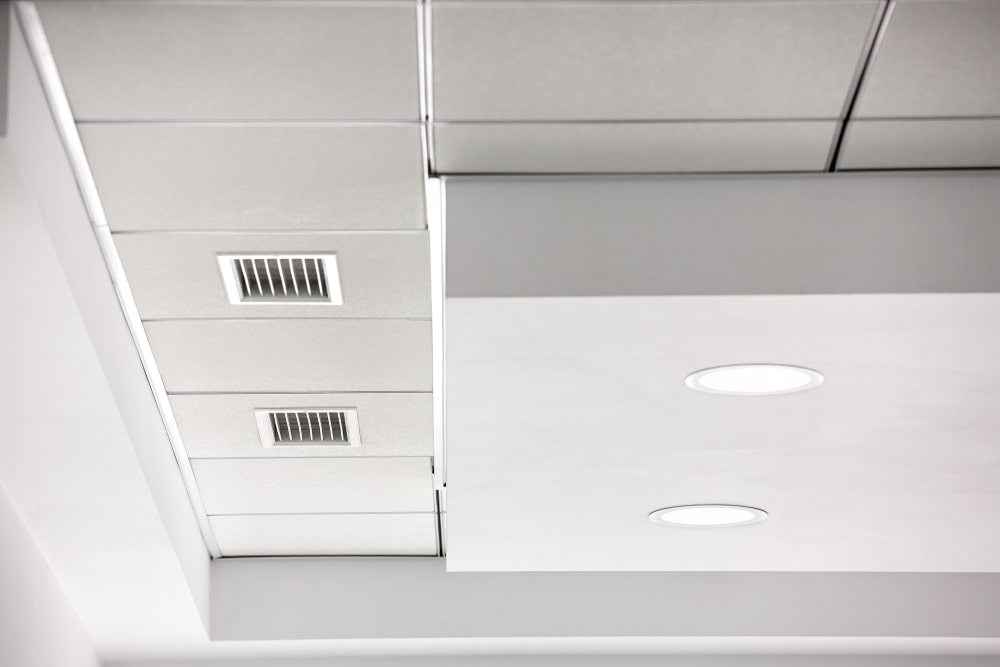 A suspended ceiling, or drop ceiling, is a permanent support system covered with removable tiles made of fiberglass or another lightweight material.

Suspended ceilings have a bad reputation in the residential design world and are most often seen in commercial buildings. But these ceilings do exist for a reason. 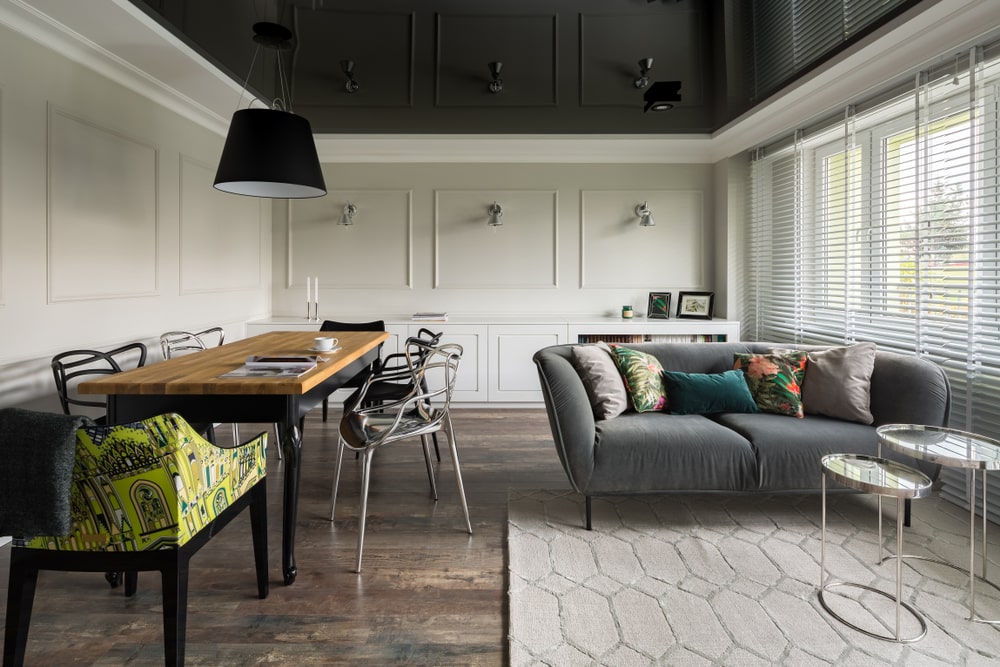 Most stretch ceilings feature a supportive perimeter that the membrane is mounted to. This perimeter takes the place of the grid system used in traditional suspended ceilings.

The most interesting part of a stretch ceiling is the ability to hang a membrane printed with a pattern or image. Stretch ceilings can also be lit from above, creating an ambient glow that’s perfect for a modern game room or bachelor pad. 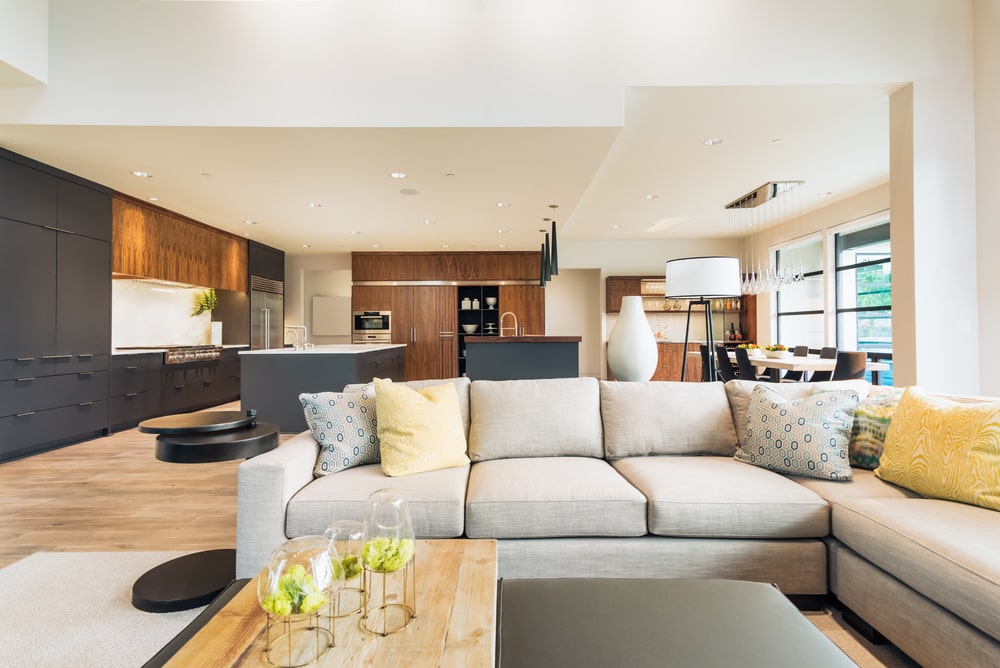 The ideal ceiling for any room may not be completely flat or symmetrical. Varying ceiling heights and angles can be used in a single area to maximize space without making any major structural changes.

This type of ceiling can accommodate plumbing, rafters, and ductwork without lowering the entire room height. Open-concept floor plans benefit greatly from this concept.

While asymmetrical ceilings can be a design choice, most examples are following the pre-existing shape of the home’s roof and structural elements housed inside the ceiling.

Domed ceilings are incredibly rare in contemporary home design. But if you want to make a statement with your new ceiling, no other style can compete!

A domed ceiling is a ceiling that curves up to a central point. Domed ceilings can encompass the entire space or be a small section of a more conventional ceiling.

Building a smooth, curved shape into a residential ceiling is no easy feat. More practical versions of this trend feature several flat sides connected by support beams for a dome-like appearance.

Barrel vault ceilings can be finished with regular drywall, wood planks, or even brick. This style works best in hallways and elongated rooms.

A groin vault ceiling is created by intersecting two barrel vault ceilings at a right angle. Instead of a singular arch, this creates a dome-like shape with pronounced “ribs” emerging from each corner.

One of the greatest benefits of a groin vault ceiling is its ability to trick the eye into seeing a taller, more open space. A square ceiling can be covered with one groin vault. Rectangular rooms require several groin vaults in a row.

This type of ceiling is certainly interesting. But it’s best reserved for small spaces like a foyer or stair landing rather than entire rooms. 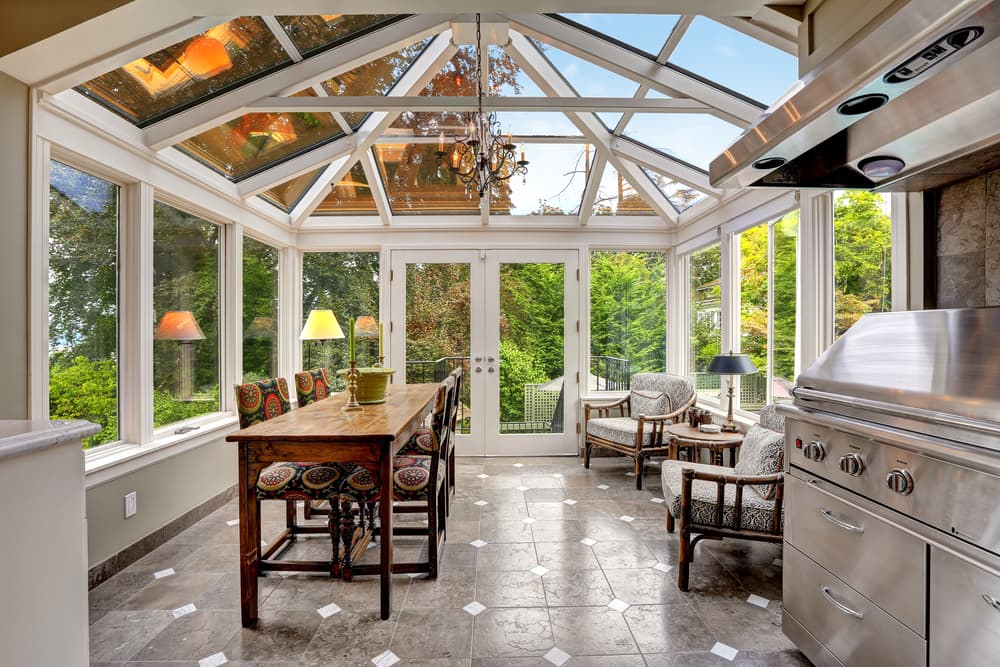 A glass ceiling probably isn’t the first thing that comes to mind for your new home design. But if your home features a sunroom or similar living space, a glass ceiling could be exactly what you need.

Glass ceilings certainly aren’t practical in every scenario. Still, this type of ceiling is a great way to maximize a room’s natural light and make the space feel as large as possible.

Of course, an all-glass ceiling isn’t your only option. Well-spaced skylights can replicate this look without the same degree of upkeep or initial expense.