Chim chiminy, chim chiminy, chim chim cher-ee! Chimneys have been around since Mary Poppins first flew in on her umbrella, since Santa Claus delivered his first present, and since the Romans started baking. An interesting history comes from the ever-evolving examples of the type of chimney and its different shapes, forms, and purposes.

However, chimneys did not become popularized in houses until the 16th and 17th centuries, and aren't we glad that they did! There is nothing like curling up beside the fireplace on a cold winter night. That fireplace ain't nothing without a chimney though.

They can be built from many unique materials which we will discuss below and can have a wide variety of different looks. The type of chimney can be chosen for being aesthetically impressive, functionally magnificent, or all of the above.

Their purpose is to remove harsh gases and smoke from inside so you can enjoy your stove, fireplace, or boiler without worry. So without further adieu, let's take a look at 19 examples of the type of chimney you can find in a home. 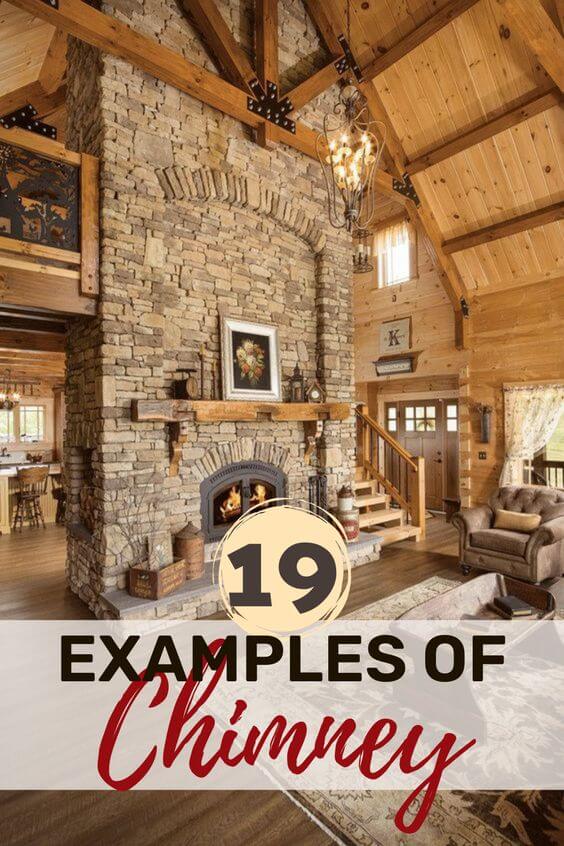 A brick chimney always gives off a cozy and homey vibe while being trendy and stylish. Brick has been a common material used for chimneys for a very long time now, but since it is a porous material, can have some defaults.

Spalling brick, cracks, deteriorated mortar, or water leakage can be major problems that cost a lot to fix. Look for modern techniques to apply in a brick chimney installation.

You don't often see Chimneys in modern houses. That's because there are a lot of advanced chimney-less fireplaces out there nowadays. A chimney can bring a lot of dimension to a house though.

I absolutely adore a well-built stone chimney. The blue and gray tones feel so modern and chic while the stone gives a vintage and natural vibe. Stone is porous like brick but its hard surface makes it much more resistant to moisture.

Different shapes and sizes of stone create an artistic and abstract feeling to the chimney itself.

An excellent material choice when planning a chimney! Stainless steel is a wonderful conductor for heat, is durable, and doesn't rust. The cool look of metal makes for a stylish design for a modern home or an industrial vibe.

Always double-check that the type of metal used for the chimney is of high-quality because some metal can be prone to warping at high temperatures.

Some might say that a concrete chimney isn't as attractive as a stone or brick one, but I think with the right design this type of chimney can be just as stylish. It is definitely a more economic option and can be built a lot faster than brick or stone.

You could always consider painting the concrete as well to match your home's color scheme.

This is a passive form of solar heating and an energy-efficient option that allows for ventilation. The chimney is made of a thick thermal mass that absorbs the heat of the day and releases it into the cool home.

One form of thermal mass that can be used is Cob. Cob is made up of water, subsoil, straw and sometimes can contain lime.

The pipe protruding from the wood stove must be vertical at all times, so typically a chimney is built around it after placement. Depending on the type of wood stove you have, will tell the material needed for the chimney surrounding the exhaust.

However, metal, masonry, and prefabricated chimneys can all be possible options.

Are you on a budget? In that case, you might want to look into a factory-built chimney option. This type of chimney will not perform the same as a brick or stone chimney and will most likely need more frequent maintenance.

Check with the company you are buying from to ensure you are getting the right prefabricated chimney for your fireplace or stove.

You are probably used to seeing those old school metal chimney caps, but there are other options. This chimney cap is barely recognizable and blends seamlessly in with the design of the chimney and the house.

It still does a great job of protecting from water getting in, however, they recommend that the chimney cap should have an overhang of at least 2 inches. This ensures that the rainwater is directed off of the chimney.

In a home, a large chimney can also double as a room divider, separating the kitchen from the living space. The beautiful masonry acts as an artistic substitute for a regular wall while also functioning for heating. This type of chimney is a jaw-dropping feature that your guests will rave about.

As much as I love the bold contrast of a black wood stove against a white wall. There is something to be said about the white metal look. It blends calmly into the design and still has a warm and homey feel to it.

The chimney of a Swedish fireplace is always found in a circular column form. It sprouts up from the fireplace and is topped with an elegantly detailed crown that represents the Scandinavian monarchies. A truly elegant and luxurious design.

If you have a wood stove with an unprotected chimney stretching upwards, be careful with the walls behind. A brick wall can be placed strategically behind the chimney pipe for a safe installation and a beautiful home design.

Paint your stone chimney to match the colors of your walls for a harmonious look. The chimney and fireplace blending into the house will allow the reds, yellows, and oranges of the fire to really pop and make a statement.

First of all, I think we can all agree that this freestanding outdoor fireplace and chimney are absolutely dreamy! They have chosen to use a rounded chimney cap on this type of chimney which not only looks charming but works well too.

The rain will simply run down the rounded sides, protecting the chimney from any moisture.

A copper chimney cap gives you all the same functionality as any other chimney cap while being aesthetically pleasing. Copper has been trending again in the last few years and for good reason. It looks stunning against an all-white brick home or sleek next to painted black concrete.

A masonry chimney cap isn't the most effective idea but could still work for some time. The main idea of a chimney cap is to protect from rain and moisture, however, brick and stone are both porous materials and therefore are not completely moisture resistant.

The recommended materials for a chimney cap are stainless steel and copper.

Painting your brick with a lime wash could be a really smart idea not only because it looks great but for its hidden benefits. Limewash is a natural fungicide, is UV resistant, and won't chip or peel.

That's because, unlike other paints, the limewash is absorbed into the brick instead of sitting on top.

If you are considering adding a chimney to a pre-existing home or to a new build you should always talk to a professional. They may be able to recommend something prefabricated that you can get installed, or maybe they will look at doing a custom build for your unique home.