Looking for small man cave ideas? You're not alone. Having a man cave can be a real dream come true; an oasis from the chaos of day to day life. Sometimes, after work, all you want to do is come home, kick off your shoes, and have some time to yourself. Man caves are perfect for that; they're your own space, where you make the rules.

However, it can be pretty hard to find space to build a man cave. This is especially true if you live in a smaller house, or if your home doesn't have a basement or garage. Small man caves, when they're done right, pack all the punch of a giant man cave in a tighter space.

They're a great creative challenge- the small area forces you to think outside the box. Here are some awesome man cave ideas for small rooms, that really maximized the space they had to create a masculine oasis!

The best thing about a man cave is that it doesn't have to subscribe to any one style or theme. Not every man cave has to be a leather couch and a giant TV- although a fair amount of them are. The greatest thing a man cave can be is a representation of the man who creates it.

It should reflect the personality and taste of that person, and therefore be a place where they feel totally comfortable and at ease. Whether you're a movie buff, a gamer, or the world's biggest Real Madrid fan, your man cave should be all about you! 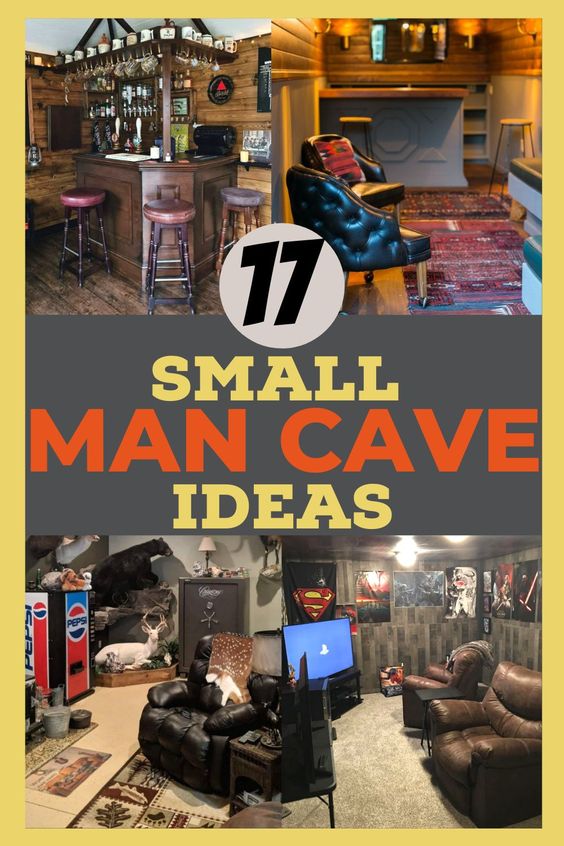 It has all the atmosphere of a high-end sports bar but in a very small space. Every piece of material is high-quality, and it has a lighter color tone that brightens up the dark basement. The whole room is kept simple yet classy, making it the perfect place to watch a football game, soccer match, or just have a drink with a couple of friends.

There are few things that match up with old-school machismo like a good cigar. Cigar rooms were all the rage back in the sixties when groups of men used to get together to enjoy a drink and conversation paired with fine tobacco.

If you like to embrace that retro, macho aesthetic, but don't have a lot of space, this cigar room man cave might be just right for you! It's got everything you need: luxury leather chairs, cigar-friendly wallpaper, and a nice library- all in a very compact room!

Sometimes, the basement and the garage aren't going to be an option for your small man cave. If you have an attic, even one as tiny as this, you can create an awesome pub that everyone will love!

Again, here, we see that there is lots of authentic stuff packed into the room. There's a bar, a bench that has a great retro feel, and the brick rear wall brings the whole “put atmosphere” together. What a great man cave!

This is the perfect place to enjoy a few rounds after work as a way to unwind and blow off steam. It's an equally great spot to get lost in an RPG and realize you've stayed up five hours later than you were supposed to.

What I'm saying is it's a great place for a gamer to relax and enjoy what they love. It keeps things minimalistic, and the focus is on the screen, where it should be for a gamer's man cave!

Now here is proof that a completely decked-out man cave doesn't necessarily require a ton of space. They've squeezed the love of baseball into every inch of this basement man cave. It's complete with a turf floor, and a glove-shaped leather chair!

If you're a fan of “America's Pastime”, take this awesome man cave as inspiration for what you can do with your own!

Perfect for the man who'd rather spend his days in a duck blind than a man cave, this basement retreat is dedicated to the hunt. It's an ideal place to spend time and unwind during the out-of-season months, and clearly, a wonderful way to display your trophies.

It could also work as a man cave starting point for somebody who's got a burning passion for taxidermy. That's probably a smaller segment of the population than avid hunters, but it works either way!

For the aspiring man cave builder who doesn't have any space at all in the home, this bar built inside a shed is a great idea! It looks amazing, with real wood accents everywhere and strong attention to detail that creates the feel of being in a real bar.

The classic leather bar stools are a totally awesome feature, too- much more comfortable than wooden stools and probably forty times cooler. If you need a place to kick back but have no more space in your house, this bar-in-a-shed man cave should be where you start brainstorming.

A true cinephile stops at nothing to achieve the perfect screening experience. No obstacle is too big- or too small, such as not having the space to build a giant home theater. This compact, two-seater cinema has all the fixtures of a great trip to the movies: plush chairs, movie posters, and of course the quality screen!

Plus, for most people, talking during a movie can ruin the experience, especially if you're watching one of your favorites. So, having a two-person home theater ensures that nothing will get in the way of you and a perfect movie-watching experience.

Admittedly, this man cave isn't exactly a “small man cave”. However, it makes the list because it demonstrates how to maximize the space that you have. Rather than have a large screen TV on an entertainment center, the homeowners chose a different route. They installed eight flat-screen TVs right into the wall!

For fans of a particular sport, rather than a specific team, this is the perfect way to catch all the action without constantly flipping channels. Plus, you could connect all the TVs to each other and create a giant, wall-to-wall screen for the big game!

This is a classy, small man cave office. If you're a creative type or want to make your work-from-home space more relaxing, this is a great example of how to do that!

The furniture is modern, clean, and stylish, and the natural light makes everything feel light and calming. Plus, a TV of that size in a room that small is perfect for a “big screen” feel because it takes up more space than it would in a giant, open room.

This corner bar makes the most of every little bit of space it's given. It's made of richly colored natural wood, has lots of bar decor, and the storage area at the top of the bar is pretty handy.

On top of that, that storage area, where wine glasses and beer steins are being kept, is reminiscent of British-style pubs. Do you want to have a man cave, complete with a bar, but don't have a massive basement? The alternative to having nothing is to cut the bar in half and go all-out!

This is a stellar man cave renovation, and by far, one of the best small man cave ideas out there! The whole garage has been covered in natural wood, and the bar area is fully functional and even has a beer fridge below the counter! It really does make the most of every inch, even in a space that is pretty small for a garage.

This is a great alternative to having the guys over to watch the game in your living room, or worse, just moving your car from the garage and plugging a TV in. The homeowners thought of everything in the design and didn't skimp on any part of it- you can't tell that this is a garage at all!

In the early 20th century, the United States decided to make alcohol illegal, and, as a result, illegal bars called “speakeasies” sprang up everywhere. A speakeasy is actually the perfect inspiration for a small man cave because they were often small, underground, homemade, and low-key.

This basement speakeasy has an awesome brick arch that leads to the booth area. If you want to drink in old-school style, or maybe set up a mafia empire, this small man cave is the perfect place to do it.

If you're not the “giant TV and beer' type of person, you shouldn't think that man caves aren't for you. Here is a phenomenal example of a simple, stylish man cave in a small room. The Persian rug, leather chairs, and overall lack of excess in the design make it a great place to hang out.

If you're a reader, writer, or musician who needs a bit of privacy, this is one of the best small man cave ideas you can use!

A great little nook for any movie, music, or comic book fan! It's the perfect place to keep your pop culture collection, read up on some message boards, and rewatch your favorite movies and tv shows as a way to unwind.

It's got a lot of style too; it's a bit eclectic without trying too hard and feels like a nice and comfortable place to spend time. If you're a pop culture geek, looking for a great man cave where you can get lost in your favorite stories, this small man cave has a lot for you to aspire to!

Or, more realistically, are you a budding intellectual who wants to feel surrounded by a wealth of knowledge, history, and culture?

If so, this is a great man cave for you. There's so much to love- maps, books, leather seats, a wooden ship, and even a moose's head. If you've got old-school ruggedness in your soul, how could you not love this awesome man cave?

Need more man cave ideas for small rooms? Here's a tiny man cave that made it to the list to prove that a man cave has no rules. It's perfectly acceptable to have a tiny couch and a TV in what looks like a room the size of a walk-in closet. Absolutely nothing wrong with that.

All your man cave needs to be is enough for you to relax and escape- and this does that job perfectly!