The laurel plant family consists of trees and shrubs that grow beautiful flowers or berries. They're a versatile family of plants that can be pruned and shaped into a privacy hedge or can be allowed to grow freely into a large tree.

Laurels come in many colors and sizes, and there are many varieties to choose from. Finding one that can easily adapt to your climate if there isn't a native option should be pretty easy.

How to Identify a Laurel

The laurel family is large. It has approximately 68 genera, or classifications, each containing several species within those genera.

So, what are the identifying features of a laurel? Laurels usually have a strong scent. The leaves are typically evergreen, which means they stay green all year long, and they have a leathery texture. The flowers usually grow in clusters and can be yellow, white, or green.

Laurels can be small shrubs or large trees. Several can be grown close to each other and trimmed to form a privacy hedge. They're more likely to stay small if they don't receive the right amount of water or grown in an area that's too cold or too hot.

Since laurels can vary so much in size, they can be difficult to identify at first. But, the variation means there are almost endless options for landscaping, making laurels a great addition to any garden or lawn.

Laurels are toxic if they're consumed, and there are very few exceptions. Many laurels produce berries that look edible, but consuming them may cause fatal reactions. Even eating the flowers, leaves, or stems can be harmful. Don't plant laurels if there's a risk of unsupervised children or animals consuming them. 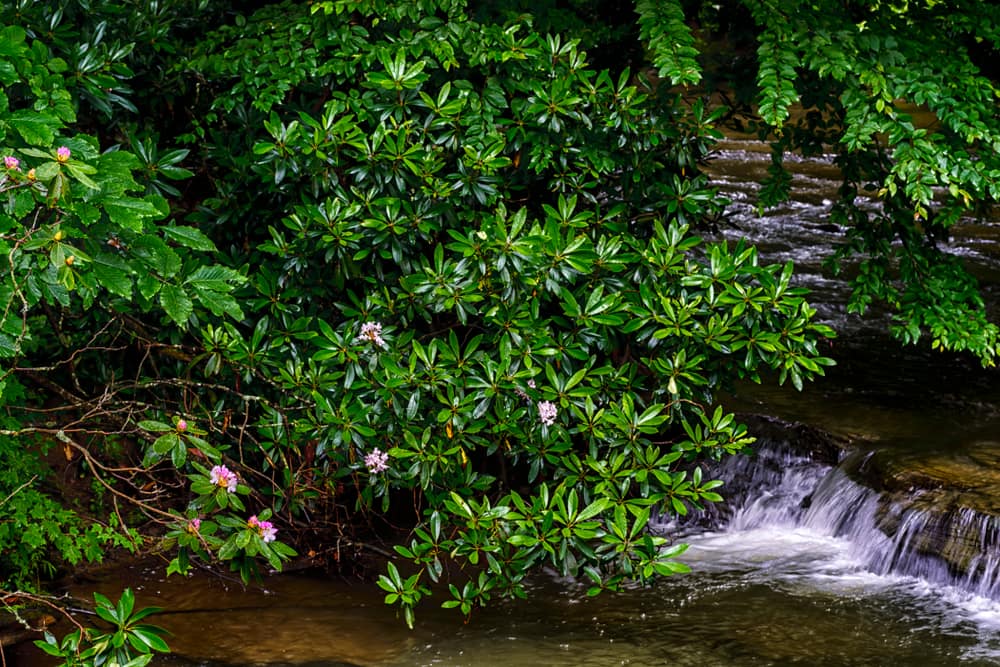 The American rhododendron is a water-loving plant that prefers to be in the shade. The plant should be given dappled sunlight, although it can tolerate more sun in cool temperatures. If you live in a hot climate, you may find that this plant will easily burn up in the afternoon sun. 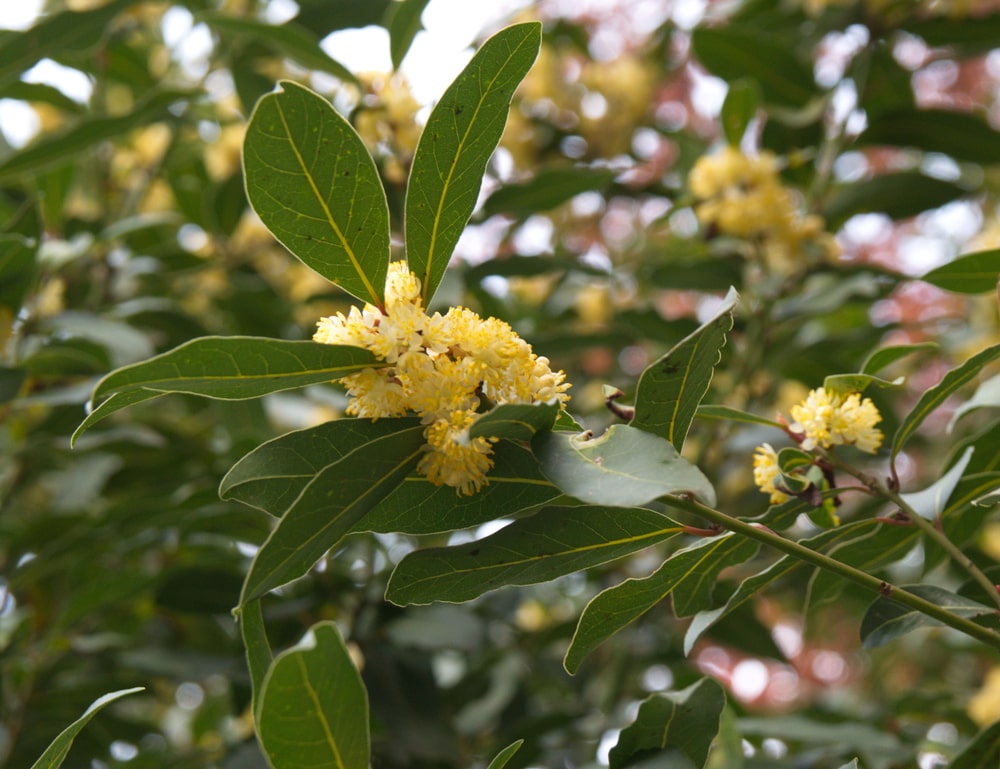 The Azores laurel is native to the Azores, west of Portugal, where the climate is tropical and warm. When grown in these conditions, this type of laurel will grow to be a tree that can reach up to 49 feet (15 meters). It boasts beautiful clusters of yellow flowers that look fuzzy from afar. When grown outside of ideal conditions, it should reach up to 26 feet (8 meters) tall. 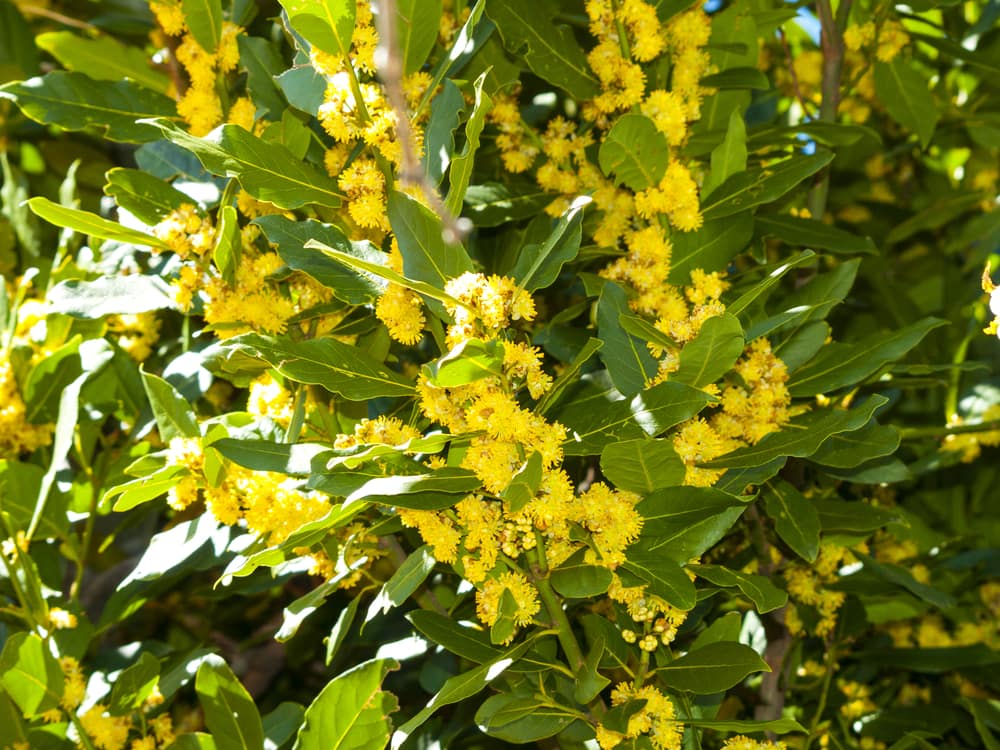 The bay laurel looks similar to the Azores laurel with its yellow clusters of flowers. When grown in its native Mediterranian area, it can reach up to 60 feet (18.28 meters) tall. The leaves on this laurel variety are better known as bay leaves and are frequently used in cooking.

The plant can be grown as a small tree in a container outside of its native climate or other herbs in an herb garden. It will need to be brought inside during the winter if temperatures drop below 20°F (-6.67°C). 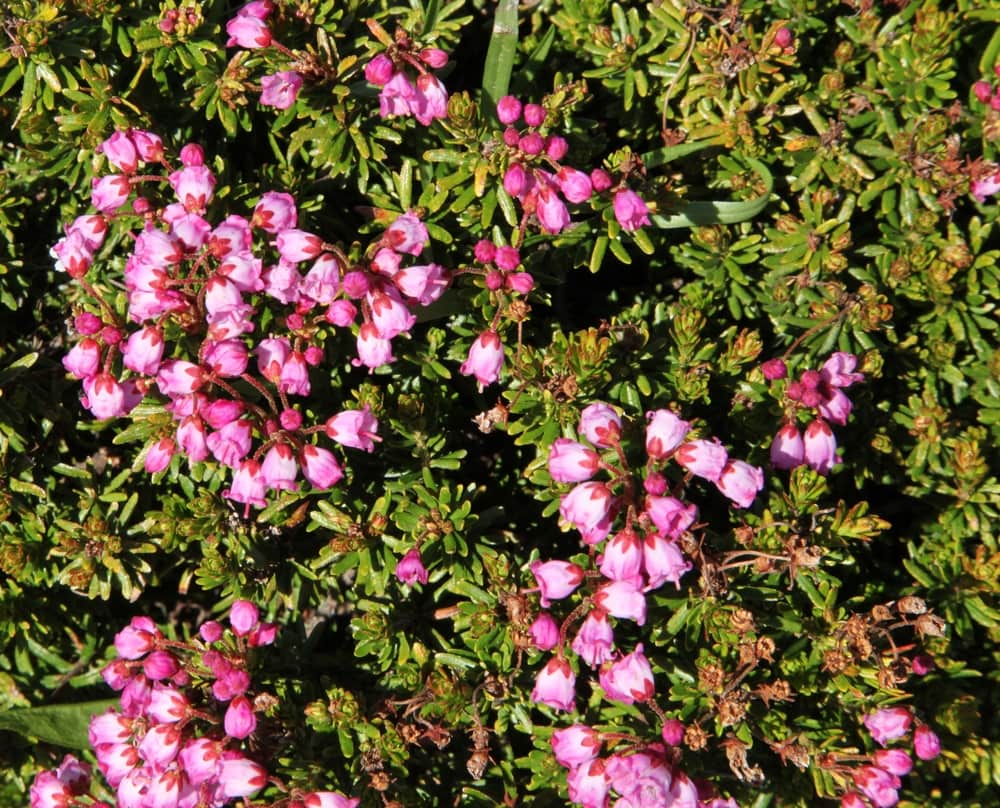 Bog laurel isn't actually a laurel at all, but it's wrongly identified as one so often that it earns its place on this list. It has leathery leaves and clusters of flowers, both of which are key identifiers of laurels.

This beautiful laurel imposter has small pink leaves and is native to North America. It's a small shrub that only reaches 8 inches (20.32 centimeters) tall, making it the perfect addition for the front or middle of flower beds. 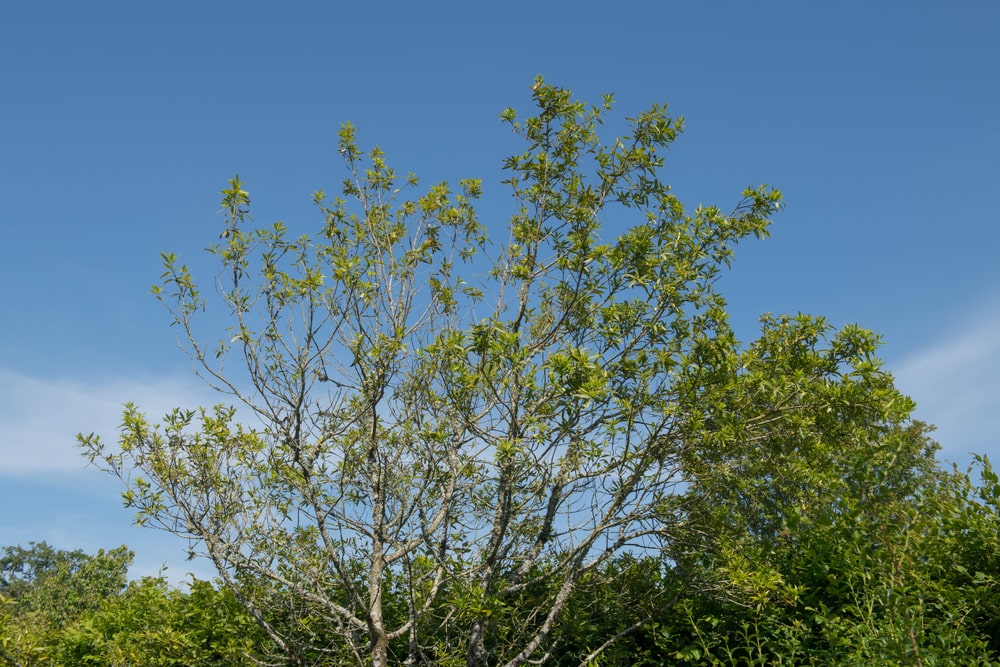 The California bay laurel is closely related to the bay laurel and is also used as a seasoning for food. It's also called pepperwood due to its peppery scent when the leaves are crushed. The height range of this variety of laurel is drastic.

It can be small enough to be a shrub or large enough to reach over 100 feet (30.48 meters) tall. A more common height is about 60 feet (18.28 meters). This plant also grows clusters of yellow flowers that are highly aromatic. 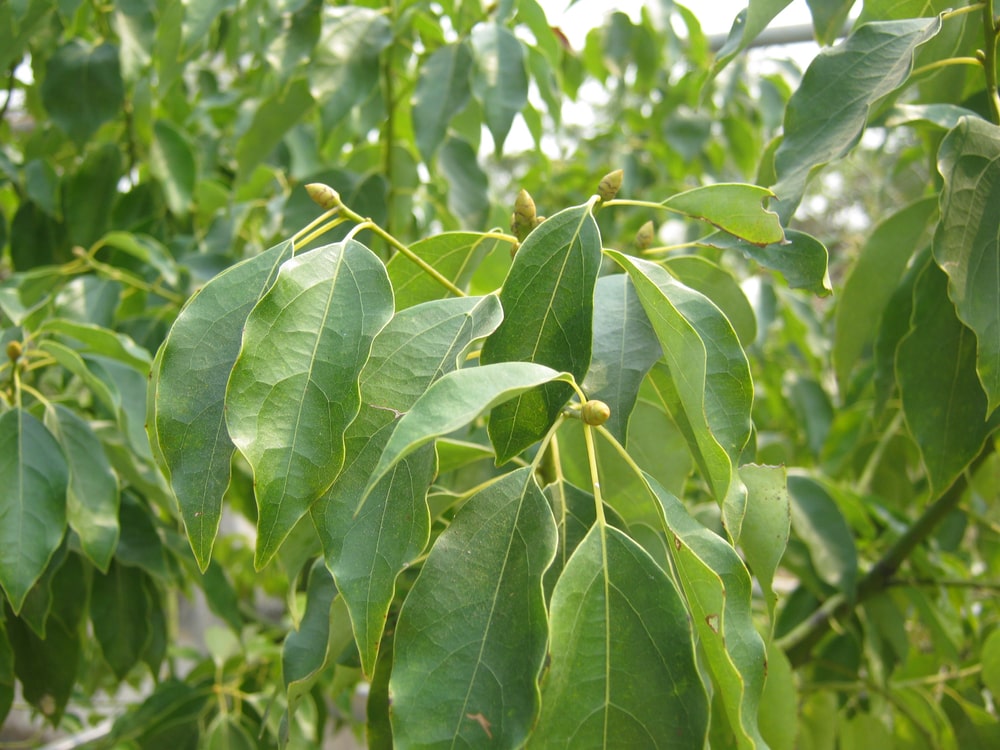 The camphor tree grows to a substantial size of 150 feet (45.72 meters) tall in its native habitats in Asia but is much smaller when grown in other places. This tree is often grown as a shade tree, but its oils are prized for medicinal uses.

The camphor tree is considered invasive in some areas since it can grow large quickly and drop thousands of berries that will sprout new trees if they aren't picked up. 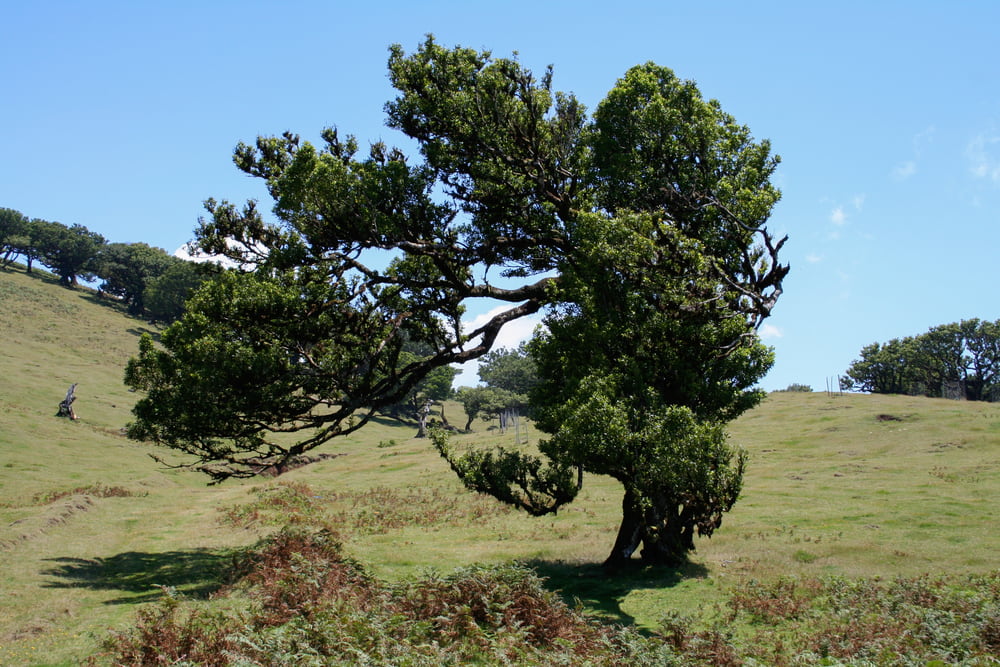 The canary laurel is native to the Canary Islands, which are just west of Morocco. This laurel prefers a subtropical climate with temperatures typically sitting around 70°F (21.1°C), but it can easily adapt to various climates.

It's been found growing on cliffs, clearings in forests, and on the slopes of hills. It grows clusters of flowers that range from yellow to creamy white and can grow up to 82 feet (25 meters) tall. 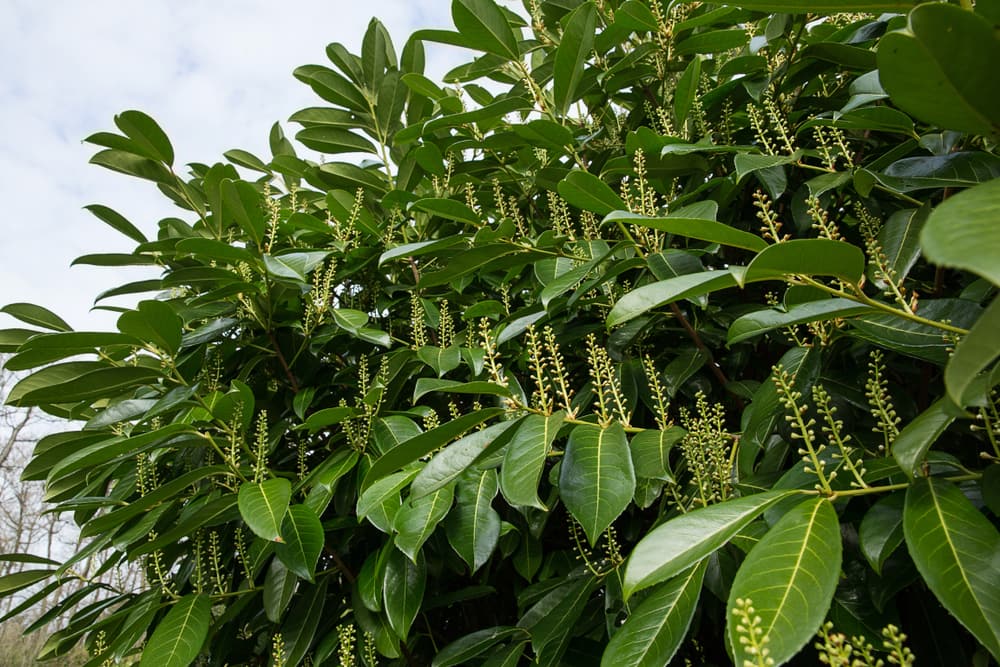 The cherry laurel can be grown as a privacy hedge or a shade tree since it can reach a height of 20 feet (6.09 meters). The plant can survive heavy pruning to be easily shaped to fit between driveways or alongside fences.

The flowers are white, and the tree has a strong scent that smells like cherries. Some may find the scent to be overwhelming. This tree is considered invasive on the Pacific coast. 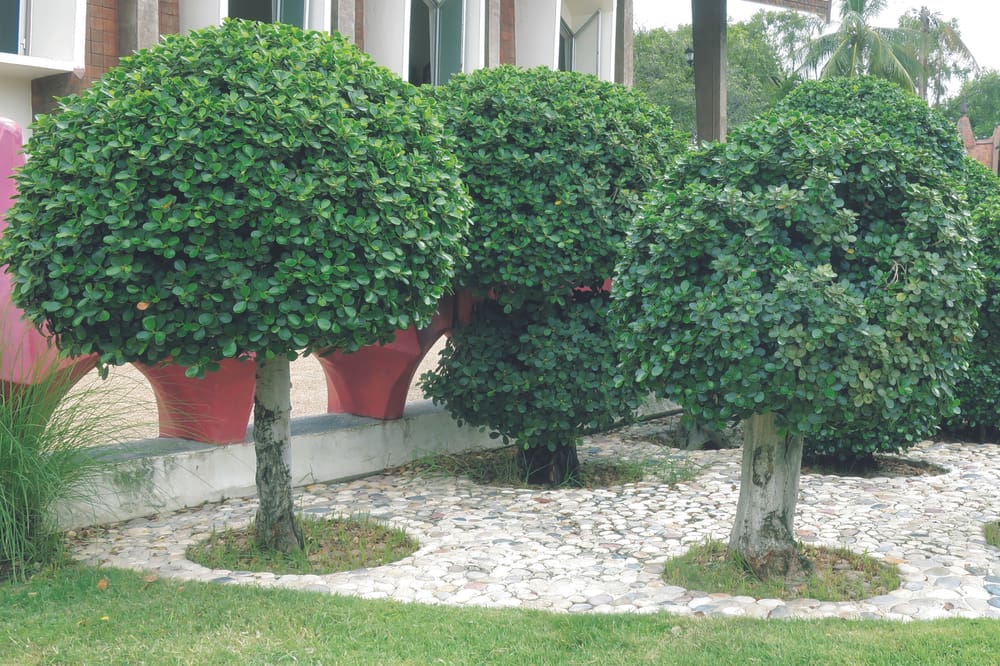 The Chinese banyan is another laurel imposter that's frequently called an Indian laurel. This tree is actually in the ficus family and is often used for bonsai, although it can grow up to 40 feet (12.19 meters) outdoors. The roots are mighty and destructive, making this plant undesirable in many parts of the world. 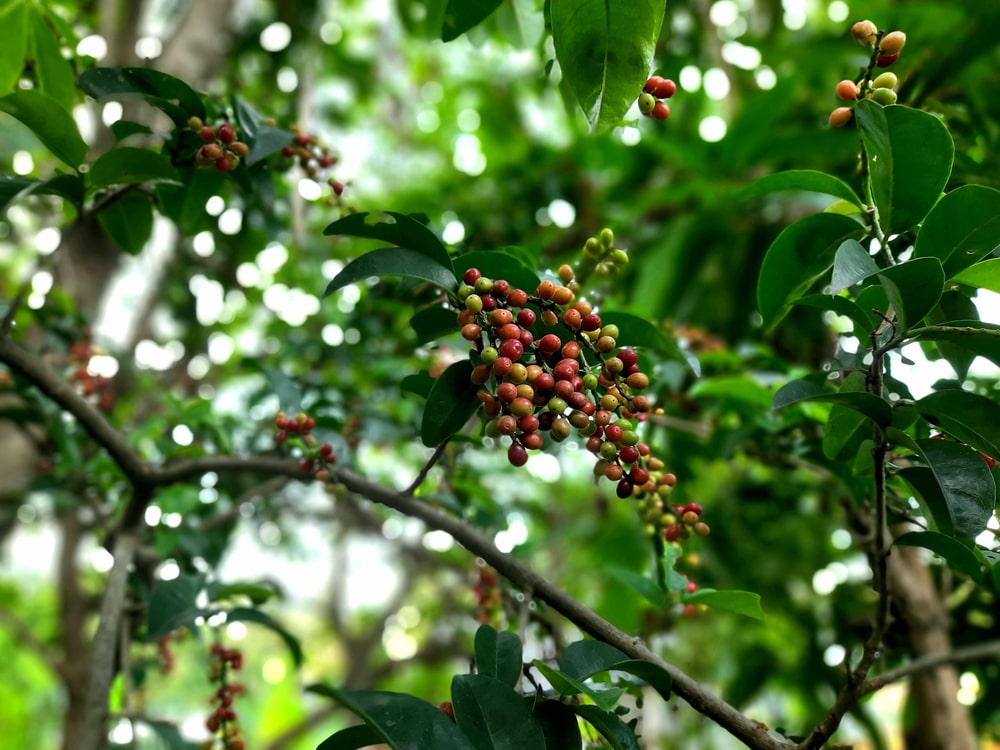 The Chinese laurel typically grows to be 26 feet (7.9 meters) tall, but it can reach much taller heights. The leaves are shiny instead of leathery, and it produces edible fruit. The tree may not be able to produce fruit in some climates. This tree is often used for medicinal purposes in Asia, such as treating snake bites. 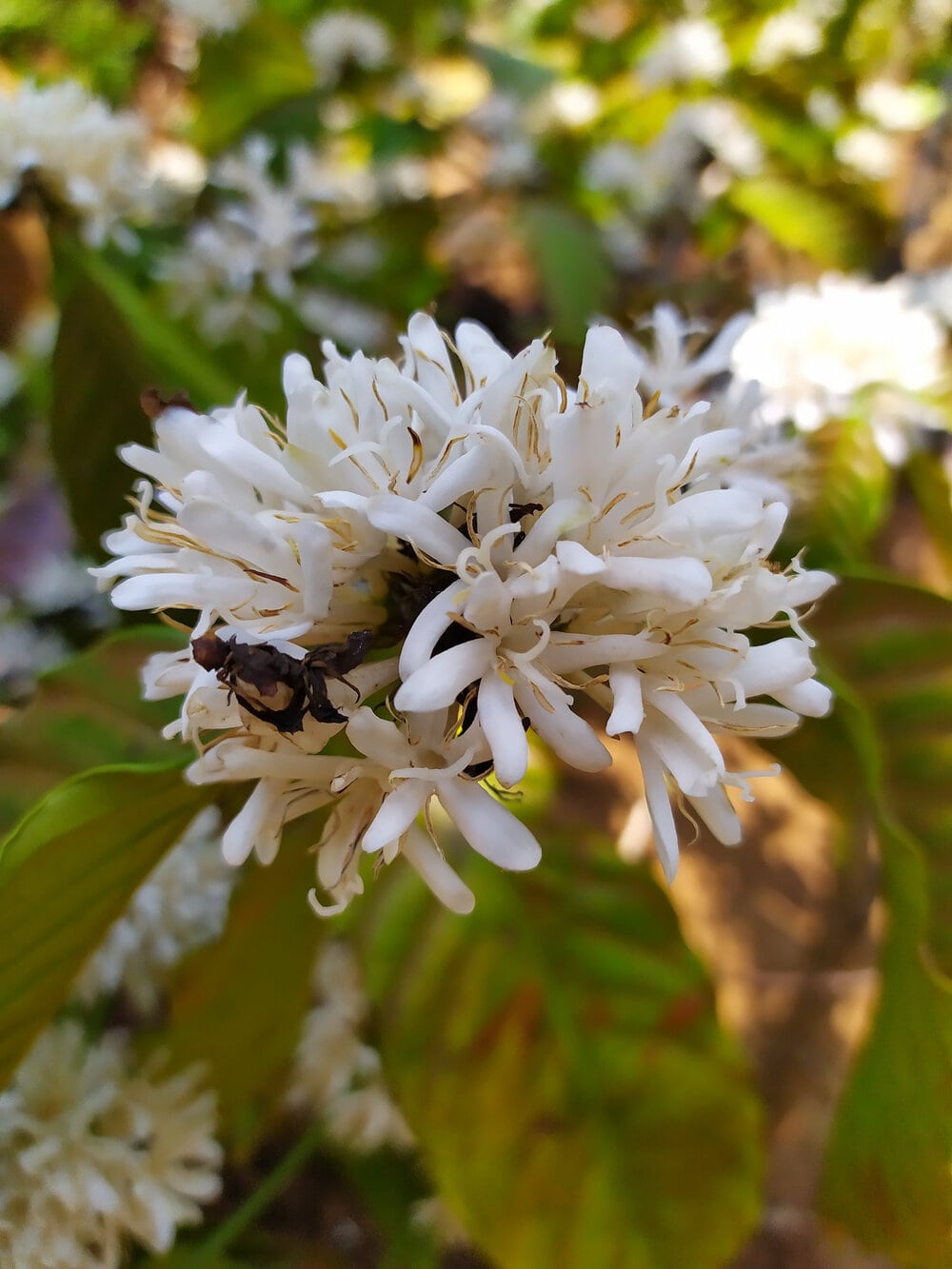 The Ecuador laurel prefers to grow in humid climates. It can reach up to 131 feet (40 meters) tall, although it will reach only half of that size in drier climates. The tree will grow clusters of white flowers and drop berries that will grow into new trees. This plant is considered invasive in some countries. 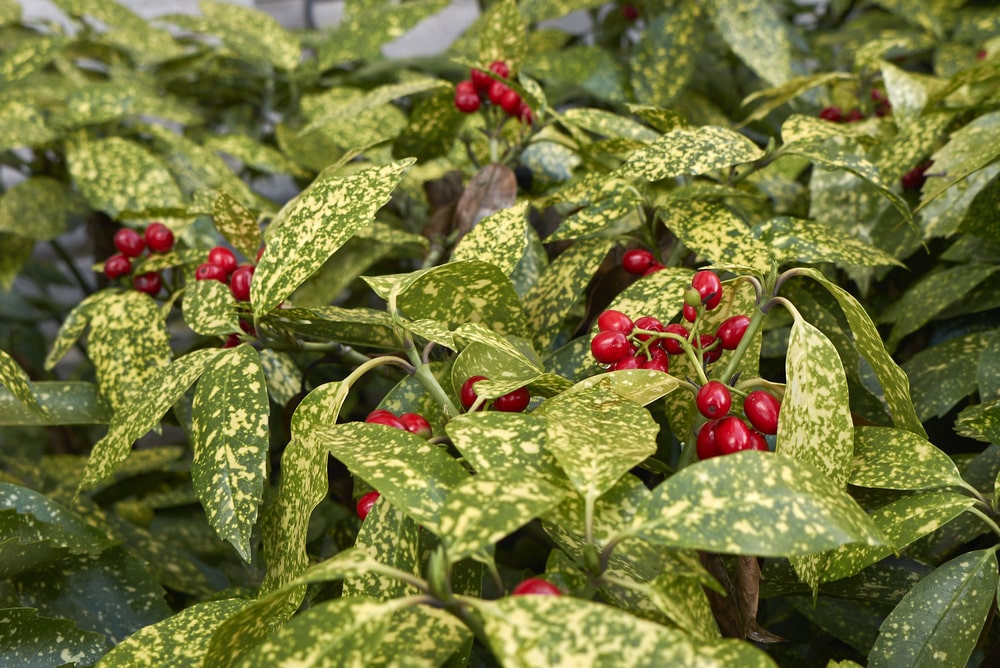 The Japanese laurel is a unique variety. Instead of solid leaves, its dark green leaves are splattered with yellow spots. The flowers they grow range from red to purple, followed by bright red berries that have beautiful contrast to the speckled leaves. This plant shouldn't reach more than 10 feet (3 meters) and grows best in woodland areas where water is readily available. 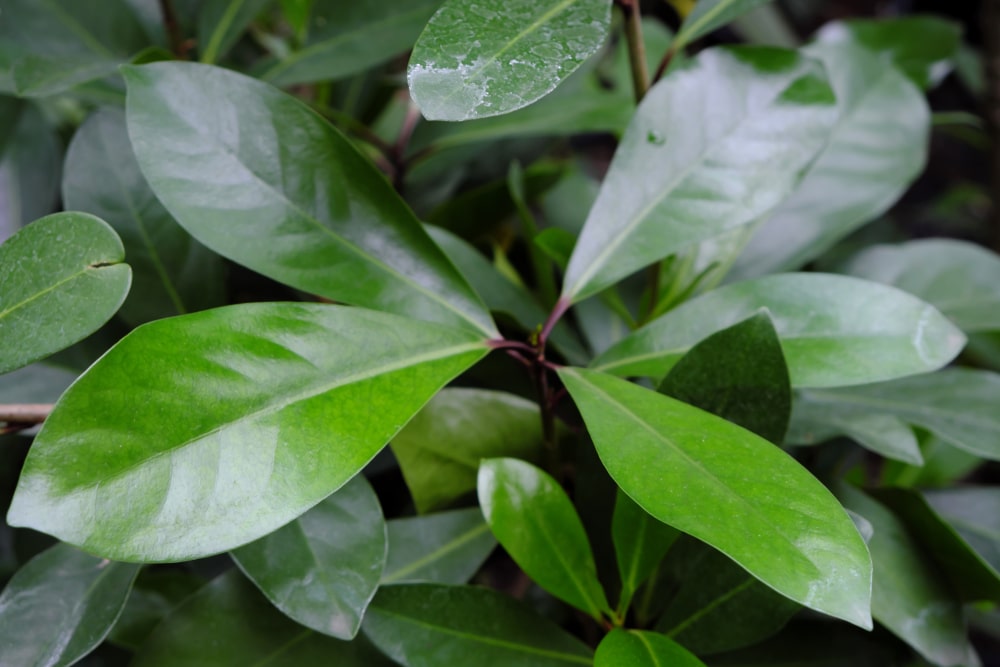 The Karaka tree is native to New Zealand. It grows in coastal forests, but it can sometimes be found away from water. It has leathery green leaves, which are typical of laurel, but it produces edible orange fruits. The clusters of flowers range from creamy white to light green. The tree can reach up to 49 feet (15 meters), although it likely won't reach that size when grown out of its preferred climate. 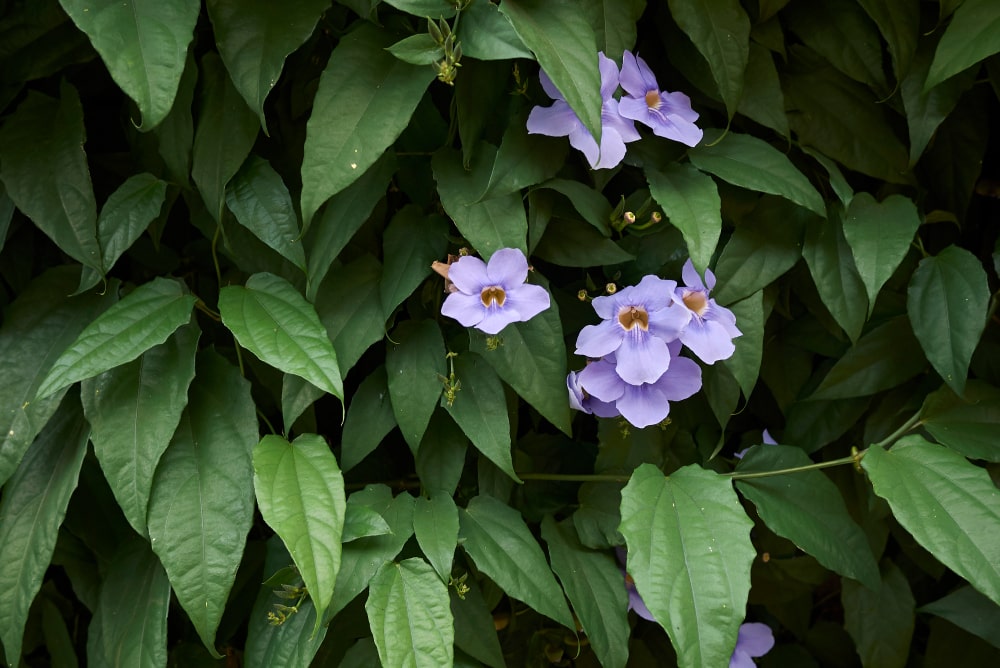 Laurel clock vine's scientific name is Thunbergia laurifolia. The name suggests that it's a laurel, but it's actually not. It was given its name laurifolia because of its laurel-shaped leaves, which is why it's often mistaken as a laurel. This plant is a vining plant that grows small purple flowers. It's native to tropical regions in Asia but may be invasive in other areas. It's often used for medicinal purposes. 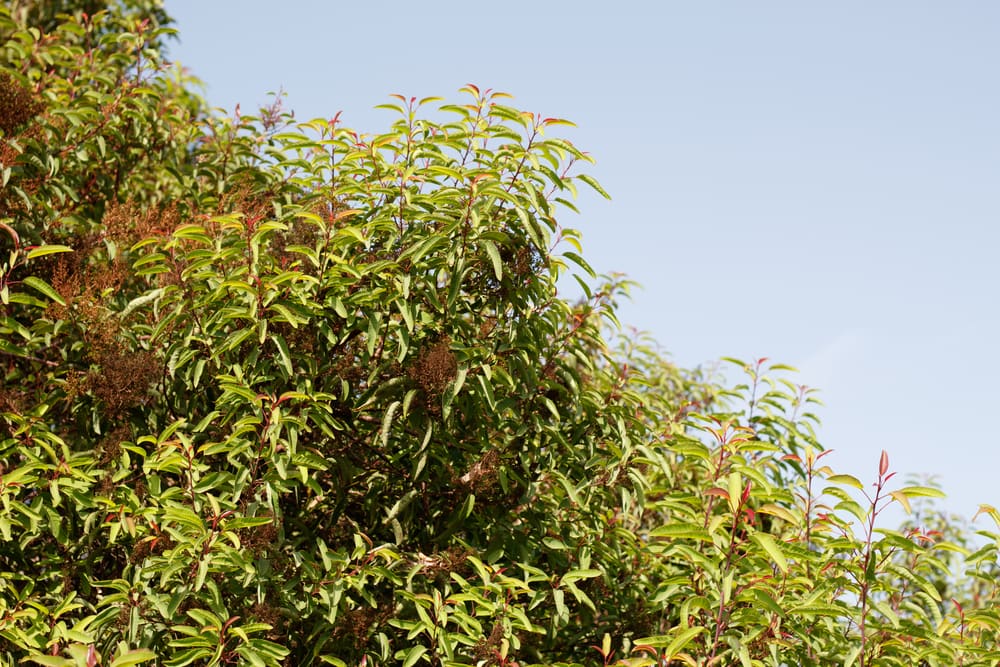 The laurel sumac can be found on the Pacific coast in the United States and Mexico. The plant can reach up to 16 feet (5 meters), although it will likely be smaller outside its native climate. This laurel can't tolerate cold temperatures and will die if it's left in the frost. 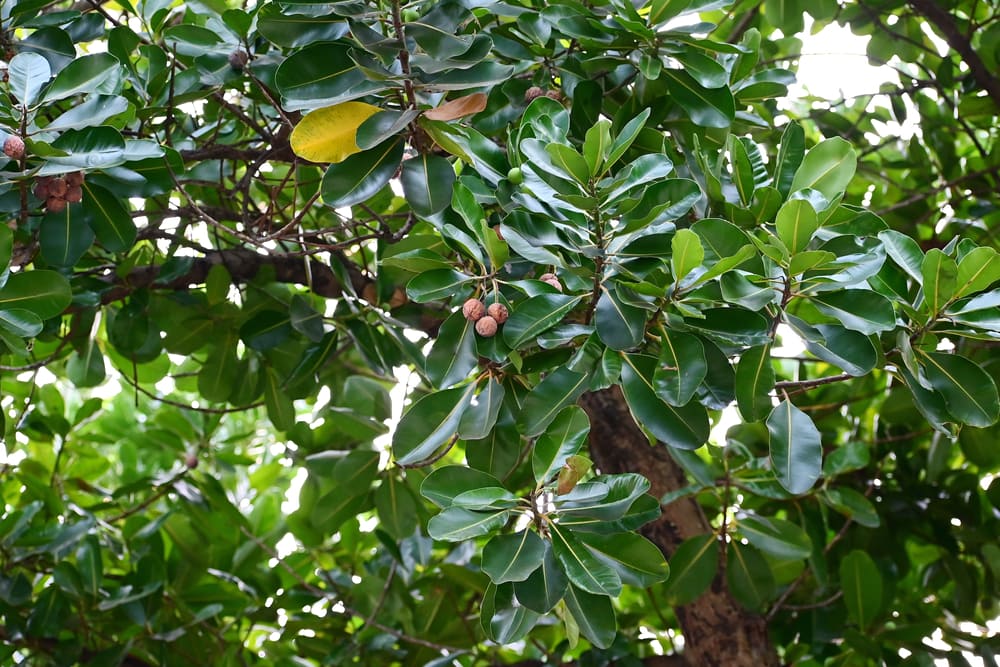 Eastwood's are large trees that are native from eastern Africa, Australia, Southern India, and Malaysia. In its native countries, the tree can reach up to 50 feet (15.24 meters) tall and can grow up to 2 feet (60.96 centimeters) per year. Outside of these countries, many people like to grow these trees as decorative container trees or prune them to be privacy hedges. The flowers are white, and the tree is pleasantly fragrant. 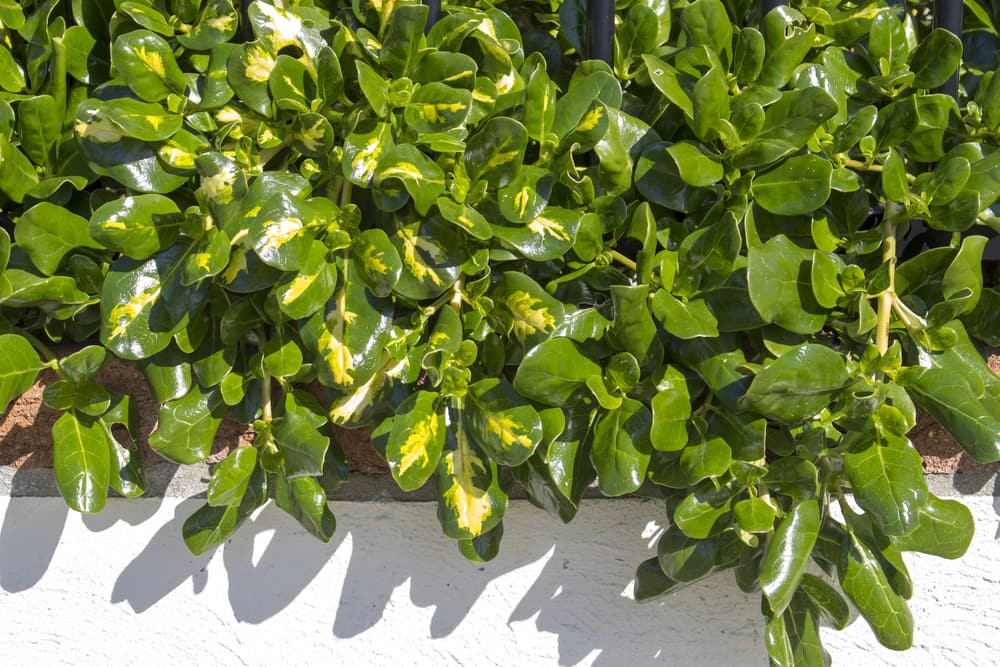 The mirror bush has become a favorable hedge in suburban areas. It grows quickly and can adapt to almost any climate. The plant has green leaves that are incredibly glossy, which is how it got its nickname.

The mirror bush comes in many variegated forms with leaf colors that are white, pink, yellow, or purple. The plant can grow up to 10 feet (3.04 meters), but smaller varieties only reach 3 feet (0.91 meters). 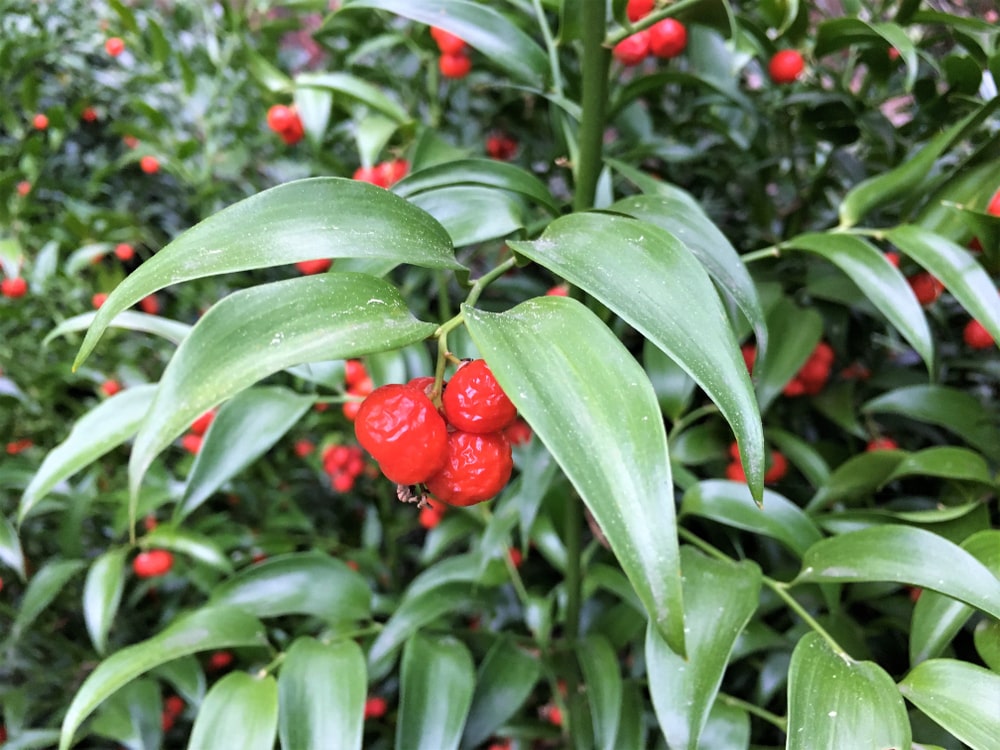 Poet's laurel resembles bamboo with its thin branches and rhizomes. It has glossy leaves and stems and produces red-orange berries in the fall. This plant prefers plenty of shade, so it's best suited under a tree. Once the plant is established, it can adapt to become drought tolerant. 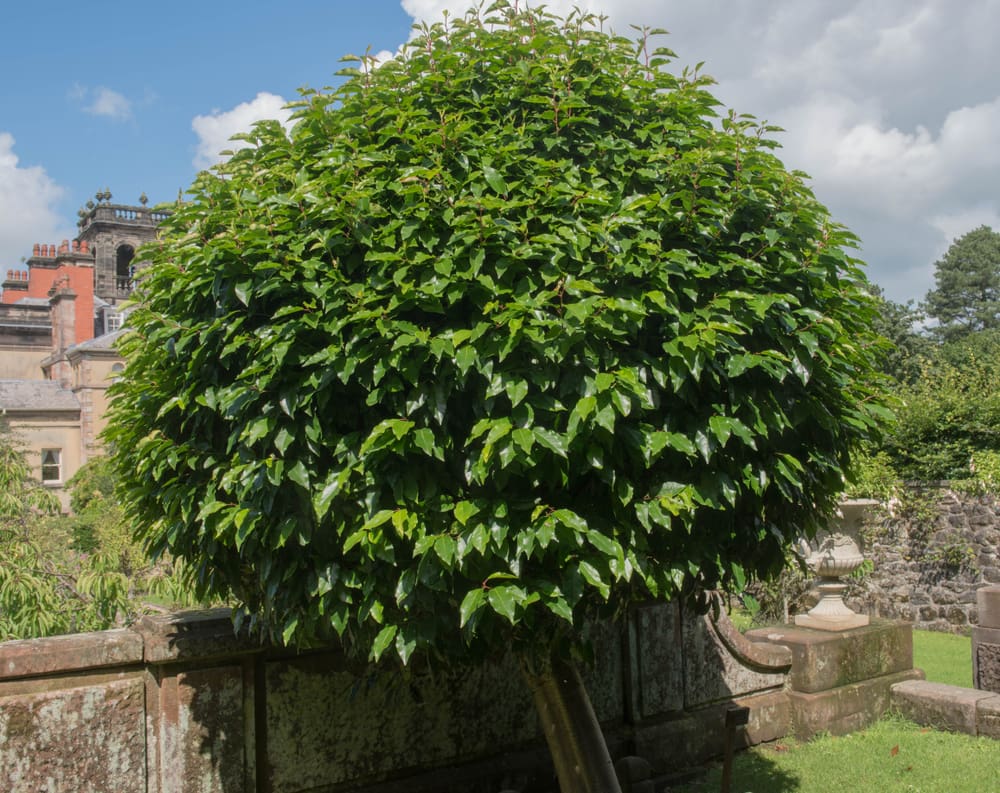 The Portuguese Laurel is native to Portuguese and Spain. It's typically grown as a shrub, but it can grow tall enough to be shaped like a tree. This laurel can even be severely pruned and shaped as a topiary.

It prefers moist soil when it's young can be adapted to be drought tolerant once it's established. This fragrant plant grows white flowers and purple berries. 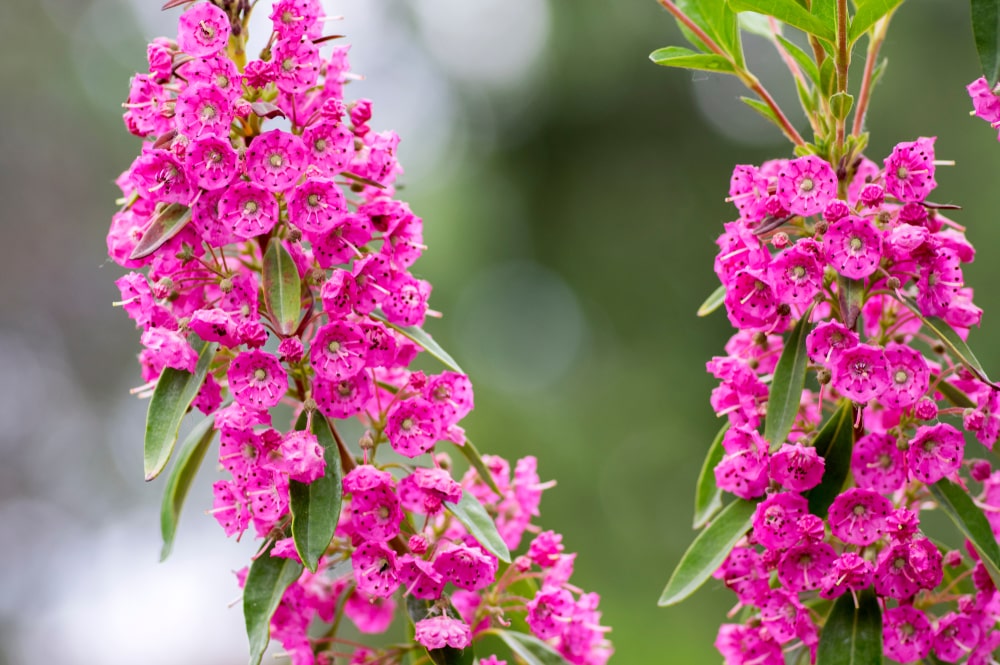 Sheep laurel is another faux laurel that's related to bog laurel and is native to northeastern North America. It's a versatile plant that can be found in northern Quebec and as far south as Georgia.

It prefers cool and wet climates, although it may be able to adapt to somewhat warmer climates. It has clusters of bright pink flowers similar to bog laurel. 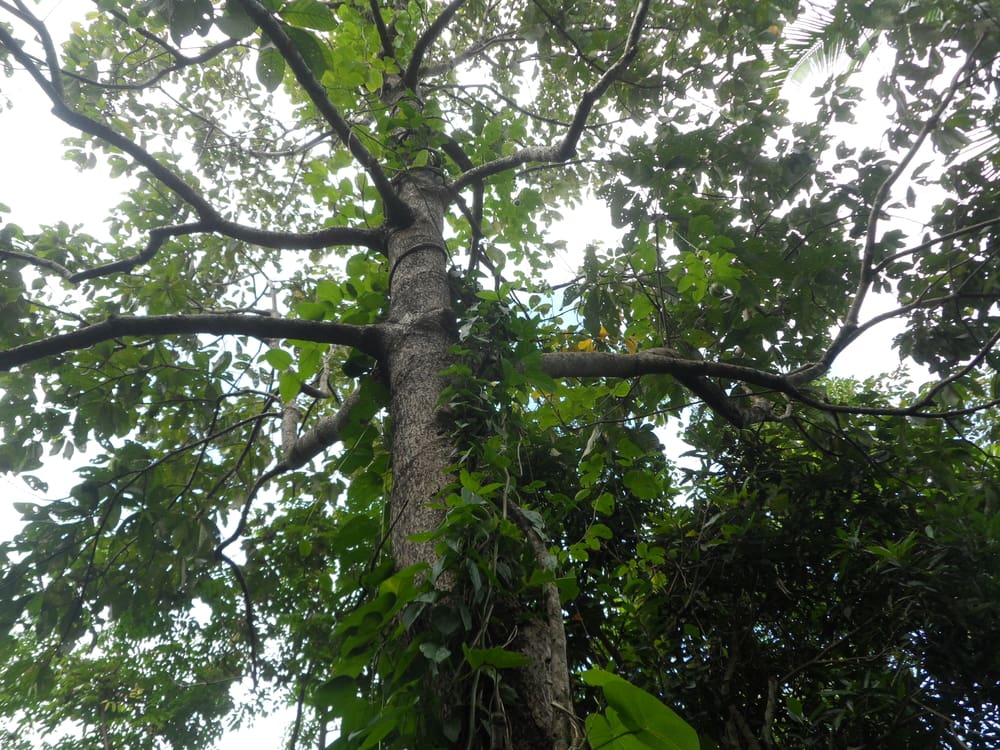 Soft Bollygum is also known as Indian laurel. It's native to India and neighboring countries as well as Australia. It's considered an invasive tree in South Africa and a few other countries, although it's not considered a global problem.

The tree bark is pale brown or grey and can be slimy, with branches that are thin and appear to be hairy. The berries it produces are purple, and it has yellow-green flowers. 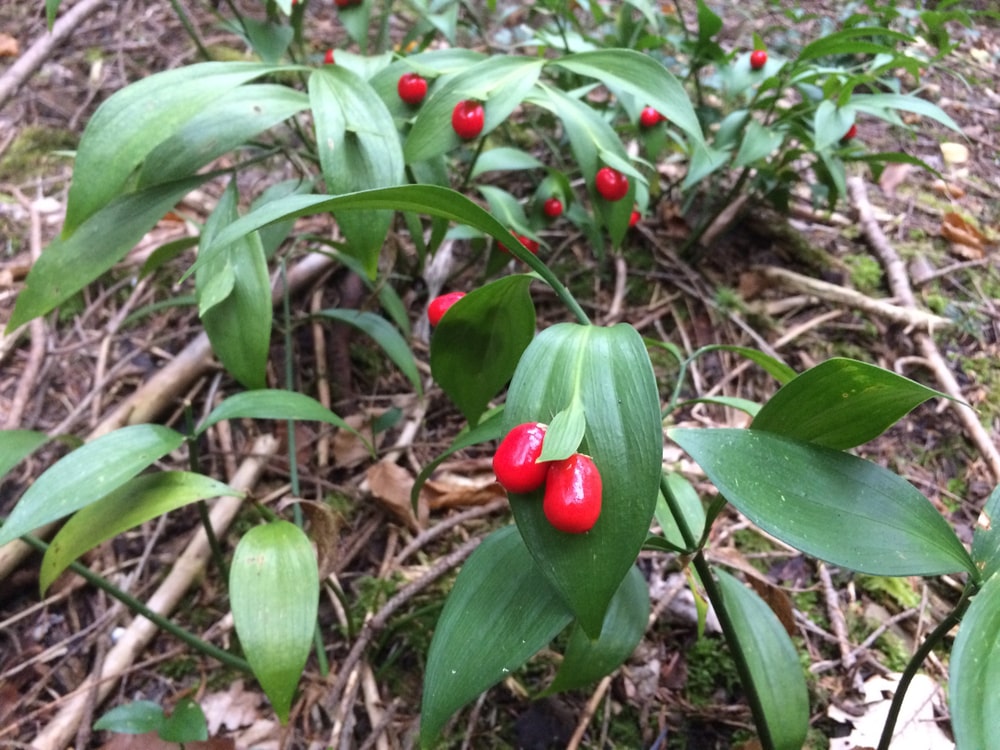 Butcher's broom is a small shrub native to Europe. It has dark green leaves and bright red berries, making it an eye-catching shrub to plant in gardens or floral arrangements. It only grows to be about 3 feet tall (91 centimeters).

The spineless variety doesn't have pointy spines on the ends of each leaf like other butcher's broom varieties do. This plant can live in almost any climate as long as it's shaded. 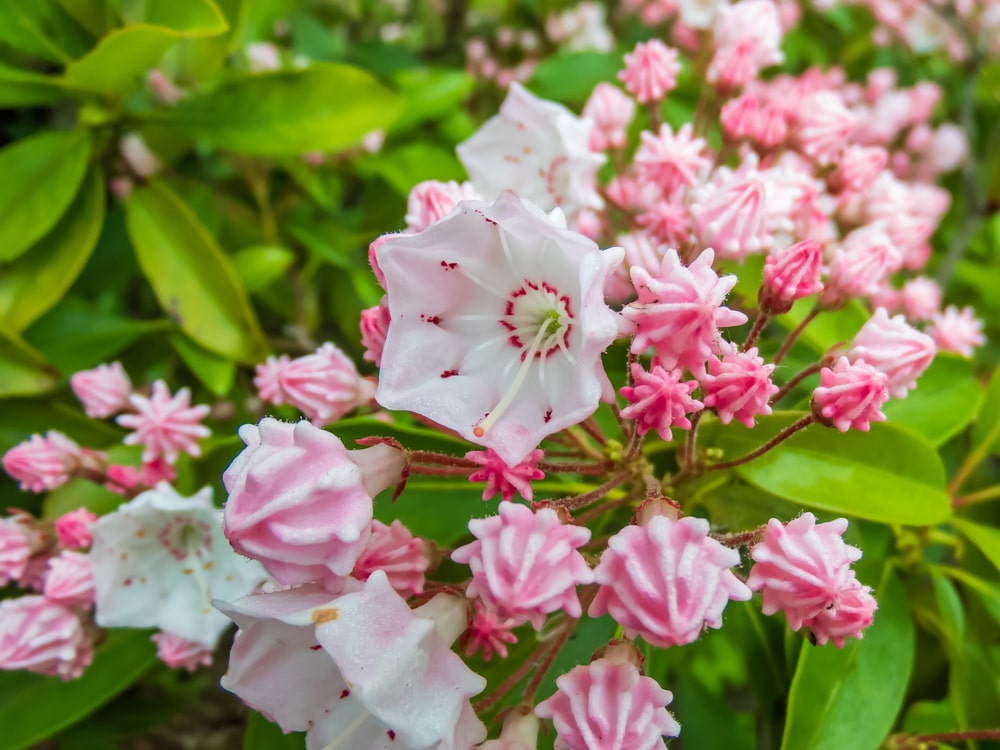 Spoonwood is in the same family of bog laurel and sheep laurel, which means it's not actually a true laurel. It typically grows as a low shrub, may occasionally take on the shape of a small tree. It's native to the eastern parts of North America but can be also be found in Louisiana. It grows multicolored flowers with red, pink, and white. 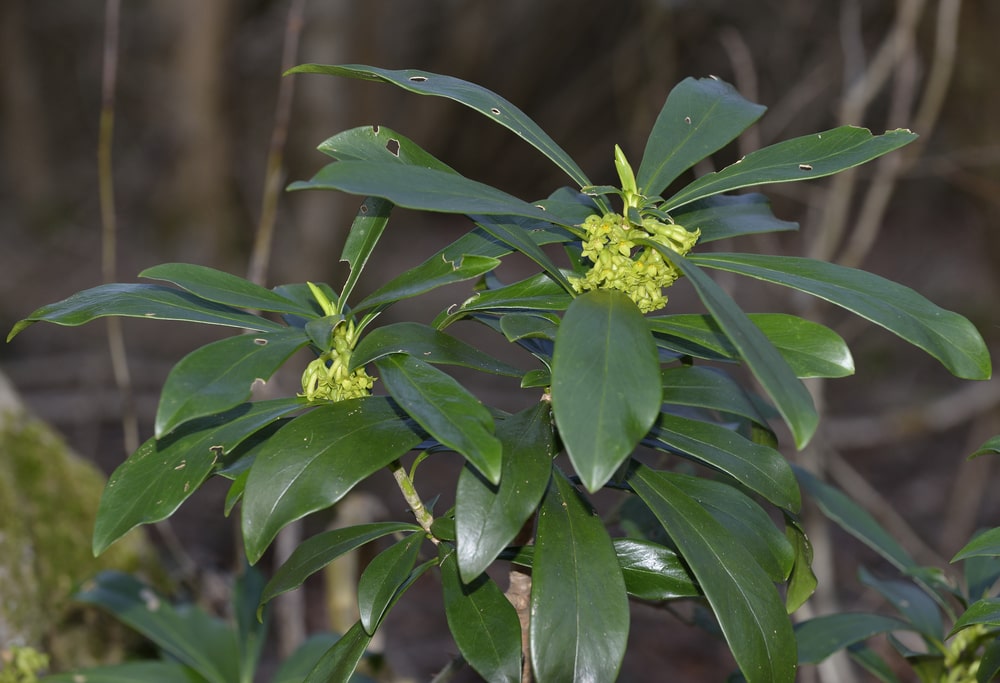 Spurge laurel is highly adaptable to sun and shade, although it grows best when it receives sun and shade. It has yellow-green flowers and a strong fragrance. The flowers on this plant are slightly hidden under the long, oval leaves. This plant can grow up to 5 feet (1.5 meters) tall. 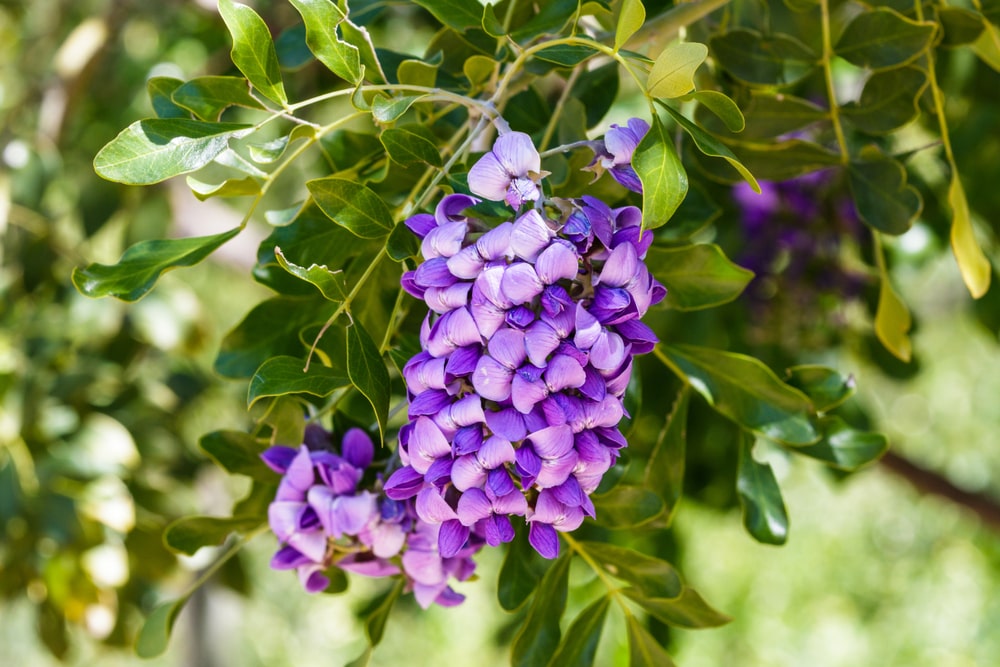 Texas Mountain Laurel is native to central Texas and can be found as far west as New Mexico and as far south as central Mexico. It can be grown as a shrub or a small tree and can be pruned to be a privacy hedge.

It can grow up to 30 feet (9.14 meters) tall if it's given a lot of water, but it's often seen as a short tree because it's native to areas prone to drought. Clusters of purple flowers grow in the spring, and their fragrance can be smelled even if you're standing away from the plant.