There's something about cooking and eating outdoors that we find so appealing. Going back to your primal roots and cooking on an open flame, combined With the fresh air, makes us feel at peace. These gorgeous outdoor kitchen designs will spark your imagination and have you yearning for outdoor cooking, eating and entertaining area of your own. 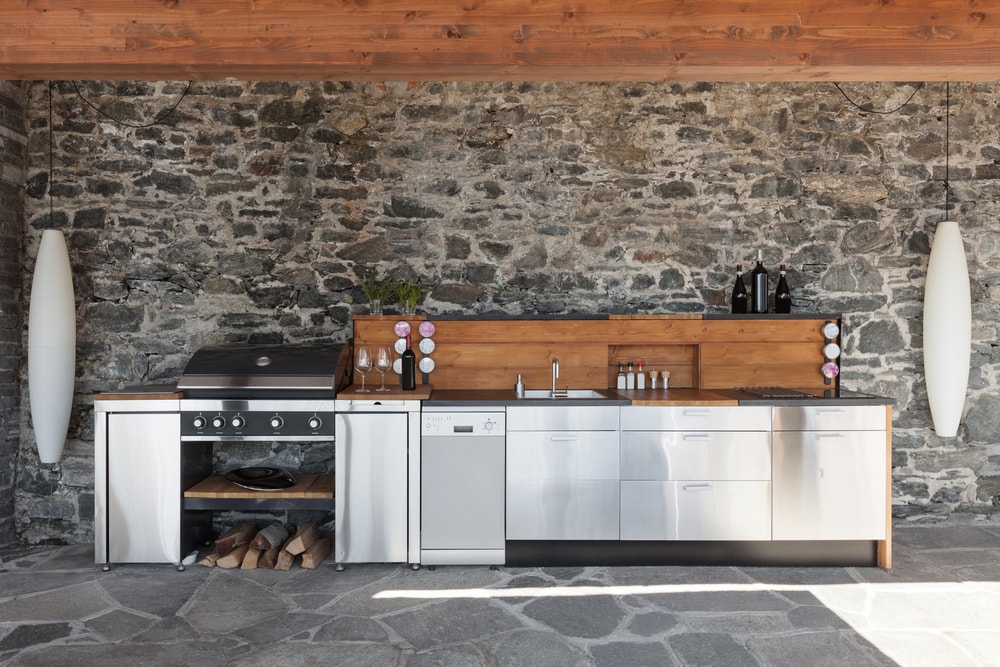 Low hanging lamps add interest while the ultra-modern steel blends seamlessly between the kitchen and grill. Adding in a dishwasher makes this into a complete kitchen rather than just a cook area. 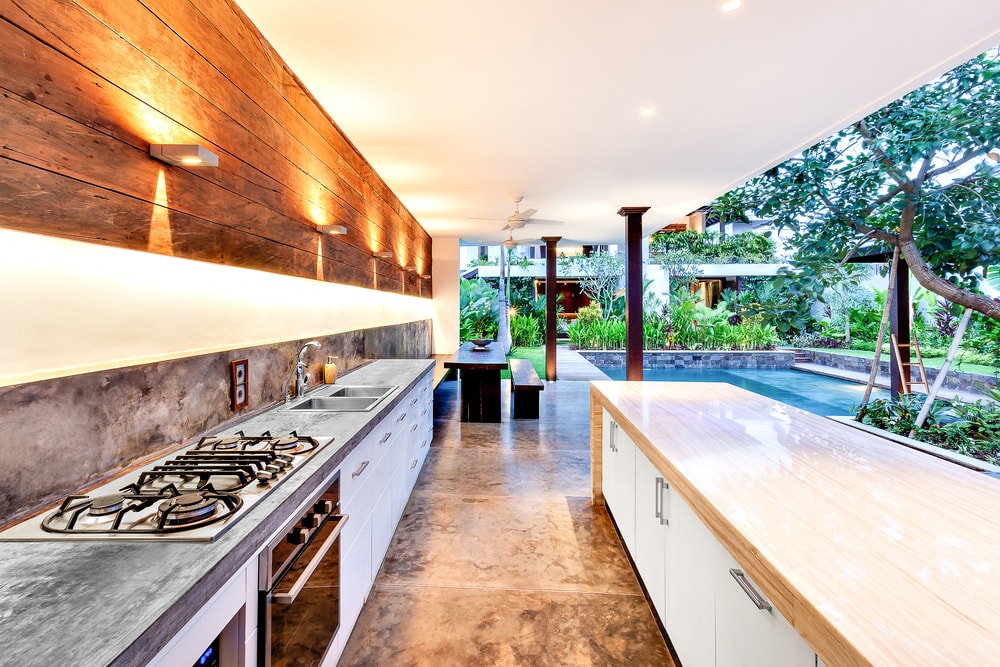 Clever lighting and kickboards make this seem almost rustic, while the sleek and expensive marble complements it and brings this into a much more rounded design. The huge kitchen area with oven and burners is a real kitchen rather than grill area. 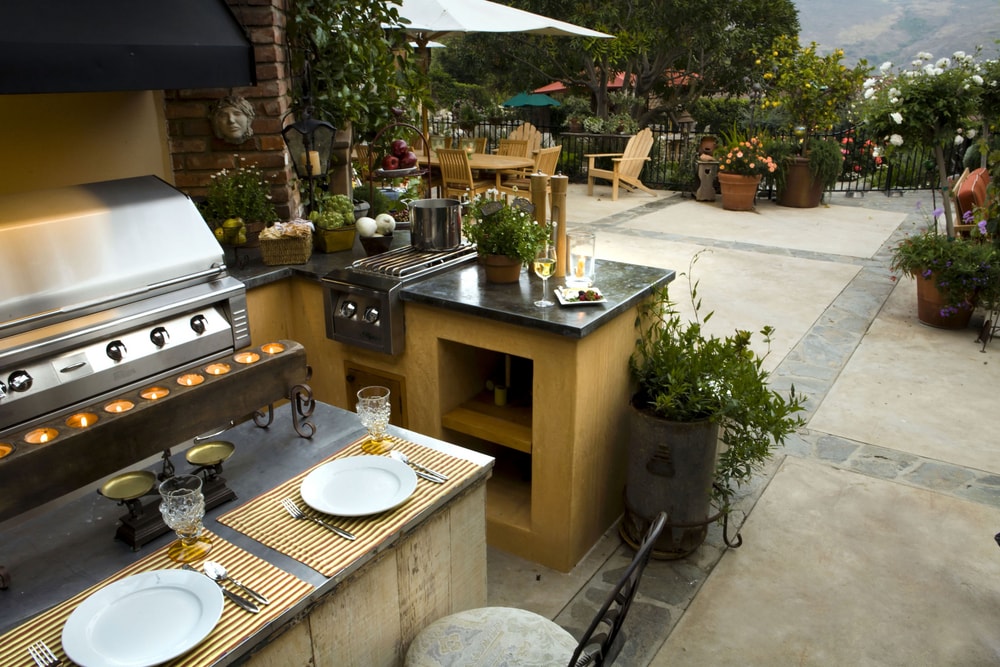 A full area with bar, cooking facilities and seating. There's a lot going on for such a small space. The cooking area also doubles as a grilling space and there's ample storage under the bar. 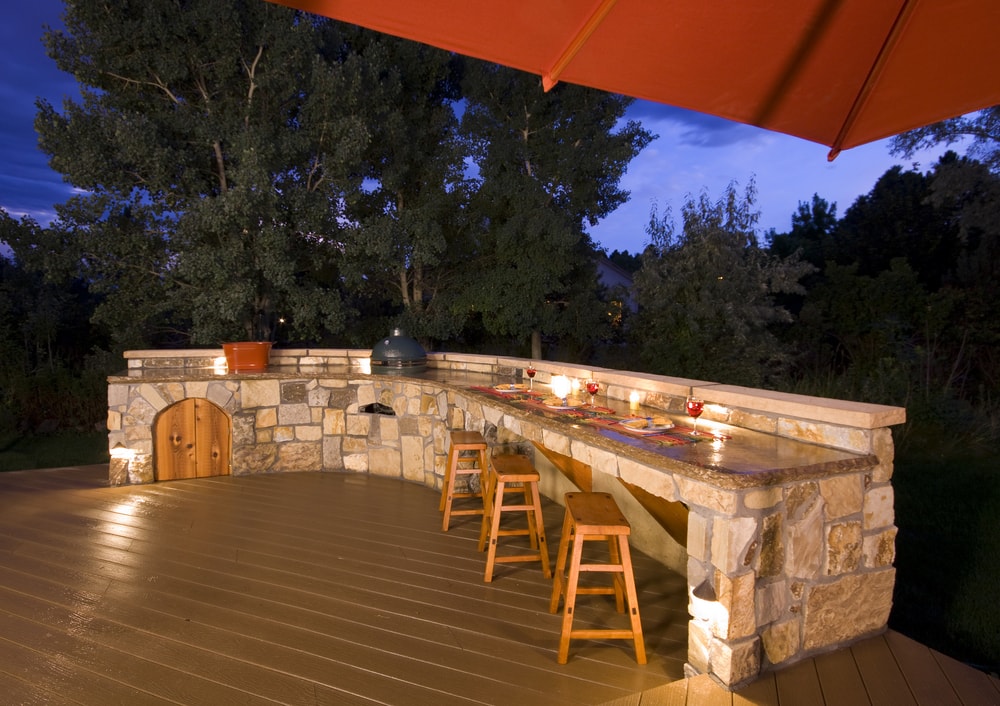 A simple cooking and eating area that has a built-in grill and storage. While there's not a lot of amenities it's functional. 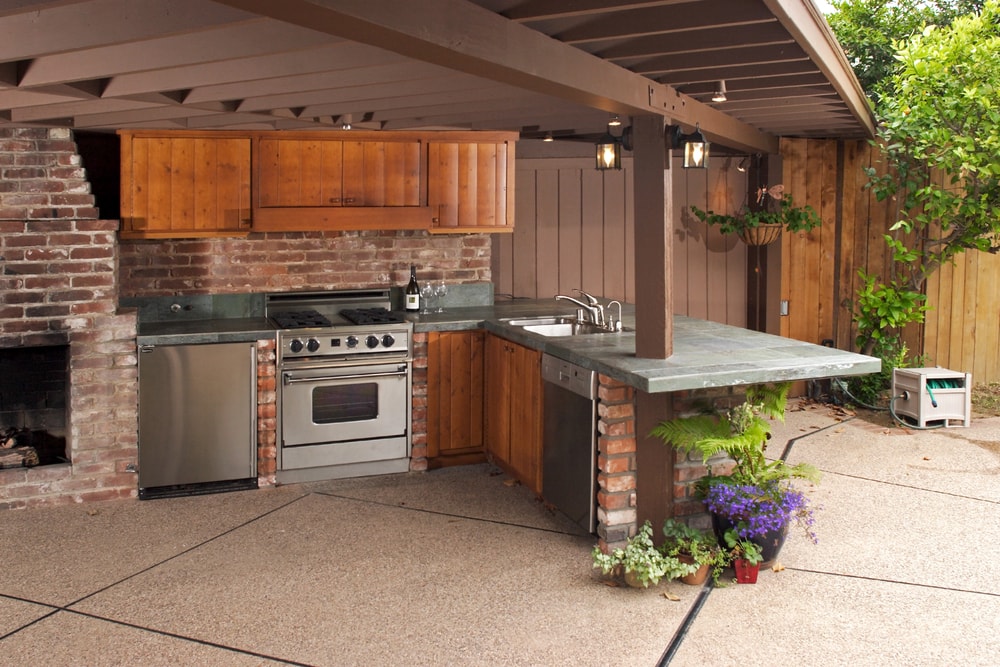 This is a true outdoor kitchen with everything from a fridge to a dishwasher as well as a roaring fireplace nearby and plenty of storage. There's also a bar extending from the cooking area so you can have company and plenty of space to add a table behind.

An impressive array of kitchen equipment in classy stainless steel. The covered area keeps the sun off while you're cooking and the simple bar is perfect for serving as you go.

A small and well-packed kitchen area that has storage drawers matching the stainless appliances. The grill dominates the design, leaving little space for much else aside from a fridge and taps. The gray granite compliments the steel and matches the sleek modern building.

A raised kitchen area makes it more of an experience. The fireplace can be used to keep food warm while the grill takes up most of the cooking space. Limited storage but ample surface area make this functional without being overly ‘gadgeted'.

Another steel design that focuses on gadgets. This is missing the sink but also has a small wood burning warmer at the end. Bar stools mean you'll have company while you cook and can even serve straight in the kitchen.

This small kitchen is super functional and with everything being in tones of gray it matches well. At this size, it doesn't intrude too much on the garden, and small green accents help to tie the two spaces together.

An impressive use of what would otherwise probably just be more storage. The stairs to join both stories together means that you're not using up deck space upstairs and aren't being forced to stare at the kitchen if you are on the deck.

A modern and Scandinavian feeling design. The built-in grill dominates and there's also a small dishwasher and fridge. The bar style seating means you can dish food up instantly and still socialize.

A simple kitchen with no adornments, it seems a little bland and sad. Jazz it up with some colorful accessories and towels.

The perfect kitchen to appreciate the unobstructed view. Keeping everything low profile and minimal without a lot of decoration keeps the view the focus.

A kitchen that doesn't seem outdoor at all! The television, impressive wood-fired cooking area, smoker, and rotisserie is built for some serious cooking. The ferns add a nice touch of green too.

A simple kitchen that also focuses on the view. The tables have a useful lazy susan feature to make them more functional and the kitchen area has the basic grill facilities only.

Another small kitchen which focused on gadgets. There's a fridge, grill and more going on under the counters while the actual cooking area is pretty small and limited to the single function bar.

Fun back tiles add interest and a rather unusual center table helps maximize the cooking space. This has loads of storage and space for herb planters at the back help keep the garden feel.

Having the kitchen on a lower level than the patio and pool helps prevent having an obstructed view. The simple setup has a stove rather than a grill and lots of storage.

Rather than a full kitchen, this is an area made for socializing and eating rather than cooking. The cooking area is just enough to hold a grill and dishwasher with really no cooking space at all.

A simple outdoor kitchen that has a grill, washer, and dishwasher. It's bland and gray and could use some fun accents to brighten it up. The chairs are also just shoved at the end of the bar, though there's room for more.

A dining area as well as a kitchen, there's a clever extractor fan above the grill so that smoke doesn't get caught against the building and make it miserable to cook.

An impressive canopy shades this grill from harsh sunlight while the focus on the grill and fridge means this is perfect for quick, functional cooking without fuss. No need to worry about anyone bothering you while you cook since there's little room for guests. 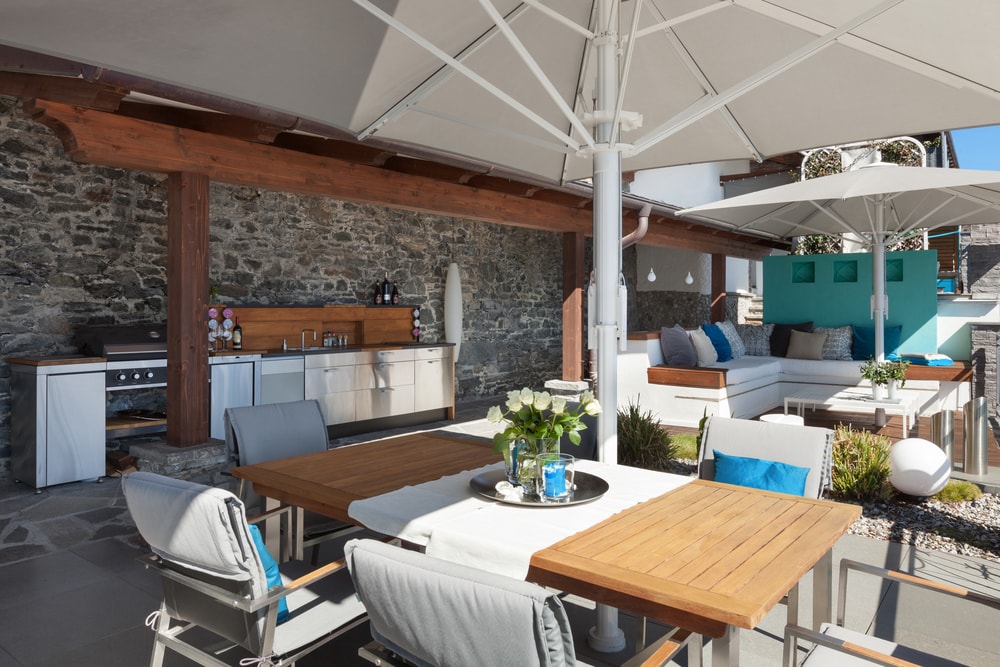 An indoor-outdoor room that has removable umbrellas as shade rather than an actual canopy. The kitchen area is simple, but it's also rather enclosed so this could be miserably smoky from the grill being tucked in the back.

With a semi-circular kitchen, it feels self-enclosed without being cut off. The grill takes focus and the double counter area means plenty of space for food and socializing. The wood fireplace in the background is a nice feature too.

An impressive kitchen that has a large wood fireplace and a huge grill. The seating areas mean you've got plenty of room to socialize while the impressive grill takes up most of the cooking area.

A rather brutalist design that has stark concrete and just a grill. It's not fussy and it's simple. The main seating area is nearby rather than on top of it so that you won't get smoked out while cooking.