Lettuce is one of the most commonly cultivated crops grown by home gardeners. It’s easy to start from seed, no matter which of the dozens of varieties you choose to grow.

However, one question is common when sowing seeds: how many lettuce seeds should be planted per hole?

Even though you may see it frequently recommended to sow two to three per planting hole, my experience is slightly different.

When I’m starting with a purchased seed, I know that some seeds may not sprout, and I may plant two to three in each cell or pot to compensate for this.

Since I often collect seeds from my own garden each year, I’m more confident that the seed is fresh and viable, and that it has been stored properly. In this case, I generally plant one to two seeds per hole or cell.

I prefer to improve the likelihood of germination rather than wasting seeds, and I’m going to share why along with the steps I take to achieve this.

Check out our guide on the best way to grow lettuce and the answer to the question “how many lettuce seeds per hole?”

What You Need to Know About Improving Germination Rates 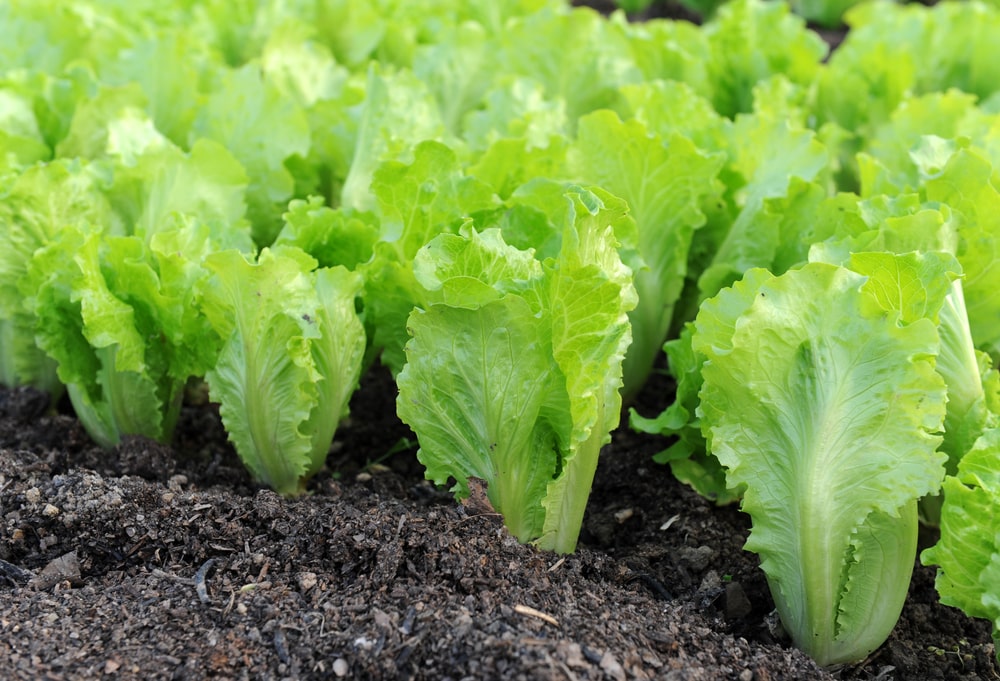 The first and most important thing to know about lettuce is that it’s a delicate crop.

Let’s start by discussing some actions you can take, and what ideal conditions look like, for the best germination rates. Taking these steps can reduce the need to plant multiple lettuce seeds per hole.

It can be tricky to know if the seeds you purchase are in good condition.

They may have been stored improperly in a hot warehouse or remained in their packet for a long time. Exposure to humidity can also lead to mold and fungus growth that isn’t readily visible.

Lettuce seed is also known to potentially carry viruses. Any of these situations can lead to low germination rates, but there are ways to prevent some of them.

According to Louisiana State University, seed sanitation is an important step that you can take to improve your germination rate and have a healthy crop.

Before you plant, pour about one cup of warmed water into a bowl or cup and add a teaspoon of bleach. Add the lettuce seeds and allow them to soak for about 20 to 30 minutes to kill any spores but be aware that bleach won’t kill the spores inside the seed coat.

Afterward, remove them from the solution and rinse them thoroughly to remove all traces of bleach. There’s no need to let them dry if you’re going to sow them right away.

If you are looking to start your own vegetable garden we recommend Mountain Valley Seed Company's multi organic/GMO-free pack, which includes both Lolla Rossa and Gourmet Mix lettuce seeds 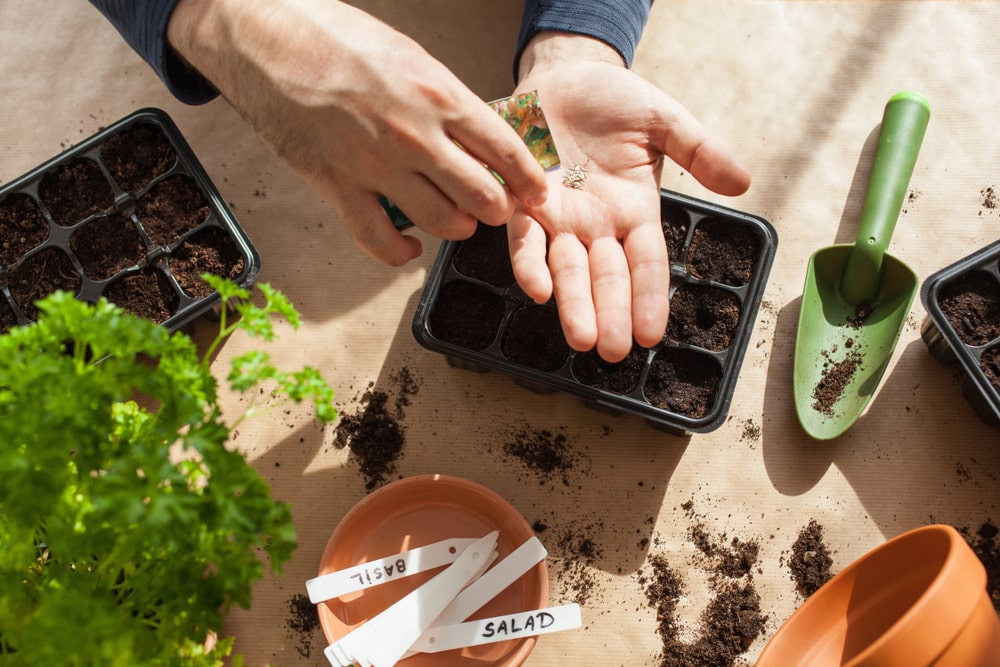 While the seeds are soaking, prepare the pots or cell trays that you’ll be using. One-inch cell trays are perfectly adequate for their small root system.

Use a mix of one part potting soil to one part well-rotted compost or manure. As you prepare the mix, add about half a cup of ground cinnamon and blend it well.

Cinnamon is a natural fungicide made from tree bark, and according to Springer, it can kill fungus in the soil. This is important as fungus and mold can impair viability.

One of the most damaging issues lettuce seedlings can face is an illness called damping off, which is caused by fungus gnats that breed in the soil and feed on the tender roots. Treating with cinnamon can also help to prevent this. 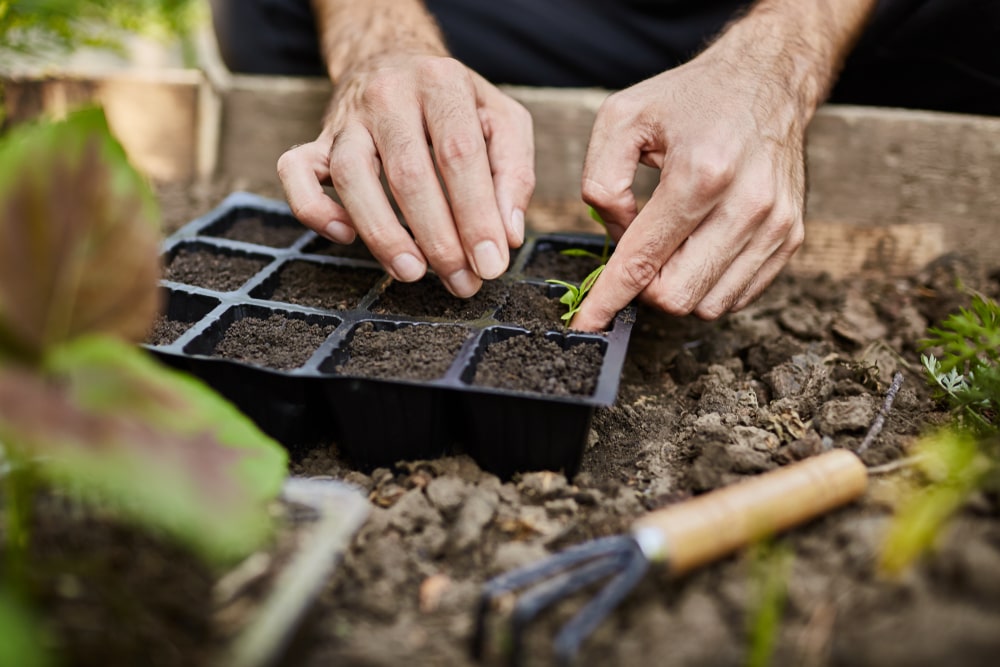 Add the potting mix to the cells and water it to moisten, making sure excess water drains off – the soil should feel just slightly damp.  Avoid overwatering as soggy soil can inhibit sprouting and lead to problems such as root rot and fungus growth.

The seeds need light to germinate, so place the tray in a location where temperatures are between 60 and 75ﹾF and they’ll receive at least six hours of indirect sunlight per day. A grow light can be used if you don’t have a sunny window.

How Many Lettuce Seeds Per Hole? 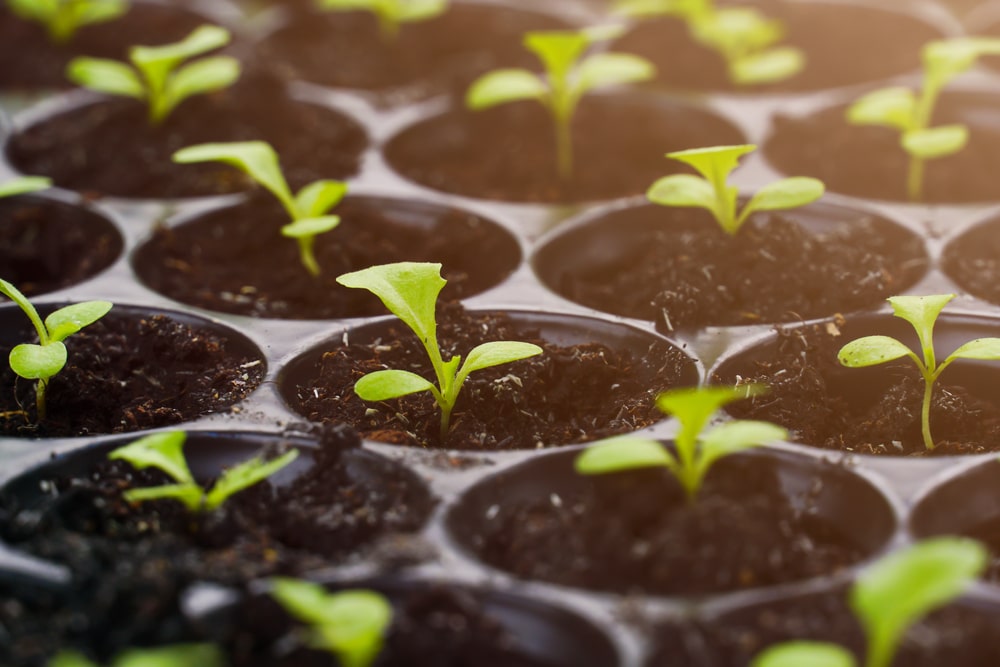 For purchased seeds, add two to each hole, but don’t bury them more than about one-eighth inch deep. When they sprout, trim out the weaker of the two and allow the stronger seedling to grow.

Seeds harvested from your garden should be planted one per hole in the same manner. Rather than wasting seeds, allow a week to 10 days for germination, and if any do not sprout, simply plant another seed in its place.

Lettuce seedlings grow extremely fast unlike some crops – the entire plant is usually ready for harvest in as little as 60 days, and the seedlings will be several inches tall within a couple of weeks.

This fast growth rate allows a short grace period for mistakes, so seeds that don’t sprout can easily be replanted without causing an issue through the overall growing season because they’ll quickly catch up.

You’ll likely be starting seeds indoors four to six weeks ahead of the last frost in your area so the seedlings will need to be hardened off prior to moving them permanently outdoors.

Allow one to two hours of exposure to the outdoors from a shady location for one to two days. Gradually move the plants further into the sunlight and leave them outside for longer periods over the course of about a week.

Once they’re accustomed to the outdoors, they can be transplanted to their permanent location.

If you are looking for a good fertilizer for your vegetable garden consider the AZOGEN 5-0-0 All-Natural Nitrogen Liquid Fertilizer. Which is suitable for both Indoor and Outdoor plants and flowers, also potted, Hydroponics, stems, roots and succulents.

There’s no need to waste lettuce seeds by planting several in each hole when they sprout and grow so quickly.

Unlike crops with a slower growth rate, such as tomatoes and peppers, it’s easy to simply start an extra seed or two as needed.

Improve your germination rate by taking these steps: