Sunflowers may seem like something you can’t grow unless you have a backyard because they can be so tall and sometimes require extra support to keep them standing. Fortunately, that’s not the case!

There are some cultivars and varieties of sunflowers called dwarf sunflowers that you can grow in a small area or even in a container. These types of sunflowers only grow to be a few feet tall and even shorter, making them great for those who have limited space.

Not only are dwarf sunflowers an excellent choice for small gardens, but they’re also great for cut flower arrangements. They won’t take up too much space in your garden, and they’re easy to harvest. No ladder required!

Let’s go over how to grow them so you can add a burst of sunshine to your balcony or flower bed.

What Is A Dwarf Sunflower?

A dwarf sunflower is a cultivar of sunflower that only grows to be up to 3-4 feet (0.9-1.2 meters) tall. Dwarf varieties grow taller when they’re on the ground, so they’ll be a little shorter in a container.

But this may be a bonus for you if you have limited space. Dwarf sunflowers are usually a hybrid of other sunflowers and are often pollen-free.

A dwarf sunflower is most commonly an annual variety, which means it completes its lifecycle in one year and won’t come back next year unless it drops seeds that will sprout in the spring.

Annual sunflowers have a deep taproot with small roots around them and will have one main stem, but they may have additional branches that grow smaller flower heads.

Some dwarf varieties are perennials, which can come back year after year as long as they’re grown in the proper conditions. They have creeping roots and tubers and several stems.

The flowers are generally smaller than those of annual varieties, but there are certainly exceptions to this rule.

If you’re interested in growing dwarf sunflowers but don’t know where to start, try some of these cultivars, all from the classic Helianthus annuus sunflower.

Dwarf sunflower care isn’t much different from how you take care of the full-sized varieties. They still need lots of suns, but the major difference is that if you keep them in a container, you’ll have to water them more frequently. 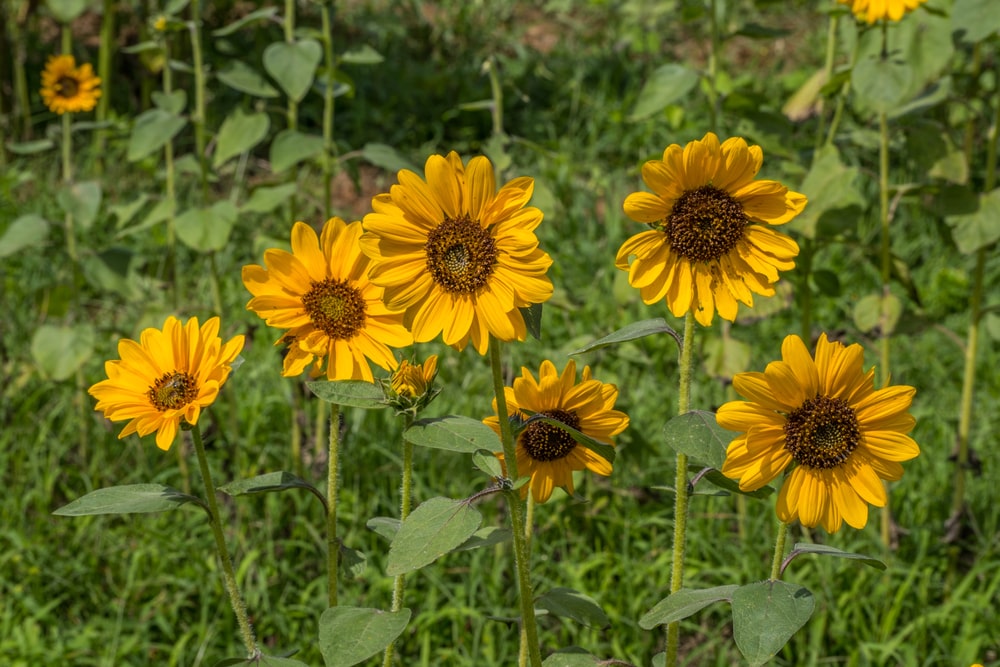 Dwarf sunflowers offer you a bit more flexibility when it comes to where you can plant them. If your living space can’t contain towering cultivars, the short ones will do just fine!

Since dwarf varieties only reach up to 4 feet tall, they’re less likely to need additional support to help them stand up, and they won’t cast as much shade over the rest of the garden.

So, you can plant them near your vegetables, by your house, or almost anywhere that gets plenty of sun.

The best part of dwarf sunflowers is that you can grow them in containers. The bigger container you can find, the better, but smaller varieties will tolerate smaller containers.

As a general rule of thumb, sunflowers that are 2 feet (61 centimeters) tall or less will need a container that’s about 12-inches (31 centimeters) in diameter.

Sunflowers that grow up to 4 feet (1.2 meters) will need at least a 3 gallon (11 liters) container, but larger will be better. If the container is large enough, you can plant more than one sunflower in it. 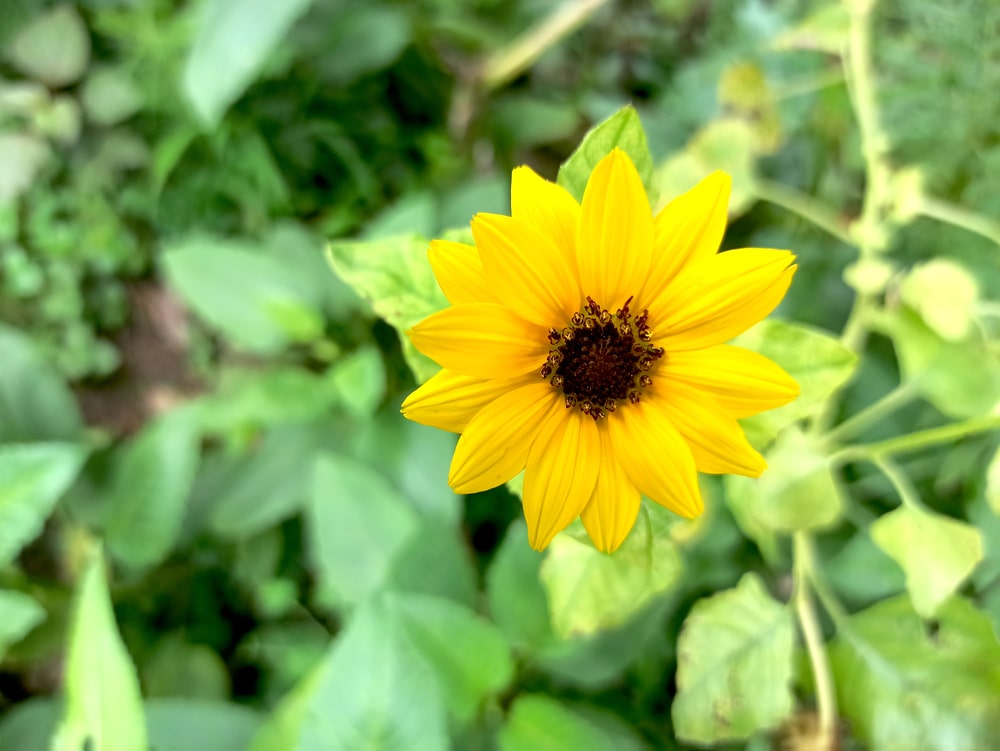 All varieties of Helianthus annuus require full sunlight, which is at least six hours each day. Depending on the variety you have, most sunflowers are ideal for USDA hardiness zones 2-11.

One of the benefits of growing dwarf sunflowers in containers is that you can move the pot around as needed to get the maximum amount of sunlight each day.

You can also bring the pot indoors during cold weather, so you can extend your growing season, too! 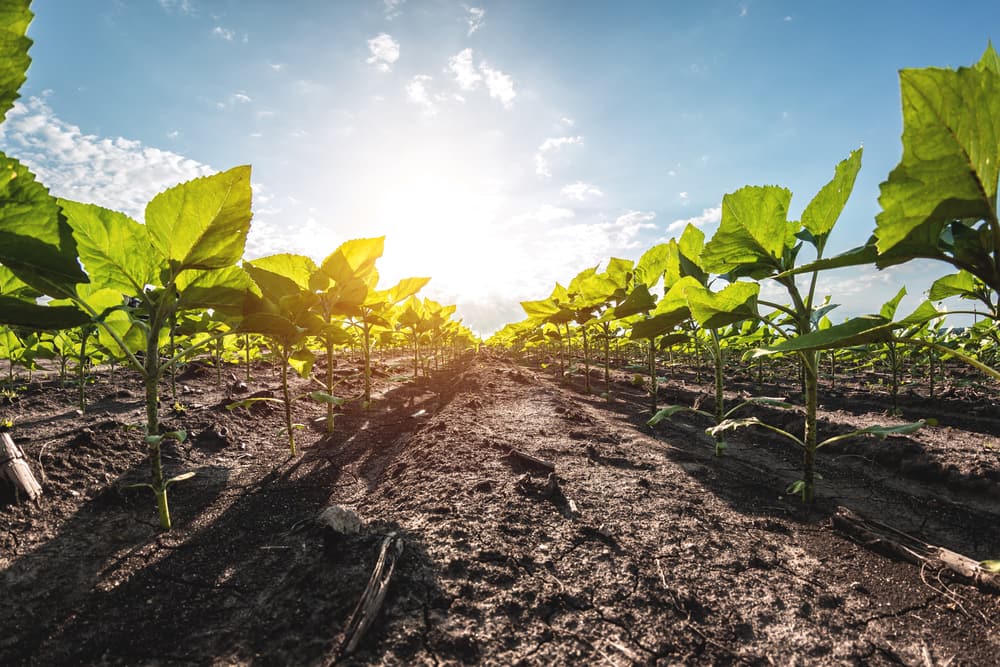 Dwarf sunflowers prefer soil on the alkaline level with a pH of 6.0-7.5, but they can tolerate a bit of acidity if necessary.

Sunflowers require plenty of nutrients, but dwarf varieties won’t need as much as 12-foot tall giant varieties, so you won’t have to use as much fertilizer.

To give your sunflowers a good head start, give them soil with lots of organic matter like decaying leaves or compost. You can top them off with more compost or use a slow-release fertilizer as they grow.

Nitrogen will cause the plant to focus on growing foliage rather than flowers, so you may want to opt for a fertilizer that’s low in nitrogen. 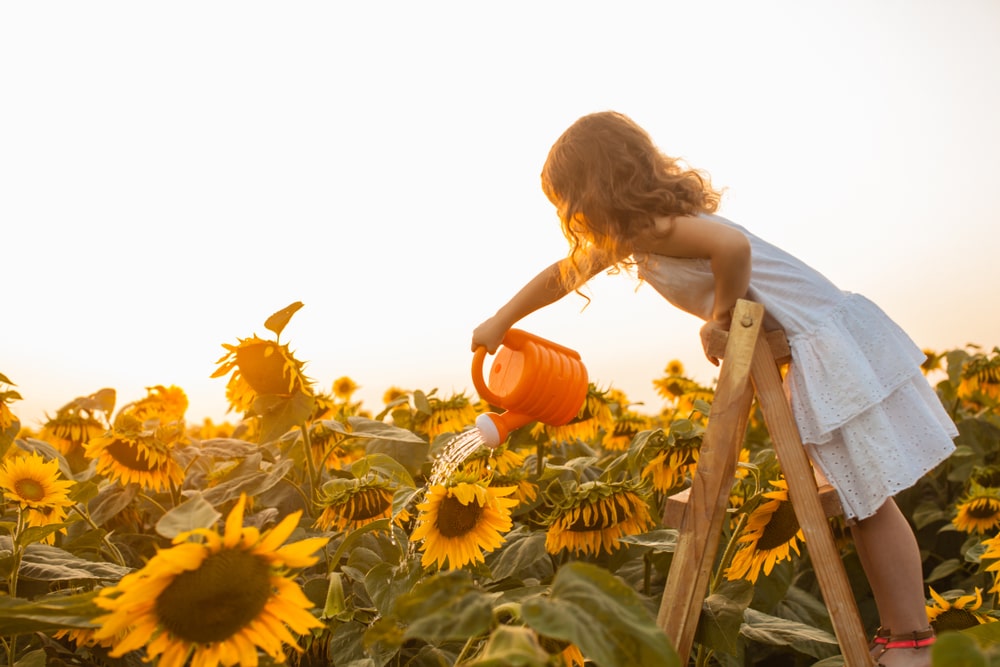 Most dwarf sunflower varieties will require an inch of water each week. You’ll know it’s time to water again with the top half-inch (1.27 centimeters) of soil is dry.

Since sunflowers are drought tolerant, you can wait until the top inch of soil is dry instead. Sunflowers don’t like wet feet, so don’t plant them in areas where water will puddle up.

If you plant them in containers, be sure there are drainage holes at the bottom so excess water can easily drain out.

Containers always need to be watered more frequently than in-ground flower beds, so expect to water more often if you’re using a container.

How To Grow Sunflowers

Growing dwarf sunflowers is easy. You’ll have beautiful flowers popping up in no time! 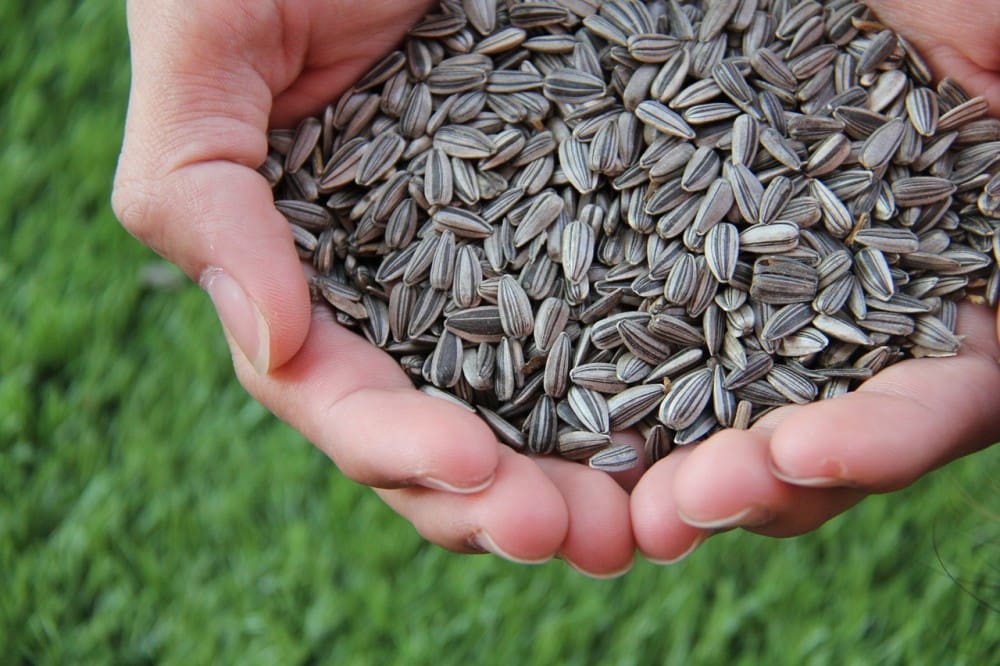 Before you plant dwarf sunflower seeds, prepare the ground or container with suitable soil, as we mentioned above. Plant 2-4 seeds in a half-inch (1.27 centimeters) hole and cover the seeds.

Seed holes should be about 6 inches (15 centimeters) apart from each other. If you have a container, that’s at least 3 gallons, you can fit two or three sunflower seed holes in it.

Water the seeds gently but thoroughly, making sure the top inch or two of soil is wet. Water every day as needed. 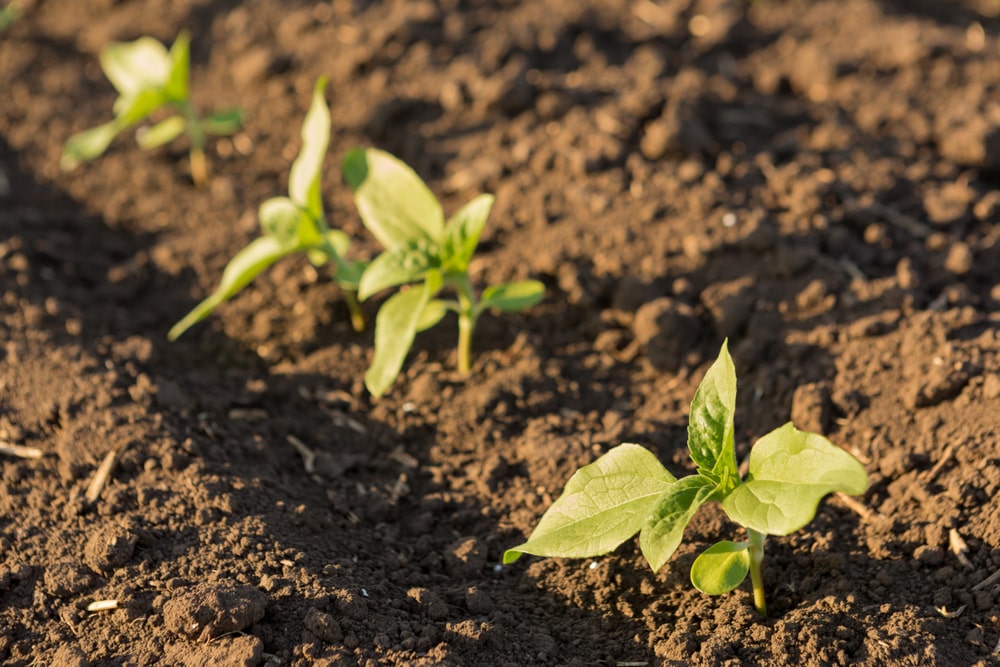 You can thin out the seedlings once they have developed their first set of true leaves. This is technically the second pair of leaves you’ll see since the first pair are the cotyledons.

To thin them out, remove all but the strongest seedling from each group of seeds you planted.

If you’re planting them in a row outside in a flower bed, you may want to thin them so that they’re 1 foot (30 centimeters) apart since they grow to be a little taller when a container does not inhibit them.

Reduce the nitrogen as they approach their full height or they’ll focus on growing leaves rather than growing flowers. Mature dwarf sunflowers won’t require much care aside from consistent watering.

You won’t need to prune them since they don’t usually produce enough foliage, and pruning doesn’t improve how they grow.

It’s normal for sunflowers to lose leaves starting at the bottom as they grow, so there’s no need to worry about their health unless they’re losing leaves up and down the stalk rather than just from the bottom.

You’ll know a sunflower is at the end of its life when all the leaves are dying, petals are falling or shriveling, and the seeds in the flower head look big and are easy to pull out.

Once sunflowers are mature, watch out for birds! Birds love to land on sunflower heads and pick out the seeds.

Dwarf sunflowers aren’t typically grown for seed production, so it’s not the end of the world if birds use your flowers for dinner, but they can make a mess and make sunflowers look unsightly before they’re spent.

Helianthus annuus don’t often suffer from pests and diseases, making them an easy choice to grow in your yard. But, there are still a few things that might pop up from time or time that you should know how to deal with.

Downy mildew, rust, and Alternaria leaf spot are all fungal diseases that can ruin your sunflowers. Downy mildew will look like white webs, and the leaves will be wilted.

They’ll kill seedlings if they become infected. Alternaria leaf spot will have yellow or black spots, and rust will have rusty red spots.

All of these fungal diseases can be prevented by applying fungicides before you see any problems, but they can’t be stopped once they begin, so you’ll have to remove diseased plants.

The banded sunflower moth loves to lay its eggs on sunflowers of any kind. It’s a mostly white or tan moth with a darker band in the middle.

Eggs are laid in the flower head, and young larvae devour the seeds as they grow, ruining your flowers and the hopes of a self-seeded crop next year.

Most insecticides should do the trick, or you can use Bacillus thuringenesis (BT) if you’d prefer a natural way to kill them.

Cutworms are also a threat, but they’re more likely to kill seedlings than full-grown plants. They live in the soil and feast on roots and seedlings. Sunflowers also attract many other types of moths and beetles.

BT or insecticides should be enough to stop them. Sunflowers also attract bees and butterflies that are good to have around, so consider their presence before you apply harmful chemicals to your plants.

Lastly, deer love munching on sunflowers, so if you have deer in your area, you might want to learn how to keep deer out of your garden.