Or, have you looked at home sizes on a real estate website while daydreaming and were curious if homes in other countries were a similar size? Below, you'll find statistics on the average home sizes and floor space for different countries around the world, and some interesting correlations and fun facts from the data! 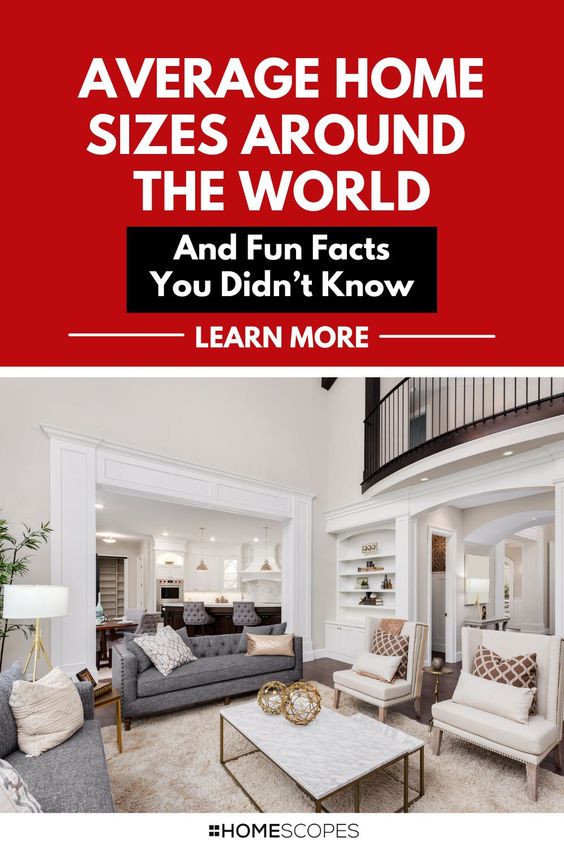 Houses, the way they look, and the size that they are, are influenced by the culture that they exist in. Some cultures that prioritize family have multi-generational houses that are pretty big. Other cultures are more individualistic, or value frugality, so the average home size in those places is going to be smaller.

Other factors in this equation are related to economics and population density. Generally, these two factors have a lot of weight in the average home size of a country. For example, a wealthier country such as France or Canada will have a larger average home size because people in those countries have greater buying and renting power.

But, a country with a very high population density, like Singapore or Hong Kong, will have a smaller home size. This is because these countries have to pack a lot more people in a much smaller area. It seems that, more often than not, population density is a stronger determining factor than wealth is.

For instance, the USA has a higher GDP than Canada but about a 20% smaller home size (by floor space). But, Canada has a much lower population density- 24 times lower(!)- than the United States, Canada ends up with a much greater average home size. While the math is never this simple, there is a clear connection between these factors and average home size! 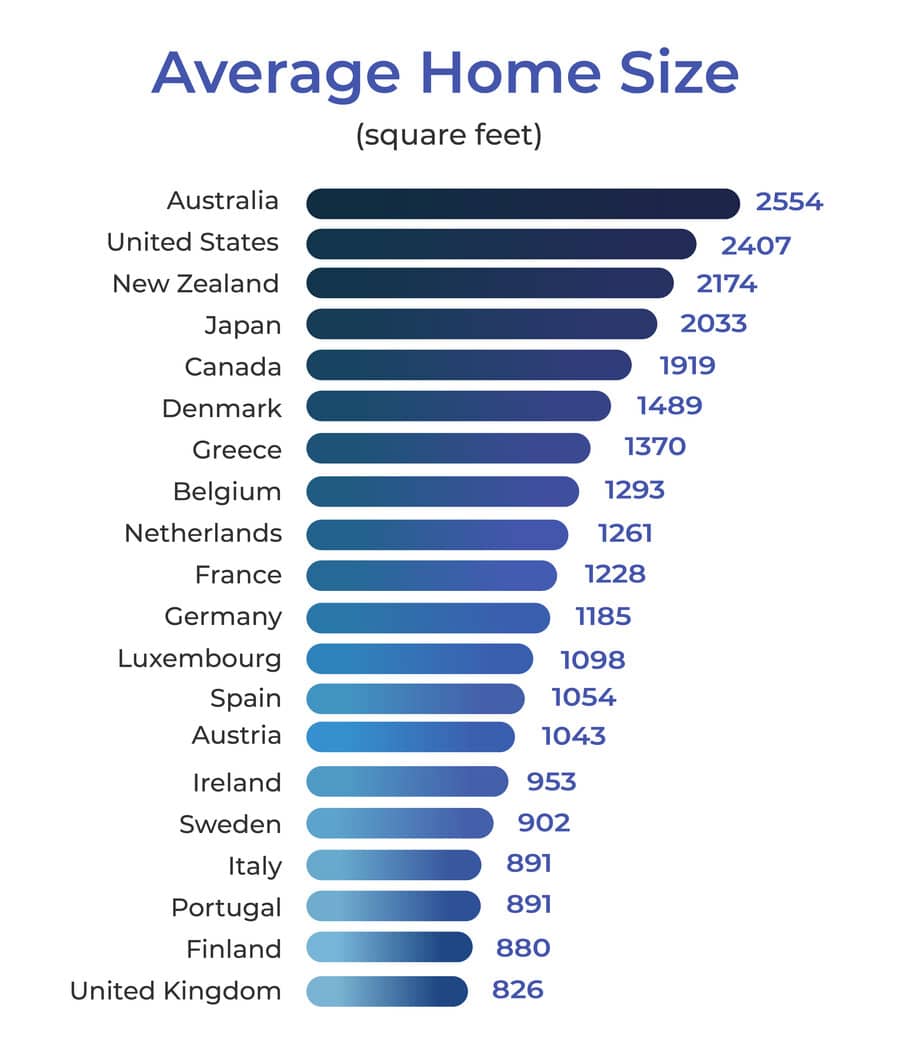 This data comes from the Japanese Statistical Yearbook, from the year 2000. While statistics from 20 years ago might not seem relevant anymore, since we're dealing with houses that can be decades old, the numbers are still fresh enough to be helpful! Let's see what we can learn!

It seems like there is a connection between having a very large average house size and being a growing country. The connection definitely stems from economic development, as we can see from both Japan and the United States being included at the top of the list, in fourth and second places, respectively.

The United States experienced a seismic economic and population boom after World War II, and what was previously a developed but average country was suddenly a world superpower. The United States economy had rarely struggled, but in the post-war years, people of all classes thrived.

This means that people had more buying power than ever, and they used a lot of that buying power on bigger homes. This led to the building of suburbs and the growth of home size over time. This isn't just inference; history backs this up! In the year 1950, the average square footage of a brand new home in the United States was 980.

Japan experienced a similar economic boom in the last few decades. Japan has an engineering and tech sector that has been thriving for years, and this had boosted the economy of the entire country considerably. Today, Japan is one of the wealthiest countries on earth, and home sizes reflect that prosperity!

Australia is number one on this list, with an average home size of over 2500 square feet! Compare that to the mere 890 square feet the average person gets in Portugal- it's almost three times the size. Why are Australian homes so big? It's due in part to the economy and low population density of the country, but those aren't the only reasons Australia has the top spot.

Australia is a country that has sizable rural areas, where homes tend to be cheaper and therefore more likely to be larger. On top of that, Australia has many, many suburbs that are planned out to make room for larger houses. Even though Australia has many dense urban centers, its geographic diversity and economic strength help make it the country with the largest average home size in the world!

Are Suburbs the Key?

Speaking of suburbs, it seems like countries that have a lot of them tend to rank higher on the list. Take Canada, the United States, and Australia for example. These three countries take up most of the top 5 in the 2,000 list, and they all have sprawling suburban areas throughout.

So, what's the connection?

Well, suburbs are different from urban and rural centers in key ways. Urban and rural areas look the way they do because they have to; farms require tons of space, cities require stacking people on top of one another. Suburbs, however, have a lot more flexibility in how they take shape because they're primarily residential; people live there and drive/ride to work.

Suburbs like the ones in the United States and Canada are built on undeveloped land, so developers have the space to make larger and larger homes. On top of that, suburbs are generally conceived of as places for families to live, which means they are necessarily larger.

When you notice that most of the countries that have the largest average home size also tend to be the ones that have a lot of suburbs, the big picture really starts to come together!

This information, published in 2016, takes into account all home sizes in these countries, including apartments. Since apartments are usually much smaller than houses, the numbers feel a bit low. However, there are some interesting things we can learn from the data:

In this 2016 data, Canada had the largest average home size in the world, with an average floor space of 150 square meters. On the opposite end of the spectrum, we see that Hong Kong is in the last place with an average floor space of only 32.9 square meters. That means, according to the data, that the average Canadian home is almost five times larger (455% larger) than the average home in Hong Kong.

Why such a drastic difference?

The evidence is all around! First, Hong Kong has a much higher population density than Canada, meaning people have to be packed into smaller spaces. There simply isn't room for a 150 square meter home for everyone in Hong Kong. It's also a very urban country, so there will be more apartments factored into the average floor space.

Canada is the second biggest country on earth by land area but ranks 39th in population. Therefore, most homes in Canada aren't going to be subject to the kinds of limitations that are present in Hong Kong. There is so much space, and so many suburban and rural areas, that the average home size by floor space is quite large.

The United States is Second, European Countries Close Behind

The United States has an average home size of 130.7  square meters, which is the second-largest in the world. The likely reason for this is that the USA has a much higher population than Canada, making it more likely that homes in urban areas would be smaller.

However, the United States average home size is still four times that of Hong Kong, so it's not like Americans are feeling cramped.

European countries like Italy, Austria, and Germany all have fairly large average home sizes as well. While they're not quite as sprawling as those of the United States and Canada, it's safe to say most people in these countries have room to stretch their legs. Countries like this have a lot of dense urban areas and sparse rural areas, so they fall right in the middle of the back because of that balance.

England has the Smallest Home Size in Europe

We can likely attribute this to England's having the highest population density of any European country on this list!

In this article, we got to look at the different home sizes of countries around the world. While there isn't a complete set of data for every country, it is possible to notice some patterns in home size. Wealthier and less dense countries tend to have the highest home size; dense countries almost invariably have the lowest.

So, how do the numbers stack up to your experience? Do you have any questions, or knowledge about home sizes in countries that we don't have data for? Let us know in the comments section!